The teenager who went against his anti-vaxxer mom’s wishes and got all of his shots at age 18 will be testifying before Congress.

Ethan Lindenberger, of Norwalk, Ohio, revealed in a video uploaded on Saturday that he’s been invited to speak in front of the US Senate Committee on Health, Education Labor, and Pensions.

During the hearing, which will be held on Tuesday, Lindenberger says he will be discussing topics including outbreaks of preventable diseases and the spread of misinformation that may contribute it.

His mother, Jill Wheeler, says she’s proud of her son, despite initially describing his decision to be vaccinated as ‘a slap in the face’. 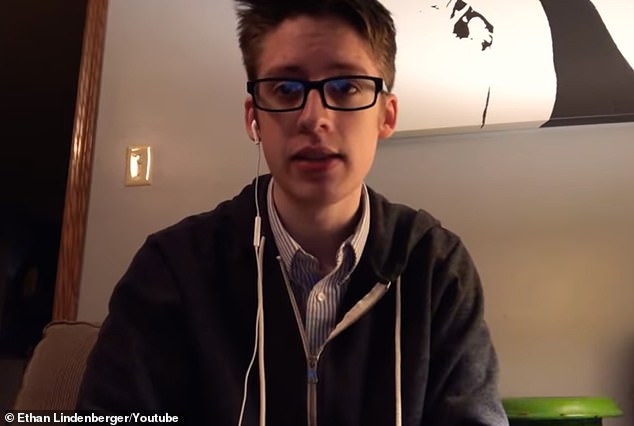 Ethan Lindenberger, 18 (pictured), of Norwalk, Ohio, who grew up in an anti-vaxxer household, revealed in a YouTube video that he has been invited to testify before the US Senate Committee on Health, Education Labor, and Pensions 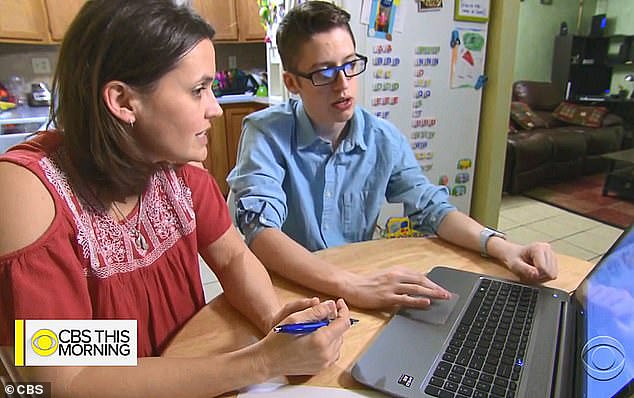 In December, he was vaccinated for hepatitis A, hepatitis B, the flu and HPV.  His mother, Jill Wheeler (pictured, left, with Lindenberger), called the decision ‘insulting’ and a ‘slap in the face’

Lindenberger’s name appears on a list of five witnesses including John Wiesman, Washington state’s secretary of health, and Dr Jonathan McCullers, chair of the department of pediatrics at the University of Tennessee Health Science Center.

‘I’m looking forward to speaking in Washington, DC,’  he says in the YouTube video, which has been viewed more than 7,500 times.

Lindenberger rose to fame after a now-viral Reddit in November 2018, in which he criticized his parents for refusing to vaccinate him as a young child.

His parents are both anti-vaxxers who believe that immunizations cause brain damage and autism.

This is in spite of the fact that these claims have been debunked by countless scientists.

Ohio is one of 17 states that allows non-medical exemptions for vaccines including ‘conscientious objector’ or ‘philosophical/personal beliefs’.

Lindenberger said it wasn’t until he began speaking to his friends that he realized he was the only one who hadn’t received several standard jabs including MMR (measles, mumps, and rubella (MMR), chickenpox and polio.

That’s when he began to do his own research, reading scientific articles and information from the Centers for Disease Control and Prevention (CDC).

reported that Lindenberger visited an Ohio Department of Heath office in Norwalk in December and received vaccines for hepatitis A, hepatitis B, the flu and HPV.

His mother, Jill Wheeler, described the move to online science magazine as ‘insulting’ and a ‘slap in the face’.

But in an interview with , the mother-of-seven admitted she was proud of her son despite the fact that he defied her wishes.

‘I’m very proud of him for standing for what he believes in, even if it is against what I believe. He’s a good boy. He’s a good kid,’ she said.

Lindenberger (left and right) says during the hearing he will be discussing topics including outbreaks of preventable diseases. His name appears on a list of five witnesses 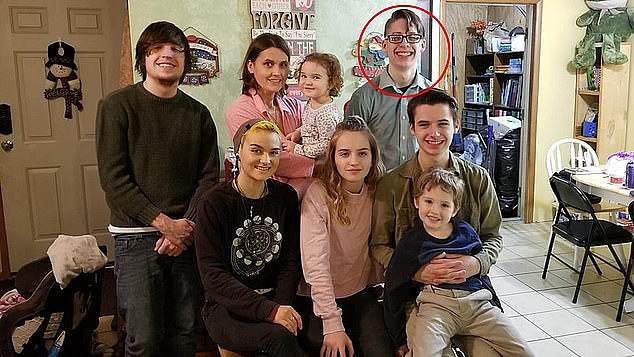 Last week, the House Committee on Energy and Commerce held a hearing during which heads of federal health agencies discussed the measles outbreak that has been spreading across the US. Pictured: Lindenberger (circled) with his mother and his six siblings.

Vaccines have become a hot button issue over the last several weeks.

Last week, the House Committee on Energy and Commerce held a hearing during which heads of federal health agencies discussed the measles outbreak that has been spreading across the US.

So far, 206 cases of measles have been confirmed in 11 states, hitting New York and the Pacific Northwest the hardest.

That means more measles cases have been counted in the first two months of this year than in all of 2017.

At the hearing, Dr Anthony Fauci, infectious diseases chief at the National Institutes of Health, said the measles vaccine is highly effective and the fact that cases are on the rise ‘is really unacceptable’.

He believes the spreading of misinformation about jabs has left many parents vaccine hesitant and, therefore, have raised their child’s risk of catching life-threatening diseases.

‘Misinformation is an important problem,’ Dr Fauci said, according to .

‘The spread of misinformation that leads people to make poor choices, despite their well-meaning, is a major contributor to the problem we’re discussing.’

Anti-vaxxers were named one of the top threats to global health in 2019 by the World Health Organization (WHO).

‘Vaccine hesitancy’, as the WHO calls it, ‘threatens to reverse progress made in tackling vaccine-preventable diseases.’