Rand Paul, the junior senator from Kentucky, said Monday evening that at least ten Republicans are planning to cross the aisle when the resolution that passed in the House comes for a vote in the United States Senate.

‘I think there will be 10 Republican “no” votes. Possibly more,’ he told reporters. ‘Governments that begin to be run by emergencies, really bad things can happen.’ 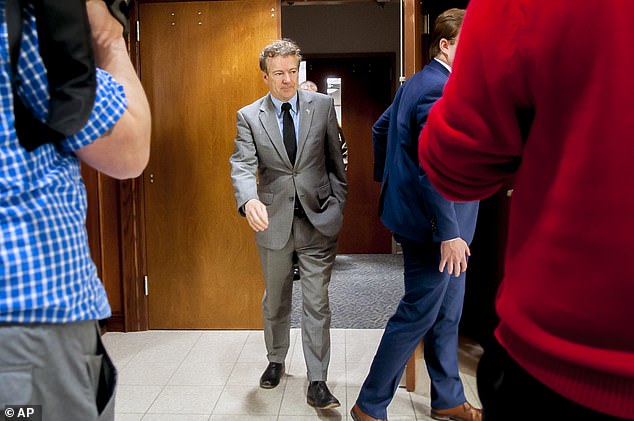 Paul was the fourth GOP senator to say he would defy the president’s border emergency on the grounds that Trump action that many lawmakers believe was beyond the powers granted to him by Congress.

Sens. Susan Collins, Lisa Murkowski and Thom Tillis announced their plans to vote ‘no’ on the emergency last week.

Other senators have suggested that Trump exceeded his authority without committing themselves one way or the other to a position on the resolution.

Sen. Mitch McConnell predicted Monday that the legislation would pass and be vetoed and there would not be enough Democratic support to override it.

The resolution is expected to come to the floor before the next congressional recess in mid-March.

Several reliable Republicans suggested to DailyMail.com that they were uncomfortable with the expansion of executive authority dating back to Barack Obama’s executive actions on immigration, although they did not explicitly say they’d vote for the bill that would effectively curb it.

‘I am very worried, prudential, about the slippery slope that could occur … emboldening future presidents to implement radical policies, contrary to law and contrary to the Constitution,’ Sen. Ted Cruz, a Texas conservative, told a group of reporters.

Sen. Lamar Alexander suggested on the floor of the Senate that Trump issue a course correction.

‘I want to make a respectful suggestion and that is that President Trump ask his lawyers to take a second look at existing funding authority that the president has,’ he said.

The president warned in an interview with Sean Hannity on ‘Fox News’ that Republicans who vote against border security measures are risking their political careers.

Trump did not threaten lawmakers outright in the interview from Vietnam where he was holding a nuclear summit at the time. And he hasn’t returned to the subject since on social media.

Alexander is retiring at the end of his current term and has little to lose by participating in a rebellion against Trump.

Republicans who do have to seek reelection have said they want to see what funds he’s proposing to tap into within the Department of Defense.

Sen. John Cornyn, a member of the Senate GOP leadership team, said more than once that the ‘larger issue’ is that Congress has ‘delegated its authority to the White House in hundreds of instances – and this is just one example.’

‘I think we need to have a bigger conversation about the separation of powers, and whether we want to delegate all this authority to the next president, as well as this president,’ he declared.

President Trump is likely to issue the first veto of his presidency in response to the legislation.

‘Oh, we’ll be fighting,’ he told Hannity after the Fox host made note of the 13 GOP defections in the House.

In the Senate, members of the president’s party appeared ready to reject his national emergency, as well, with Paul putting the final strike on the list.

He claimed Monday to reporters that a quiet rebellion was growing in the party, when it comes to executive authority.

The White House did not have a comment Tuesday on the senator’s assertions. 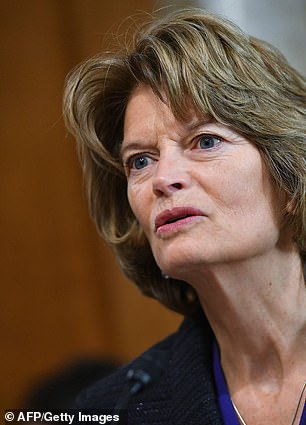 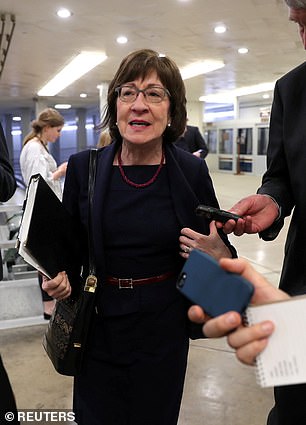 Sens. Susan Collins, Lisa Murkowski and Thom Tillis announced their plans to vote ‘no’ on the emergency last week

Cruz told DailyMail.com last week had spoken to the president about the issue and ‘time will tell’ whether the White House will be able to swing enough Republican lawmakers to sustain a veto.

Cornyn, the GOP’s vote counter until earlier this year, suggested that Democratic lawmakers would not be able to muster enough support to cancel it.

Even with ten GOP votes, the legislation would be well under the 66 votes, or two-thirds majority, it would take to override a veto in the Senate.

Assuming all 47 Democrats vote to stop the resolution, plus ten Republicans, that would leave those opposing it nine votes shy of what is needed.

Paul did not say who the senators he had in mind were outside of himself and the other three who have been vocal about their opposition, and his office did not respond to a request for clarification on Tuesday morning.

He made the comments to reporters after he announced his position at a Kentucky dinner over the weekend.

‘I can’t vote to give extra-Constitutional powers to the president,’ Paul told a crowd of at the Southern Kentucky Lincoln Day Dinner Saturday night, according to the .

He said: ‘I can’t vote to give the president the power to spend money that hasn’t been appropriated by Congress,’ he said. ‘We may want more money for border security, but Congress didn’t authorize it. If we take away those checks and balances, it’s a dangerous thing.’ 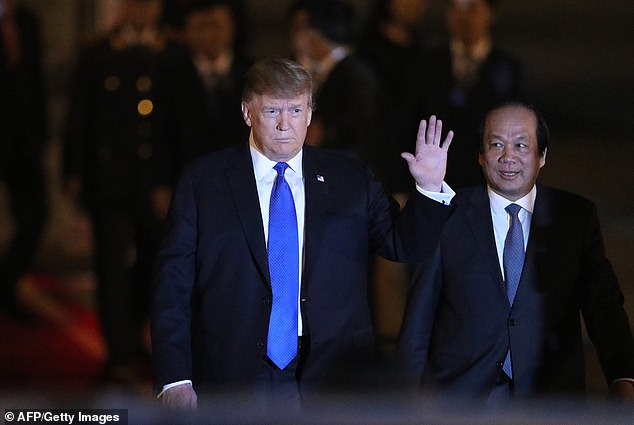 President Trump has threatened to veto a resolution that would take away his use of emergency powers to build his border wall; it would be the first veto of his presidency 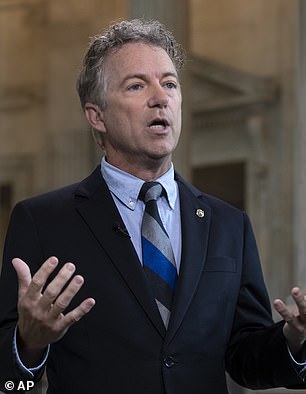 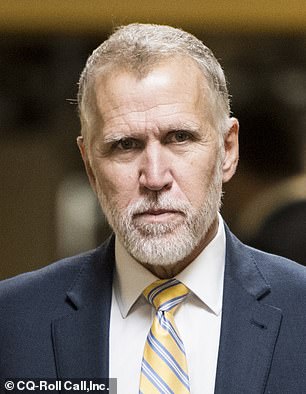 Democrats have used the GOP’s own arguments against executive authority against them as they mounted a case against Trump’s national emergency.

‘This isn’t about the border. This is about the constitution of the United States,’ House Speaker Nancy Pelosi said last week before her chamber took a vote.

The resolution passed the House 245-182 last Tuesday, with 13 Republicans joining Democrats in their support.

That number is short of the 290 votes that would be needed to override a veto, but it did move the measure to the Senate. 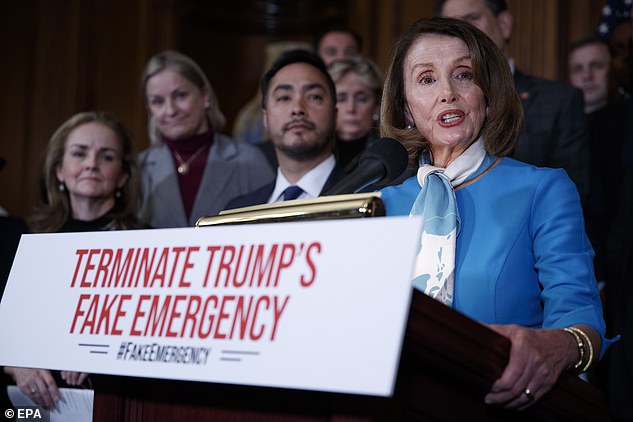 House Democrats, led by Speaker Nancy Pelosi (above), voted to block the president’s move to build his border wall on Tuesday night

The congressional battle is the latest chapter in a long-running war between Trump and Democrats over border security, immigration policy and the border wall that Trump has pledged to build since becoming a presidential candidate.

He originally promised that Mexico would pay for it, but after Mexico refused, he asked U.S. taxpayers to foot the bill for the project, which Democrats call unneeded and ineffective.

In his first two years in office, Trump’s Republicans controlled both chambers of Congress, which under the U.S. Constitution holds the national purse strings, but lawmakers failed to provide the funding Trump wanted for his border barrier.

When Congress, with the House now controlled by Democrats, refused in recent weeks to provide the money he wants, Trump declared an emergency and vowed to divert funds toward the wall from accounts already committed by Congress for other purposes.

That set up a test of the constitutional separation of powers between Congress and the presidency that will likely lead to a court challenge after lawmakers deal with the resolution.

A coalition of 16 U.S. states led by California has already sued Trump and top members of his administration in an attempt to block his emergency declaration.

Trump declared the emergency after Congress declined his request for $5.7 billion to help build the wall.

Congress this month appropriated $1.37 billion for building border barriers following a battle with Trump, which included a 35-day partial government shutdown – the longest in U.S. history – when agency funding lapsed on Dec. 22.

Meghan Markle's mom Doria, 61, 'is making ready to MOVE to Britain as quickly as subsequent month'
Senator John Cornyn slammed tweeting Not #Beers4Brett but #BubblyforBrett after Kavanaugh sworn in
Killer who beheaded two women and set fire to their home sentenced to 60 years in prison
Trump blasts media for making up stories as he also slams Mueller's team for 'illegally' leaking
Sarah Jessica Parker went to Sex & The City producers over 'big movie star's inappropriate behav...
JP Morgan CEO tells employees he is 'disgusted by racism' in memo after discrimination report
Tracey Cox reveals how to freshen up your love life ahead of the New Year
Katie Holmes, 41, confirms romance with restaurateur Emilio Vitolo Jr., 33