A tornado which tore through parts of Alabama, killing at least 23 people, was so powerful it ripped a billboard from its display and carried it 20 miles into a different state.

The billboard, which initially stood atop a pole just north of Smiths Station, Alabama, was torn from its spot and sent airborne.

The huge sign was then carried 20 miles from U.S. Route 280, landing in Harris County, Georgia.

The billboard is an advertisement for the Lee County Flea Market.

The image above shows a billboard that was ripped from its pole in Lee County, Alabama on Sunday and sent airborne some 20 miles until it landed in a yard in Harris County, Georgia

The billboard is an advertisement for a local flea market in Lee County, Alabama 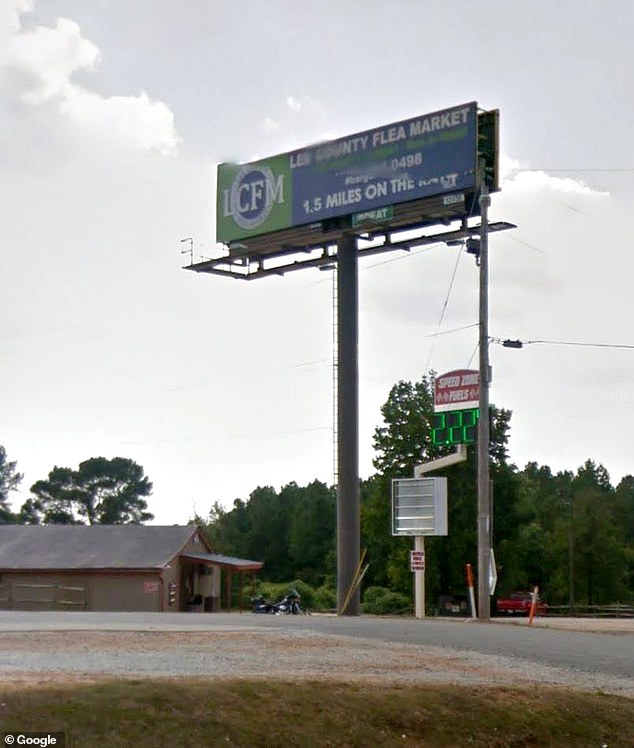 A Facebook account belonging to the flea market posted a message on Monday, saying: ‘Our sign on the billboard located at Buckwild Saloon landed intact in Hamilton, Georgia in a friend’s yard.’ The billboard is seen above before the tornado hit on Sunday 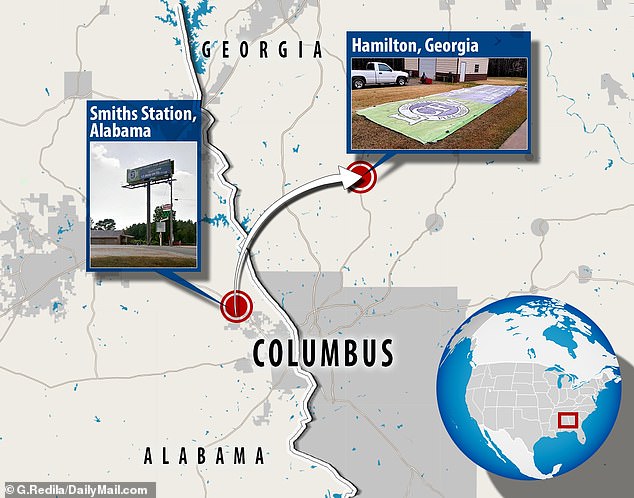 The map above shows the distance between Smiths Station, Alabama and Hamilton, Georgia

A Facebook account belonging to the flea market posted a message on Monday, saying: ‘Our sign on the billboard located at Buckwild Saloon landed intact in Hamilton, Georgia in a friend’s yard.’

The friend wrote on Facebook that they were amazed how a sign that size could travel that distance with only minimal damage caused.

Lee County is recovering from the damage caused by tornadoes over the weekend.

Residents and rescue teams on Monday sifted through the splintered remnants of homes torn apart by a string of tornadoes that killed at least 23 people, including three children, in the deadliest burst of twisters to hit the U.S. since 2013.

The tornadoes, spawned by a late-winter ‘supercell’ thunderstorm, ripped through Lee County on Sunday with cyclonic winds of up to 170 miles per hour, at step four of the six-step Enhanced Fujita (EF) scale of tornado strength.

Mobile homes were tossed on their sides and ripped open, their contents strewn over a ravaged landscape littered with debris and gnarled, uprooted trees.

In some places, shreds of houses hung from the limbs of the few trees left standing.

‘It looks almost as if someone took a giant knife and just scraped the ground. There are slabs where homes formerly stood, debris everywhere, trees are snapped,’ Lee County Sheriff Jay Jones told a morning news conference.

At least three twisters struck the area, in eastern Alabama near the Georgia border, within a few hours on Sunday afternoon.

The worst of the damage and all of the known fatalities occurred in and around the tiny community of Beauregard, about 10 miles southeast of Auburn, said Chris Darden, chief meteorologist for the National Weather Service office in Birmingham. 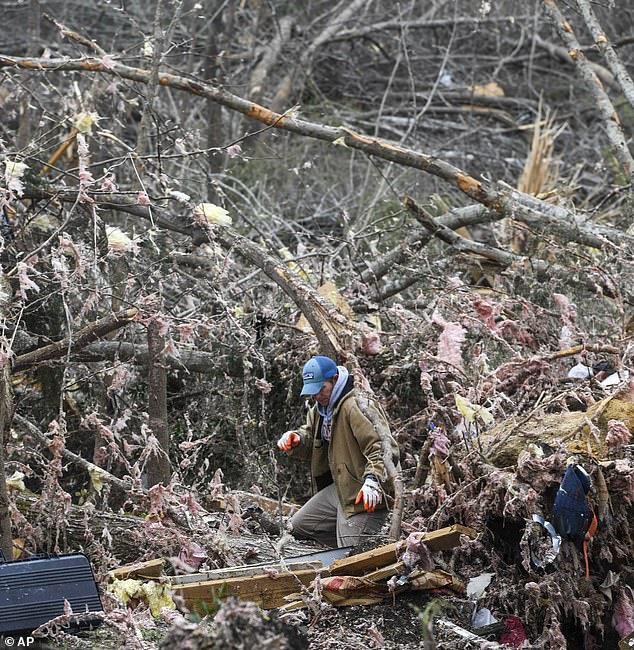 Rescuers in Alabama resumed search operations on Monday morning after at least two tornadoes killed 23 people, uprooted trees and caused ‘catastrophic’ damage to countless buildings and roads. A man is seen surveying the damage at his home 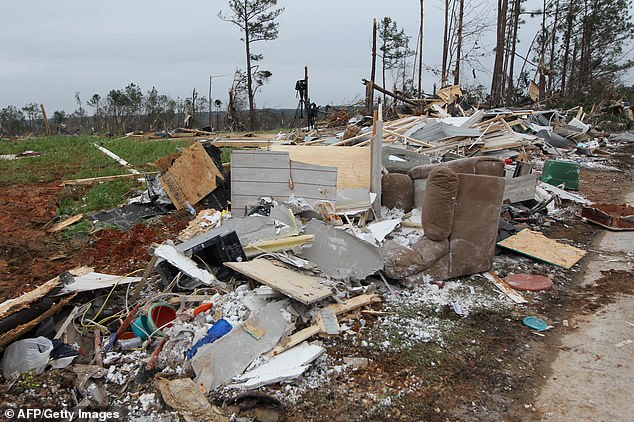 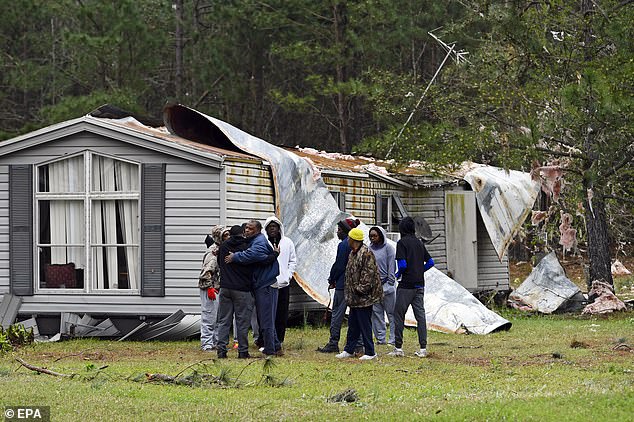 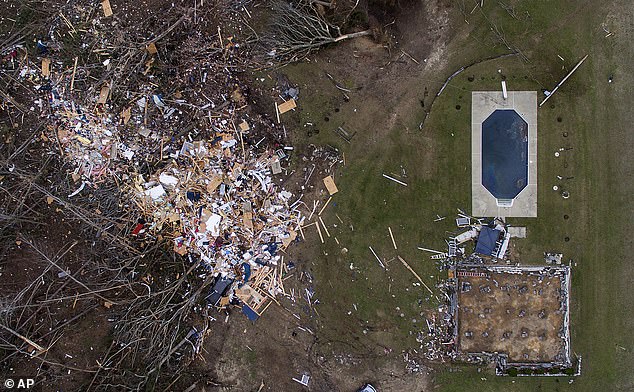 Besides one EF-4 tornado, storm trackers have confirmed two smaller twisters classified as EF-1, each of which packed winds of up to 110 mph, according to Darden.

In addition to 23 confirmed deaths, more than 50 people were reported injured, authorities said, marking the greatest loss of life from a tornado since an EF-5 storm tore through Moore, Oklahoma, in May 2013, killing 24 people and injuring 375 others.

Three of the dead were children, ages 6, 9 and 10, County Coroner Bill Harris said at an afternoon news conference.

An initial canvass of the stricken area turned up no additional bodies, but Jones left open the possibility that more victims could be found once the search was completed.

Darden said in an interview that ‘a few people’ remained unaccounted for, though he said he did not know the precise number.

All the dead were in the Beauregard area, he said.

All but six of the victims were identified, and investigators think they know the identities of the others, Harris said.