Thousands of people have tried to become stem cells donors in a record-breaking bid to save the life of a five-year-old boy with cancer.

Oscar Saxelby-Lee, from Worcester, inspired a total of 4,855 people to go to a testing drive to see if they were a match and could help cure his leukaemia.

Doctors say the schoolboy has just three months to find a donor from whom they can take blood cells to treat Oscar’s acute lymphoblastic leukaemia (ALL).

He has already had chemotherapy since being diagnosed in December, but will need more aggressive treatment in order to overcome the disease. 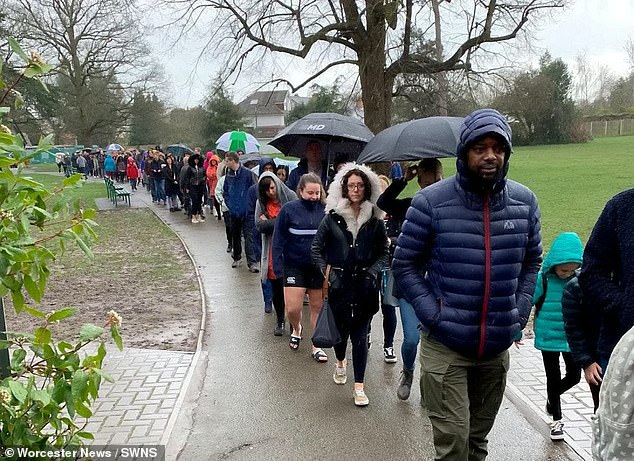 Nearly 5,000 people turned up for a registration event to see if they could be a stem cell match for Oscar Saxelby-Lee, who needs a donor within the next three months to be able to fend off his leukaemia 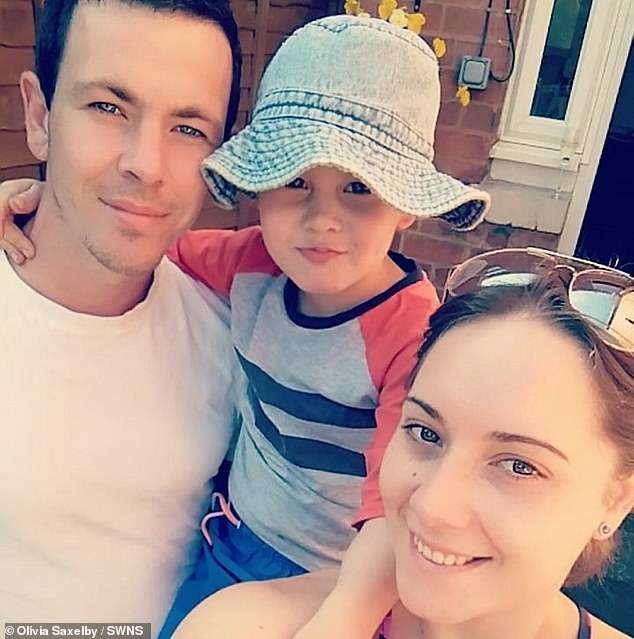 Oscar, pictured with his parents, Jamie and Olivia, needs a stem cell transplant to try and cure his acute lymphoblastic leukaemia

Oscar’s parents first became concerned when they noticed unexplained bruising on their son’s body, and in December were told he had ALL.

The family is now in a race against time to find someone who can donate blood stem cells to replace the diseased white blood cells making Oscar ill.

And crowds of people turned up to an event at Pitmaston Primary School, in Worcester, over the weekend to see if they could be a match.

The charity which tests the swabs, DKMS, said its previous record for a single event was 2,200 – meaning Oscar’s more than doubled that.

Oscar’s teacher Sarah Keating said: ‘I’ve been teaching for 20 years and I’ve never had a child go through something like this.

‘You hear about children getting cancer and you think “that’s dreadful”, then you move on. In this case we haven’t moved on, we will fight this.’

And his teaching assistant Laura Senter, 22, said his diagnosis came as a shock to their class.

She added: ‘I couldn’t believe it. I saw him before Christmas and he was his usual happy-go-lucky self. 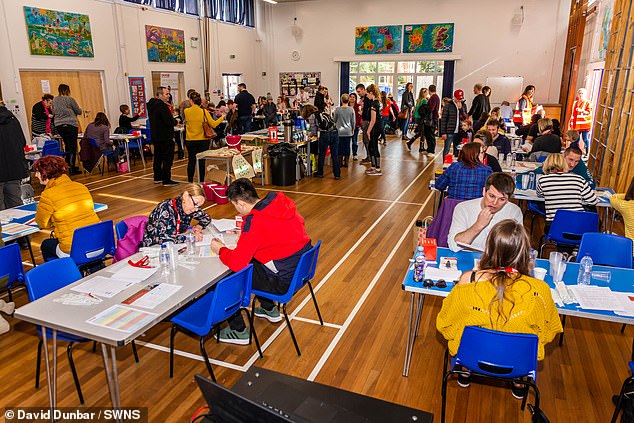 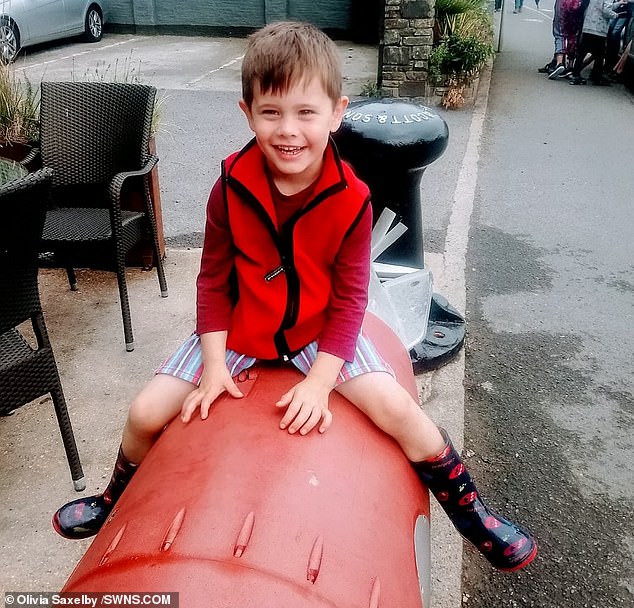 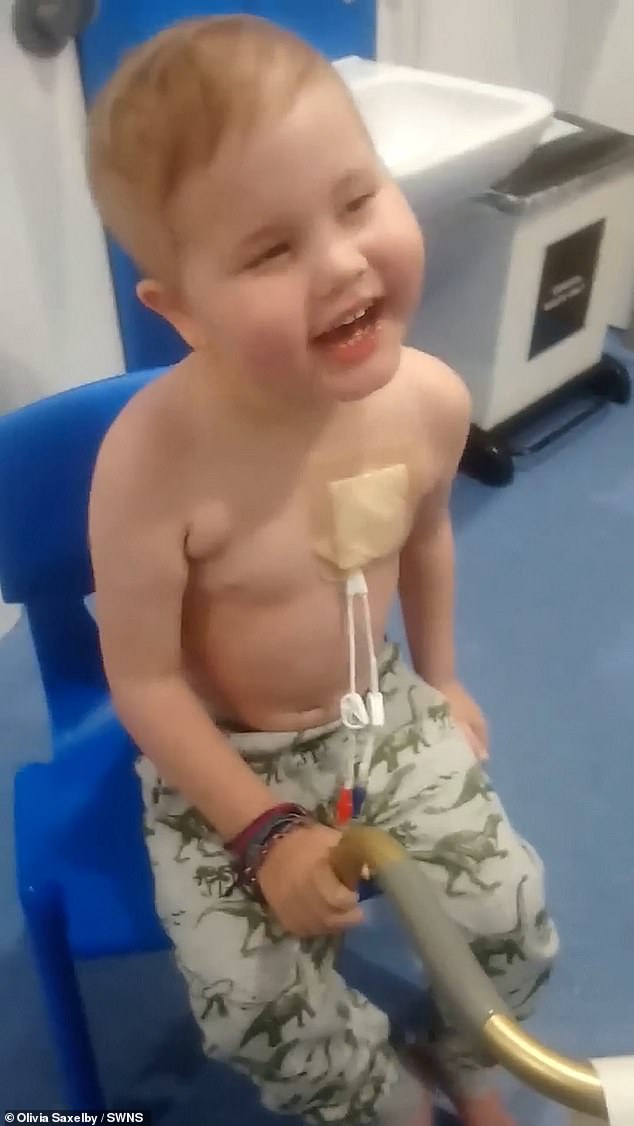 Oscar has already had chemotherapy in a bid to control his disease, which is a cancer of the blood cells, but he will need more advanced treatment to get rid of the leukaemia completely

‘It’s a nightmare for this to happen. You can’t really do anything about it, it’s heart-breaking.

‘We have gone into action mode to try and find a donor.’

Volunteers queued outside in the rain and took over two of the school’s halls for the weekend, handing out swabs and completing donor registration forms.

Mr Senter added: ‘I visited Oscar in hospital last month when it was his birthday.

‘All the parents bought gifts for him.

‘Because of all the chemo he was very swollen but you could tell he was very much still him inside.

‘When we came out we knew we needed to do everything we could to support him.’ 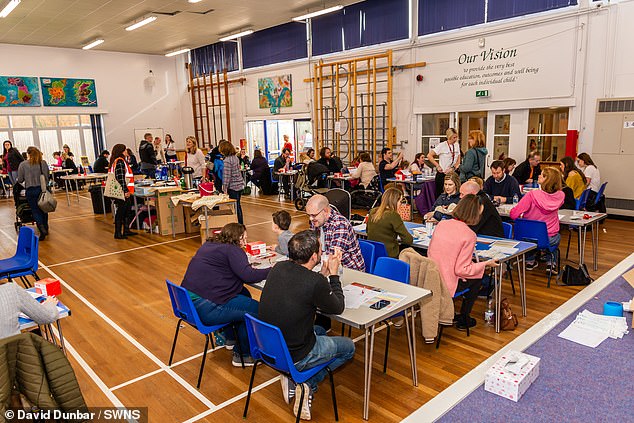 The charity which tests swabs collected at the stem cell donor registration events, DKMS, said its previous record for event was 2,200 people, meaning the turnout for Oscar’s more than doubled the record 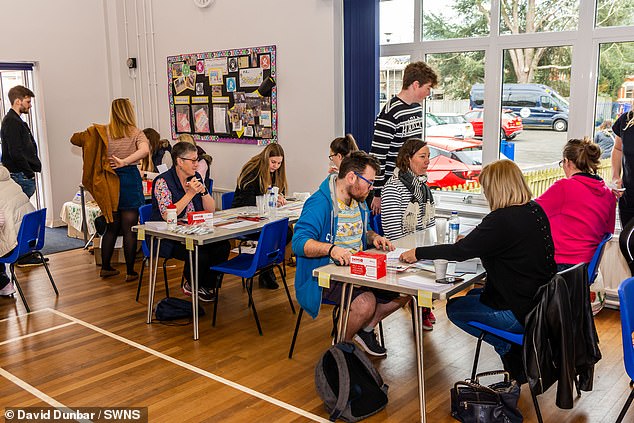 The session happened after Oscar’s parents, Olivia Saxelby and Jamie Lee, launched their ‘Hand in Hand for Oscar’ appeal to try and get as many people as possible to sign up 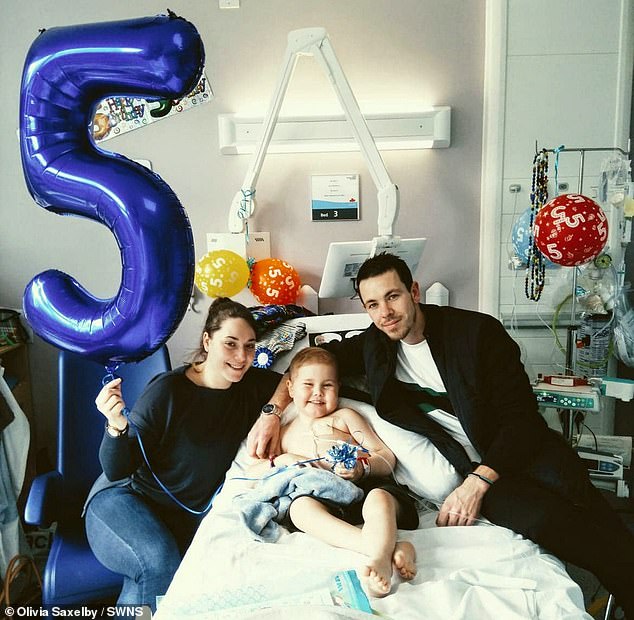 Oscar’s mother, Olivia, said: ‘Oscar is a fun, loving, energetic five-year-old boy who deserves to live to the full alongside the other troopers fighting such horrific diseases’

His desperate parents Olivia Saxelby and Jamie Lee, of St Johns, Worcester, launched an appeal to find a match after his diagnosis.

They aimed to get as many people as possible to sign up to a blood stem cell donor register as part of a campaign called ‘Hand in Hand for Oscar’.

Olivia, 23, said: ‘We felt like we could not see light at the end of the tunnel, but when looking at Oscar’s cheeky smile, bravery and determination, we managed to pull our strength together again.

‘From that moment of fear and confusion, we as a family became stronger than ever. Oscar reminded us how to fight again and just how courageous he is.

‘Not once has he shown weakness, nor has he ceased to amaze us throughout the most difficult times and that to us is a true warrior.

‘Oscar is a fun, loving, energetic five-year-old boy who deserves to live to the full alongside the other troopers fighting such horrific diseases.

‘Not only does he need to enjoy a normal life a child should live, he now needs someone else to save him.’

WHAT IS ACUTE LYMPHOBLASTIC LEUKAEMIA?

Acute lymphoblastic leukaemia (ALL) is a type of blood cancer that starts from young white blood cells in the bone marrow.

Anyone can develop ALL, however, it mainly affects younger people.

Many ALL symptoms are vague and flu-like, such as:

Risks for developing ALL include exposure to radiation, smoking, being overweight and having a weak immune system.

Research suggests being breastfed and exposed to childhood infections may reduce a person’s risk.

The main ALL treatment is chemotherapy. Patients may also have radiotherapy, steroids or bone marrow transplants.

Dianne Buswell 'KISSED Joe Sugg during a boozy night out three weeks ago'
Leading scientists declare the world isn't ready for gene-edited babies
Disgraced Labour MP Kate Osamor says she is 'proud' to live in a council house
Best and worst April Fools' Day pranks across UK from Brexit to police
Schoolboy's condition means he's in danger of suffering a stroke every time he gets excited or tired
Armed robbers 'held a knife against a 10-year-old girl's throat and stole eight bulldog puppies'
Brittany Murphy's half-brother says she was murdered
MARTIN SAMUEL: Maria Sharapova turned in some Oscar-worthy performances in her time