will today pledge to funnel nearly £1billion to ‘left-behind’ towns in the North and Midlands as part of a package of ‘bribes’ designed to persuade Labour MPs to back her deal.

The Prime Minister will unveil details of the new Stronger Towns Fund as she launches intensive efforts to woo Labour MPs in pro-Brexit seats.

The proposals will see £1billion allocated directly to towns in England. Details of the towns involved were not available last night, but 90 per cent of the cash is being allocated to areas in the North and Midlands. 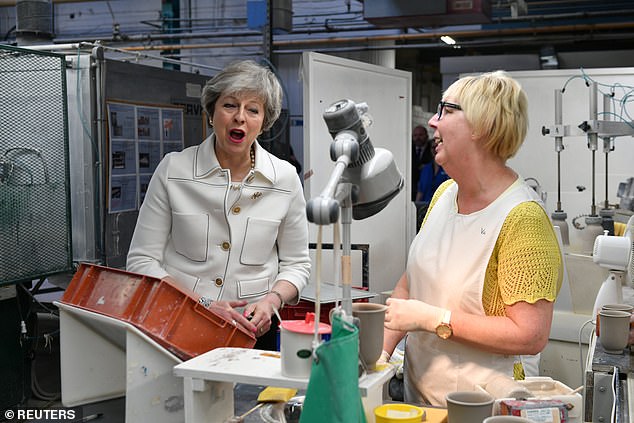 A further £600million will be made available for towns across the country to bid for. The decision over the £1.6billion fund follows weeks of talks between ministers and backbench Labour MPs unhappy at their party’s attempts to frustrate Brexit.

Later this week, the Government will also unveil a new Workers’ Rights Bill designed to meet their demand to protect workplace rights after Brexit.

Is a ‘Brexit deal dividend’ on the way?

The Chancellor could be poised to increase public spending as part of a ‘Brexit deal dividend’ if MPs back the Prime Minister’s Brexit deal.

Philip Hammond has reportedly pledged to plough billions of pounds into the public purse if a no deal Brexit is averted.

In last year’s October budget, he said some of the £15.4bn set aside may have to be used in the event of no deal.

But buoyed by strong tax revenue, the Treasury could be given more room to increase public spending later this year, the Financial Times reported.

Treasury officials told the paper there will be no changes to spending or tax in next week’s Spring Statement, which will be announced in the midst of a series of Brexit votes.

In October 2018, the Chancellor said there would have to be a new Budget outlined if Britain left the EU without a deal.

Mrs May said last night that the new fund was needed to help parts of the country that had been left behind. ‘For too long in our country prosperity has been unfairly spread,’ she said.

‘Our economy has worked well for some places but we want it to work for all communities.

‘Communities across the country voted for Brexit as an expression of their desire to see change – that must be a change for the better, with more opportunity and greater control.

‘These towns have a glorious heritage, huge potential and, with the right help, a bright future ahead of them.’

The money will be used for improving infrastructure and putting in place retraining schemes for people in traditional industries that have closed down.

Downing Street rejected claims that the cash amounted to ‘bribes’, saying Mrs May had long believed in the importance of not allowing parts of the country to get ‘left behind’.

But critics accused the Prime Minister of offering cash in return for votes. Former Tory minister Anna Soubry said people would ‘see this fund for what it is – a desperate measure to buy votes’.

Miss Soubry, now Brexit spokesman for the Independent Group of MPs, added: ‘The support of the DUP was secured with a £1billion bung for votes to prop up the Government after it lost its majority. 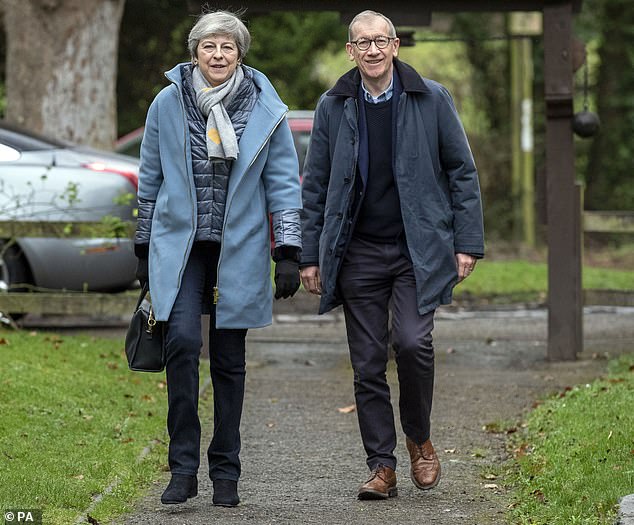 ‘Now Theresa May is so desperate to get votes for a bad EU withdrawal agreement she is relying on the same old trick. Voters will not be fooled.’ 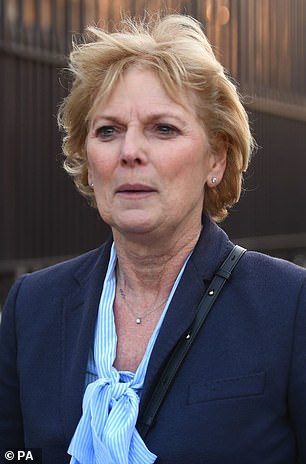 The money is heavily weighted towards traditional Labour heartlands. While the North West will receive £281million, the South West is in line for just £33million, and the East of England receives just £25million.

Former Labour Cabinet minister Ben Bradshaw urged his colleagues to resist the offer. Mr Bradshaw, the MP for Exeter, said: ‘Why on earth would a Labour MP trust the Tories on this? They have consistently hammered our left-behind communities.

‘If Brexit goes ahead this month, the Tories will dump May, put in a hard Brexiteer and any earlier promises will become worthless.’

Simon Clarke, the Brexiteer Tory MP for Stockton-on-Tees, welcomed the new fund, but warned that it would not persuade him to back the deal in the parliamentary vote, expected on March 12.

‘It’s fantastic news that the Government is investing in Teesside,’ he said. ‘Local people are looking forward to our leaving the EU and this will further boost jobs and growth. 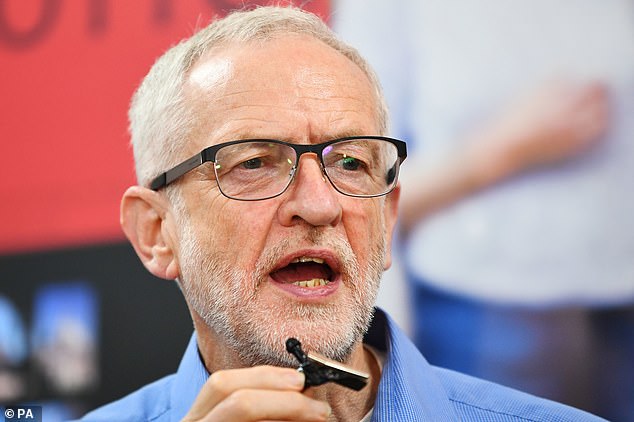 At least 70 Labour MPs are said to have deep concerns about Jeremy Corbyn’s decision to back a second referendum. He is pictured during a visit to a mosque in North London yesterday

‘What this money won’t do, however, is buy any votes in Parliament. I am determined to deliver a proper Brexit, which means fixing the [Irish] backstop, while all the local Labour MPs are unapologetically in denial about the need to leave the EU at all.’

Allies of Mrs May believe she needs to win over at least 30 Labour MPs to cancel out the votes of Brexit hardliners on her own side who will not vote for any deal she brings back.

Downing St last night played down reports that the Attorney General Geoffrey Cox has abandoned efforts to secure an end date to the backstop or a unilateral exit mechanism for the UK.

One report claimed that, with the EU refusing to back down, Mr. Cox was now seeking an enhanced ‘arbitration mechanism’ instead – a result likely to fall short of eurosceptic demands.

But a No 10 spokesman said: ‘The Attorney General continues to pursue legally binding changes to the backstop that are necessary to ensure it cannot be indefinite. We will not however comment on the specifics of the negotiations at this critical stage.’

Half of these might be persuaded to back Mrs May’s deal in return for concessions.

‘I don’t support bowing out without a deal and if it’s a choice between the improved deal and No Deal, I think we should seriously consider supporting an improved deal,’ she told Sky News.

Miss Flint, the MP for Don Valley in South Yorkshire, added: ‘I think there are something like 60 or 70 Labour MPs who feel as strongly as I do against the second referendum but many of those MPs also feel that we have to move on, we have to stop a No Deal and if there’s an improved offer on the table, Labour should engage with that sincerely. I think if there was a free vote, a number – tens, 20s, 30s – would vote for an improved offer, I think that’s the reality.’

The Workers’ Rights Bill is expected to guarantee that existing workplace protections given by EU law remain in place after Brexit.

Similar protections will also be guaranteed on health and safety laws and environmental regulations.

Mrs May has refused Labour demands for ‘dynamic alignment’ with EU laws, which would require the UK to automatically adopt new Brussels regulations in these areas after Brexit. But she has agreed to legislate for Parliament to have an automatic vote on whether to adopt new EU laws – putting control in the hands of MPs.

However, Brexit Secretary Steve Barclay has questioned the wisdom of going so far. Ministers are also expected to agree a side deal with the trade unions over their longstanding demand to be allowed to hold online ballots for strike action, rather than continuing to rely on postal ballots.

It’s ‘death cult vs the zombies’! Tory Brexit civil war descends into a slanging match ahead of crunch vote

The Tories’ Brexit civil war descended into a slanging match yesterday after hardliners were branded a ‘death cult’ and a minister warned delaying the UK’s leaving date would plunge Britain into a ‘zombie world’.

As pressure builds ahead of the crunch vote on Theresa May’s Brexit deal on March 12, an ally of the Prime Minister is said to have taken an extraordinary swipe at the European Research Group (ERG) of Eurosceptic Conservative MPs. 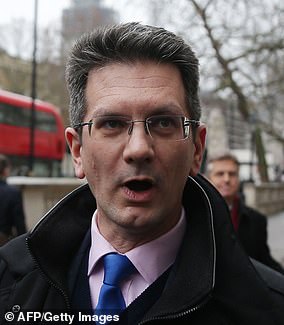 Steve Baker has called the comments ‘appalling, unnecessary and  unhelpful’

A Downing Street insider described the group, which has more than 60 members, as a ‘death cult… growing around ERG deputy leader Steve Baker’, The Sunday Times reported.

The description of the ERG as a death cult – a term more usually associated with terror groups such as Islamic State – drew an angry response from Mr Baker, who heard of it while helping out at his local church in High Wycombe, Buckinghamshire.

Mr Baker said: ‘Bearing in mind I am on duty at church this morning, I deeply regret that Downing Street is reported to have told The Sunday Times of a ‘death cult’ around me.

‘How appalling, unnecessary and unhelpful.’

No 10 has grown increasingly frustrated by the hardline stance adopted by some Brexiteers, who have been nicknamed ‘ultras’.

Yesterday, Government sources denied the ‘death cult’ comment was made by anyone at No 10, after which Mr Baker said he was ‘glad to have received clarification’.

On the other side of the debate, pro-Remain justice minister Rory Stewart hit out yesterday at those pushing for a Brexit delay.

Mr Stewart said extending Article 50 – the formal process for the country’s departure from the EU – for a couple of months would ‘achieve nothing’.

He told Sky News: ‘It would put us in a world in which we were still a zombie world, not knowing where we’re going and it would increase the chance of other options.

It would increase the chance of people either pushing for a general election which wouldn’t solve everything, for another referendum which I think would solve nothing at all.

‘It would just tell us what we already know, which is that the country is divided, or it would push people towards a customs union which would stop us being able to trade with the rest of the world.

‘So all these other options are worse options.’