Her official debut took place 50 years ago, on March 1, 1969 — St David’s Day — when she handed out leeks to the Welsh Guards at Pirbright Camp in Surrey.

Wearing a short, spring-green coat and a red and gold peaked military-style hat with a gold chain at the front, Princess Anne stepped on to Elizabeth Barracks, braving a biting north-easterly wind, to present the Welsh national symbol to the guardsmen.

An important ceremonial occasion certainly, but hardly the most glamorous of royal or public duties. Yet since then she has never stopped, carrying out up to five engagements a day and clocking up more than 20,000 in total — that’s 400 plus a year — many on behalf of the 340 charities and causes of which she is either president, patron or a member. 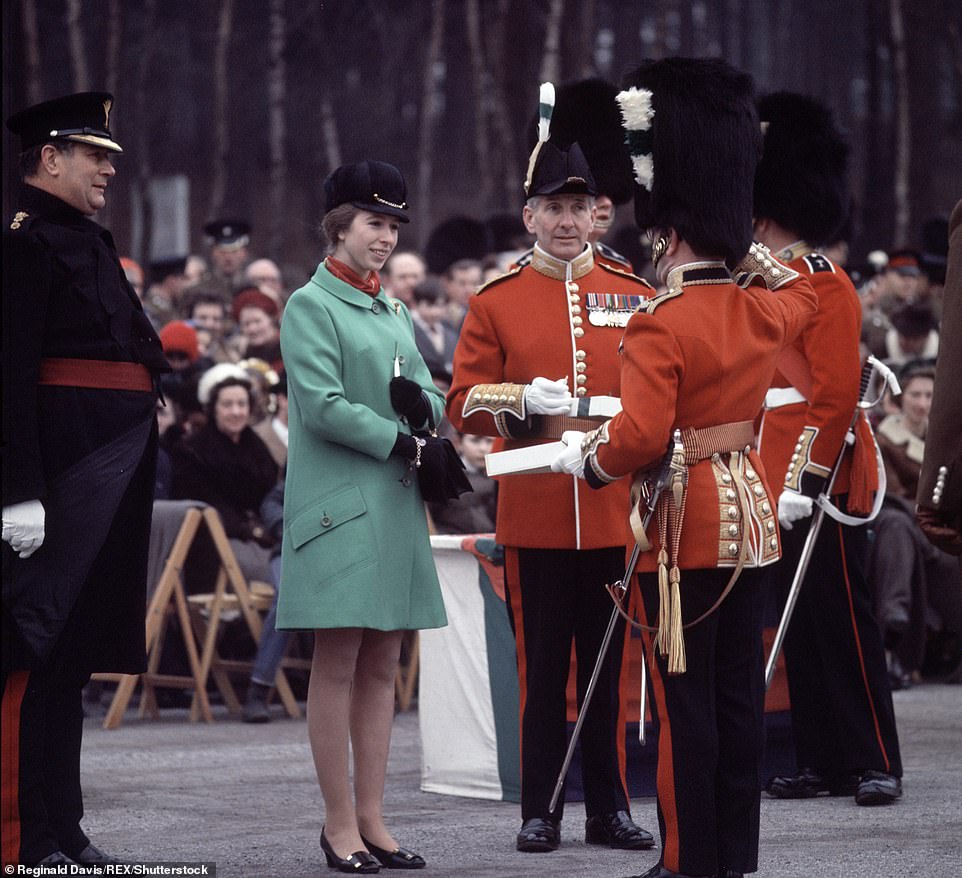 Princess Anne visits Pirbright Barracks, Surrey and presents leeks to the Welsh Guards on St David Day in 1969. This is to be the first of over 20,000 public engagements during her now 50 years in public service. She wears a short, spring-green coat and a red and gold peaked military-style hat with a gold chain at the front 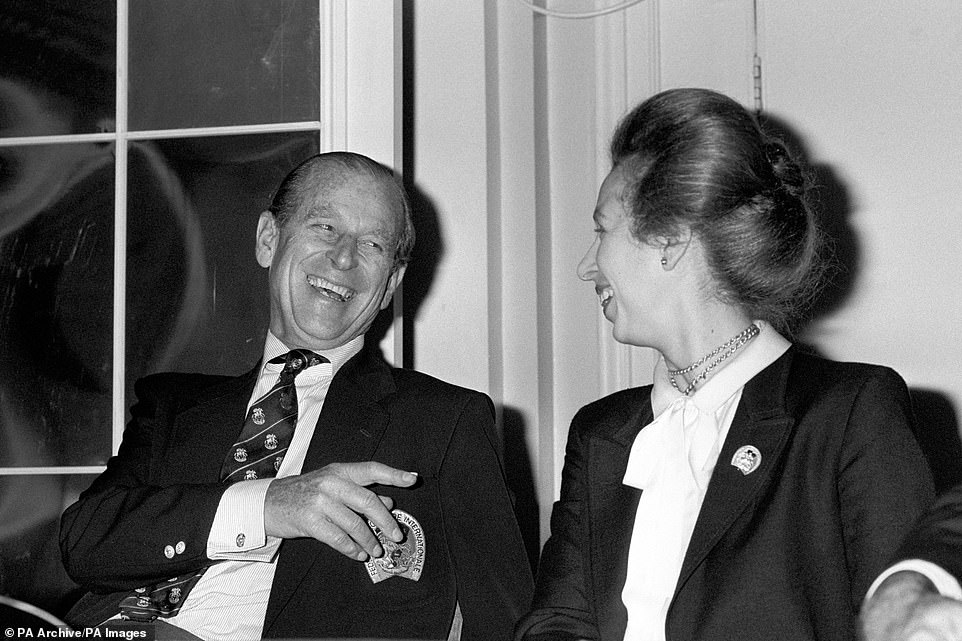 The Duke of Edinburgh shares a joke with his daughter Princess Anne at the general assembly of the International Equestrian Association at the Waldorf Hotel, London. The Princess Royal is known for her talents at horse riding and is the first member of the British Royal Family to have competed in the Olympic Games equestrian sports

Some, it must be said, are stultifyingly boring, though when I once mentioned this aspect of her work, her reply was a masterpiece of diplomatic understatement. ‘Some are perhaps less interesting than the others,’ she said.

Always near the top in the annual league table for engagements carried out by working royals, Anne has worked tirelessly for causes in Britain and abroad.

Anne maintains an old-world sense of formality — witness the very full curtsey she gave to King Abdullah of Jordan last week — while being the Royal Family’s most willing moderniser.

But if younger royals and new recruits to The Firm need a role model, then there is no one better. 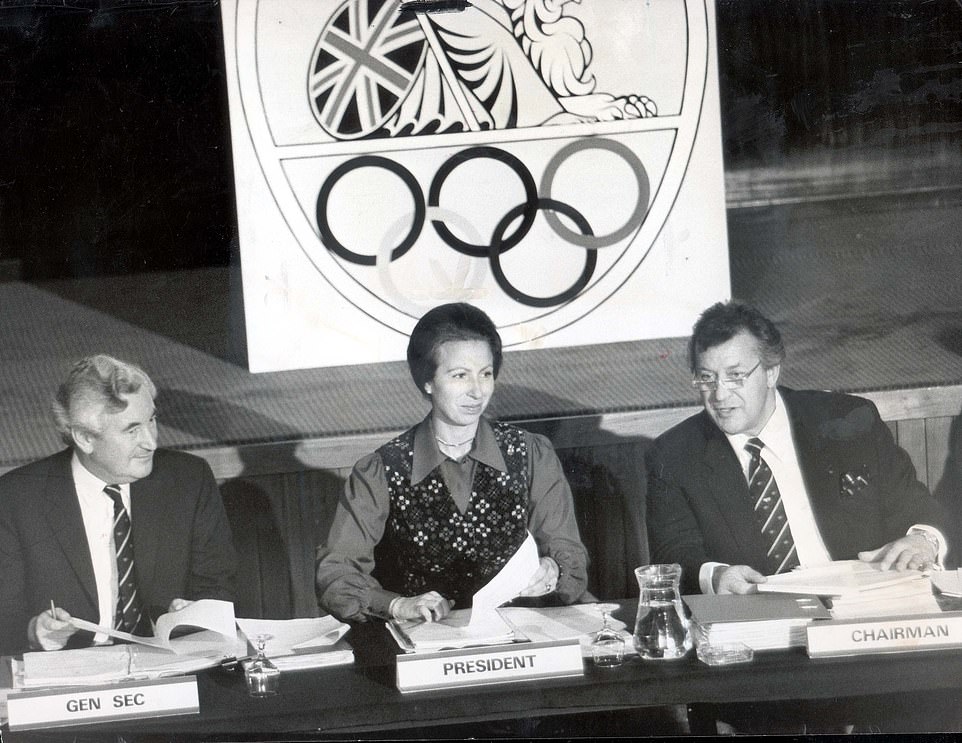 Princess Anne at a meeting of the British Olympic Association in 1984, who which she has served as president for over 40 years. Anne first participated in the 1976 Olympic Games in Montreal as a member of the British team, riding the Queen’s horse, Goodwill 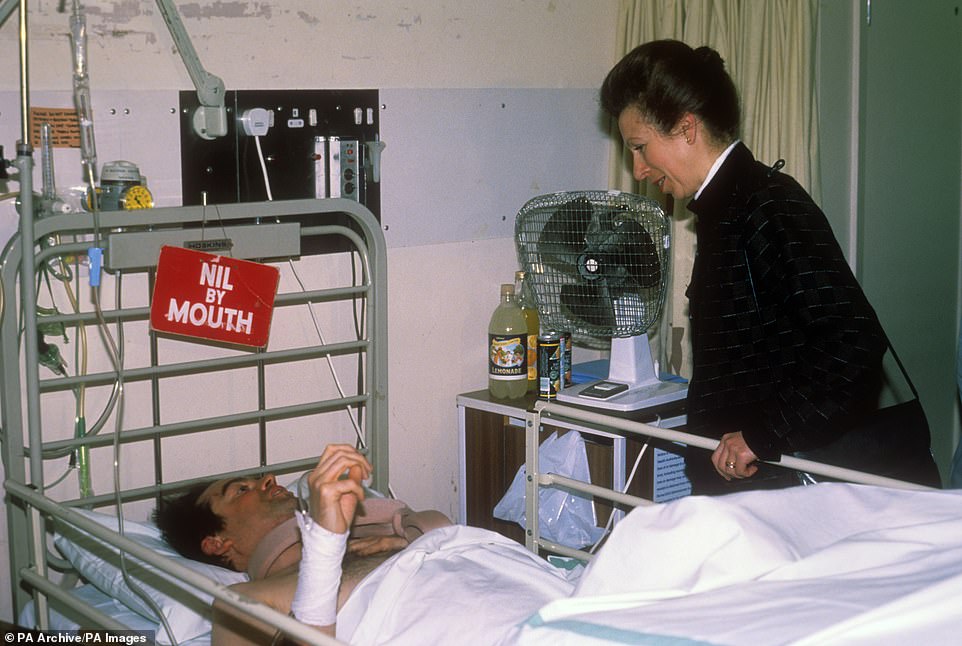 Duties can vary greatly for the Royals, and include some somber occasions. Here Princess Anne talks to John Young, 42, a civil servant from Belfast who survived the M1 Kegworth air crash in Leicestershire that killed 47 people and injured dozens more

The range of her interests is breathtaking: from Accessible Oceans (which aims to facilitate the disabled on water), the Acid Survivors Trust (to end acid and burns violence globally) and the Animal Health Trust, to Women in the Royal Navy (of which she is Admiral, Chief Commandant, her only uniformed appointment), Riding for the Disabled and the Butler Trust, an organisation that rewards high standards in prison work.

During one visit to Cardiff Prison she met a man who was just starting a life sentence. He told her how different she looked from photographs, saying: ‘You’re much better looking and younger. I could even fancy you.’

It didn’t faze the Princess, and she was in no hurry to escape, laughing and joking with inmates and officers alike.

Anne has travelled the world as a royal and on behalf of her organisations — recent trips include Bangladesh, Sierra Leone, Mozambique, Ethiopia and Bosnia — meeting everyone, from presidents and prime ministers to some of the most vulnerable people in the world. 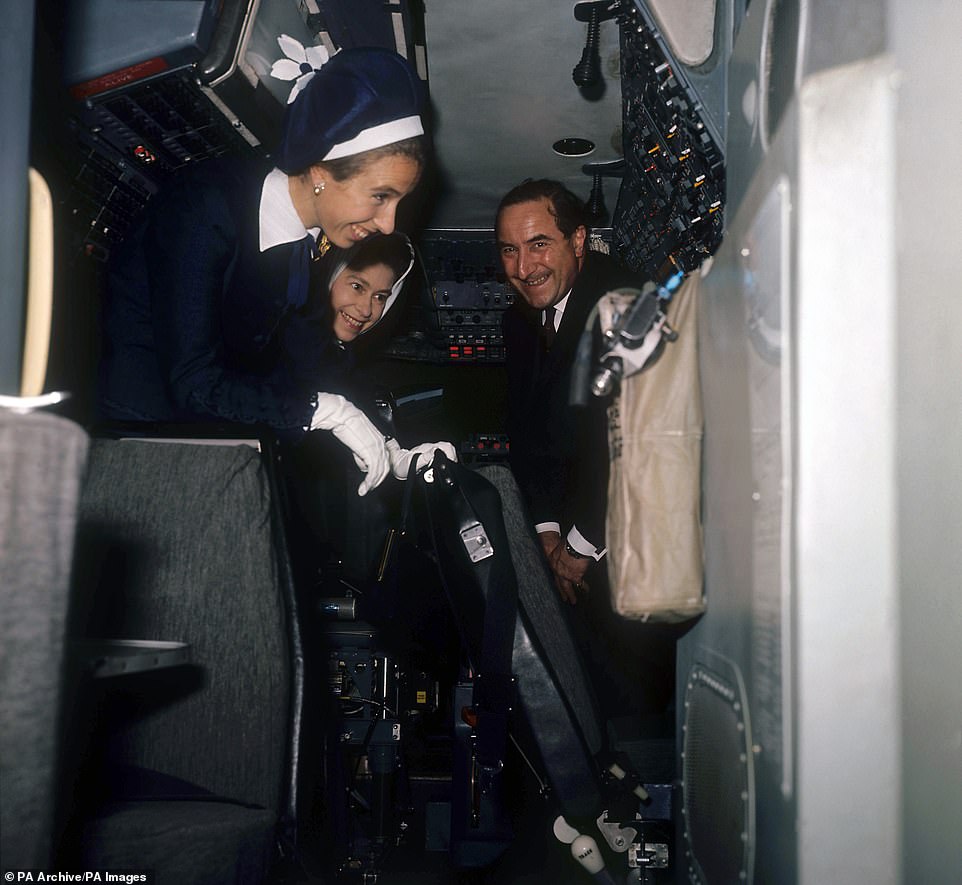 The Queen and Princess Anne in the cockpit of a Concorde having points explained by Brian Trubshaw, BAC’s chief test pilot, during a visit to Concorde 002 at London Heathrow Airport. The mother and daughter pair are known to attend engagements together from time to time 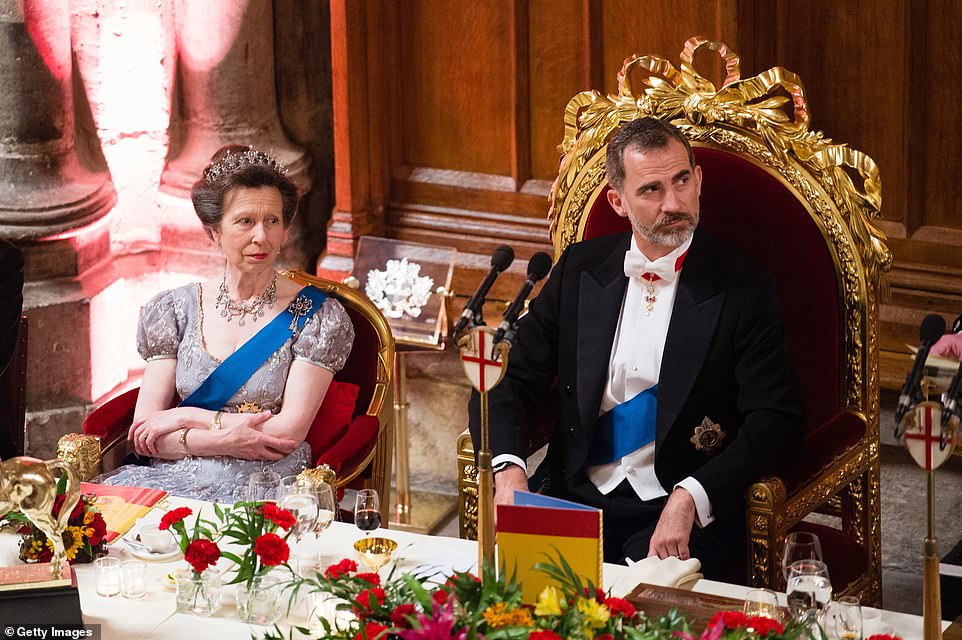 Duties can also include hosting international dignitaries. Princess Anne sits with King Felipe VI of Spain at a banquet in the Guildhall during a State visit by the King and Queen of Spain on July 13, 2017 in London, England. This was the first state visit for the Spanish Royal Family since 1986 with King Juan Carlos and Queen Sofia

In that context, she’s perhaps best known for her work with Save the Children, a charity she became president of in 1970, a role she held until 2016, when she accepted the position of patron in succession to her mother.

She concedes that being royal opens doors — and that is all she asks. Once inside she knows it is up to her and the charity officials.

Her credo is helping those in need, no matter who they are or where they come from. They may be refugees from civil war-torn countries such as the Yemen, Marxist-controlled countries, orphans in any of the one-party states of Africa or young mothers in India and Bangladesh.

It makes no difference to her; she never becomes involved in any of the political problems.

As she once famously remarked following an African tour: ‘I don’t come here looking for trouble. I come to see if I can help.’ And in response to a comment on her supposed lack of the maternal instinct, she said: ‘You don’t have to like children particularly to want to give them a decent chance in life.’ 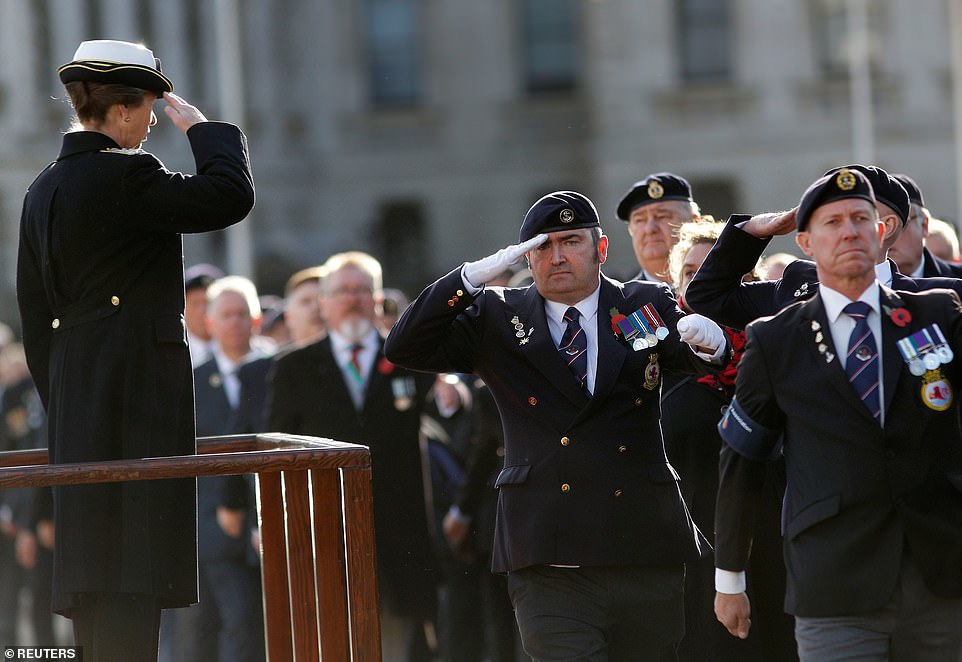 Military duties: Princess Anne salutes military veterans as they march past on Horse Guards Parade during the National Service of Remembrance at The Cenotaph in Westminster in 2018. The Princess holds several military honours

In 1990, President Kenneth Kaunda of Zambia was so impressed with her work that he nominated the Princess for the Nobel Peace Prize. She didn’t get it — it went to Mikhail Gorbachev, the Russian leader.

Her tours have placed her in some very un-royal situations. On one occasion in the Sudan, she was highly amused to be told that a fresh toilet pit had been dug in her honour — solely for her use.

And in another African country, where the women traditionally go bare-breasted, a member of the accompanying party wondered aloud where she was going to pin the medals she was expected to award. It’s a story Prince Philip loves to retell.

Nor does Anne stand on ceremony. Once, as a member of the British Olympic Association, she was in the U.S. helping to raise funds. At a black-tie dinner in Houston, she just about managed to keep a straight face when one of the guests asked her to ‘congratulate your mother on being re-elected’. (She has also been asked: ‘Is Winston Churchill your grandfather?’)

It was on that same visit that Anne displayed her laid-back sense of humour when she remarked to one of her bodyguards who was going bald: ‘It’s enough to make your hair curl. Well, perhaps not in your case.’

Nor is she averse to the odd ribald comment. As Patron of the Scottish Rugby Union for more than 30 years, she rarely misses a match at Murrayfield and saw the joke when one of the Scotland team suggested she join them in the showers to celebrate a win.

She takes it all in her stride.

There is yet still more to Anne’s achievements than duty, and it’s easy to forget the number of firsts she has accumulated.

She was the first member of the Royal Family to win a major international sporting title when she became European Three-Day Event champion in 1971; she was the first royal to be voted the BBC’s Sports Personality of the Year, and then to compete in an Olympic Games as a member of the British equestrian team in Montreal in 1976.

She was also the first royal to wear a mini skirt and holds the rather more dubious distinction of being the first daughter of a reigning sovereign to be divorced.

As the Queen’s only daughter, Anne has never been anything but royal, yet she famously declined an earldom for her first husband, Mark Phillips, as the Queen wished, or titles for either of her children, Peter and Zara. She thought they would be a burden.

How different from Princess Margaret, who when she married photographer Antony Armstrong-Jones in 1960, insisted he be raised to the rank of an earl.

Anne’s relationship with her mother has received little scrutiny — but it could not be closer. On the terrifying occasion when the Queen woke early one morning at Buckingham Palace in 1982 to find an intruder, Michael Fagan, sitting on her bed — in what should have been the safest room in the safest house in Britain — Anne was the first person she called afterwards. Woman to woman, mother to daughter.

The relationship with Anne was never more important than during the upheaval of Charles’s marriage to Diana, during which Anne would talk to her mother almost every day, listening as she poured out her troubles.

‘Anne was the mainstay,’ says a courtier from those times. ‘Whenever the Queen saw her or just talked to her, she went calm. Anne was the main one holding her mother together during the crisis.’

Who are the hardest working royals?

Her relationship with her father, Prince Philip, is better known and they enjoy an exclusive mutual admiration society. Tellingly, he has said she is the son he never had. Neither will hear a word said against the other, and as far as the Princess is concerned, her feelings for her father are far more powerful than for any other man — including, perhaps, her second husband, Tim Laurence.

Tim, or to give him his full name and rank Vice-Admiral Sir Timothy Laurence, was an officer on board the Royal Yacht, Britannia, when he first met Anne, who was still married to Mark Phillips at the time.

Anne remains on good terms with Mark and together they run a highly successful business staging shooting weekends at Gatcombe, festivals, horse shows and three-day events. He and Tim seem to get on well together.

Through long decades of hard work, Anne’s early image as an unco-operative and aggressive young woman, especially with the media, has been transformed. The public see her as a determined and thoroughly dependable Princess, a wife, devoted mother and now, at 68, grandmother of four, who has become one of the most respected members of the Royal Family.

In her seventh decade, she works as hard as ever. In her own words: ‘I see no point in sitting around doing nothing.’

Of course, she is still likely to come over instantly regal if her friendliness is mistaken for familiarity.

No one is left in any doubt for a moment that Princess Anne knows exactly who and what she is.

And while she accepts the need for good publicity if her charities are to benefit, she won’t be cajoled into performing for the cameras.

On one tour of Africa she was urged by photographers to hug an emaciated child. She refused, saying: ‘I don’t do stunts.’

Prince Philip once said that duty was ‘the price we pay for the positions we occupy’.

Tottenham star Son Heung-min spared military service after Asian Games win
No suspect identified in nearly half of race hate investigations in some areas
Duke and Duchess of Sussex set to be given a suite of rooms at Buckingham Palace as a London base
TANYA GOLD says Boris Johnson is the man who longs to be loved but cannot tolerate it
Wales confirms 30 more coronavirus cases taking the UK's total number of infected patients to 1,421
Piers Morgan lays into Sports Direct owner Mike Ashley and Wetherspoon boss Tim Martin
Europe´s borders reopen for `summer unlike any other´
Armed man 'holds six hostage' inside bank in Le Havre, France