The Queen was pictured travelling from Windsor Castle to The Royal Chapel of All Saints in Windsor, Great Park today.

Donning a pale blue coat and hat complete with glittering broach, the monarch brightened up an otherwise wet and miserable Sunday.

While usually accompanied by the Duke of Edinburgh, 97, it seems that the Queen’s husband had remained at home as she was chauffeur-driven to the Sunday service.

Even though the 92-year-old royal was being driven on public roads from the Castle, she was pictured without her seat belt on. 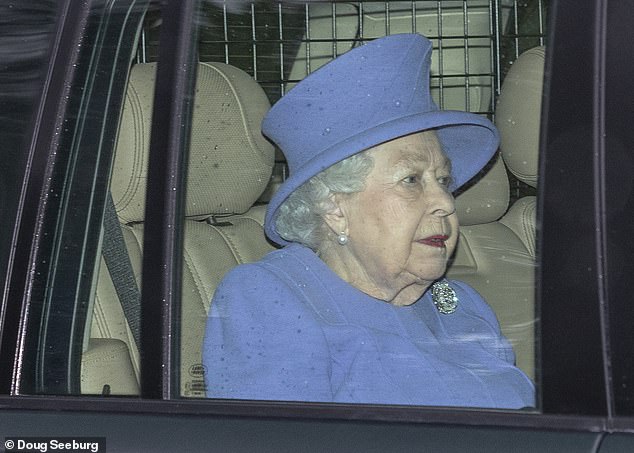 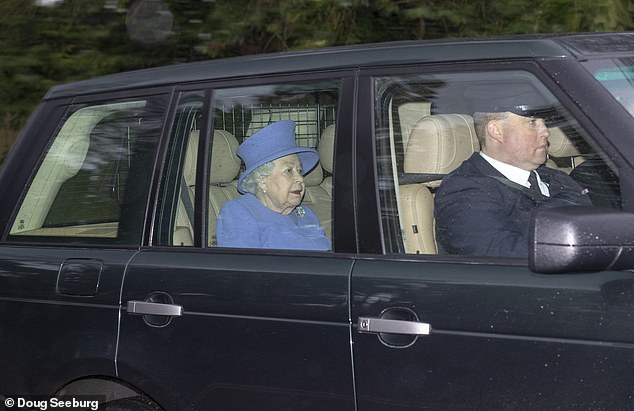 It comes just week after Prince Philip was left ‘conscious but very shocked and shaken’ after crashing his Land Rover near Sandringham.

Philip is believed to have pulled out of a side-road, coming from Sandringham House, on to the busy A149 where the Kia, travelling at up to 60mph, struck his side of the 4X4 in a so-called ‘t-bone’ smash.

It is not known where he was going but he enjoys visiting friends in the area and going to local shops.

His Land Rover was flipped on to the passenger side, and then slid across the carriageway before ‘somersaulting’ back on to the driver’s side and coming to a halt on a grass verge.

Philip was pulled out of the sunroof by driver Mr Warne, who had stopped at the scene, and the Duke was breathalysed by police, which came back negative, and rushed back to Sandringham where he is recovering with the Queen by his side.

The Duke of Edinburgh was clearly dazed after the crash but was uninjured, but two women inside the Kia were treated in hospital, one for a suspected broken arm, the other for an injured knee. The nine-month-old baby was unharmed.

TOWIE SPOILER: Sam Mucklow and Lauren Pope share steamy smooch
Man painted Asian woman's face white in 'racist incident' while posing as a make-up artist
Firm called in to help search for Spanish boy, two, who fell down well
Ex-fiancé of former world's fattest man says sex with him was 'great'
Ryanair passenger was branded a 'lesbo', 'd**e' and b***h' by rowdy men
Remembering Prince Charles's 1969 investiture
Essex Police beg fugitive brothers wanted over deaths of 39 truck migrants to hand themselves in
Players dive for cover during game after a swarm of bees invade the pitch