A man has revealed he feels better than ever after he started drinking more than a pint of his own urine every morning – and claims it tastes like bitter ale.

The interior designer starts every day with a pint of fresh urine, chased down with 300-400ml of aged pee, and claims the unusual thirst quencher has left him feeling healthier, happier and smarter. 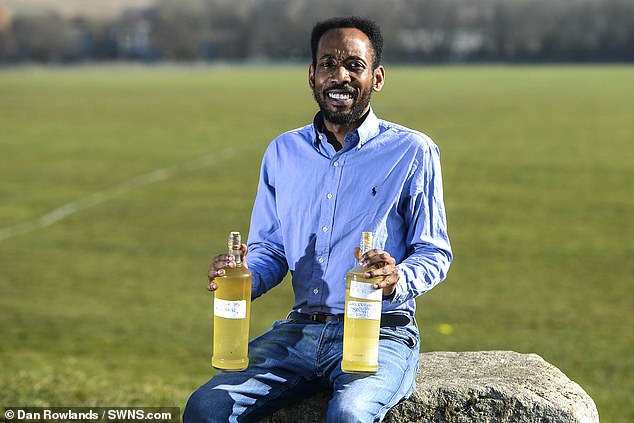 He explained: ‘I’d been researching alternative medicines when I read about drinking aged urine. I’ve always been open-minded about that sort of thing, so I decided to give it a go and drink it fresh.

‘It tasted a bit like a bitter ale initially, it was quite strong but not a terrible taste and I had no problem finishing the glass.

‘It was about half an hour later that I started to feel amazing, I was absolutely bursting with energy. Now I’d never go a day without it and would recommend it to anyone.’

Fabian first started researching alternative medicines and holistic therapies in 2013, when he kept experiencing pains in his stomach which doctors couldn’t get to the bottom of.

He said: ‘I was travelling a lot for work and eating junk food – Burger King, McDonald’s, anything convenient.

‘I was getting a lot of pain in my stomach and scans couldn’t find an ulcer or anything that could explain it, so I started looking online more and more. 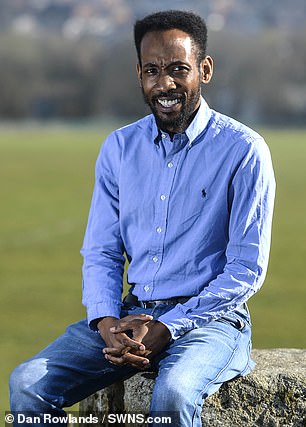 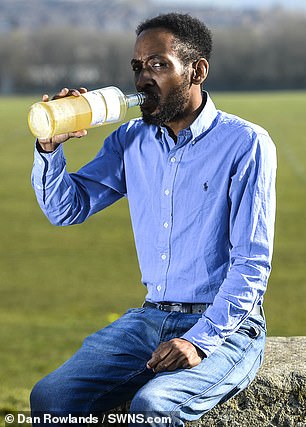 The interior designer starts every day with a pint of fresh urine, chased down with 300-400ml of aged pee, and claims the unusual thirst quencher has left him feeling healthier, happier and smarter

‘I’ve always been quite into holistic health but that was when I started to adopt it into my life more – starting with my diet.’

Fabian recalled: ‘I started to eliminate ‘normal’ foods and ate only fruit.. I’ll use mangoes, pineapple, strawberries – any fruit really, and add in chia seeds, flax seeds and hemp powder to make a smoothie.

‘I quickly started to feel amazing. I had more energy than I had in years, and could feel my well being improving.’

From there, his foray into a more alternative approach to health escalated and in 2015 Fabian decided to take the plunge and drink his urine.

Fabian said that his friends and family ‘weren’t that surprised’ – because he has always been a bit off the wall in his approach to health.

After enjoying the ‘benefits’ of fresh urine, he quickly began to leave some for up to a month – or until it reaches the desired PH level of nine.

The idea, Fabian says, is that by ageing it the urine goes through a ‘magnification process’ and any alleged benefits will be more potent.

Explaining the process of ageing his urine, Fabian said: ‘I store it in glass containers like mason jars, label it with the date and then leave it for around 30 days.

Urine therapy is said to date back to the Bible. Historical documents suggest that the Aztecs disinfected wounds with it, while the benefits are also mentioned in Indian and Chinese literature.

Urine is highly sterile, consisting of 95 per cent water and five per cent nutrients such as proteins, vitamins and minerals. During the digestive process, the liver deals with toxins and removes them to be excreted.

The blood then goes to the kidneys where it is filtered again and extraneous components the body no longer needs are collected in a sterile solution which is then passed as urine.

But GP Dr Rob Hicks told the Mail: ‘Over the years many people have claimed health benefits from drinking their own urine, but as far as I’m aware there is no scientific evidence to back-up these claims.

‘The kidneys are an efficient filtering system getting rid of what the body doesn’t need, so to put this back into the body seems counter-productive.

‘Personally, I believe there are better – and more palatable – ways to keep the body healthy including not smoking, eating a healthy diet, and keeping stress under control.’

Twitter users grimace as Theresa May robot-dances onto stage at Tory conference
Heartbroken family of murdered British backpacker Grace Millane, 22, pay tribute to her
Police at British airports will be armed with drone-catching bazookas
When you're ferried in limos and have jetset tans like Meghan, Holly and Michelle who needs tights?
Australia’s worst female serial killer Kathleen Folbigg smirks as she appears in court
Charlene Downes' mother waited two days to call the police when her daughter went missing
Joe Wicks enjoys family stroll with wife Rosie and their children Indie and Marley
Meghan Markle is ready to take the stand against her father, says her lawyer