Hardline Tory Brexiteers are to present Theresa May with ‘three tests’ her Brexit deal will have to pass in order for them to get behind it and pass it into law.

Jacob Rees-Mogg’s European Research Group presented peace terms to Geoffrey Cox, the Attorney General, in the latest sign that all but the most diehard eurosceptics are prepared to accept a deal.

In private talks the ERG called for a legally binding mechanism to escape the backstop, with a clear exit route and an unambiguous rewrite of the language in the Government’s legal advice, .

It comes after senior eurosceptics appeared to dramatically soften their insistence that the Withdrawal Agreement must be rewritten to remove the Northern Irish border backstop provision. 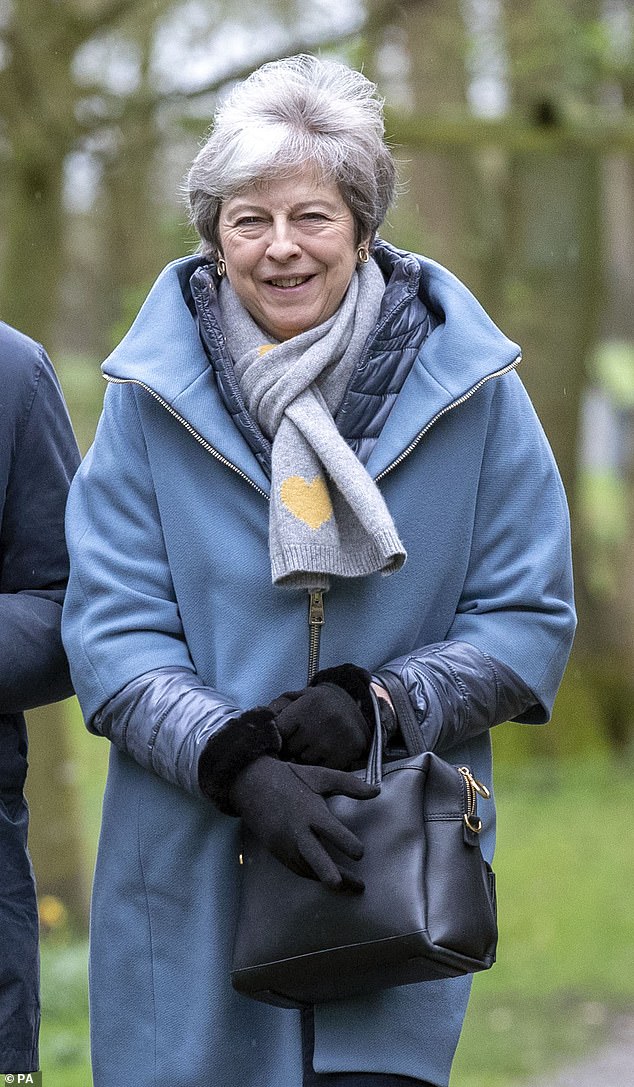 The Prime Minister, pictured leaving church today, warned MPs that they would need to back her deal if they wanted to avoid a delay to Article 50 or to avoid a no-deal situation

They included Mr Rees-Mogg and even the Democratic Unionist Party, who seem to have been startled by moves by MPs to delay Brexit to avoid leaving without a deal.

The move by the ERG came as the EU’s chief negotiator Michel Barnier warned that a Brexit delay is now ‘unavoidable’ even if MPs back a deal next week.

Barnier backed up the private positions of many of the Remainers in Theresa May’s Cabinet by saying she does not have time to make a deal.

Theresa May has threatened MPs in recent weeks to back her ‘meaningful vote’ on March 12 or risk further delaying Brexit or a no-deal scenario.

Barnier told Spain’s El Mundo that Brussels would not green light a Brexit deal on March 29 even if Parliament reached an agreement. 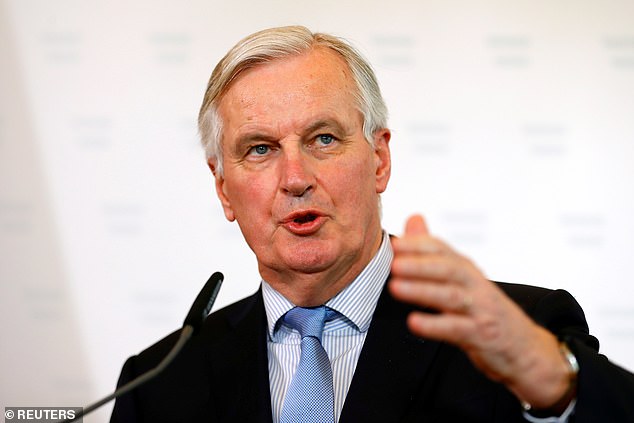 The EU’s chief negotiator has slapped down Mrs May’s notion of securing a withdrawal by March 29, suggesting she take a two month extension

Mr Barnier suggested a ‘technical extension’ of up to two months would be needed.

Referencing a technical extension, Mr Barnier added: ‘But you’ll have to ask the United Kingdom. If there is a vote on the 12th and it takes two months to carry out the procedure, it would be justified.’

Mrs May has said that if her deal is rejected by Parliament, MPs will be able to vote on whether the UK can leave the EU in a no-deal scenario, and if that is rejected, the Commons can decide on whether to extend Article 50 and delay Brexit for a limited period.

Prisons minister Rory Stewart warned today that a failure to back Mrs May’s Brexit deal would leave the UK in a ‘zombie world’.

He told Sky’s Ridge on Sunday: ‘All those other options are worse than the PM’s deal and I hope people are focusing on this

‘Because if you think that through, extension to Article 50, which is going to be a vote which would effectively give lets say a couple of month’s extension, would resolve nothing.

‘It would put us in a world in which we were still in a zombie world, not knowing where we were going.

‘And it would increase the chance of other options. It increased the chance either of people pushing for general elections which wouldn’t solve everything, for another referendum … or it would push people towards a customs union which would stop us trading with the rest of the world.’

Today the leader of the Commons Andrea Leadsom and Foreign Secretary Jeremy Hunt issued a joint warning to the Prime Minister over colleagues they believe are poised to delay or block Article 50 altogether.

The pair write in the Sunday Telegraph: ‘The active pursuit of a delay to Brexit – with no purpose beyond frustration – is a betrayal of the referendum result.’

They say this would be an ‘irretrievable breach of trust’ to those who voted Brexit but also warned against the ruptures that would be caused by a no-deal.

Tory MP George Eustice, who quit as a minister last week in protest at the PM’s Brexit stance, told Sky News: ‘If Parliament cannot accept this deal we have to have the confidence and the courage as a country to walk away first and talk after.

‘The other thing about no deal is that it doesn’t mean no deal forever more.

‘It’s a bit of a misnomer. No deal, probably, in effect means an informal transition period for nine months.’

The news comes as Mr Barnier said Brussels was ready to give further ‘guarantees, assurances and clarifications’ that the Irish backstop should only be temporary.

The backstop has been a sticking point for Brexiteers who see it as undermining the very sovereignty the UK stands to gain through leaving the EU.

Mr Barnier insisted that the controversial measure, intended to avoid a hard border on the island of Ireland, will not be removed from the Withdrawal Agreement.

While acknowledging Brexiteer concerns that the backstop is a trap that would keep the UK tied to the EU indefinitely, Mr Barnier insisted it is only ‘insurance’ intended for the ‘worst-case scenario’.

Speaking to German newspaper Die Welt, Mr Barnier said: ‘We know that there are misgivings in Britain that the backstop could keep Britain forever connected to the EU.

‘This is not the case. And we are ready to give further guarantees, assurances and clarifications that the backstop should only be temporary.’

The guarantees in question could come as an adjunct to the Withdrawal Agreement in the form of an ‘interpretive document’, he said. 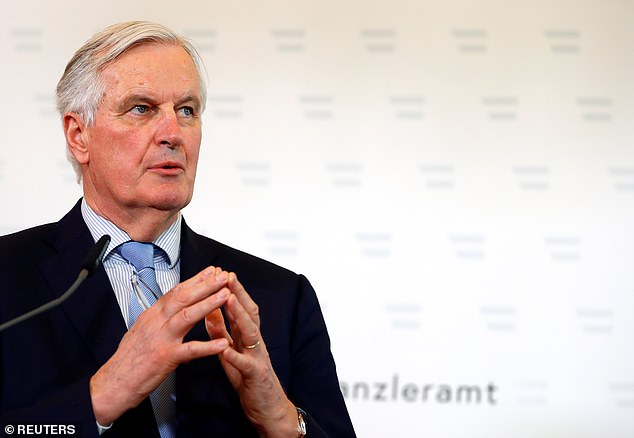 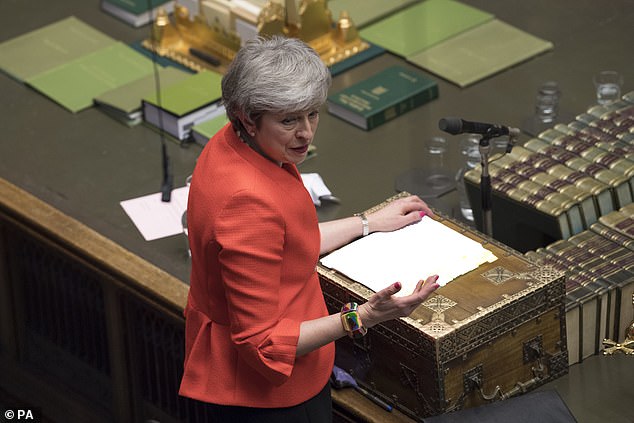 What is the ‘Cox Codicil’?

What is a ‘codicil’?

A legal term for an extra document attached to a treaty – a bit like an appendix.

What does this one try to do?

It won’t be clear unless and until it is published, but reports suggest Attorney General Geoffrey Cox is negotiating a codicil on how the backstop works.

The obvious intention will be to make clear the backstop can only be temporary.

Unclear. The EU already says the backstop is supposed to be temporary and that language already in the divorce treaty says so.

Cox’s legal advice on the original deal was despite this language, if there is no future UK-EU trade deal there was nothing to stop the backstop lasting forever.

The intention appears to be negotiating something that allows Cox to change his legal advice.

However the EU will not allow for a time limit to be placed on the backstop or give Britain the right to unilaterally pull out of it, Mr Barnier added.

The development came as the president of Slovenia suggested the country and many other EU states would be willing to accept a short delay to Brexit.

Borut Pahor, who sat on the European Council of leaders when he was prime minister, told Sky News: ‘I think Slovenia and a lot of other countries would say yes.

‘I think that nobody wants to see a hard Brexit in a chaotic way, which would damage London and Brussels and Ljubljana and every country.’

However Mr Pahor said the extension should not be used simply to postpone the making of a compromise decision.

Mrs May has insisted she does not want a delay Brexit and believes the UK can leave the EU as scheduled on March 29.

Meanwhile, Jeremy Corbyn confirmed Labour would now back a referendum if faced with a ‘damaging Tory Brexit’ or a no-deal departure from the European Union after Labour’s vision was rejected in the Commons. 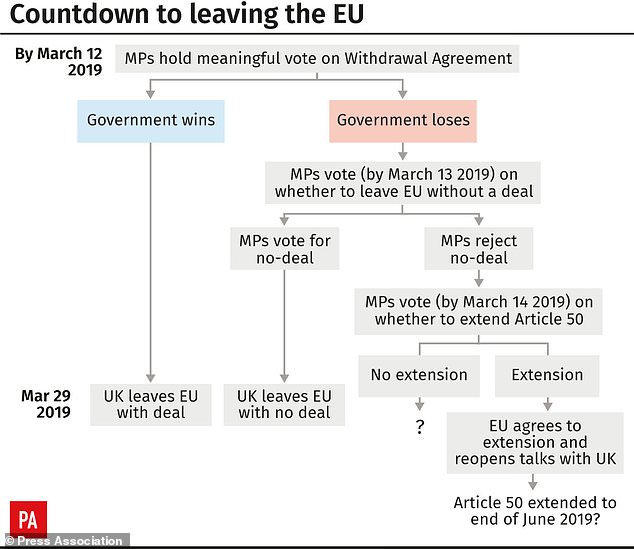 Chief Secretary to the Treasury Liz Truss warned on Friday that a new Brexit referendum would provoke a ‘massive crisis’.

She also indicated that a no-deal exit could be better than a delay.

Ms Truss told the BBC: ‘I think it would be an absolute disaster if we had a second referendum after people voted so clearly to leave the European Union.

‘There will be a massive crisis in this nation. And it would be terrible for business. It would leave us continuing in this limbo period.’

What is the Irish border backstop and why do Tory MPs hate it?

The so-called Irish border backstop is one of the most controversial parts of the PM’s Brexit deal. This is what it means:

The divorce deal says it will kick in automatically at the end of the Brexit transition if that deal is not in place.

This means many EU laws will keep being imposed on the UK and there can be no new trade deals. It also means regulatory checks on some goods crossing the Irish Sea.

Because Britain demanded to leave the EU customs union and single market, the EU said it needed guarantees people and goods circulating inside met EU rules.

This is covered by the Brexit transition, which effectively maintains current rules, and can in theory be done in the comprehensive EU-UK trade deal.

But the EU said there had to be a backstop to cover what happens in any gap between transition and final deal.

Getting out – even if there is a trade deal – can only happen if both sides agree people and goods can freely cross the border.

Brexiteers fear the EU will unreasonably demand the backstop continues so EU law continues to apply in Northern Ireland.

What concessions did Britain get in negotiating it?

During the negotiations, Britain persuaded Brussels the backstop should apply to the whole UK and not just Northern Ireland. Importantly, this prevents a customs border down the Irish Sea – even if some goods still need to be checked.

The Government said this means Britain gets many of the benefits of EU membership after transition without all of the commitments – meaning Brussels will be eager to end the backstop.

It also got promises the EU will act in ‘good faith’ during the future trade talks and use its ‘best endeavours’ to finalise a deal – promises it says can be enforced in court.

What did the legal advice say about it?

Attorney General Geoffrey Cox said even with the EU promises, if a trade deal cannot be reached the backstop could last forever.

This would leave Britain stuck in a Brexit limbo, living under EU rules it had no say in writing and no way to unilaterally end it.

Speedboat killer in court in Georgia ahead of extradition to UK
Bonnie Langford is being lined up as a judge on Strictly Come Dancing
Video emerges of Bangladeshi teen being forced to recount rape ordeal before she was burned to death
Gove jibes at Boris Johnson's 'insane' tax cut plan and 'submarine' campaign
Love Island's Sherif Lanre CONFIRMS he was booted from villa for 'kicking Molly-Mae Hague in groin'
JAMES HASKELL: Eddie Jones told us he would change our live at first England team meeting
Evocative pictures show Victorian youths rescued from the streets before being sent to Canada
Santa pours! It's a Christmas washout with two weeks' worth of rain set to fall in 24 hours