Freshman Rep. Alexandria Ocasio-Cortez warned her colleagues they’d wind up ‘on a list’ if they vote with .

Some of her colleagues interpreted the comment as a threat that she’d support efforts to oust them from Congress, news outlets reported on Friday.

The New York congresswoman who unseated a Democrat herself to win a seat in Congress told athat her remarks during a private caucus were not meant to be an electoral threat, however.

Ocasio-Cortez says she was referring to the ‘crush’ of calls members would receive from progressives and the protesters they could expect in their office. 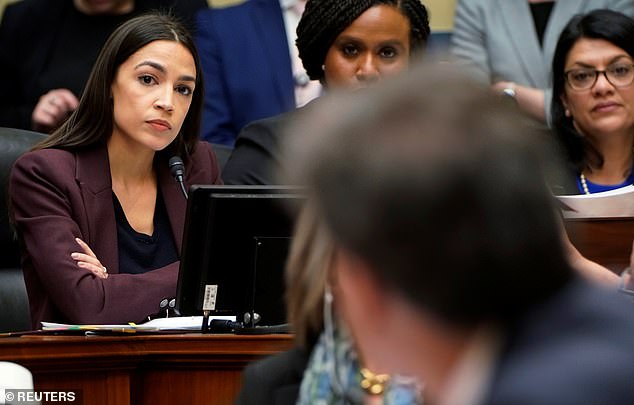 Freshman Rep. Alexandria Ocasio-Cortez warned her colleagues they’d wind up ‘on a list’ if they vote with Republicans 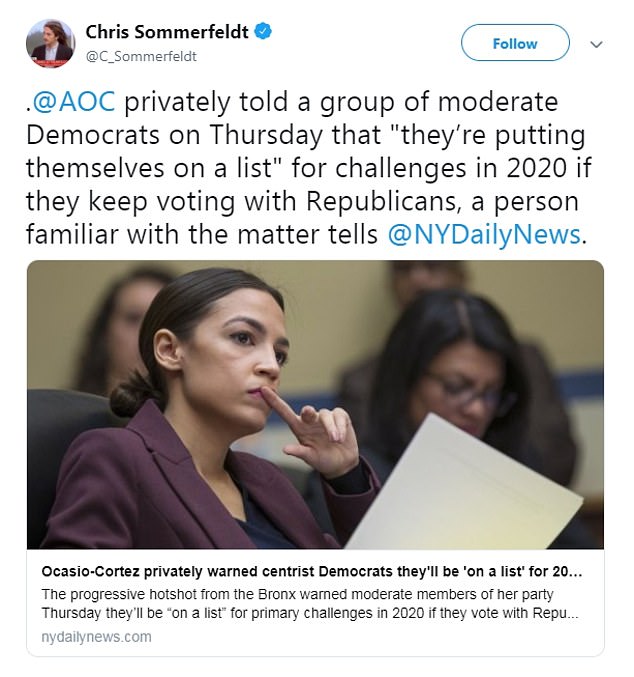 Ocasio-Cortez’s spokesman also refuted the claim that the lawmaker was threatening primary challenges, telling the : ‘They’re putting themselves on a list for Republicans and progressive activists to target.’

Sources framed AOC’s comments to the  the same way that they appeared in the NY Daily News, however — as a warning that she’ll go after their jobs if they don’t buy into her brand of politics.

The argument came amid a vote on a background checks bill that passed the House with a GOP-backed amendment, according to the Post.

Republicans added a provision, with the support of 26 Democrats, that requires an Immigration and Customs Enforcement notification when an illegal immigration attempts to purchase a gun.

She reportedly said that her operation would protect ‘those who have the courage to take the vote’  as she fumed behind closed doors.

Pelosi told reporters that her advice to Democrats is also to vote ‘no’ on requests to consider amendments that Republicans propose.

‘Because the fact is, a vote yes is to give leverage to the other side,’ she stated.

Ocasio-Cortez spokesman Corbin Trent admitted to The Post that his boss said she would name names when activists ask who the holdout votes were on bills enacting progressive polices.

‘She said that when activists ask her why she had to vote for a gun safety bill that also further empowers an agency that forcibly injects kids with psychotropic drugs, they’re going to want a list of names and she’s going to give it to them,’ Trent said.

The congresswoman said in a series of tweets, in which she personally disputed the nature of her comments, that she was not referring to challenges to her colleagues’ congressional seats, though.

‘I didn’t say that they were putting themselves on a list for primaries. I said that by Dems distinguishing themselves by breaking off on procedural MTR votes, they were inadvertently making a list of targets for the GOP and for progressive advocates on their pro-ICE vote,’ she said.

The initial tweet didn’t clarify what she meant if not electoral pressure from the left. 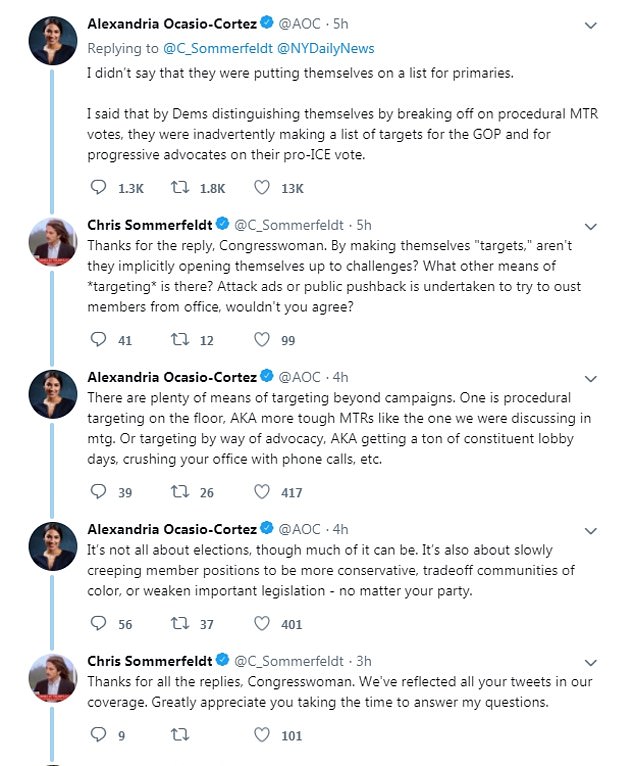 She said later, in response to a request to explain further from reporter, ‘There are plenty of means of targeting beyond campaigns. One is procedural targeting on the floor, AKA more tough MTRs like the one we were discussing in mtg. Or targeting by way of advocacy, AKA getting a ton of constituent lobby days, crushing your office with phone calls, etc.’

This time they were on the same side of the argument, The Post reported.

According to the newspaper, one moderate member of the Democratic caucus who represents a swing district, Rep. Xochitl Torres Small of New Mexico, emotionally explained why she couldn’t support left-wing legislation all of the time.

Congressional sources who spoke to the Daily News said AOC’s comments were perceived as an electoral threat to fellow lawmakers tacking to the center.

The 29-year-old lawmaker obtained her own seat by overthrowing a sitting congressman, who was a part of congressional leadership, via a primary in a district that overwhelmingly votes for Democrats.

She has become a target in her own way since taking office, coming under extreme criticism from conservatives for her far-left views.

On Twitter, Ocasio-Cortez acknowledged that ideological differences, even within the same political party, often manifest themselves as primary challenges.

‘It’s not all about elections, though much of it can be,’ she said. ‘It’s also about slowly creeping member positions to be more conservative, tradeoff communities of color, or weaken important legislation – no matter your party.’