Republican Rep. Mark Meadows – who brought a black associate of President ‘s to Michael Cohen’s public hearing – is denying he’s a racist after a video resurfaced of him talking about sending then-President ‘back to Kenya.’

‘I can tell you that anyone who knows me knows that there is not a racial bone in my body,’ Meadows told  which asked him about the video.

The 2012 video shows Meadows, who was a congressional candidate at the time, saying Obama should be sent ‘back home to Kenya or wherever.’

And it surfaced after Meadows’ brought an African American administration staffer to Cohen’s hearing as proof the president is not racist – a move in itself that one Democrat labeled ‘racist.’ 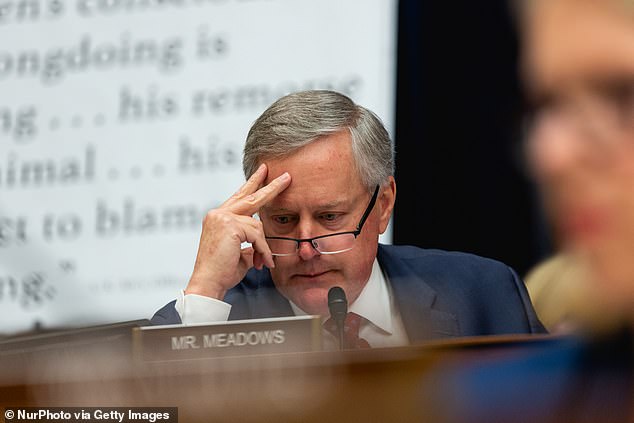 Republican Rep. Mark Meadows is denying he’s a racist after a video resurfaced of him talking about sending then-President Barack Obama ‘back to Kenya’ 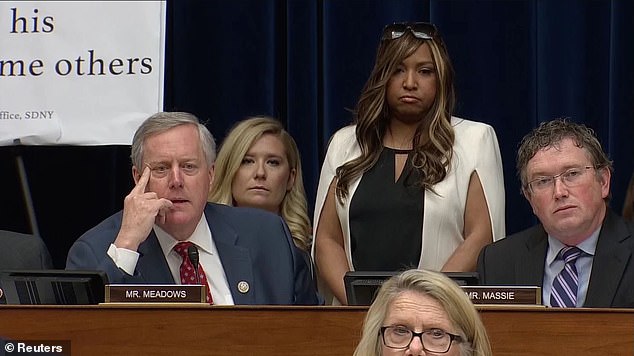 Rep. Mark Meadows brought Lynne Patton, an African-American administrator in the Department of Housing and Urban Development who used to work for the Trump Organization (the woman standing behind him) to Michael Cohen’s hearing

‘I’ve addressed that dozens of times and candidly apologized for that a number of times. It was when I was running for office and answered a question – I actually had just gotten back from Kenya. We had been doing mission work in Kenya, so anybody who knows me knows that I really show respect regardless of race or gender,’ Meadows told reporters on Capitol Hill Thursday.

The then-Congressional candidate was speaking at a Tea Party Express Rally at Patton Park in Hendersonville, N.C. on June 9, 2012 – standing on a stage before a bus bearing the label ‘Tea Party Express’ – when he made his comments.

‘2012 is the time we’re going to send Mr. Obama home to Kenya or where ever it is. We’re going to do it,’ Meadows said to great applause.

He won his first term in Congress that year and is now one of President Donald Trump’s staunchest allies on Capitol Hill.

President Trump gained national prominence when he pushed the untruthful theory Obama was not born in the United States.

Meadows led Trump’s defense on Wednesday when the president’s former personal attorney accused the president of being a racist.

Meadows, the chairman of the conservative Freedom Caucus, brought Lynne Patton, an African-American administrator in the Department of Housing and Urban Development who used to work for the Trump Organization, to the hearing to use as proof in his defense of Trump.

During the hearing, Cohencharged the president with being a ‘racist’ and claimed Trump told him ‘that black people would never vote for him because they were too stupid.’

Meadows asked Cohen what proof he has that Trump is a racist.

He pointed to Patton, who was sitting behind him in the hearing, as evidence that President Trump is not and asked her to stand. He then spoke on her behalf.

‘I asked Lynne to come today in her personal capacity to actually shed some light,’ Meadows said. ‘She says that as a daughter of a man born in Birmingham, Ala., that there is no way that she would work for an individual who was racist.’

Cohen admitted he does not have tapes of the president making any such remarks but pointed to the lack of African American top staff at Trump’s private company.

‘Ask Ms. Patton how many people who are black are executives at the Trump Organization. The answer is zero,’ Cohen said. 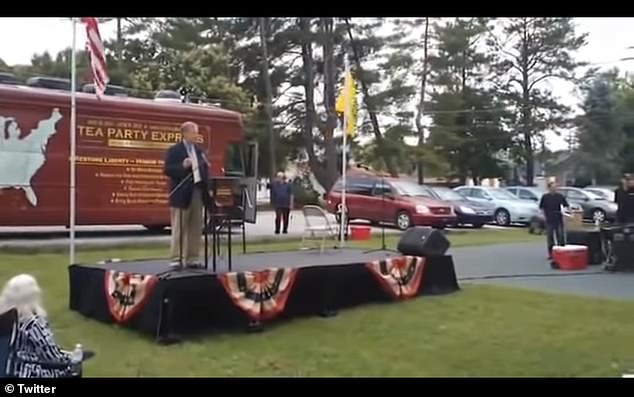 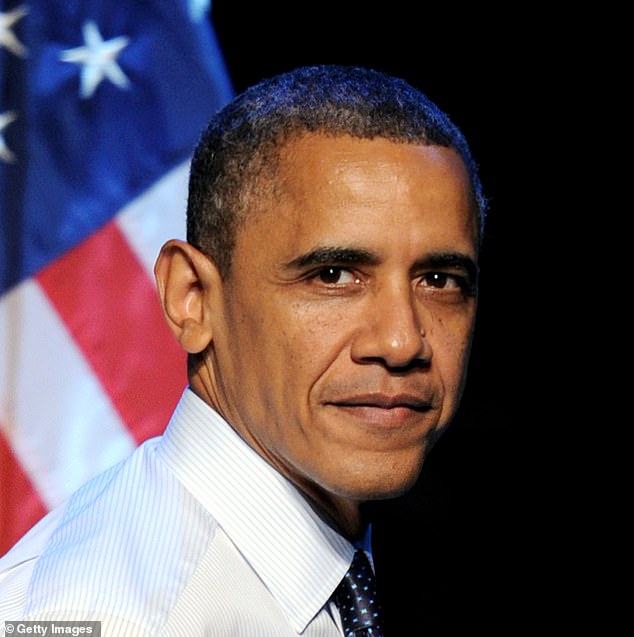 Patton is the former vice president of the Eric Trump Foundation and, as an event planner, did much work for the Trump family.

‘Just because someone has a person of color, a black person, working for them does not mean they aren’t racist,’ she said.

‘And it is insensitive … the fact that someone would actually use a prop, a black woman, in this chamber, in this committee, is alone racist in itself,’ she added.

Meadows fired back and asked for her comments to be stricken from the record.

‘There’s nothing more personal to me than my relationship – my nieces and nephews are people of color. Not many people know that,’ Meadows said.

‘And to indicate that I asked someone who is a personal friend of the Trump family, who has worked for him, who knows this particular individual – that she’s coming in to be a prop. It’s racist to suggest that I asked her to come in here for that reason,’ he said.

‘As everybody knows in this chamber, I’m pretty direct, so I, if I wanted to say that, I would have,’ said the freshman Democrat, who is one of the first Muslim women in Congress. ‘But that’s not what I said.’ 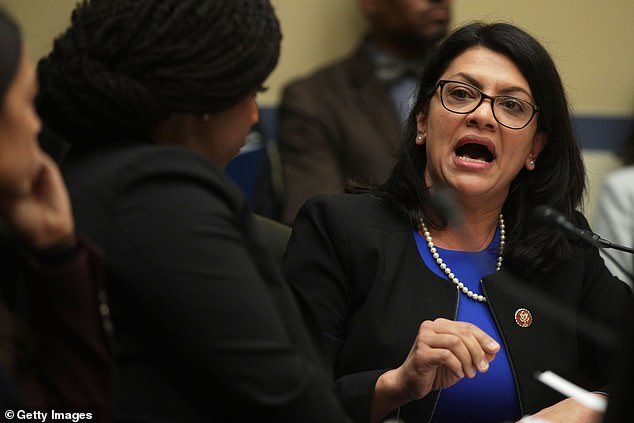 Democratic Rep. Rashida Tlaib said Meadows’ bringing of a black woman to defend Trump was racist; she later apologized to him

She told CNN Thursday morning she meant no disrespect toward Patton but stood by her earlier comments.

And when she was asked if she thinks Meadows is a racist, Tlaib said: ‘Look, I feel like the act was, and that’s up to the American people to decide whether or not he is.’

Tlaib and Meadows were spotted hugging it out on the House floor Thursday. The two lawmakers spoke for several minutes.

Patton denied the suggestion that she was used as a ‘prop.’

‘The president does not see color, race, creed, religion. What he sees is success and failure,’ she added.

Patton spoke on the president’s behalf at the July 2016 Republican National Convention.

During her speech, she said ‘Donald Trump knows that black lives matter.’

She added: ‘There’s not one person in this room who can’t deny that historically black lives have mattered less. My life mattered less and there are people out there who still believe this to be true. But tonight, as a minority myself, I personally pledge to you that Donald Trump knows that your life matters.’

Patton was also one of the president’s defenders when Omarosa Manigault Newman charged, in her memoir, that Trump was a racist.

‘Like countless other minorities and women, the President has given me the opportunity of a lifetime to rise up through the ranks of The Trump Organization and now proudly serve this country,’ Patton said in a statement at the time.

Cruise ship stranded for hours after suddenly losing its propulsion and auxiliary engine power
Duchess Sophie Württemberg marries French Count Maximilien d'Andigné
Filipino Victoria's Secret model hits back at critics who question her heritage
Cheeky major offers parenting advice to Kate as she visits the soldiers of the Irish Guards
Woman reveals she wrote rich children's essays to get them into top schools
Supporters call for Chelsea Manning to be released from solitary confinement
Texas Tech medical school agrees to stop using race in admissions process
Elephant uses its trunk to snatch girl, seven, from her bed before trampling her to death in India