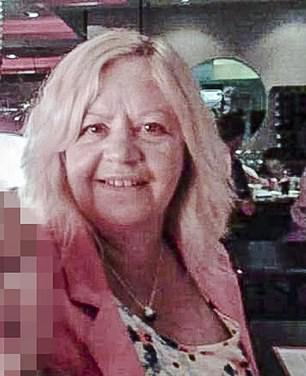 An Irish family syndicate who scooped a £153million Euromillions jackpot celebrated their incredible win by enjoying a £10 carvery dinner. Pictured: Kathleen Sheridan, who is a member of the winning group

An Irish family syndicate who scooped a £153million Euromillions jackpot celebrated their incredible win by enjoying a £10 carvery dinner.

The group, who clearly didn’t let their winnings go to their head, even went to the lottery HQ to confirm their win by bus.

Gerry Brown, whose wife is a member of the winning group, said they have had a ‘hectic’ time meeting financial advisers as they decide what to do with the largest jackpot in Ireland’s history.

The family, from Co Dublin, were presented with their winning cheque on Thursday.

The winning ticket was sold at Reilly’s Daybreak newsagents in The Naul, in the north of the county.

Mr Brown, who said he was keen to buy a bike, recalled the shock his wife felt when she checked her numbers and realised she had won.

He told RTE’s Today with Sean O’Rourke radio show on Friday: ‘She could hardly talk, I was nearly going to get an ambulance for her.’

His wife placed the ticket in an Argos catalogue for safekeeping overnight before travelling on the bus the next day to Ireland’s National Lottery headquarters.

There was huge media focus on their local village before the family’s identity was revealed and Mr Brown said waiting journalists were oblivious as they passed, and even waved to them from the bus having deposited the ticket.

He praised residents in The Naul for having kept quiet about who the family were and where they lived, describing it as a ‘lovely place to live’.

He added that the family, all of whom he said were retired, were keen to get back to normality after the massive win.

He said: ‘I would be hoping to get back to it (normal life). I’d rather just go back the way I was. Happy enough before I won it so I don’t want it to change too much.’

The family celebrated with a low-key carvery dinner in the hotel where they were meeting the bank, which he said cost less than 12 euro (£10) each. 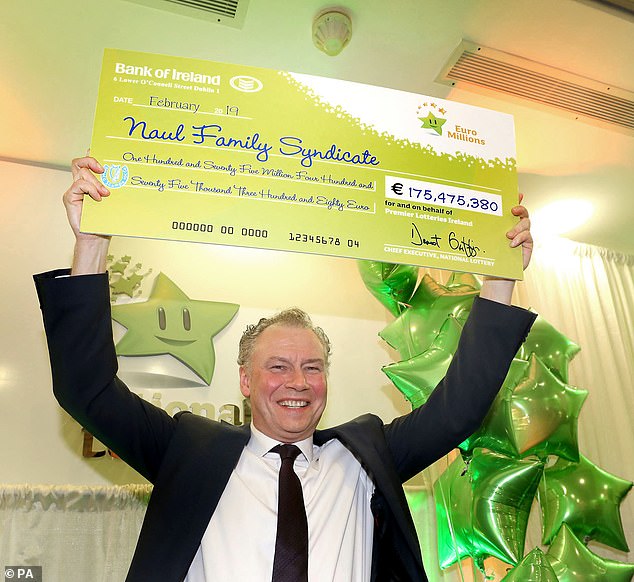 The huge win – the biggest in Ireland’s history – will be divided among the nine members from Co Dublin. Pictured: National Lottery chief executive Dermot Griffin holding the jackpot cheque

He said: ‘For me, I’ll probably buy one of the best bikes you can buy. I’m mad into cycling so that’s the only thing I’d be thinking of.’

In terms of what else they may do with the money, Mr Brown said it is still early days for the family.

‘I suppose a lot of them will get new cars or whatever,’ he said.

‘We haven’t really thought of it because we’ll have to give it a while to sink in. It’s hard to even think you won, you’d hardly believe it.’

He said they have charities they want to help and will focus on looking after their families.

‘I would rather just stay the way I am, I suppose if I won it 30 years ago, it might be different,’ he said.

‘At our age it’s not as big a deal, probably. The best thing about the whole lot is what you can do for other people actually, that’s the nicest thing abut it.

Asked what they might do with it he said: ‘Look after your kids and grandkids, and brothers and sisters and all that.’

After claiming the win Mr Brown, in a statement released through the Irish National Lottery, said: ‘This is life-changing for all of the family and we are absolutely thrilled.

‘We have spent the last week getting independent legal and financial advice, and our win is slowly sinking in.

‘We are a very close family and this is a dream come true for us. We want this win to change our lives in a positive way.’

National Lottery chief executive Dermot Griffin said: ‘I am absolutely thrilled for the family and it was a pleasure meeting them in National Lottery HQ and to share their excitement and joy.

‘Happy days like this is part of what playing National Lottery games is all about. This has been a historic few weeks for us with our biggest ever jackpot payout.’

The Bachelor's Nikki Gogan braves the weather throughout open home in Perth
Chicago-area diocese agrees $1.4M settlement in priest...
Tom Hardy admits he was a 'bog-standard alcoholic' his whole life
Armed police officers shoot man and arrest another during pre-planned operation in Wimbledon
Tui is the most eco-friendly airline, Virgin and BA are among the worst for pollution
Labour activists 'could QUIT the party over Corbyn's Brexit referendum stance'
Schoolgirl dies and 17 others are injured in knife attack in Tokyo
Heart transplant list could be slashed after hope of keeping donated organ alive for 24 hours