An unhappy bride-to-be has been branded an ‘a*****’ for complaining that her partner had proposed to her with a family heirloom instead of a Tiffany ring.

Taking to , the 29-year-old bridezilla, who is believed to be American, revealed that her future husband had chosen the second-hand ring because of its sentimental value.

He told his fiancée that his late father was the only man his mother ever truly loved, and that the ring showed that she was the only woman he would love.

Unsatisfied with the ‘average’ stones in the vintage ring, she told the father of her child, who she’s been with for 10 years, that she didn’t want to wear it. 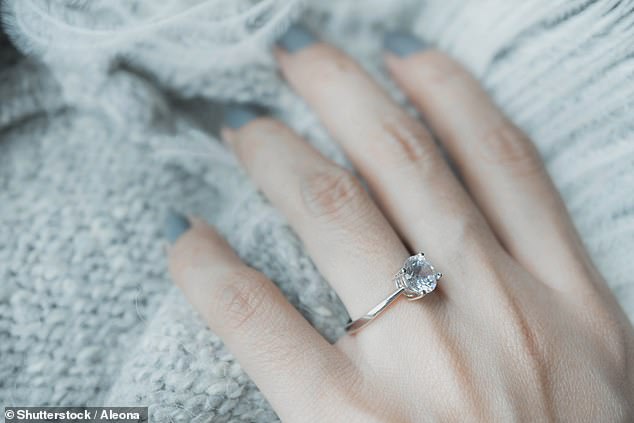 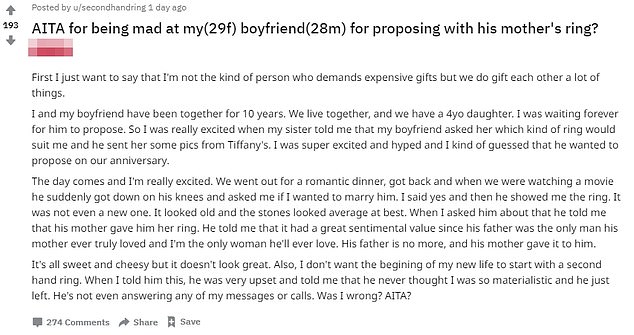 The anonymous bride-to-be took to Reddit to vent about the situation, saying it looks ‘old’ and the stones are ‘average at best’

The unidentified woman explained that she was expecting a Tiffany ring, after her sister got her hopes up.

Her partner had apparently sent her sister some pictures of rings from the upmarket brand – but its was just an effort to find out what style might suit her.

But that didn’t stop users from slamming the bride-to-be, who posted her dilemma in the Subreddit where people ask ‘Am I The A*****?’

After she posted her dilemma, saying that the proposal took place after a romantic dinner and a movie hundreds of people commented on why the thought her story was wrong.

One individual said: ‘He explained to you that it was reminiscent of his parents’ marriage, one that he apparently felt was a marriage he wanted to emulate with you.

‘He was trying to show you how much he loved you, and you boiled his love down to the value of a piece of metal and a rock.’

Reddit users slammed the bridezilla, saying she had ‘boiled his love down to the value of a piece of metal and a rock’

Another responded to the women, who also admitted in the post that they had a 4-year-old together: ‘You can get a display ring or work out buying something you want to show off, but the proposal is entirely sentimental.

Taking a more balanced approach, another user commented: ‘I think it would be totally reasonable to ask for a new setting that was more your style, but it’s kind of bizarre to me that you want a new diamond.

‘That thing was in the ground for thousands of years, who cares? And it’s pretty much impossible to check if diamonds are blood diamonds, so just in a moral human way it’s much better to have an “old” one.

‘I also would rather wear a diamond with family meaning and history, it’s hard for me to understand a different point of view… I guess unless the diamonds are noticeably extremely clouded, but I really doubt that’s the case.

Others branded her a ‘horrible’ woman, and said she was acting 100% shallow and materialistic

‘I’m sure they’d look great if you got them buffed. Overall, I think this was 100% shallow and materialistic. You bought waaaay too much into the idea that a guy has to ‘buy your love’ with an expensive rock.’

Others said that she sounded ‘horrible’ and that they never fell in love with such a ‘materialistic’ woman.

One wrote: ‘I can’t even believe you need to ask this question… If I were your fiancé I’d be reconsidering the marriage lol.’

While another said: ‘You sound horrible. “It wasn’t even new”. My biggest fear is falling in love with a woman like you.’

But despite the comments it doesn’t seem the story had a happy ending anyway, as  at the end of the post the woman admitted that he boyfriend isn’t answering any of her calls or messages.

Viral video reveals Oakland lady threaten household of Spanish audio system for parking outdoors her...
Leading medical journal is accused of having a 'pro-BUTTER bias'
Hundreds FDNY firefighters pay respect in wake officer who fell death saving man from burning car
The ingenious ways to use cucumbers around the house and as a beauty product
White woman calls police on Hispanic man trying to visit his aunt
'Extensive search' is under way for Fort Hood soldier, 20, who has been missing for five days
Donald trump threatens federal intervention in Chicago over gun violence
As Putin's rival fights for life after novichok attack, new book asks why West won't confront Russia