Michael Cohen revealed the letter he sent to one of Donald Trump’s former colleges as part of his scheme to ‘threaten’ the to keep the then-candidate’s grades secret as part of bombshell Congressional testimony Wednesday.

In the letter he sent to the president of Fordham University in the Bronx, New York, Cohen tells him to seal Trump’s records and that if they were to be released, he would sue and press for charges.

He added: ‘P.S. Mr. Trump truly enjoyed his two years at Fordham and has great respect for the University.’

Cohen made a point of including the documents to accompany testimony, where he said Trump was a ‘conman’ and a ‘racist’ – and noted that Trump had demanded that President Obama release his own grades after stoking a conspiracy theory that Obama wasn’t born in the U.S.

Trump attended Fordham for two years before transferring to the Wharton School at the University of Pennsylvania. None of his grades for any of his education have ever been published.

Cohen told the House Oversight Committee he was furnishing ‘copies of letters I wrote at Mr. Trump’s direction that threatened his high school, colleges, and the College Board not to release his grades or SAT scores.’ 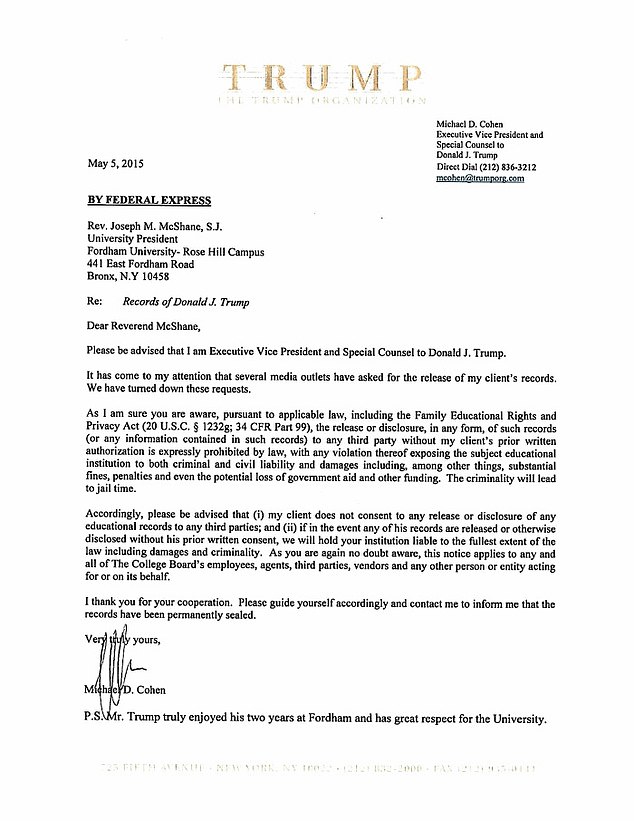 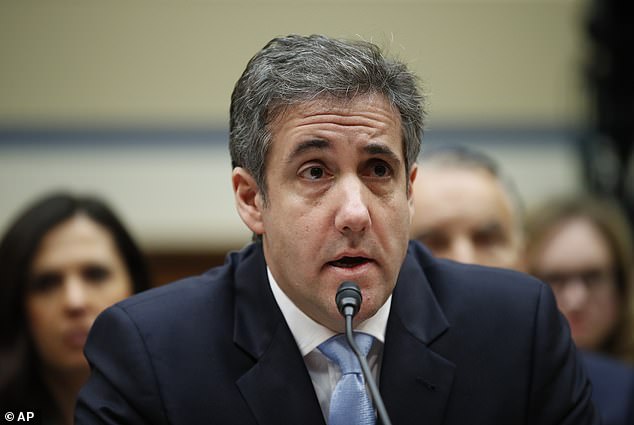 Cohen made a point of including the documents to accompany testimony, where he said Trump was a ‘conman’ and a ‘racist’ – and noted that Trump had demanded that President Obama release his own grades after stoking a conspiracy theory that Obama wasn’t born in the U.S. 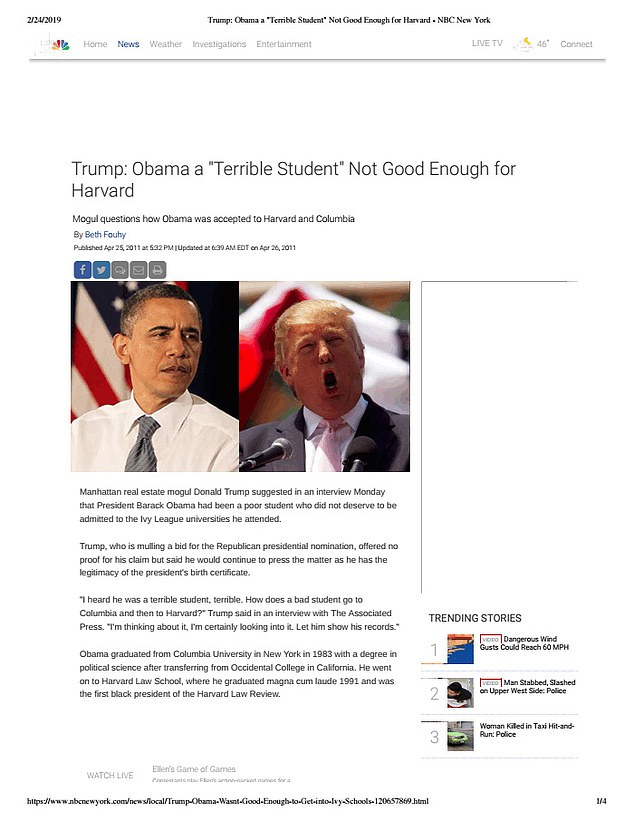 Double standard: Cohen entered an interview which Trump conducted with the Associated Press in 2011 demanding that Obama release his grades as a pointed contrast to what Trump ordered him to do 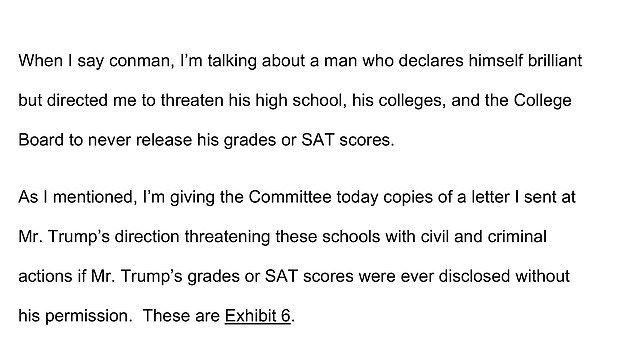 Grades: Unknown. Fellow students say he was a cadet captain,

Wharton School, University of Pennsylvania. Graduated with a BSc in Economics.

Grades: Unknown. there was no sign of his name on the 1968 Dean’s List or indication he graduated with any honors in the Commencement Program

KimThe letter and the wider claim of a scheme to ‘threaten’ those who held his high school and college grades was revealed in Cohen’s testimony, which also contained bombshell revelations about WikiLeaks and a planned Trump tower project in Moscow.

Cohen wrote: ‘When I say conman, I’m talking about a man who declares himself brilliant but directed me to threaten his high school, his colleges, and the College Board to never release his grades or SAT scores.’

‘As I mentioned, I’m giving the Committee today copies of a letter I sent at Mr. Trump’s direction threatening these schools with civil and criminal actions if Mr. Trump’s grades or SAT scores were ever disclosed without his permission,’ the recently-disbarred lawyer continued.

‘The irony wasn’t lost on me at the time that Mr. Trump in 2011 had strongly criticized President Obama for not releasing his grades. As you can see in Exhibit 7, Mr. Trump declared ‘Let him show his records’ after calling President Obama ‘a terrible student.’

Trump during the campaign called himself a ‘very smart guy’ and even touted ‘like, super genius stuff.’

But according to Cohen, the candidate was determined not to allow the release of his grades.

According to the , which interviewed former classmates, Trump ‘rarely shined in class.’

Trump transferred to the school after spending two years at Fordham University, having obtained military deferments from Vietnam.

Cohen did not include any other letters which would have been to both institutions.

Fordham, a private Catholic university, that it had received the letter.

‘Fordham received a follow-up letter from one of Mr. Trump’s attorneys summarizing the call and reminding us that they would take action against the University if we did, in fact, release Mr. Trump’s records,’ a spokesman told the broadcaster.

Cohen also took aim at Trump’s avoidance of military service – and made the point as the president was meeting with the president and prime minister of Vietnam at summit meetings.

‘During the campaign, Mr. Trump said he did not consider Vietnam Veteran, and Prisoner of War, Senator John McCain to be ‘a hero’ because he likes people who weren’t captured,’ Cohen was to testify.

‘At the same time, Mr. Trump tasked me to handle the negative press surrounding his medical deferment from the Vietnam draft. Mr. Trump claimed it was because of a bone spur, but when I asked for medical records, he gave me none and said there was no surgery,’ according to his former fixer, who Trump now brands a liar.

‘He told me not to answer the specific questions by reporters but rather offer simply the fact that he received a medical deferment. He finished the conversation with the following comment. ‘You think I’m stupid, I wasn’t going to Vietnam.’

Cohen was to include the letter as an exhibit to be shared with the committee.

Ruth Bader Ginsburg has TWO cancerous growths removed from her lungs
Lawyer of college football star accused of raping six women after Tinder dates attacks his accusers
Bedridden woman, 67, found inside a filthy home with 10 emaciated puppies
How IKEA is about to change forever: Retail giant to launch mini store
Man woke up with a baseball-sized lump on his elbow caused by flesh-eating bacteria
Starbucks may be coming out with a limited-edition Tie-Dye Frappuccino next week
Jumping space robot can simulate a how a spacecraft flies, experts say
Kurdish fighters in Syria claim Turkey has launched new offensive