The embattled president of Venezuela says the United States is concocting a crisis as a way of starting a war in South America over oil.

Nicolas Maduro was defiant as he spoke to ABC News on Monday in his first interview with American television in years.

The dictator slammed President Trump for recognizing the opposition’s leader Juan Guaido as the country’s ruler and criticized the new sanctions placed on his inner circle.

‘Everything that the United States government has done has been doomed to failure,’ Maduro told .

‘They are trying to fabricate a crisis to justify political escalation and a military intervention in Venezuela to bring a war to South America.’

Maduro spoke to ABC News from the presidential palace in the Venezuelan capital of Caracas. 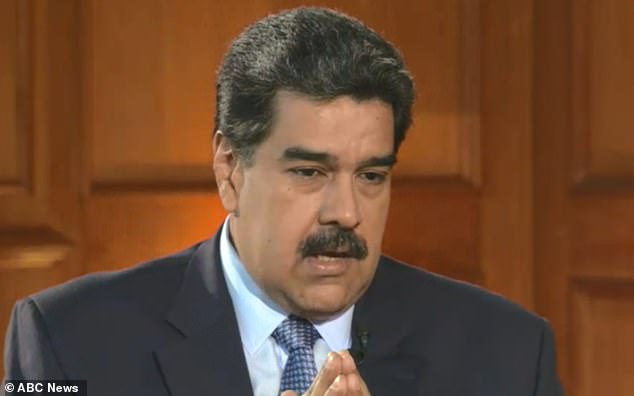 In his first interview with American television in years, Venezuelan President Nicolas Maduro accused the Trump administration of ‘fabricating a crisis to start a war in South America’

Maduro on Monday said Pence’s trip to Bogota was ‘part of the politics to attempt to establish a parallel government in Venezuela.’

The president said the Americans ‘want Venezuela’s oil’ and are ‘willing to go to war for that oil.’

He said Venezuela is a ‘pacifist, humble nation’ which ‘has the right to peace’ and ‘has legitimate institutions.’

‘I, as President of Venezuela, am prepared for a direct dialogue with your government and with you to look for, like the Americans that we are,’ he told ABC News.

‘To look for 21st century solutions not Cold War solutions.

‘The Cold War should stay behind.’

‘We are Democrats that believe in a new type of socialism and we have the right to the diversity of criterion and ideology.

‘And so President Trump should always be ready to see Venezuela’s truth – the other side of the coin and rectify and start a new path.’

Maduro denied claims by human rights groups that his government has engaged in widespread repression.

The Trump administration on Monday announced new sanctions on allies of Maduro as it struggles to find new ways to boost his opponent after an effort to deliver humanitarian aid to the economically devastated nation faltered amid strong resistance from security forces loyal to the socialist leader.

Vice President Mike Pence arrived in the Colombian capital for an emergency summit of regional leaders to discuss the deepening crisis and immediately met with Juan Guaido, the opposition leader the U.S. and 50 other nations recognize as Venezuela’s rightful president. 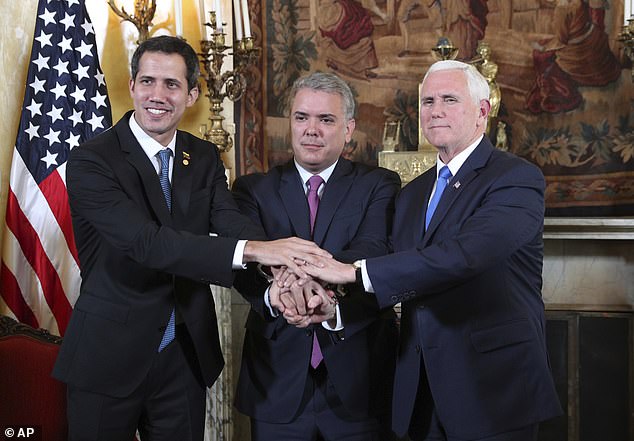 In a speech, Pence urged regional partners to freeze oil assets controlled by Maduro, transfer the proceeds to Guaido and restrict visas for Maduro’s inner circle.

He said the U.S. was imposing more sanctions on four pro-government governors, including a close Maduro ally who negotiated the release of an American jailed for more than two years.

‘It’s time to do more,’ Pence said. ‘The day is coming soon when Venezuela’s long nightmare will end, when Venezuela will once more be free, when her people will see a new birth of freedom, in a nation reborn to libertad.’

Hours later, Venezuela’s government issued a statement accusing the U.S. and the Lima Group countries of conducting ‘a ferocious campaign to oust’ Maduro by trampling on basic international human rights.

Pence’s appearance before the Lima Group comes at an important crossroads for the coalition of mostly conservative Latin American nations and Canada that has joined forces to pressure Maduro.

A month after Guaido declared himself interim president at an outdoor rally, hopes that support for Maduro inside the military would quickly crumble have faded. 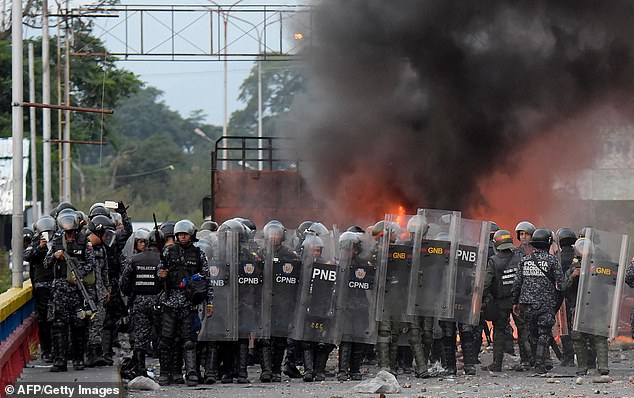 Venezuelan security forces clashe with supporters of Venezuelan opposition leader Juan Guaido on the Venezuelan side of the Francisco de Paula Santander International Bridge, as seen from Cucuta, Colombia, on Monday

Over the weekend, security forces on the borders with Colombia and Brazil fired tear gas and buckshot on activists waving Venezuelan flags while escorting trucks with emergency medical and food kits.

Four people were killed and at least 300 wounded, although only a few were hospitalized.

While Colombian authorities said more than 160 soldiers deserted their posts and sought refuge across the border over the weekend, the highest-ranking among them was a National Guard major.

No battalion or division commanders have come forward to challenge Maduro despite almost-daily calls by Guaido and the U.S. to do so.

That’s left many asking what Guaido and the U.S. can do to break the stalemate.

The Lima Group, in an 18-point declaration signed by 10 nations and Guaido, reiterated their call on the Venezuelan military to recognize the opposition leader as their commander in chief, urged the International Criminal Court to declare Maduro’s aid blockade a crime against humanity and pressed the United Nations to play a bigger role in resolving the crisis.

For now, the U.S. is showing no signs it is considering a military intervention to remove Maduro.

During his visit, Pence repeated Trump’s threat that ‘all options are on the table’ but gingerly avoided talking about the potential for military action.

Man’s attempt to dive off a roof into a swimming pool ends very painfully
Sophisticated solar powered 'drug smuggling' tunnel from Mexico to the US discovered
Michael Avenatti is snubbed by The View and Democrats as Stormy Daniels considers new lawyer
Inside Islamberg, the 30-year-old Muslim enclave deep in the Catskill Mountains
Artists transform models into Game Of Thrones white walkers at this year's make-up championships
French national service teen recruits faint during outdoor ceremony
First Pearl Harbor shooting victim is pictured as gunman is named
'Secret Service of Hollywood' says it could cost $5m a year to protect Harry and Meghan