Tidying expert Marie Kondo was the surprise style star of the 2019 Oscars when she brought a very welcome spark of joy to the red carpet by stepped out at the glittering event in an equally dazzling Jenny Packham gown.

The 34-year-old, whose star has skyrocketed since the release of her series at the start of this year, looked every inch the A-list celebrity as she made an appearance at the 91st , showcasing her slender figure in the beaded floor-length gown.

Marie, who is from Tokyo, , was accompanied on the red carpet by her husband of seven years, Takumi Kawahara, who looked just as dapper in a classic black tuxedo. 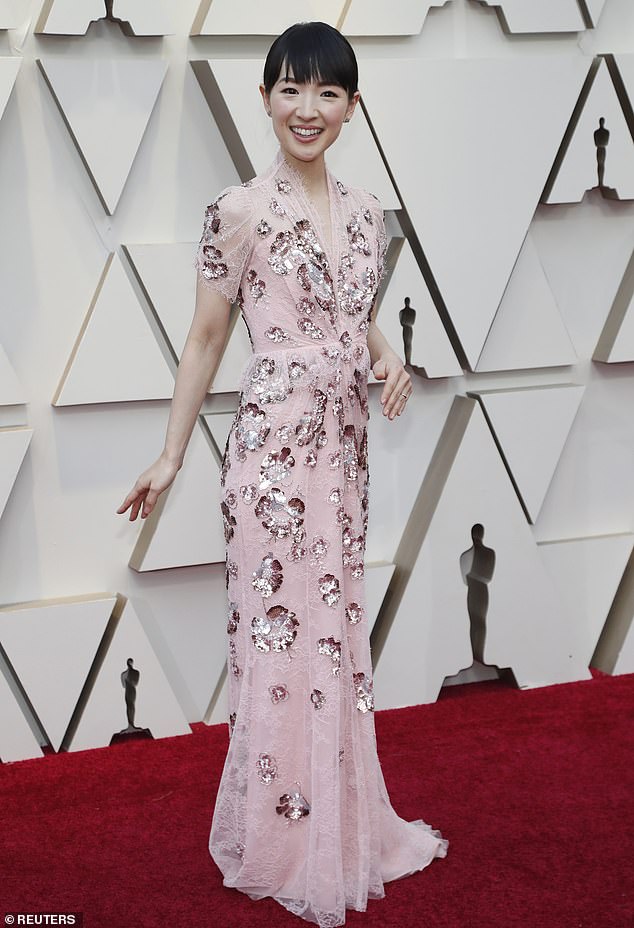 Sparking joy: Tidying expert Marie Kondo made a surprise appearance at the 2019 Oscars

Dazzling: The 34-year-old, who is from Tokyo, looked every inch the A-list star in her floor-length Jenny Packham gown 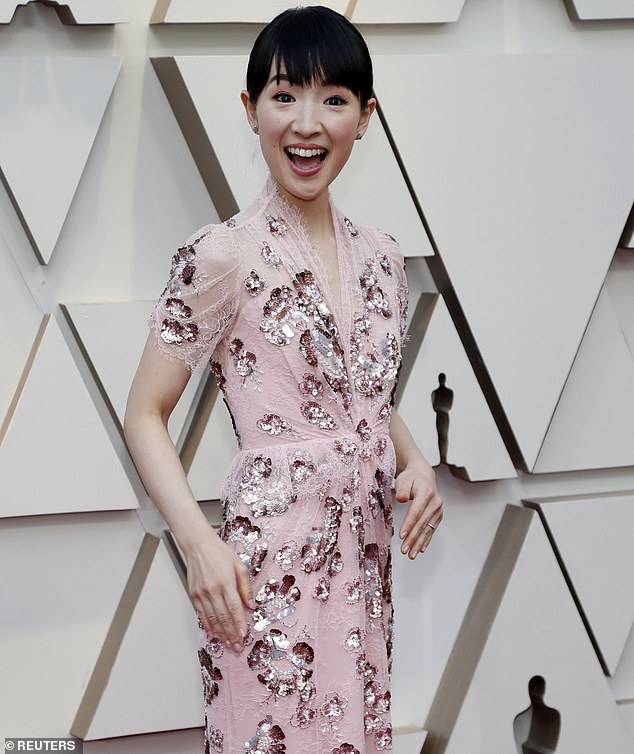 Say cheese! Marie, who first rose to fame in 2011 with the publication of her book The Life-Changing Magic of Tidying Up, looked thrilled to be in attendance at the Oscars 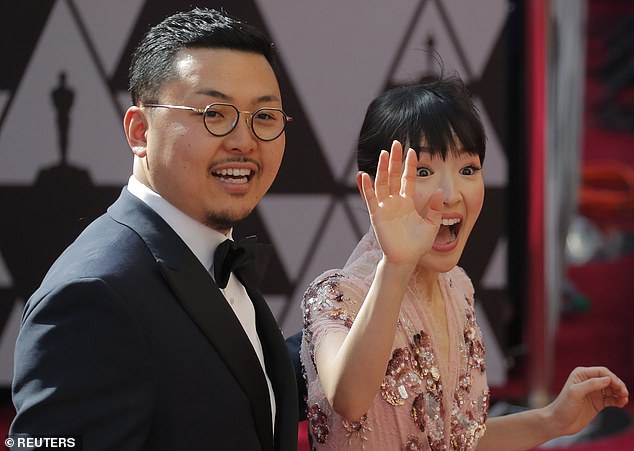 Romance: The mother-of-two was joined on the red carpet by her husband of seven years, Takumi Kawahara, who looked dapper in a classic black tuxedo

The tidying expert, who first rose to global popularity with the publication of her 2011 book The Life-Changing Magic of Tidying Up, looked thrilled to be at the star-studded event, and was pictured smiling widely for the cameras as she took her place on the red carpet.

Marie also couldn’t resist waving to the photographers – and perhaps a few onlookers – at times holding up two hands to wave at as many people around her.

For some of her red carpet appearance, the mother-of-two had a fairly stunned expression on her face, her mouth wide open in surprise as she took in the incredible scenes around her.

Ever keen to streamline and rid herself of items that do not ‘spark joy’ – one of the key principals of her phenomenally popular KonMari tidying method – Marie chose to go without a handbag on the red carpet, and she kept her accessories to a minimum.

However, her dazzling Jenny Packham featured more than enough bling to help her stand out against the crowds as she made her way down the red carpet and into the awards show.

The Netflix star’s chic floor-length dress – which is worth a staggering $6,475 – featured short lace sleeves, a lacy skirt, and a gathered waistline that helped to accentuate Marie’s trim figure.

But the piece de resistance on the gown was the dazzling pink sequin flower embellishments that were dotted across the design from top to bottom, adding some glitz and glamour to her overall look.

Marie also kept her makeup to a minimum, allowing her incredible complexion to shine through with just a light base layer, and some peachy pink blush. 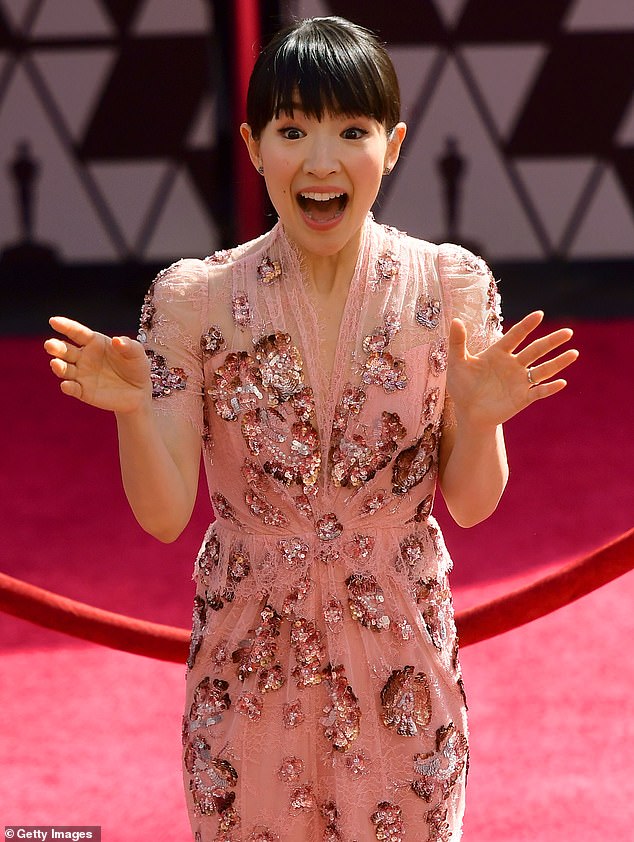 Happy! Marie couldn’t resist waving at the photographers, at time holding up both hands in an elated gesture 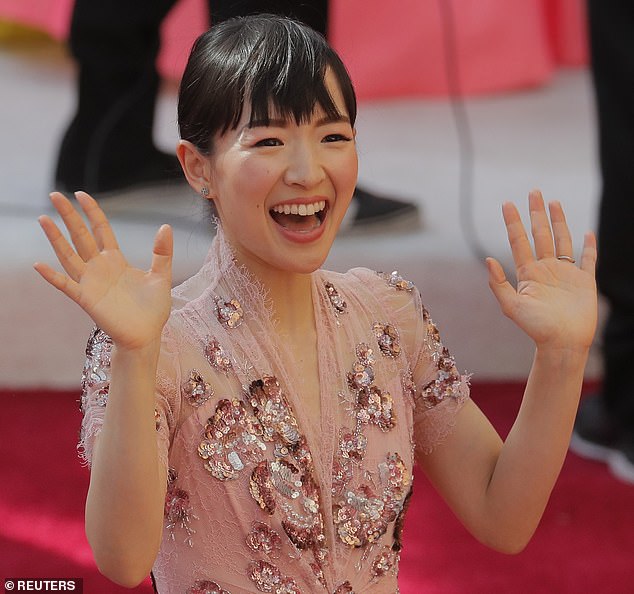 Leading by example: Ever determined to only keep items that spark joy in her life, Marie chose to go without a handbag, and she wore minimal accessories to the event 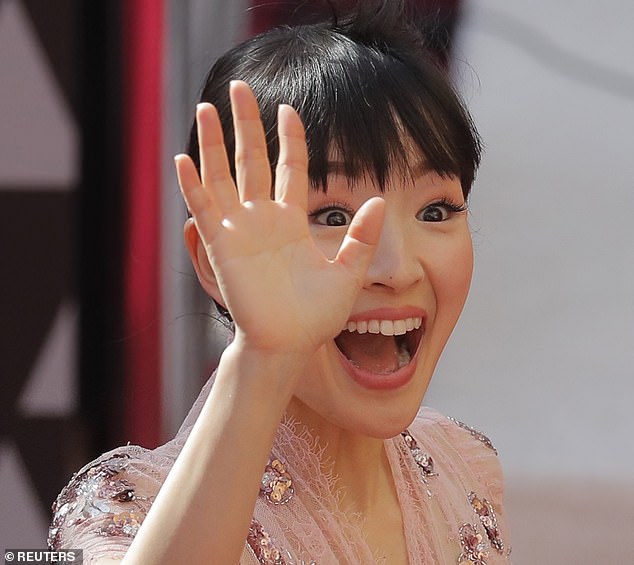 Flawless: The decluttering pro showed off a flawless complexion on the red carpet, with just a hint of blush to accentuate her natural glow 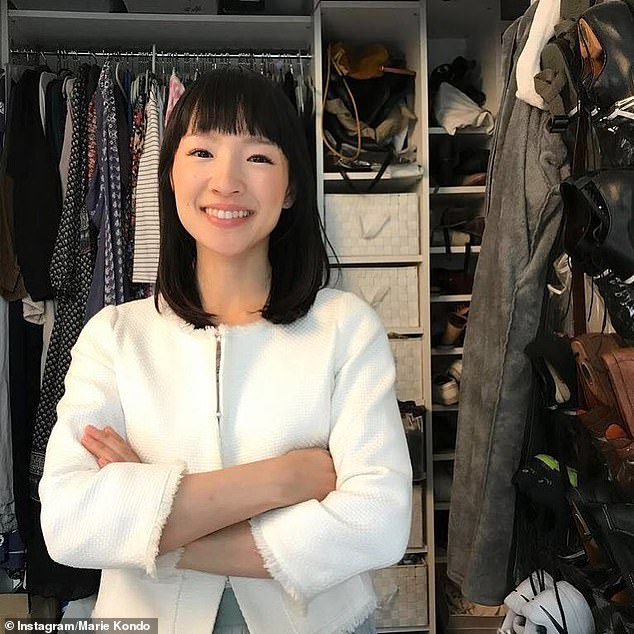 A-lister: Since the debut of her Netflix series Tidying Up With Marie Kondo at the start of this year, the tidying expert has seen her star skyrocket

Earlier this month, the tidying expert’s makeup artist shared the secrets behind Marie’s flawless skin, explaining that she uses the Tatcha Pure One Step Camellia Oil to remove her cosmetics and cleanse her skin, before following up with the THREE Balancing Emulsion to moisturize the skin.

The final steps include a spray of rose water, and a dab of the Herbivore Coco Rose Lip Conditioner.

The Los Angeles based expert told The Cut: ‘In make-up, Japanese beauty emphasizes translucent-looking skin. This can only be achieved by staying away from the sun and following a daily routine of applying a toner and lotion at the end of the day.

The ‘six basic rules of tidying’ according to Marie Kondo

‘Marie religiously practices this basic approach to skin care every day and that’s why she maintains such beautiful skin.’

The KonMari creator’s effortless natural glow was clear for all to see as she made her red carpet appearance at what is thought to be her first ever Oscars – a major event that comes just a few months after her Netflix series, Tidying Up With Marie Kondo, premiered, causing the Tokyo native to skyrocket to global fame.

Marie’s show sees her visiting different American families in order to help them declutter their homes – and their lives – using her incredibly popular tidying method.

Following the premiere of the show on January 1, hundreds of social media users began sharing before and after images of their own tidying efforts, with people very quickly putting Marie’s KonMari Method to use in their own homes.

According to the KonMari Method website, the six ‘basic rules’ of tidying begin with a commitment to tidying up, and end with deciding whether or not an item ‘sparks joy’. If the answer is no, you have to rid yourself of it once and for all – thereby clearing space for the things that help to add happiness to your life.