British tourists may have been behind the stabbing of two ‘doormen’ at a Benidorm nightspot last night, it has emerged.

Initial reports say the casualties are two workers at a popular bar in Calle Majorca in the Little England area of the resort on ‘s east coast.

Two men, said to be Scottish, are believed to have fled the scene – although there is no official confirmation yet. One witness has described the stab wound victims as doormen.

Calle Majorca is the street where a British holidaymaker was shot in the buttocks last July. 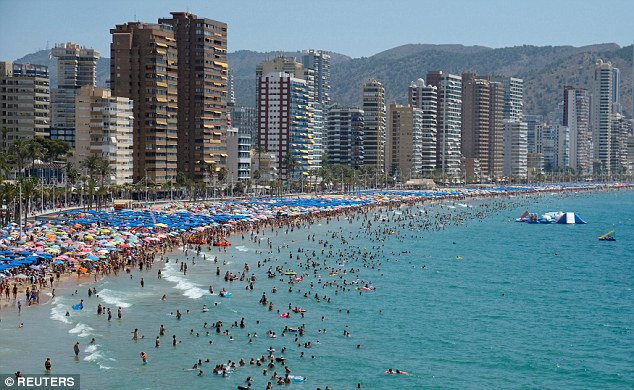 The 42-year-old Briton was caught up in a gang war between North African drug dealers and criminals from Eastern Europe.

Police said in December they had arrested the suspected gunman, describing him as a 42-year-old Serbian and the main leader of a criminal organisation allegedly involved in extortion and settling of scores.

Spain's royal family hike in the Covadonga mountains
Sportsmail compares Tottenham and Liverpool ahead of the Wembley clash
Bachelor Nick 'The Honey Badger' Cummins 'reunited with Cassandra Wood' after finale
Boris Johnson is spotted on bike in London without rear light or a helmet
Base jumper is injured after their 'parachute fails to open' when they leapt off a cliff at Dover
Lingerie expert reveals the best bra for each breast type
Boss who asked a female manager 'Can I Harvey Weinstein your a***?' ordered to pay her £35,000
Donald Trump honors Conan the hero dog that helped corner al-Baghdadi with Rose Garden ceremony