It might feel awkward and ‘un-British’ but haggling is growing in popularity among consumers who are determined to pay less for bills and shopping – with increasing success. 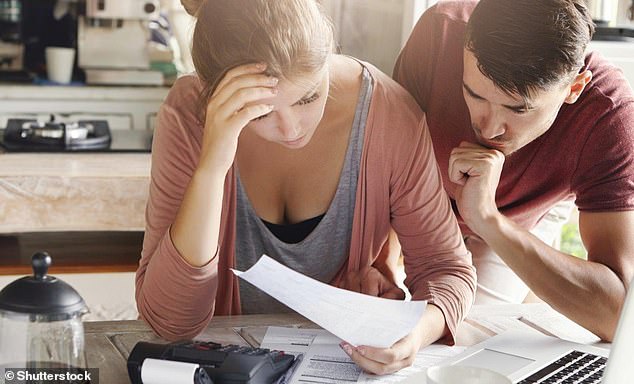 Adam Bullock, UK director of TopCashback, says: ‘A sale at a lower price is still a sale for retailers. With brands finding it harder to attract shoppers to the high street, haggling is becoming easier. Shoppers need to be brave and try their luck.’

The shops where consumers found it easiest to wangle a discount include Carphone Warehouse, John Lewis, Tesco and Debenhams. For service providers the top brands are Sky, Virgin Media, BT Broadband and EE.

Brian Grainger, who lives in the West Midlands, regularly haggles with utility providers including Sky TV and Virgin Mobile.

Recently, while negotiating with his broadband provider EE, Brian managed to get three months for free and bagged a £12 per month discount because there had been a service disruption. 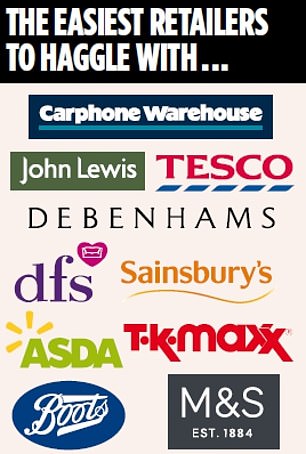 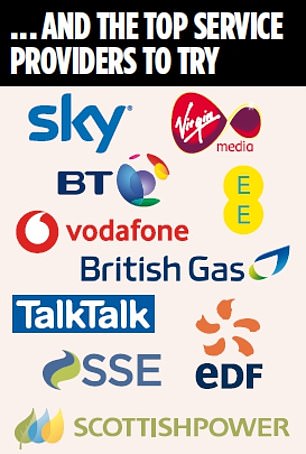 The shops where consumers found it easiest to wangle a discount include Carphone Warehouse, John Lewis, Tesco and Debenhams. For service providers the top brands are Sky, Virgin Media, BT Broadband and EE

The retired 63-year-old’s top tip is to ‘ask for something that could make a real difference to you but doesn’t cost the supplier much at all’. Utility providers in particular should be challenged – as this makes the most significant and longer lasting difference to household budgets.

Bullock says: ‘If you continue with your contract without questioning the price you’re paying, a provider is rarely going to offer you something better. Put your provider at risk of losing business and it will usually result in them miraculously finding you a better deal.’

However, according to a separate survey by moneysaving website MyFavouriteVoucherCodes, more than a quarter of people have never tried haggling – either due to fear or because it simply never occurred to them.

Website founder Julian House says: ‘The fact so few people haggle for insurance or utility discounts with a provider is a real shame because there can be massive savings here.’

HOW TO NEGOTIATE WITH NERVE

The key to successfully snipping prices or adding something for nothing boils down to research, manner and determination.

House adds: ‘Haggling requires confidence, a little bit of cheek and a clear idea as to the maximum price you are prepared to pay for something if not the asking price.’

Advice from those who have succeeded includes looking up prices from rivals, charming the sales staff and timing the task for quieter moments when it is more important for a retailer to attract business.

Finally, if a company will not budge on price try asking for something extra as a freebie instead. This could be free calls on a phone contract or a voucher towards your next purchase.

Would-be hagglers who still feel a bit chicken-livered could try . The company encourages people using its website to check if fellow customers are paying less for the same deal with the same provider.

Those who are overpaying can rely on the service to haggle on their behalf, or it will give the tools to help consumers do it themselves. As an example it helped one customer who had been with BT for more than 20 years to challenge the telecoms provider. Two days later £764 was knocked off his annual bill.

IsMyBillFair’s analysis of nearly 16,000 customer bills recently showed that most people are paying more for basic internet speeds into their home than it costs for a faster connection with the same provider.

Bargaining online is another way to overcome the fear barrier – often customers can discuss their accounts and ask for cheaper deals using their provider’s ‘web chat’ services instead of talking over the phone or face to face.