She has been the star everyone looks to at all the biggest Milan Fashion Week catwalks.

And Kaia Gerber ruled the runway once again when she took to the catwalk alongside  and Cara Delevingne for Prada’s show, in on Thursday.

Cindy Crawford’s daughter, 17, rocked a kooky mismatching attire for the designer show as she caught the eye with her skirt’s crocheted rose bouquet.

Colourful crochet roses were fashioned into a bouquet and stitched into the left side of the knee-length olive green skirt for an eye-catching effect.

Kaia toted a smart-looking green handbag to pick out the olive shade of her skirt as she showcased the Autumn/Winter 2019/20 collection.

Striding down the catwalk with the same confidence as her fashion icon mum Cindy Crawford, the model sauntered out in long lace-up boots.

Sheer delight! Also on the catwalk, Gigi made an exhibition of her underwear and her pins in her sheer skirt which was embossed with a series of roses

Having trumped her mum on scooping her first VOGUE cover at a younger age, it is no wonder Kaia has been fronting all of the Milan Fashion Week shows.

Also on the catwalk, Gigi Hadid made an exhibition of her underwear and her pins in her sheer skirt which was embossed with a series of roses.

The catwalk queen contrasted her very feminine lace skirt with a khaki green military jacket and a bright blue shirt. 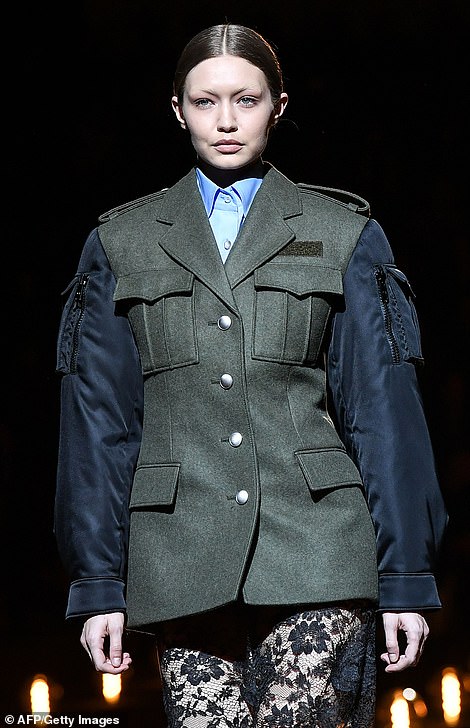 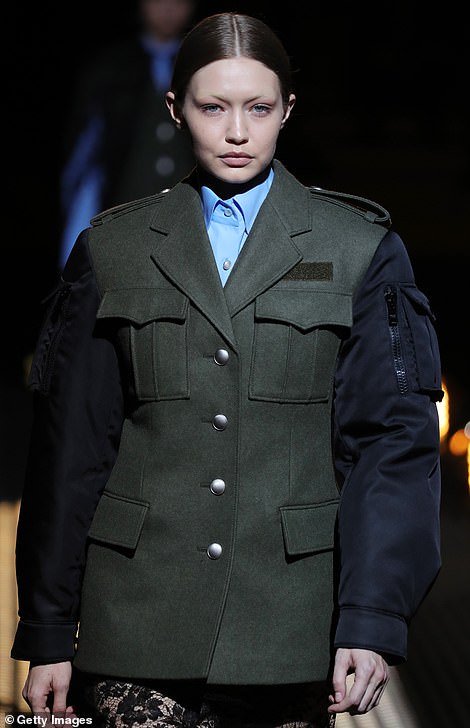 Striking: The model-turn-actress returned to the catwalk with a very edgy Halloween-inspired jumpsuit paired with lace-up boots 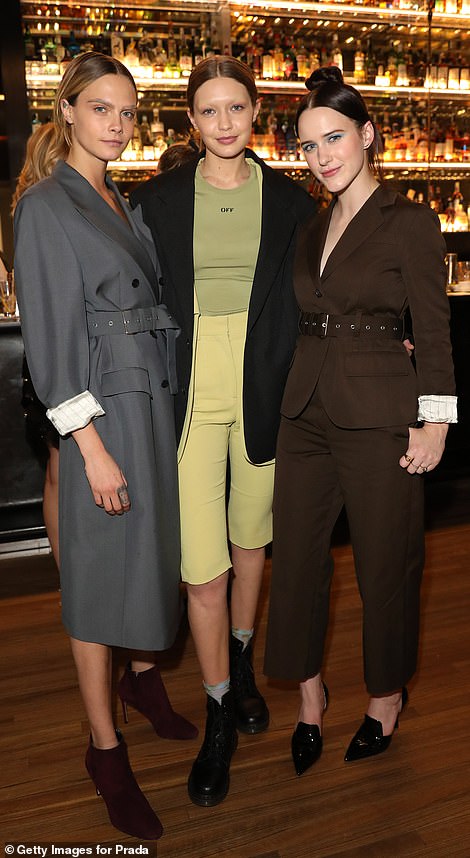 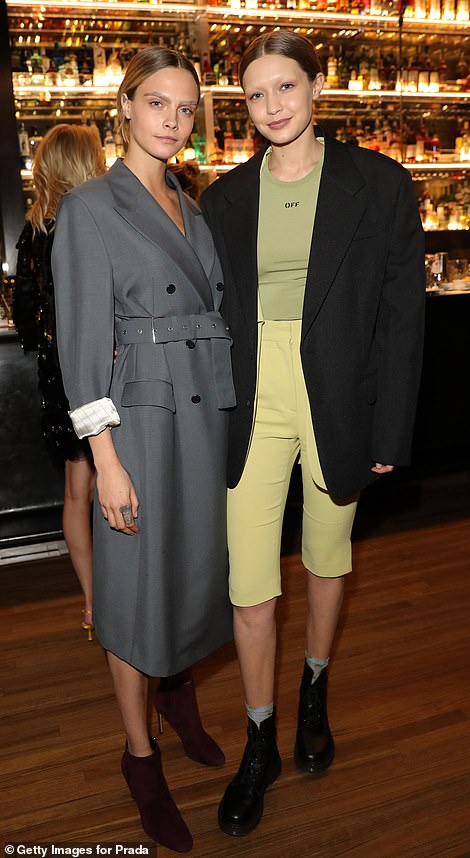 What a difference!: After the show, Cara, Gigi and Rachel Brosnahan posed for pictures in their own ensembles (L-R)

Cara Delevingne was a spooky spectacle when she graced the catwalk in a Frankenstein and his bride-inspired garb.

The model-turn-actress returned to the catwalk with a very edgy Halloween-inspired jumpsuit paired with lace-up boots.

All of the models walking in the show put make-up on to cover their eyebrows.

Poppy Delevingne shimmered in a disc minidress as she headed to the front row to support her sister on the runway. 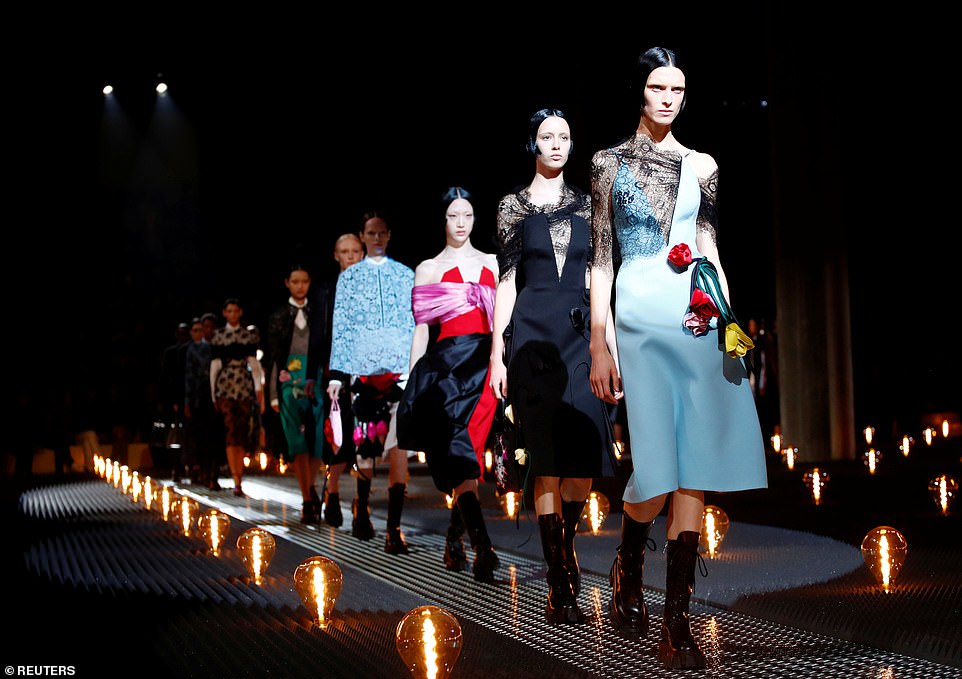 Wow: The audience were treated to a collection of colourful ensembles as models walked the runways

Glittering girl: Cara’s sister Poppy Delevingne shimmered in a disc minidress as she headed to the front row to support her sibling on the runway 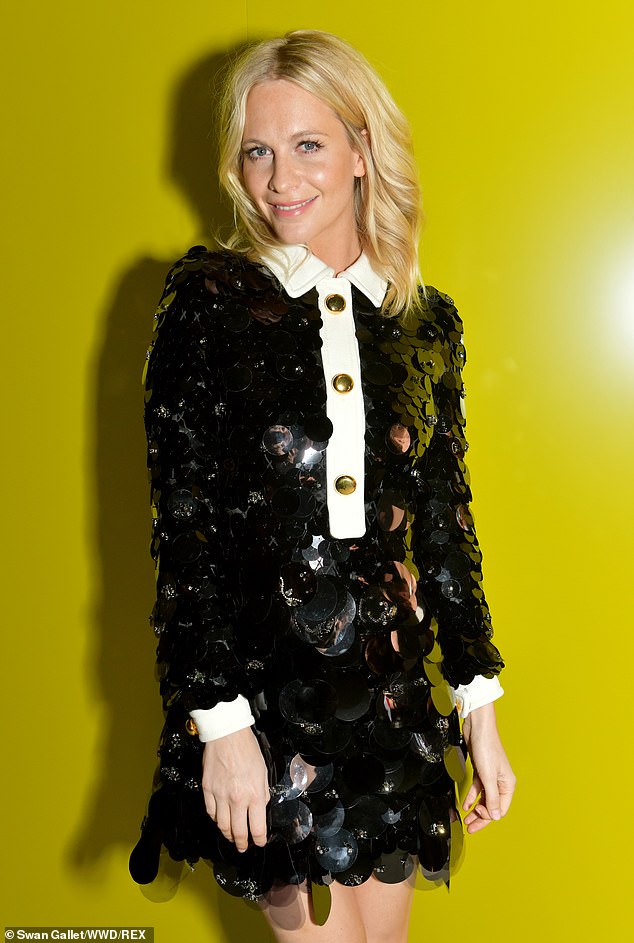 Update your LBD with an embellished number like Poppy’s

Meanwhile, Cara’s big sister, Poppy, showed her support from the FROW. She was decked out in an LBD by the label, teamed with heels and minimal jewellery.

We have fallen hard for this number. It’s based on a design from Prada’s SS19 collection, and features a button-down front, contrast trim and all-over disk embellishment. Simply stunning!

Feeling incredibly inspired, we have scoured the web for similar designs and listed our favourite finds in the carousel below. With options starting at just £25, you really can’t go wrong!

Keen to see more from Prada? Click (right) to shop the current line at NET-A-PORTER.

Off the catwalk, Kaia was joined by her beau Wellington Grant in Milan ahead of her appearances on all of the hottest runways.

The new rumoured couple were spied out together holding hands for the first time on Valentine’s Day in New York City.

Similar to Kaia, Wellington has made a mark on the modelling spheres as he models for Wilhelmina Grant in New York and Elite in Paris and Milan. 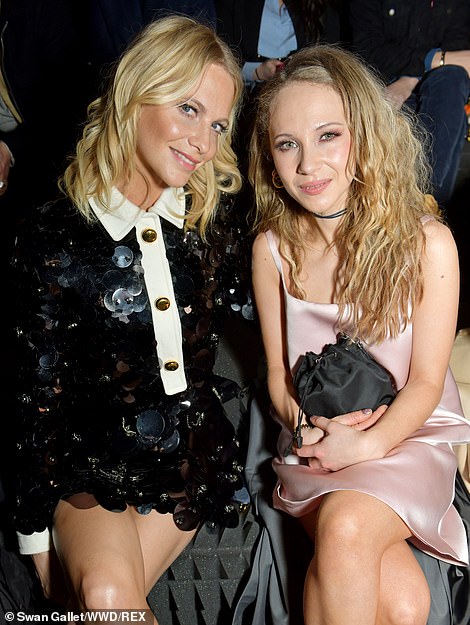 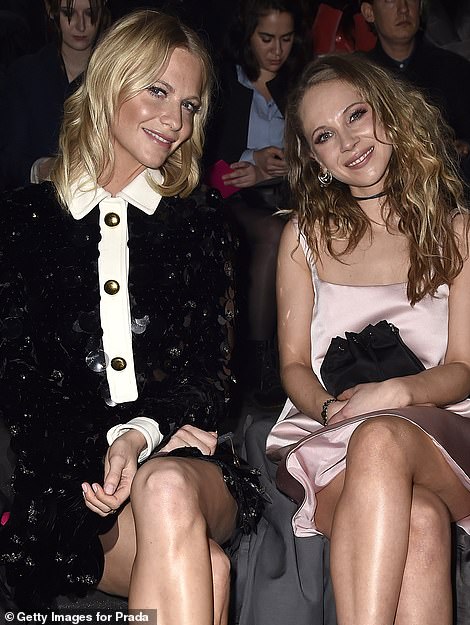 FROW: Poppy joined her pal, Juno Temple, as they sat on the front row supporting her sister Cara on the runway 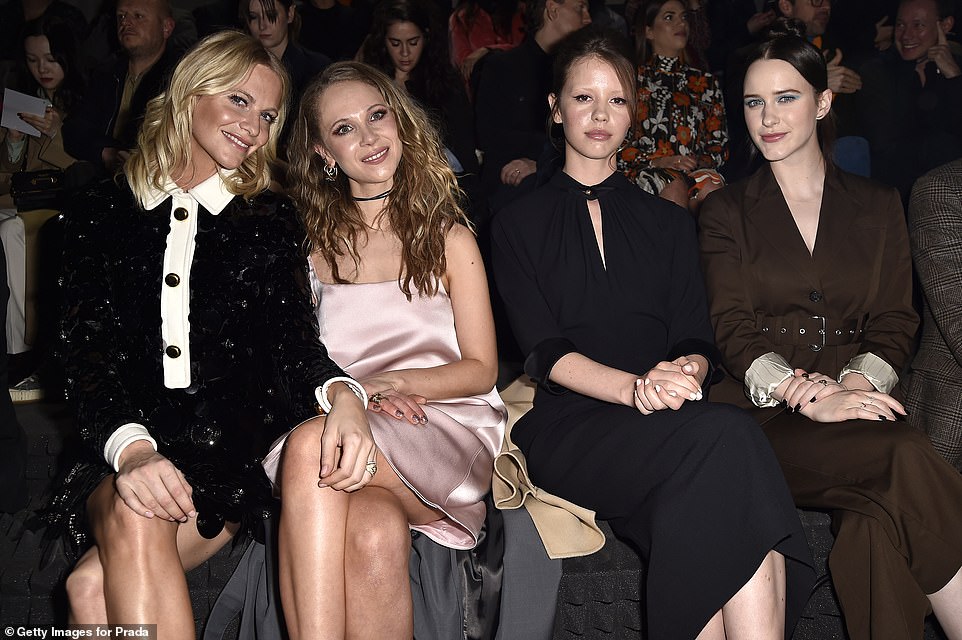 Leading ladies: Also sitting FROM were the likes of Mia Goth and Rachel Brosnahan (right)

Elegant: Mia looked elegant in a plunging black cape-like dress as she teamed it with red high heels and a matching handbag 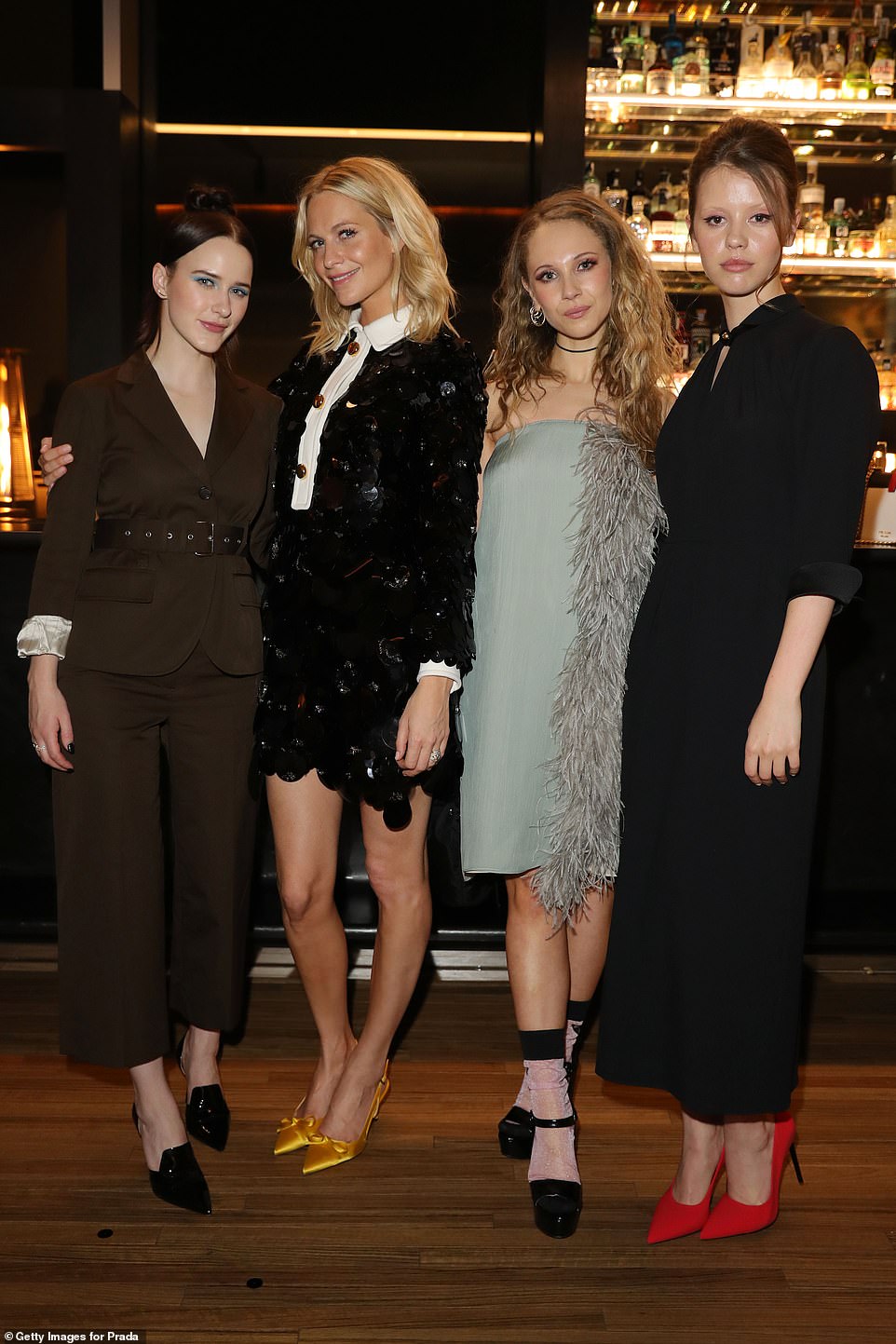 Gal gang: Rachel, Poppy, Juno and Mia later posed for a glamorous picture together after the show 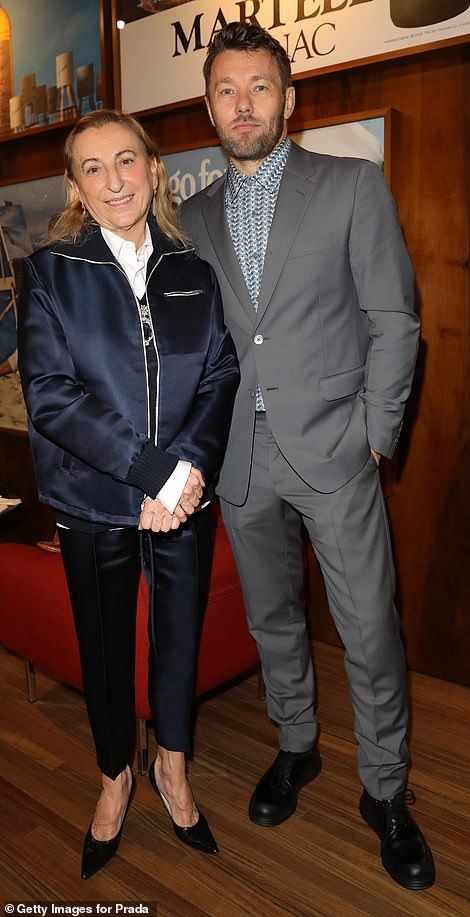 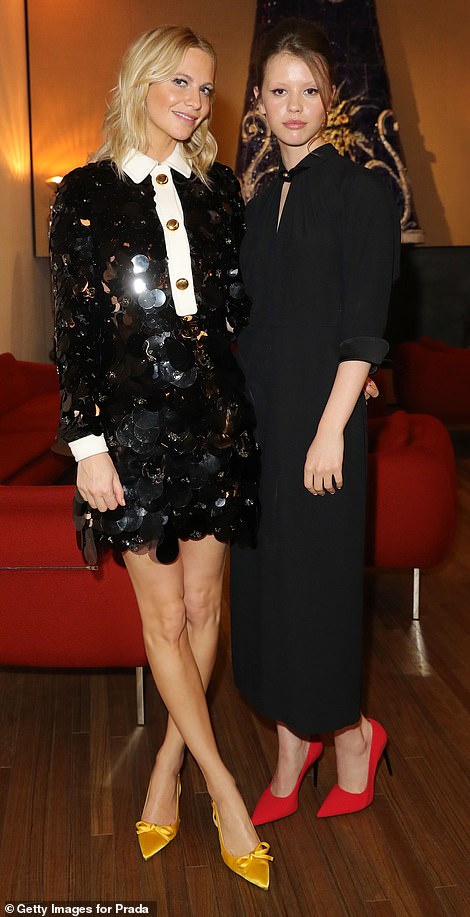 Star-studded: Miuccia Prada and Joel Edgerton were also pictured at the event alongside Poppy and Mia (L-R) 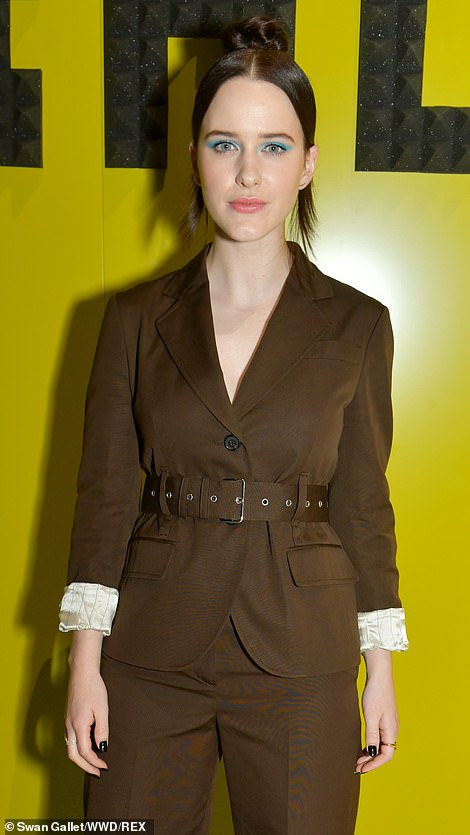 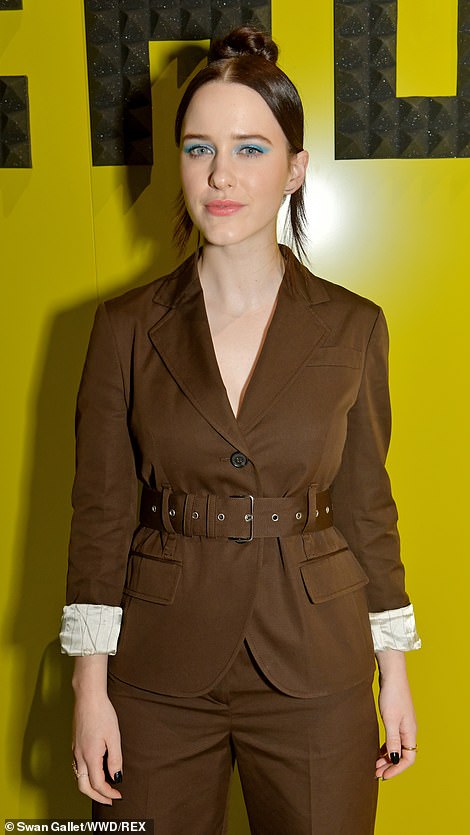 Chic: Rachel looked chic in a plunging brown trouser suit with a studded waist belt, she added a slick of make-up which included a bold blue eye shadow

Kate Moss looks fresh-faced as she makes an elegant appearance in NYC in a sleek black suit
Love Island SPOILER: 'You're a bare-faced liar and a coward!' Livid Maura RAGES at Tom
Love Island's Maura Higgins makes her This Morning debut
Idris Elba reveals he and wife Sabrina have passed coronavirus quarantine period
Total Bellas: Nikke Bella creates 'vision board' for unemployed dancer boyfriend Artem Chigvintsev
Tallulah Willis showcases her toned physique in a black bikini as she celebrates her clothing launch
Britney Spears' ex Kevin Federline 'not concerned about leaving sons with singer' amid movement
David Tennant reveals he and wife Georgia were worried son Ty would be 'rubbish' at acting