The extinction of the dinosaurs may have been caused by a combination of a huge asteroid landing on Earth and a series of enormous volcanic eruptions.

It is commonly believed that an asteroid pummelled into Earth 66 million years ago and vast plumes of dust were thrown into the atmosphere and blocked sunlight.

This prevented plants from photosynthesising and starved life of all food and created ecological devastation across the globe.

Two new studies have accurately dated lava flows around the world and found the Earth was in a period of extreme volcanic activity at almost the exact same time the meteor landed and formed the Chicxulub crater, off the coast of Mexico. 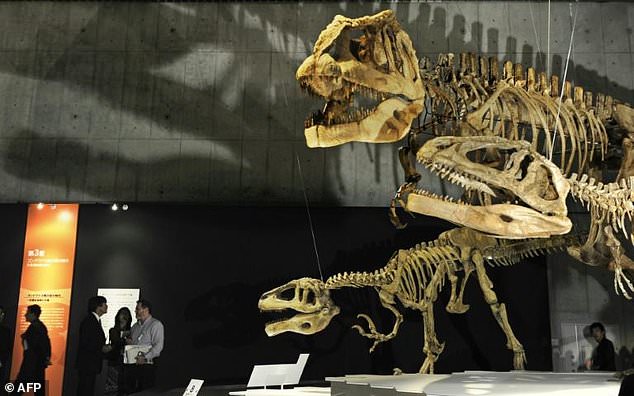 Every school child knows the dinosaurs were killed off by an asteroid smashing into the Earth some 66 million years ago. But scientists say the story may not be quite that simple. Dinosaur skeletons on display at Tokyo’s Science Museum

Before the 1980s, the dominant theory had been that huge and prolonged volcanic eruptions caused a rapid and deadly shift in the planet’s climate by sending vast clouds of ash, gas and dust into the atmosphere.

Then scientists discovered the huge Chicxulub crater of an ancient asteroid impact off the Caribbean coast of Mexico, which they posited had sent so much debris into the atmosphere that it hampered photosynthesis in plants and killed off three-quarters of life on Earth.

Ever since, scientists have maintained a lively debate about the relative contribution of each cataclysmic event to the mass die-off.

The authors of the two reports were able to date massive lava flows with far greater precision, whittling it down from around a million years to a period of tens of thousands of years.

‘We are able to recreate with great precision the order of events at the end of the Cretaceous period,’ Loyc Vanderkluysen, a professor of geoscience at Drexel University in Philadelphia, told AFP.

He was part of a team that dated the vast lava flows known as the Deccan Traps in India using radiation measurements. The other team used a different dating method.

The argon-argon dating method narrowed down the volcanic event to within 50,000 years of the calculated date of 66,052,000 years ago.

On the geological timescale – this places the timing of the volcanic activity and the asteroid impact at the same time.

The expulsion of lava there over a million years left the Deccan flows more 4,000 feet (1,200 metres) thick in places today, a volume large enough to cover an area the size of France to a depth of several hundred meters, he said. 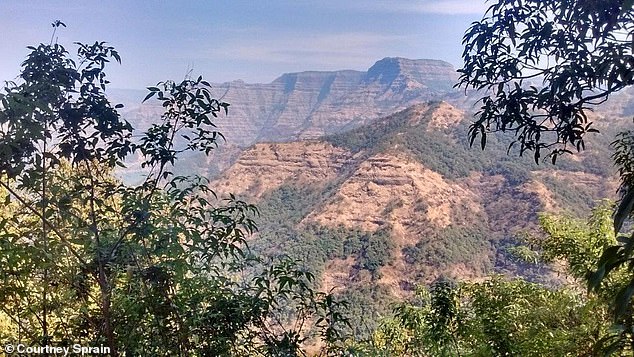 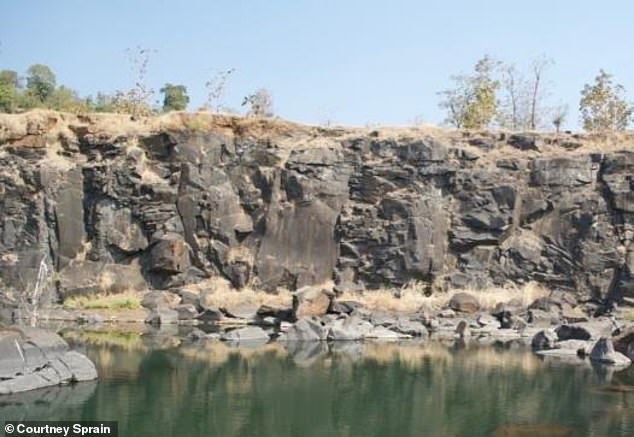 An inflated sheet lobe in the Jawhar Formation in a quarry north of Mumbai, India. Evidence from here found the extinction of the dinosaurs may have been caused by a combination of a huge asteroid landing on Earth and a series of enormous volcanic eruptions

WHAT KILLED THE DINOSAURS?

The collision released a huge dust and soot cloud that triggered global climate change, wiping out 75 per cent of all animal and plan species.

The new dating made by the two teams match up: one found that a ‘pulse’ of volcanic eruptions occurred just before the mass extinction.

The other is less precise but suggests that the majority of lava flows came after the asteroid hit Earth, backing up the idea that the impact triggered an earthquake so massive it would have registered 11 on the moment magnitude scale, something never witnessed by humans.

That in turn set off a wave of volcanic eruptions that lasted some 300,000 years.

‘That bolsters the theory that the impact was the main cause,’ said Professor Vanderkluysen.

‘It’s like shaking a bottle of Orangina, it can accelerate volcanic activity.’

The close correlation of the two events — eruptions and extinction — is unlikely to be a coincidence, the researchers say.

Other periods of intense volcanic activity have coincided with mass extinction events said Blair Schoene, a professor of geosciences at Princeton and a co-author of the other study.

‘The main take-home point is that it’s not that simple. Nature is complicated,’ he added. ‘By studying both phenomenons in as much detail as possible, we can try and figure out what the whole story is.’

Mapping the timeline of that long-ago mass extinction is crucial, Schoene said, to understanding the consequences of the current so-called ‘sixth extinction,’ which humans are currently causing.

The full findings were published in the journal . 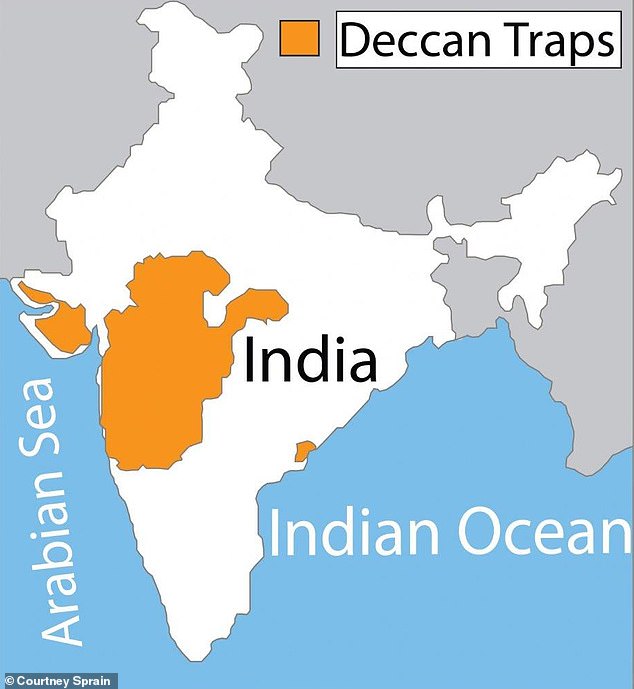 Map outlining exposed areas of the Deccan Traps in modern day India. Accurate dating of the lava found it was created at the same time the asteroid hit Earth

Five times, a vast majority of the world’s life has been snuffed out in what have been called mass extinctions.

End-Ordovician mass extinction
The first of the traditional big five extinction events, around 540 million years ago, was probably the second most severe. Virtually all life was in the sea at the time and around 85% of these species vanished.

Five times, a vast majority of the world’s life has been snuffed out in what have been called mass extinctions. The most famous may be the End-Cretaceous, which wiped out the dinosaurs. Artist’s impression

End-Permian mass extinction (the Great Dying)
The largest extinction event and the one that affected the Earth’s ecology most profoundly took place 252 million years ago. As much as 97% of species that leave a fossil record disappeared forever.

End-Triassic mass extinction
Dinosaurs first appeared in the Early Triassic, but large amphibians and mammal-like reptiles were the dominant land animals. The rapid mass extinction that occurred 201 million years ago changed that.

An asteroid slammed down on Earth 66 million years ago, and is often blamed for ending the reign of the dinosaurs.