Democratic Rep. Alexandria Ocasio-Cortez went on a furious  rant Wednesday in defense of her attacks on Amazon and slamming critics for going after her ‘intelligence’ and ‘understanding’ of the matter.

The most high-profile defender of the deal was New York mayor Bill de Blasio, who said that Amazon’s opponents did not understand it – although both he and Ocasio-Cortez have avoided naming each other.

On Wednesday she tweeted: ‘Frankly, the knee-jerk reaction assuming that I ‘don’t understand’ how tax giveaways to corps work is disappointing.

‘No, it’s not possible that I could come to a different conclusion. The debate *must* be over my intelligence & understanding, instead of the merits of the deal.’

Ocasio-Cortez, the youngest member of Congress and a self-described socialist, had come under fire from both Democrats and when she argued the $3 billion in tax breaks offered to Amazon to build a second headquarters in Queens, New York, would be better spent hiring teachers and fixing the city’s crumbling subway system. 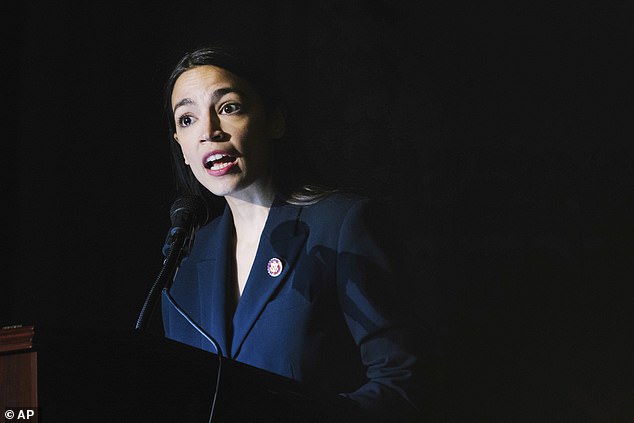 Democratic Rep. Alexandria Ocasio-Cortez went on a furious twitter rant in defense of her attacks on Amazon 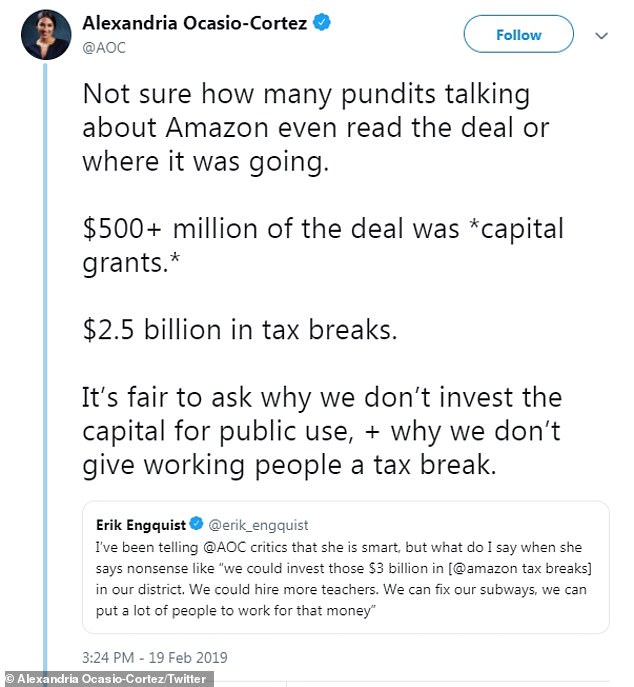 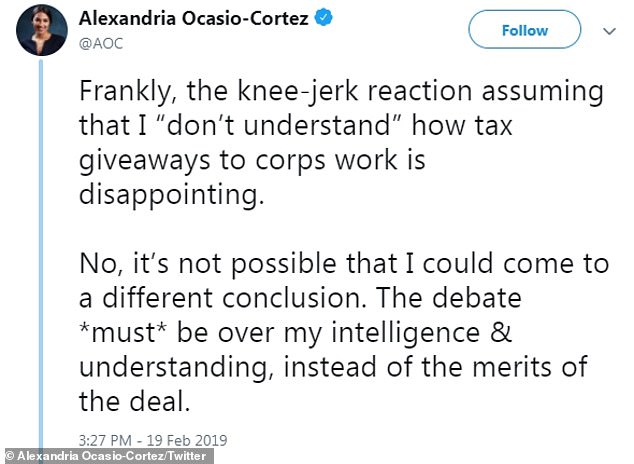 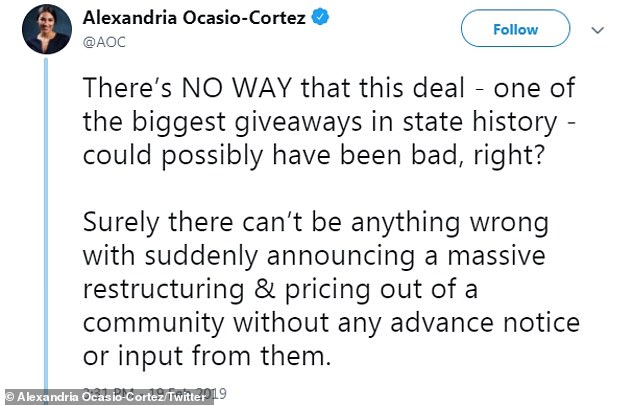 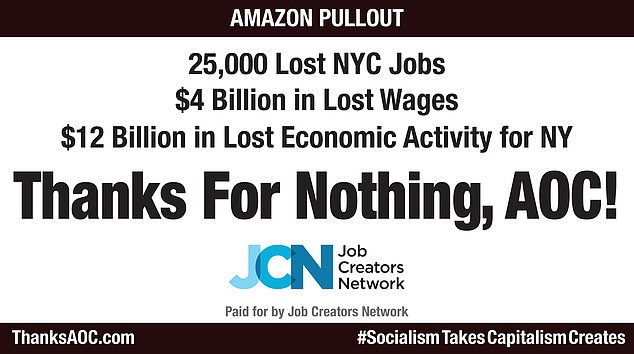 Trolled in Times Square: This billboard was put up in the center of New York city to attack Alexandria Ocasio-Cortez

Her prolonged ranted included a thread of seven tweets that repeatedly defended her mental prowess on the issue and ended on a whimsical note with a shrugging girl emoji.

Specifically, the online retailer would have received $897 million from the city’s Relocation and Employment Assistance Program (REAP) and $386 million from the Industrial & Commercial Abatement Program (ICAP), according to ’s analysis of the deal.

Both of those are tax credits – if Amazon reached 25,000 new jobs, it would not have to pay that amount in tax.

The company would also net an additional $505 million in a capital grant – which is actual cash –  and $1.2 billion in ‘Excelsior’ credits if its job creation goals were met.

That brought the total amount of public funds in the form of expenditure and tax credits to $2.988 billion – or to put it another way – $48,000 per job.

In return, officials predicted Amazon would generate $27.5 billion in state and city tax revenue over 25 years. This is based on the assumption that after the company started hiring in 2019, it would create 25,000 jobs over the next decade at an average salary of $150,000.

The company also agreed to build a new school with as many as 600 seats on its campus, along with a tech startup incubator.

‘Not sure how many pundits talking about Amazon even read the deal or where it was going. $500+ million of the deal was *capital grants.* $2.5 billion in tax breaks. It’s fair to ask why we don’t invest the capital for public use, + why we don’t give working people a tax break,’ she wrote.

She added: ‘There’s NO WAY that this deal – one of the biggest giveaways in state history – could possibly have been bad, right? Surely there can’t be anything wrong with suddenly announcing a massive restructuring & pricing out of a community without any advance notice or input from them.’

She repeatedly slapped back at those who questioned her intelligence about the issue.

‘There’s no CHANCE that the speculative insider real-estate buys that were creating immediate spikes in rent in one of the most rent-burdened communities in NYC could have possibly been unpopular?,’ she wrote.

‘Or that a technology giant of big-brother-esque potential was selling (notoriously flawed & racially biased) facial recognition technology to ICE while trying to move into 1 of the most immigrant-dense areas of the world? No, it must be because I’m dumb,’ she added.

And she got in a final word: ‘Folks handling the failed deal treated community w/condescension+disdain for their legitimate concerns. I warned early to any & all that surging NYC costs+failing subways are creating major political forces to be reckoned with. But I don’t know what I’m talking about, right?’

Ocasio-Cortez had long been a strong opponent to Amazon’s plans, citing rent hikes and local displacement – as seen around the tech firm’s headquarters in Seattle – as grounds for why New York City should reject the company’s proposal.

She reacted with glee on Thursday to Amazon’s announcement it would not relocate to Queens after all, tweeting: ‘Anything is possible: today was the day a group of dedicated, everyday New Yorkers & their neighbors defeated Amazon’s corporate greed, its worker exploitation, and the power of the richest man in the world.’

She opposed the move for its massive tax incentives, previously tweeting such money could be used towards improving the city’s crumbling subway system and investing in local communities.

‘If we were willing to give away $3 billion for this deal, we could invest those $3 billion in our district ourselves, if we wanted to. We could hire out more teachers. We can fix our subways. We can put a lot of people to work for that money, if we wanted to,’ she told reporters said last week.

Amazon pushed the blame back on her and other opponents, saying they had created a hostile ‘environment’ for the company.

Speaking out about the withdrawal on Friday, Amazon’s head of policy communications, Jodi Seth, pointed blame at Ocasio-Cortez and her anti-Amazon rhetoric.

‘If you talk to Alexandria Ocasio-Cortez, it’s ‘Never Amazon,” she said. 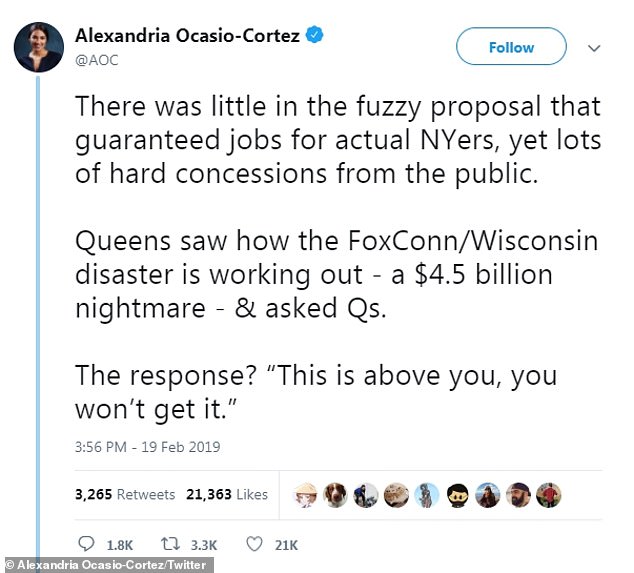 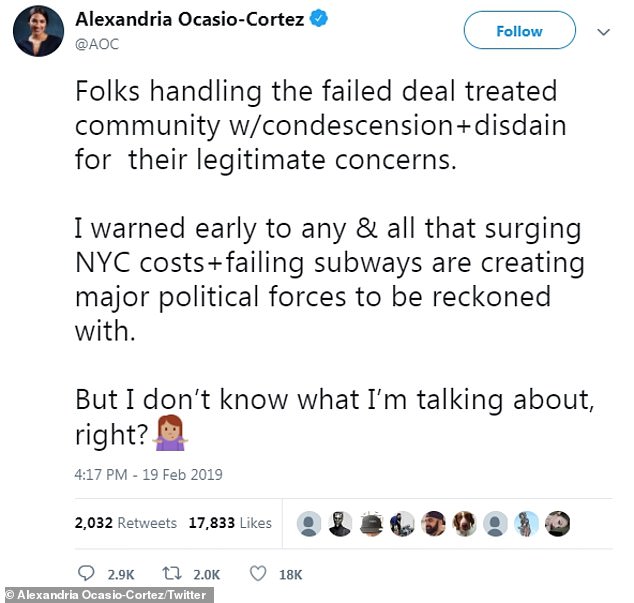 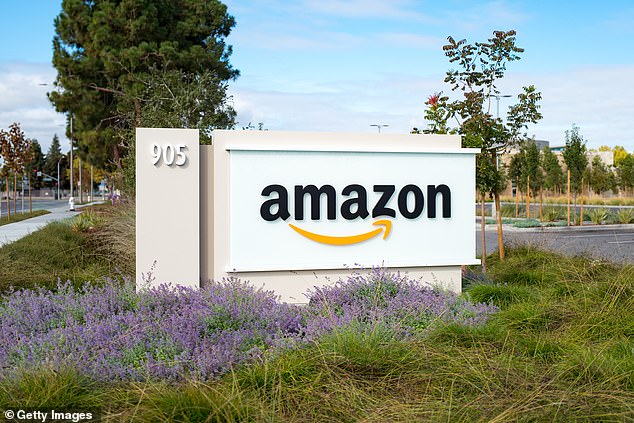 A furious Cuomo said  ‘tremendous damage’ had been done by self-serving politicians in the state.

‘A small group of politicians put their own narrow political interests above their community — which poll after poll showed overwhelmingly supported bringing Amazon to Long Island City — the state’s economic future and the best interests of the people of this state,’ Cuomo said.

‘The New York State Senate has done tremendous damage. They should be held accountable for this lost economic opportunity,’ he added.

Amazon’s sprawling 8 million square feet campus was projected to bring an estimated 25,000 jobs to the area, with the city dangling a $3 billion tax break as collateral.

The plan was announced last November and would have created over $10 billion in revenue over the next 20 years.

Cuomo said the city lost a golden opportunity to be ‘an emerging center for tech’ and previously said the Amazon move was ‘an extraordinary economic win not just for Queens and New York City, but for the entire region, from Long Island to Albany’s nanotech center.’

Mayor Bill De Blasio released a statement on Thursday as well, but placed the blame on Amazon for ‘throwing away’ the opportunity rather than blaming politicians.

‘You have to be tough to make it in New York City. We gave Amazon the opportunity to be a good neighbor and do business in the greatest city in the world,’ de Blasio said in the statement.

‘Instead of working with the community, Amazon threw away that opportunity. We have the best talent in the world and every day we are growing a stronger and fairer economy for everyone. If Amazon can’t recognize what that’s worth, its competitors will,’ he added.

Between himself and Cuomo, the pair had brushed aside their differences to come together and bring Amazon to the East Coast. 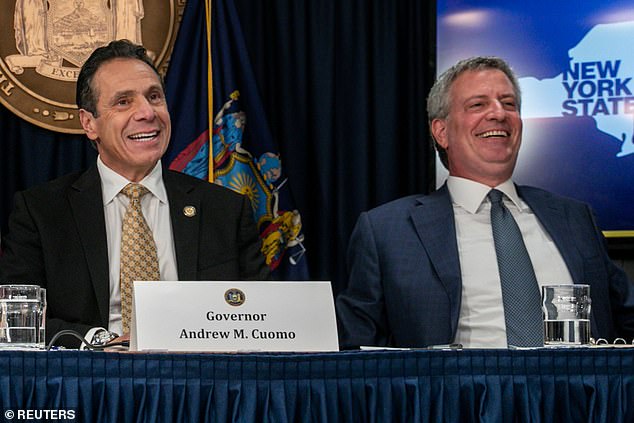 The decision was a serious blow to Mayor Bill de Blasio (right) and New York Governor Andrew Cuomo (left), who had both lobbied intensely to land the campus within city limits. They are pictured at the news conference announcing the headquarters last year

According to a December poll conducted by Quinnipiac University, 57 percent of New York City residents supported Amazon’s plans to move to queens. Just 26 percent opposed the proposal, according to Fox.

Amazon announced its cancelled plans on Thursday in a statement saying, ‘We are disappointed to have reached this conclusion – we love New York.’

‘For Amazon, the commitment to build a new headquarters requires positive, collaborative relationships with state and local elected officials who will be supportive over the long-term.

‘While polls show that 70 percent of New Yorkers support our plans and investment, a number of state and local politicians have made it clear that they oppose our presence and will not work with us to build the type of relationships that are required to go forward with the project we and many others envisioned in Long Island City.’

The online retail giant announced its plans back in November to build the complex in Queens as one of two new headquarters. The other is planned for northern Virginia. Nashville, Tennessee was a finalist that was awarded a consolation prize of a 5,000-employee location.

Amazon said on Thursday it did not plan to re-open the yearlong search that drew 238 proposals from cities across North America.

‘We will proceed as planned in Northern Virginia and Nashville, and we will continue to hire and grow across our 17 corporate offices and tech hubs in the U.S. and Canada,’ the company said Thursday.