Monday morning’s marmalade-dropper, when seven of his MPs renounced the Labour whip in disgust, was a seismic moment for his leadership – but it doesn’t seem to have left a mark on .

Having deposited his two string sacks of allotment potatoes elsewhere, he pitched up at yesterday’s National Manufacturing Conference with a cocksure gait and a cheery grin. His professorial beard was neatly trimmed, his tie (full-blooded Socialist red, of course) uncharacteristically straight and his hair, for once, given a decent rake of the comb.

He dismissed his Gang of Seven deserters with an airy wave of the hand. He was ‘disappointed’ he told the audience at Westminster’s QE2 centre. ‘A small number of MPs have chosen to take a different path,’ he said. They were elected to carry out his policies but ‘decided to go somewhere else.’ 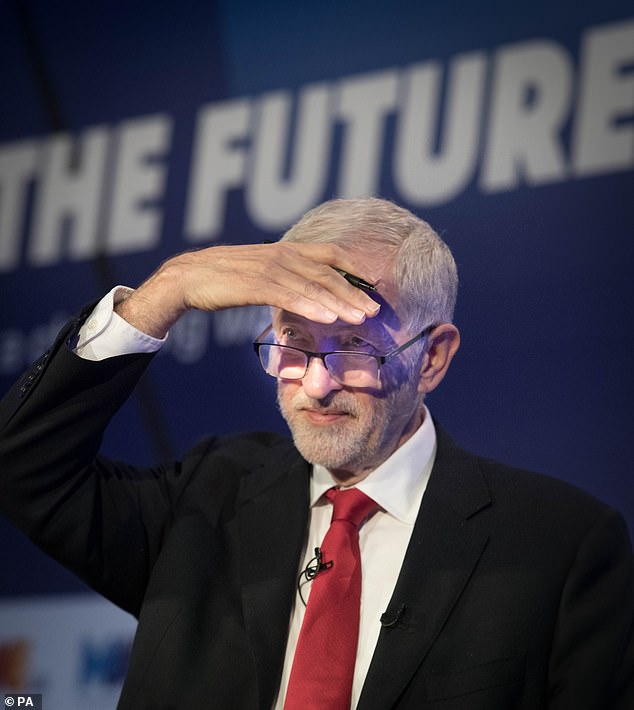 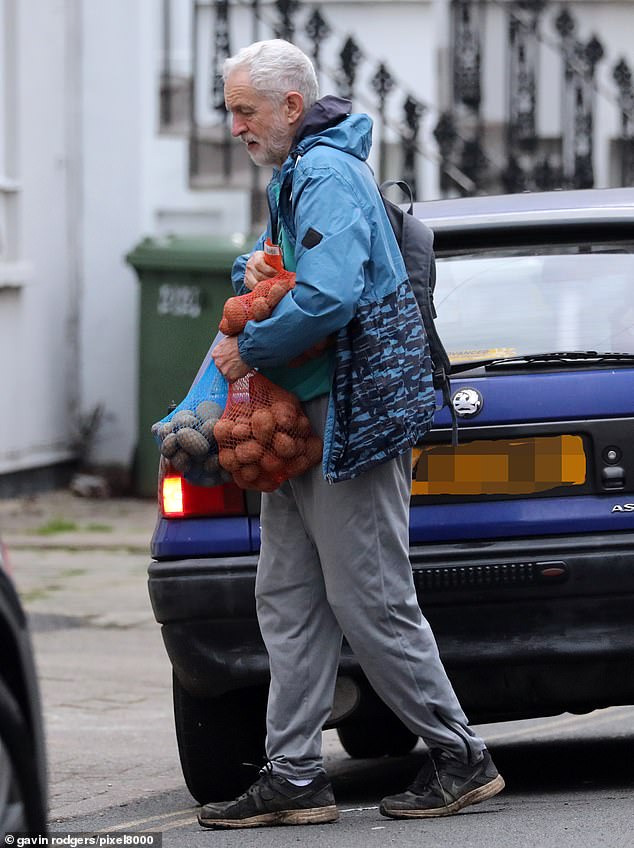 The Labour leader, who was seen yesterday carrying bags of potatoes, made it sound as though the MPs that had left the party had merely decided to switch electricity providers, writes Henry Deedes

What an extraordinary response. Several of his MPs had declared that the party of Nye Bevan and Harold Wilson was now overrun with racists and bigots. And yet Mr Corbyn made it sound as if they had merely decided to switch electricity provider mid-contract. He could not have appeared more disconnected had he been draped in a toga.

But he had not come to discuss Labour’s internal wobbles. He wanted to talk about the party’s manufacturing plans. His message: ‘Something has gone badly wrong.’ The blame, naturellement, ‘lies squarely with this government.’

Sitting alongside him on stage, Angela Rayner (Ashton-Under-Lyne) and Gordon Marsden (Blackpool South) nodded approvingly. Why they’d been brought along wasn’t clear. Protection perhaps? I certainly wouldn’t wish to spill Angela’s drink in a crowded saloon. 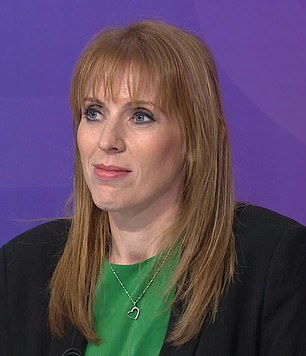 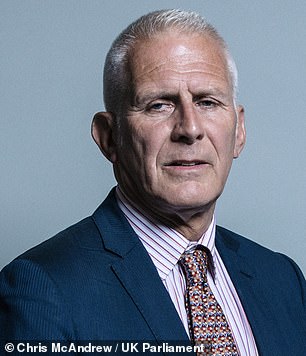 Top of Labour’s proposals was a ‘Commission for Lifelong Learning’ which sounded a bit like a scary correctional facility from a dystopian sci-fi flick. In fact, it’s a plan for workers to be able to update their professional skills between jobs. Mr Corbyn was certainly giving this idea the hard-sell. It would ‘transform the lives of millions’, ‘break down barriers’ and ‘close the gap’ etc. etc. It was ridiculous, he said, that people spend the first quarter of their life in education but then don’t learn anything else their whole life. Quite right. Though this seemed a little rich coming from someone who, according to a new biography, claims he never reads books.

He said Labour would kick-start a green jobs revolution. He reeled off a Soviet-style list of numbers, claiming his plans would create ‘400,000 jobs’, ‘a seven-fold increase in offshore wind capacity’ and ‘a tripling in energy from solar power.’ Yada, yada… Apologies, I should have been jotting more of this down. But after a while, it just felt like being whacked with an abacus. 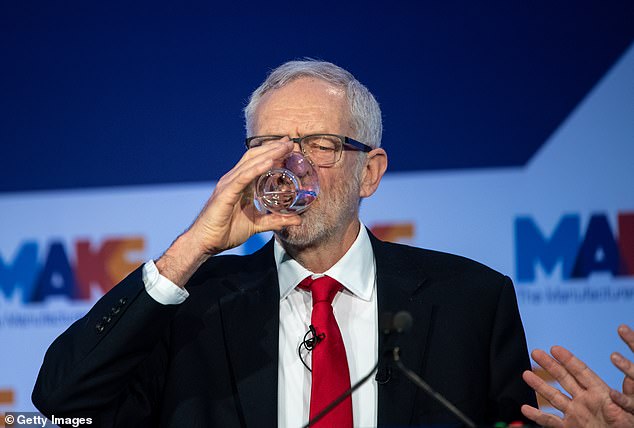 During his speech, Corbyn promised that Labour would kick-start a green jobs revolution

Before departing, he thanked the event’s chief executive, Stephen Phipson, a stout figure with a rugger prop’s ears, for the gift of a toolbox during a previous visit to the conference. ‘It’s in my office,’ enthused Jezza. ‘It’s been used for plenty of repairs.’

Judging by his insouciance towards the Gang of Seven’s treachery, it’ll take Mr Corbyn more than a spanner and drill-bit to fix the Labour Party. Earlier, Business Secretary Greg Clark (Tunbridge Wells) gave us a display of his permanently grinning face. Just a brief visit, he assured the audience. He was due to make an urgent statement in the Commons on the closure of Honda’s plant in Swindon.

Say what you like about Mr Clark, he remains the politest member of a pretty ghoulish Cabinet. Almost maddeningly so. Like the eternally chirpy Simpsons character Ned ‘Okily Dokily’ Flanders, nothing seems to get him down. He reminds me of one those punchballs on a spring which however hard you wallop – booiiiiinng! – back it pops again. 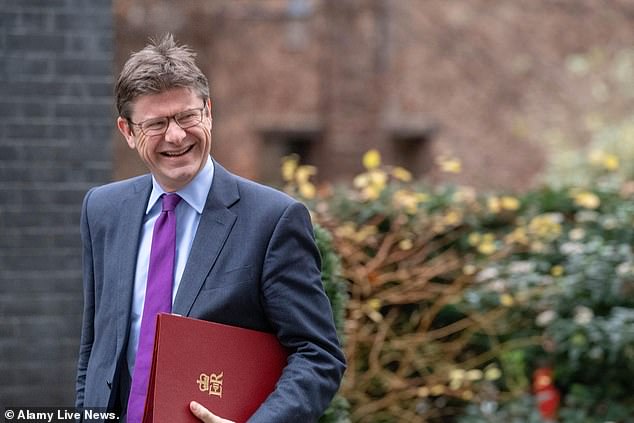 Secretary for Business, Greg Clark, also attended the conference. He is due to make an urgent statement on Honda’s plan to close its Swindon plant tomorrow

Britain has ‘such world class manufacturing talent,’ he kept saying, that he was ‘blown away…There are so many opportunities…’ An audience member unchivalrously tried to burst Mr Boing’s balloon, asking: ‘So why don’t you ask Sir James Dyson to build his electric car in Swindon?’

‘Ho-ho!’ laughed Greg heartily, before responding with a meaningless non sequitur about Swindon having a ‘fantastic manufacturing history with a wonderful workforce.’ And with that, off he dashed back to the Commons for another drubbing.

Child passes out on Pakistan Worldwide Airways flight from Paris
Pink Cadillacs line Detroit streets for Aretha Franklin's funeral
Gemma Collins 'throws foul-mouthed tantrum'
New Roman graffiti found in project to record ancient quarry carvings
Man in his 20s is killed and three others are injured in stabbing in East London
Heavy snow blankets parts of the UK with temperatures set to plunge to 17F overnight
China's disappeared: What happened to those who dared to speak up about coronavirus?
China flexes its military muscle: Beijing exploits Covid crisis to assert control of South China Sea