At last! More than three years after became Labour leader, seven of his MPs have finally done the decent thing, faced reality and walked away from what has become a grotesque perversion of a once-great party.

For the seven rebels, it must have been an agonising decision. More than any other British political party, Labour sees itself as a kind of secular church.

To turn your back on it is the ultimate sin, far worse than joining a rival faith. Heretics are eternally damned. 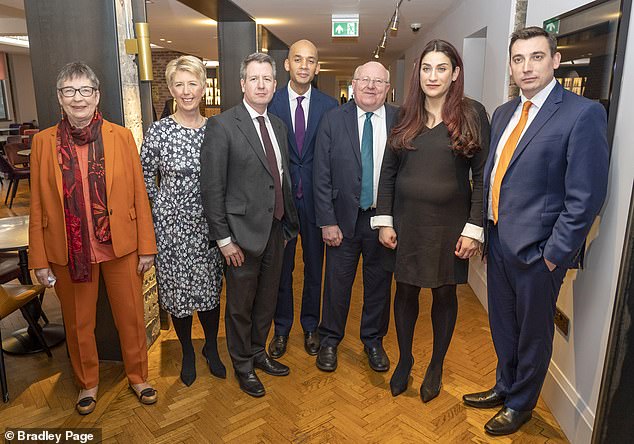 Seven of Jeremy Corbyn’s MPs, including Luciana Berger (second from right), Chuka Umunna (centre) and Chris Leslie (centre left) have finally done the decent thing and walked away from what has become a grotesque perversion of a once-great party

Activists still mutter darkly about the supposed treachery of the former Labour Prime Minister Ramsay MacDonald, who split the party to form the National Government in 1931, even though he is long dead.

So for Luciana Berger, Chuka Umunna, Chris Leslie and their colleagues to walk away took considerable courage. Theirs are one-way tickets; they can never go back.

As they undoubtedly know, they will lose friends and opportunities they would have kept if they had stayed quiet. But they could not do so.

In that dramatic press conference yesterday, they made it clear that they could not remain in a party led by a Marxist, terrorist-sympathiser and apologist for anti-Semitism like Jeremy Corbyn.

The speech by Ms Berger, heavily pregnant, was particularly impressive. As a conspicuously earnest, articulate MP for Liverpool Wavertree since 2010, she has come in for disgusting anti-Semitic abuse from Mr Corbyn’s activists.

Only a week ago they reluctantly abandoned a bid to de-select her as an MP, but it was clearly just a matter of time. Against that background, it is absurd for Labour partisans to insist she should have stayed and fought. 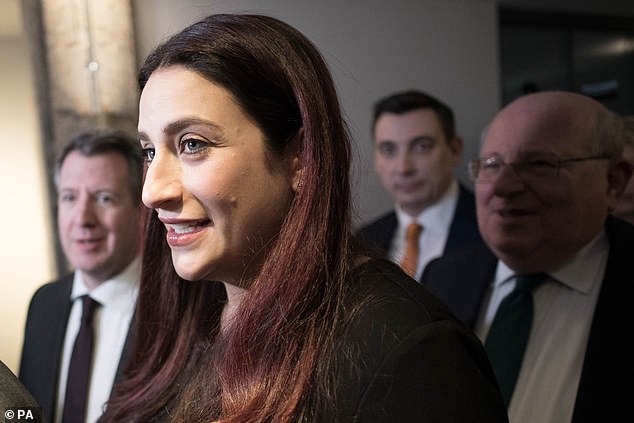 The speech by Luciana Berger, heavily pregnant, was particularly impressive. As a conspicuously earnest, articulate MP for Liverpool Wavertree since 2010, she has come in for disgusting anti-Semitic abuse from Mr Corbyn’s activists

She did stay and fight, for three years, while Mr Corbyn’s far-Left fans bombarded her with rape and death threats, anti-Semitic caricatures and references to the Holocaust.

Who can blame her for saying enough is enough? Who can blame a mother of a small child, with another on the way, for drawing the conclusion the Labour Party is no longer a fit place for a Jewish woman?

The real question is why so few Labour MPs joined her. In June 2016, no fewer than 172 of them opposed Mr Corbyn in a no-confidence ballot. Where were they yesterday?

Are the rest really so blinded by ancestral tribalism that they cannot see the truth?

Are they really so blinkered that they genuinely think a political party should be like a football team, that you support from childhood and never abandon, come what may?

The seven rebels are hardly careerists, as their critics claim. They are now much further from office and power than two days ago. Nor are they faint-hearts. But after three years resistance, they bowed to the inevitable.

The basic reality, as one of the group, MP Mike Gapes remarked yesterday, is that the Labour Party has fundamentally changed. A party stalwart for 50 years, Mr Gapes now recognises that it has become a ‘racist, anti-Semitic party’, threatening ‘the prosperity and security of this country’. 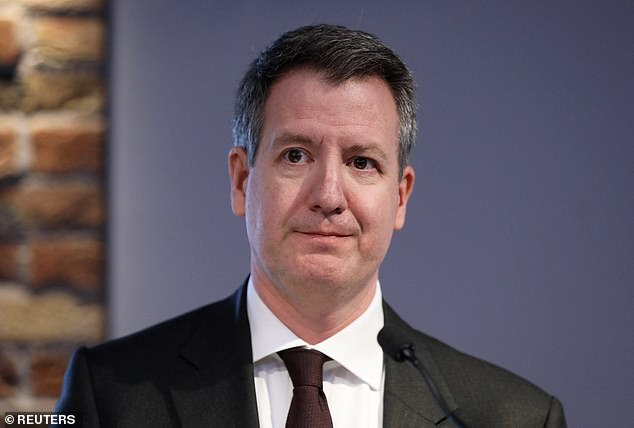 For Luciana Berger, Chuka Umunna, Chris Leslie (pictured) and their colleagues to walk away took considerable courage. Theirs are one-way tickets; they can never go back

There are, inevitably, strong echoes of the secession of the Social Democrats in 1981, when the so-called Gang of Four — Roy Jenkins, Shirley Williams, David Owen and Bill Rodgers — walked out of Michael Foot’s Labour Party.

The irony is that Michael Foot was ten times the man Jeremy Corbyn is. Foot had served in government; Corbyn never has. Foot was a clever, erudite and principled man: Corbyn is E-grade material and a proven liar.

Above all, Foot, despite his Left-wing politics, was a patriot who had argued against appeasement in the 1930s and who backed Britain during the Falklands War.

But Mr Corbyn, who has hardly wavered in his support for Vladimir Putin, the IRA and Palestinian terrorism, has never seen an enemy of the West for whom he would not make excuses. Of course Mr Corbyn’s fans are keen on the SDP analogy, because they claim it proves that splitting the Labour Party only benefits the Tories. They claim that by walking out in 1981, the SDP handed power to Margaret Thatcher for a generation.

This is simply not true. Electoral data shows that if the split had never happened, most who voted for the SDP would almost certainly have voted Tory instead.

Far from helping Mrs Thatcher, therefore, the SDP actually hindered her. Where the SDP parallel is ominous for The Independent Group — the new political organisation that the seven MPs have set up — is in the fact that so many of the rebels lost their seats in the 1983 General Election.

If the likes of Ms Berger and Mr Umunna want to stay in politics, they will have to work night and day from this moment on to woo their local constituencies. And even then it may not be enough.

But in any case, so what? Aren’t politicians meant to stand for what they believe in? As one of the first SDP MPs later said: ‘I was tired of living a lie. I couldn’t go on week after week defending the indefensible.’

The same applies today. Are Ms Berger and her colleagues supposed to ditch every last principle in the name of an infantile, unthinking loyalty? If you join the Labour Party, are you never allowed to leave?

The truth is that this has been coming ever since Mr Corbyn snatched the Labour leadership in September 2015.

As I have written before, he is utterly at odds with his party’s history and traditions.

Labour’s greatest figures, men such as Clement Attlee, Ernest Bevin, Harold Wilson and Jim Callaghan, were decent, sane, patriotic men, who hated Marxism, were committed to our national security and shared the values of millions of ordinary working-class men and women. 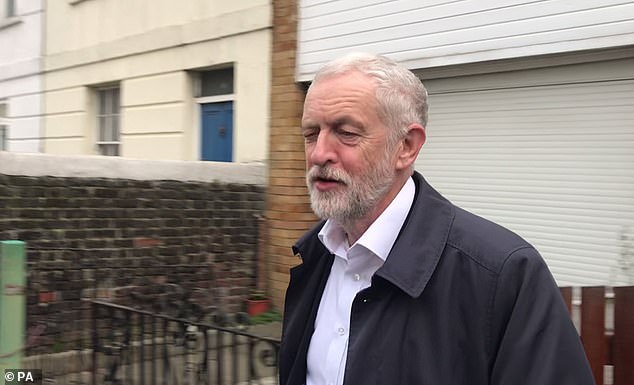 Since Mr Corbyn has so flagrantly betrayed their legacy, it is no wonder that decent Labour men and women believe it is time to go. I dearly hope more join them.

Labour has been rotten for years. With the economic and demographic decline of working-class Britain, it has lost its cultural heart and moral compass, falling into the hands of far-Left activists like Mr Corbyn and his crazed cultists.

And while the Labour Party under Ed Miliband was an intellectual vacuum, it has become something much worse since 2015. It has now become a toxic vehicle for institutional anti-Semitism, conspiracy theories, bullying, intimidation — and the re-invigorated hard Left.

Indeed, I believe the Corbyn project is the single greatest threat in living memory not just to our economic prosperity and national security, but to our culture of tolerance and democratic debate.

And given that premise, why wouldn’t you walk away? Why would you hesitate?

One last point. It was telling that unlike the Gang of Four in 1981, yesterday’s Gang of Seven made no grandiose promises about forming a government and ‘breaking the mould’ of British politics.

As these men and women surely know, history suggests their political journeys will face huge obstacles. 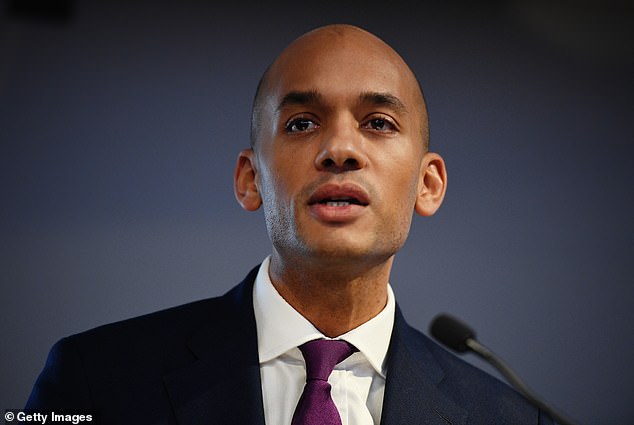 But it is to their eternal credit that, faced with the most toxic and extreme leadership of any major party in living memory, they had the guts to stand up for what they believe in.

Even if it all goes wrong, at least they can look themselves in the mirror, knowing they had the courage to fight for their principles. How many of their former Labour colleagues, skulking at the feet of a man they know would destroy our country, can say the same?

So yes, the Gang of Seven may go down eventually. But in reminding the country of the danger of a Corbyn government, they have done British politics a tremendous service.

And, my God, surely it’s better to die on your feet than to live on your knees.

Pfizer bets on biotech flu vaccine in $425 mln BioNTech...
Twitter boss Jack Dorsey to be grilled by US Home...
Jeffrey Epstein had a painting of Bill Clinton wearing a blue DRESS and red heels in his home
Amir Khan finally heals three-year rift with his parents after they branded his wife 'evil'
Queen is joined by Prince Charles and Princess Anne as she attends a Sunday service in Balmoral
Father has a psychotic episode 'triggered by the EU referendum'
Councils organising 'pauper funerals' are billing families for their loved ones' ashes
Hundreds of furious customers slam Virgin Media and Sky as broadband goes down across the country