Graffiti-daubing vandals have targeted the memorial of Karl Marx in as many weeks.

‘Doctrine of Hate’ and ‘Architect of Genocide’ were sprayed in red letters on the grave of the German philosopher – the most famous resident of Highgate Cemetery in north .

Only two weeks ago a hammer attack was launched on the monument, leading to fears from the charity which runs the cemetery the tribute to the Father of Communism ‘will never be the same again’. 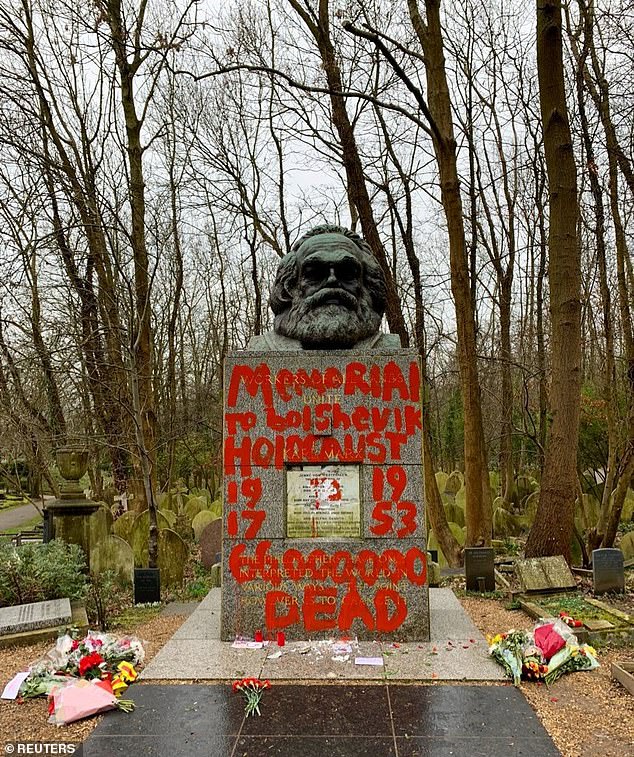 Under attack: Red graffiti is sprayed on Karl Marx’s memorial in Highgate Cemetery in north London

Then the marble plaque had been chipped by a blunt instrument in what looked like ‘a deliberate attack on the memory of Karl Marx himself,’ according to the Friends of Highgate Cemetery Trust.

Maxwell Blowfield said he was ‘quite shocked’ to see the vandalism when he visited the cemetery on Saturday morning with his mother.

Mr Blowfield, 31, who works as a press officer with the British Museum, said it was particularly sad as tourists regularly visit the site.

‘It’s a highlight of the cemetery,’ he said. 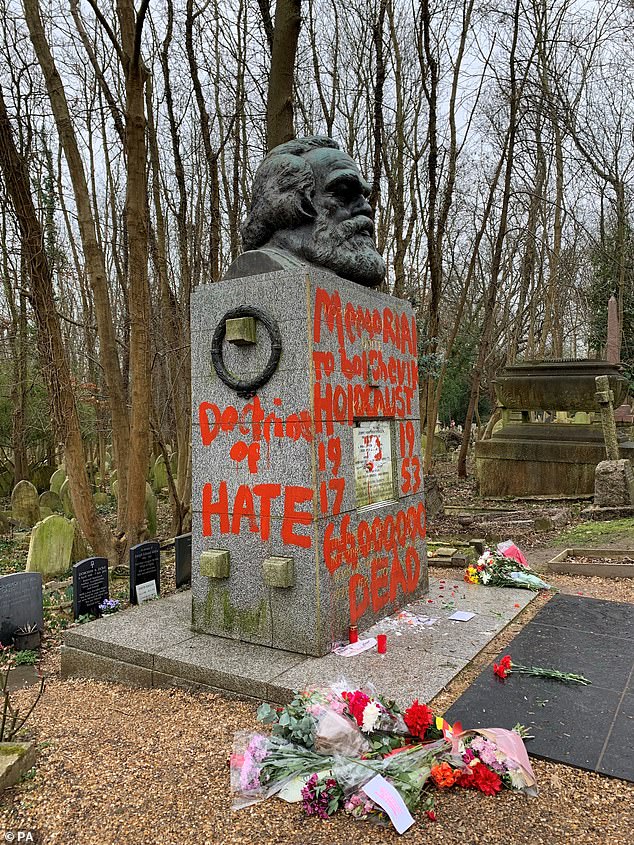 Father of Communism: ‘Doctrine of Hate’ and ‘Architect of Genocide’ were sprayed on the iconic memorial weeks after the hammer attack 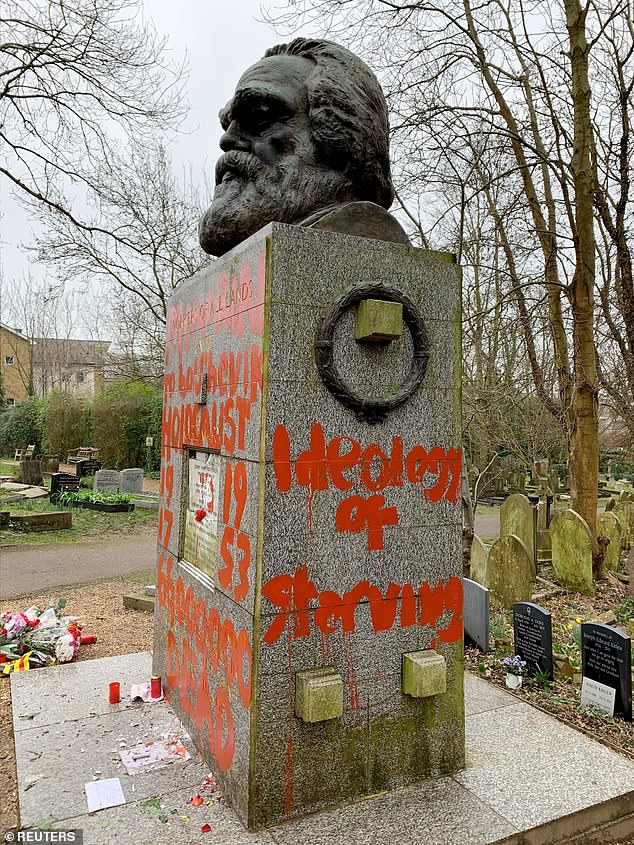 Marx’s memorial: The site is a ‘highlight of the cemetery’ according to Maxwell Blowfield, a press officer at the British Museum

‘It’s a shame. The red paint will disappear, I assume, but to see that kind of level of damage and to see it happen twice, it’s not good.

‘I wouldn’t like to say who or why someone did it but it was clearly someone very critical of Marx and that part of history. I am just surprised that somebody in 2019 feels they need to and do something like that.’

Following the hammer attack on the memorial on February 4, Ian Dungavell, the trust’s chief executive, said the vandal attack on the Grade I-listed monument, which puts it on a par with the most important buildings in the country, was ‘very upsetting’.

Originally, the plaque was first used on the grave of Marx’s wife, Jenny von Westphalen, in 1881.

But it was moved when the remains of Marx and his wife were exhumed and reinterred in a more prominent place in the cemetery in 1954. 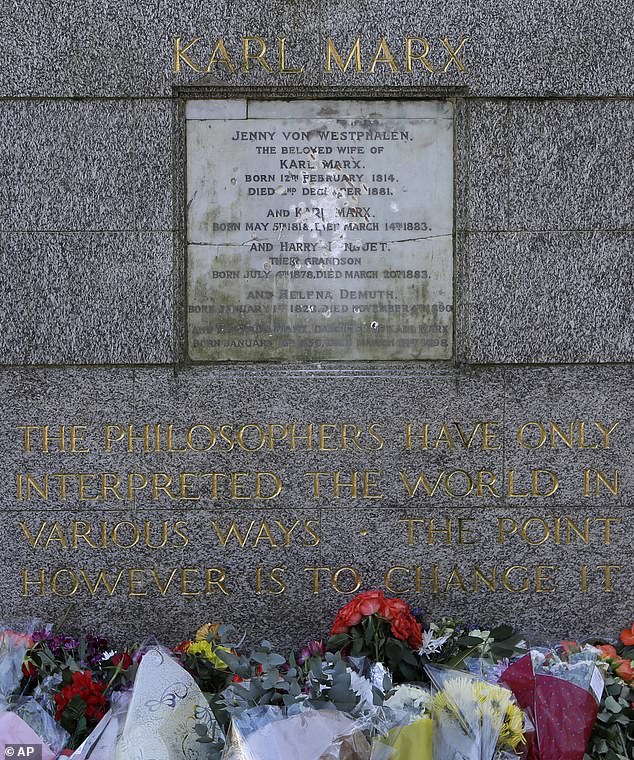 Inscriptions on the grave of the German philospher Karl Marx who died in London on March 14, 1883 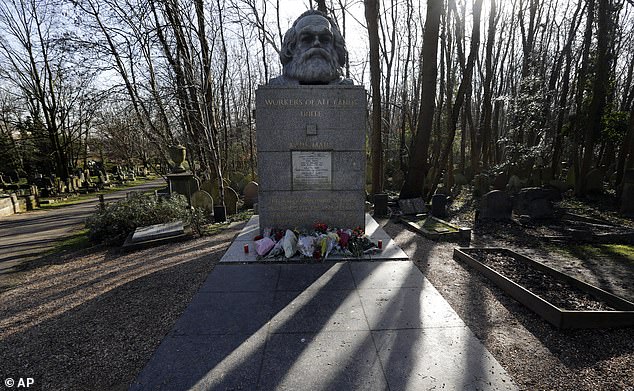 No arrests: The police has confirmed no one has been hauled in following the two attacks on the tribute in Highgate Cemetery

A report of criminal damage was lodged with the Metropolitan Police at around 10.50am on Saturday.

A spokesman said: ‘There have been no arrests. We would appeal to anyone who has any information to contact us.’

He further confirmed no arrests had been made following the February 4 attack.

SARAH VINE on the bump boasting parade
Try these brilliant British hiking holidays
'Virtually indestructible' four-legged cheetah robot can perform 360-degree backflips
Bike riders collide in horror stunt at the Sydney's Royal Easter Show
Explosive-laden drones attack oil pipelines in Saudi Arabia in 'act of terrorism'
Experts call for doctors to be allowed to sign off on abortions over Skype
Forestry chief calls for the culling of rabbits, hares and other animals to protect Britain's trees
\Mom shares hilarious note from her eight-year-old son on her homeschooling skills