has launched a new submarine it built itself which it claims is capable for firing cruise missiles amid heightened tensions with the United States.

The new vessel, named Fateh – Farsi for ‘Conqueror’ – was launched by President Hassan Rouhani in the southern port city of Bandar Abbas.

She show of strength comes as relations between Tehran and Washington are tense following President ‘s decision to pull out of the Paris nuclear accord. 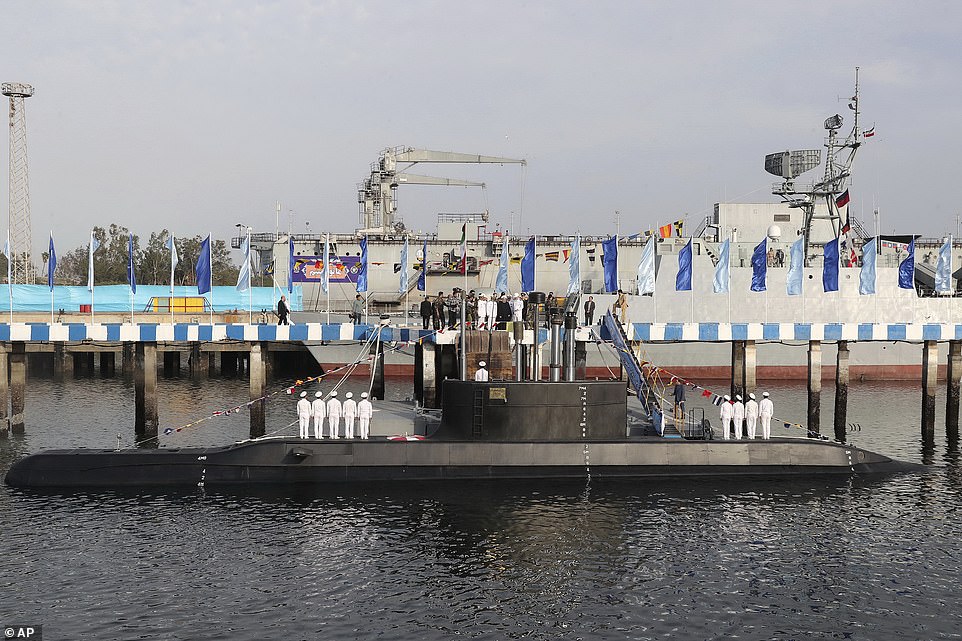 Iran today launched its latest submarine, the 600 tonne Fatah – Farsi for Conqueror – at a ceremony in Bandar Abbas 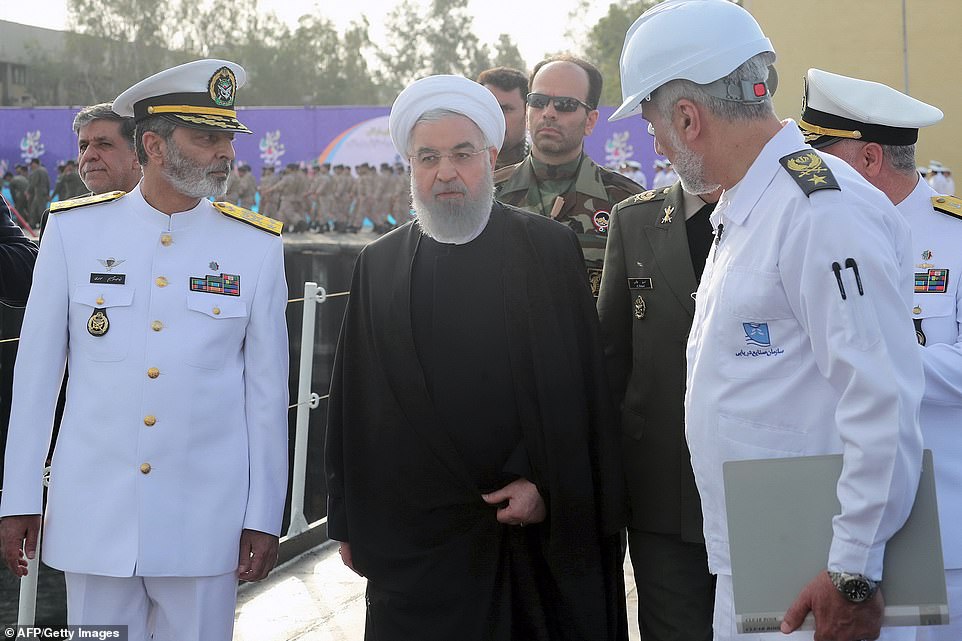 President Hassan Rouhani, centre, launched the vessel which can remain below water for up to 35 days at a depth of 600 feet 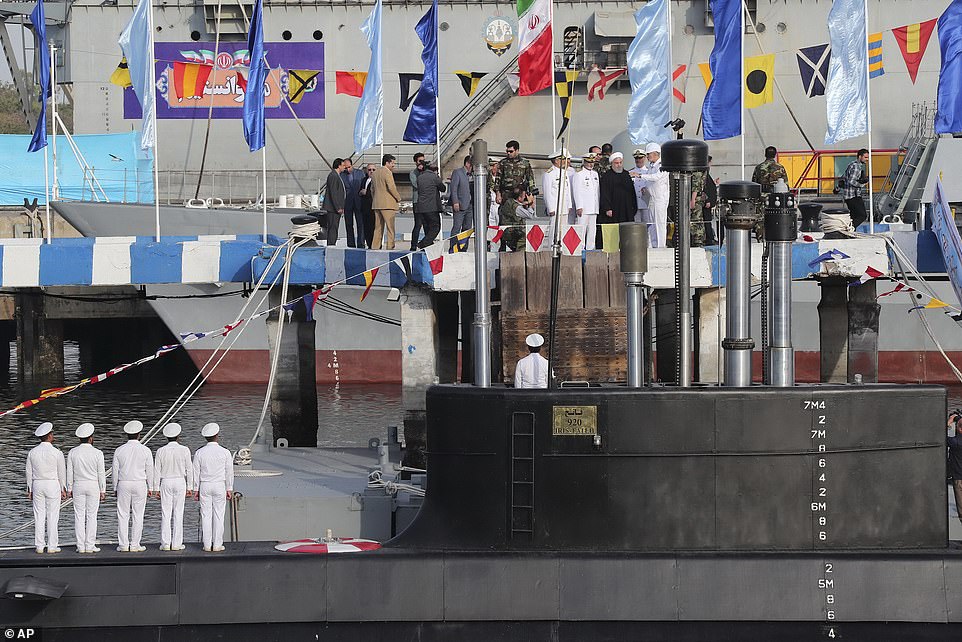 The Fars news agency said the new vessel is equipped with torpedoes, naval mines as well as some cruise missiles

Speaking at the launch, President Rouhani said: ‘Today, the Islamic Republic of Iran is fully self-reliant on land, air and sea. Our defensive power is meant to defend our interests and we have never sought to attack any country.’

According to the Iranian Fars news agency, the new submarine is Iran’s first in the semi-heavy category, filling a gap between the light Ghadir class and the heavy Kilo class submarines that the country possesses.

Fars said the near 600-tonne underwater vessel is equipped with torpedoes and naval mines in addition to cruise missiles, and can operate more than 600-feet below the surface for up to 35 days.

The US withdrew from a 2015 multilateral nuclear deal with Iran in May 2018 and re-imposed biting unilateral sanctions later last year.

Iran’s Revolutionary Guards on February 7 unveiled a new ballistic missile with a range of 620 miles, according to the elite unit’s official media agency Sepah News.

The surface-to-surface missile – called Dezful – is an upgrade on the older Zolfaghar model that had a range of 430 miles, aerospace commander Brigadier General Amirali Hajizadeh said.

Rouhani said on Sunday that ‘pressure by enemies, the (Iran-Iraq) war and sanctions’ were incentives for Tehran to be self-reliant in its defence industry.

‘Maybe we would not have this motivation to industrialise our defence sector,’ he said, if Iran could just buy the weaponry it needed. 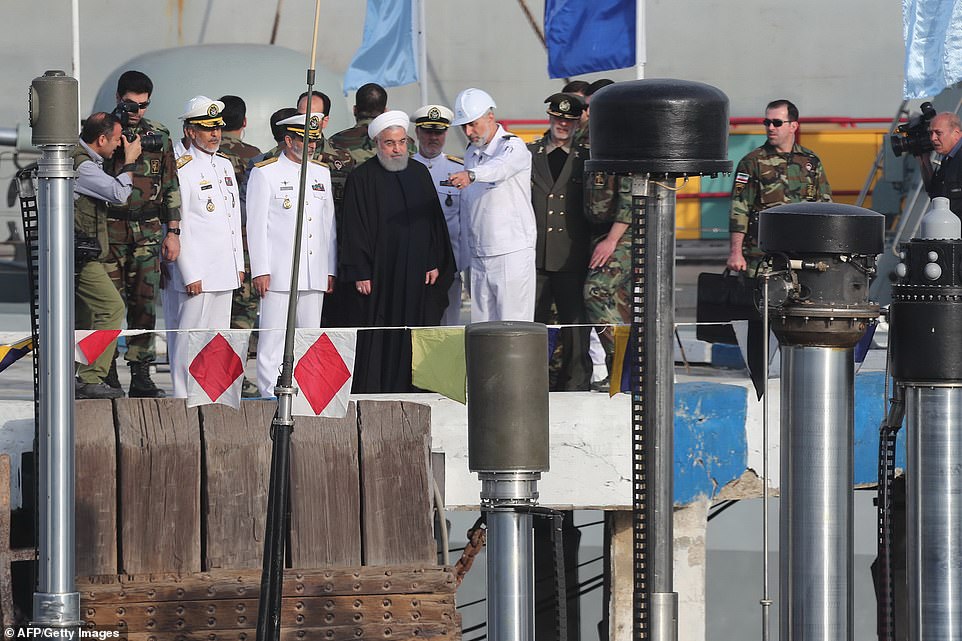 Police: Synagogue gunman said 'I just want to kill Jews'
'I can’t read his mind' Trump says of Putin and says he canceled meeting because of Ukraine
'It's cruel!' GMB viewers rage at mother who's raising her 11-month-old baby only on vegan food
Meghan and Harry living The Good Life at Frogmore Cottage as they install an organic vegetable plot
Council bosses to hand out £200 fines to anyone caught throwing their rubbish in a public bin
England cricket star witnesses man fall under a tube train
Britons on coronavirus airlift from Wuhan WILL be quarantined
Iran's supreme leader releases anti-Israel poster