‘Definitely and imminently,’ Becerra told ABC’s ‘This Week’ program when asked whether and when California would sue the Trump administration in federal court. Other states controlled by Democrats are expected to join the effort.

‘We are prepared, we knew something like this might happen. And with our sister state partners, we are ready to go,’ he said.

Trump invoked the emergency powers on Friday under a 1976 law after Congress rebuffed his request for $5.7 billion to help build the wall that was a signature 2016 campaign promise.

The move is intended to allow him to redirect money to wall construction despite Congress appropriating it for other purposes . 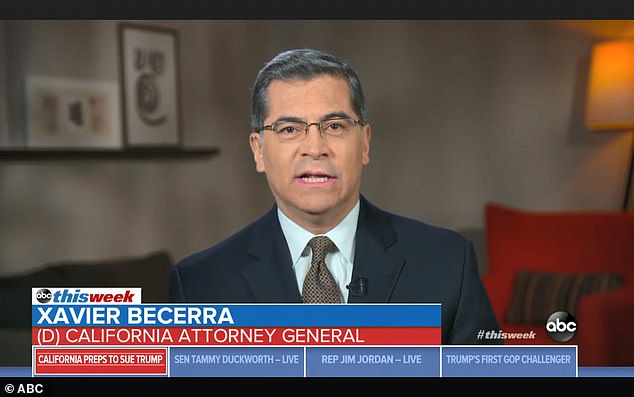 California Attorney General Xavier Becerra said Sunday that his state and four others will ‘imminently’ sue President Donald Trump to stop him from using afederal emergency declaration to expand a wall along the U.S.-Mexico border 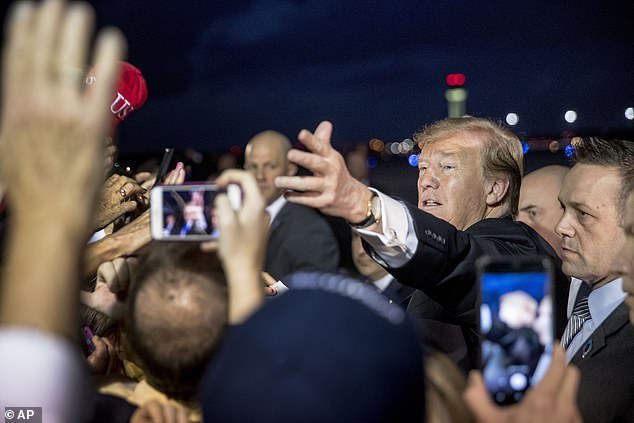 President Trump greeted guests on the tarmac at West Palm Beach International Airport on Friday night, hours after declaring a border ‘national emergency’ and announcing his plan to redirect $6.5 billion in government dollars to the expansion of a U.S.-Mexico border wall

The White House says Trump will have access to about $8 billion. Nearly $1.4 billion was allocated for border fencing under a spending measure approved by Congress last week, and Trump’s emergency declaration is aimed at giving him another $6.7 billion for the wall.

Becerra cited Trump’s own comment on Friday that he ‘didn’t need to do this’ as evidence that the emergency declaration is legally vulnerable.

‘It’s become clear that this is not an emergency, not only because no one believes it is but because Donald Trump himself has said it’s not,’ he said.

Becerra and California Governor Gavin Newsom, both Democrats, have been expected to sue to block Trump’s move. 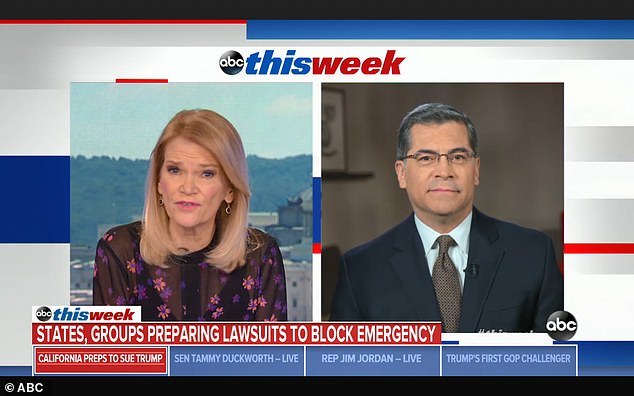 Becerra is leading a group of five Democratic attorneys general who plan to sue in the Ninth Circuit, traditionally America’s most liberal group of courts and judges; the case is ultimately expected to be decided in the U.S. Supreme Court 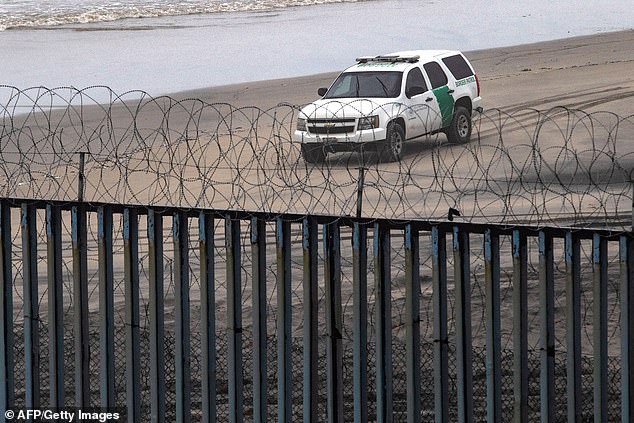 Becerra told ABC that California and other states are waiting to learn which federal programs will lose money to determine what kind of harm the states could face from the declaration.

He said California may be harmed by less federal funding for emergency response services, the military and stopping drug trafficking.

‘We’re confident there are at least 8 billion ways that we can prove harm,’ Becerra said.

Three Texas landowners and an environmental group filed the first lawsuit against Trump’s move on Friday, saying it violates the Constitution and would infringe on their property rights.

The legal challenges could at least slow down Trump’s efforts to build the wall but would likely end up at the conservative-leaning U.S. Supreme Court.

Congress never defined a national emergency in the National Emergencies Act of 1976, which has been invoked dozens of times without a single successful legal challenge.

Democrats in Congress have vowed to challenge Trump’s declaration and several Republican lawmakers have said they are not certain whether they would support the president.

‘I think many of us are concerned about this,’ Republican Senator Ron Johnson of Wisconsin, who chairs the Senate Homeland Security Committee, told NBC’s ‘Meet the Press.’

Trump could, however, veto any resolution of disapproval from Congress.

Trump’s proposed wall and wider immigration policies are likely to be a major campaign issue ahead of the next presidential election in November 2020, where he will seek a second four-year term.