Let’s be honest; you never expect to find anything good down a sewer. But there’s bad, and there’s really, really bad.

In his 15 years tackling blockages for South West Water, Charlie Ewart had never seen anything as horrendous as this.

After scrambling through a manhole cover near the lifeboat station in Sidmouth for a routine maintenance visit just before , he hadn’t expected to find anything out of the ordinary. Then the smell hit him like a bus. And that’s when he saw it — a huge monstrous mass looming out of the darkness.

‘It looked like something out of a horror scene, all congealed and glossy and matted,’ he recalls. ‘I couldn’t believe the size of it.’ 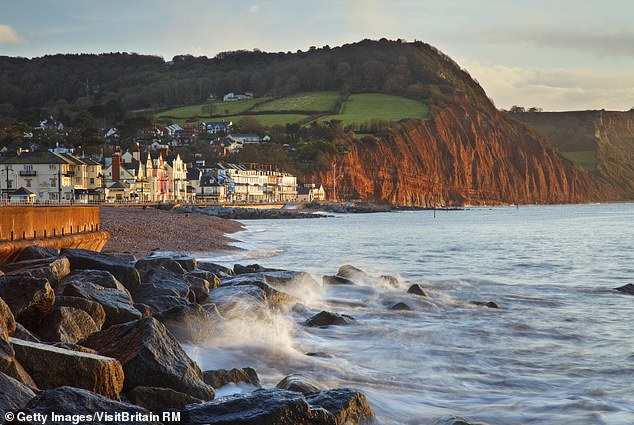 So what had Charlie discovered wedged deep in the pipes under this sleepy Devon seaside town? A giant fatberg. This behemoth, made up of wet wipes that have become tangled up in solidified cooking oil, is 210 ft long by 7 ft wide — the length of six double-decker buses end-to-end. Only in London — which has a population of 8.8 million to Sidmouth’s 15,000 — are fatbergs of this magnitude normally seen.

Could there be a more striking visual representation of the scale of the single-use plastic we thoughtlessly chuck away daily, that often ends up in the ocean — and which the Mail has been campaigning against for more than a decade?

Charlie says: ‘I’d watched YouTube videos of the London fatbergs but I’d never seen one for myself. I never thought I would — not here, in a small seaside town.’

Now Charlie and his team have the unenviable task of dismantling it. Excavators work around the clock chipping away at the monstrosity in a bid to clear the drains before disaster strikes — peeling away layers of wipes and cotton buds.

If they don’t remove it before heavy rains or high tides, the raw sewage flowing through these pipes, below the public toilets and fish shop, will back up and be forced out through the manholes that line the esplanade, sending the fetid soup across the elegant cafe pavements and out to sea.

As you near the esplanade, you detect a distinct whiff of rotten eggs on the salty sea breeze. The site is cordoned off with wire fencing, but locals and tourists gather to watch workmen being winched down a small manhole.

They hack and scrape away at the rock-hard mass armed with shovels, small pickaxes and hand-held rakes. Once loosened, it can be sprayed with jets of water, which break the lumps down into a slurry that is sucked up a pipe and taken away in lorries. South West Water says it could take eight weeks to break up the fatberg, at a cost of more than £100,000.

For the first few days the rancid fumes given off by the fatberg were so strong the team had to wear breathing equipment, but now pumps have been set up to force fresh air into the cavity.

Everyone has a gas-detecting monitor clipped to their chest and carries an emergency air supply in case their excavations dislodge a pocket of toxic fumes.

On one side of the site there’s a yellow bucket containing a chunk of fatberg for the people of Sidmouth to gawp at. I can see a cotton bud sticking out of one side, but it looks like stony mud and, even though I put my nose close and sniff, it seems innocent enough. 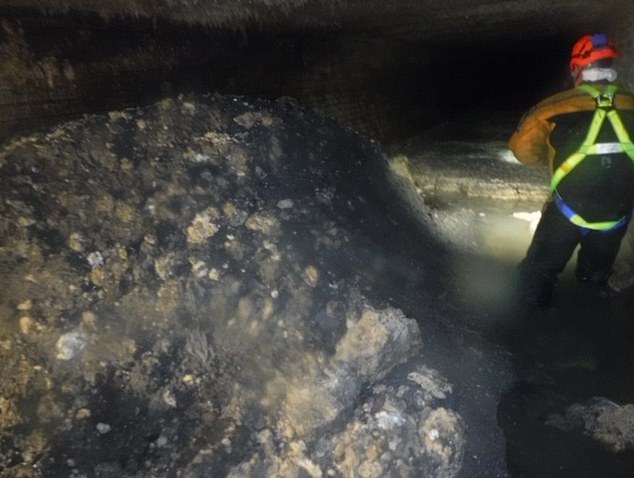 Workers confront the 210 ft fatberg. This behemoth, made up of wet wipes that have become tangled up in solidified cooking oil, is 210 ft long by 7 ft wide

‘That’s been sitting out here for a few days so the rain has washed it,’ explains Charlie. ‘Do you want me to get the boys to bring up a fresh bucket full?’

Minutes later he is standing before me, grinning, the yellow bucket in his hands. He beckons me closer and the smell hits me immediately — it’s so eye-watering it seems to singe the hairs inside my nostrils.

I turn away to retch. As Charlie prods at the greasy mass I see food traces, cotton buds and a mass of knotted, twisted swathes of cloth — obviously wet wipes.

Although fatbergs are formed by the fat which we pour down our sinks, or which drains out of our dishwashers, they are caused by wet wipes.

According to Andrew Roantree, South West Water’s director of wastewater, the sewage system can usually cope with fat. It can even handle the odd nappy thoughtlessly flushed away. But it cannot handle the wet wipe.

More than 670 million packs of wet wipes are sold in Europe a year — everything from cosmetic and baby wipes to moist toilet tissue and household cleaning wipes. And a shocking number, it seems, are being flushed down the loo.

‘We’ve noticed a huge increase in wet wipes in the system in the last three years alone,’ says Andrew.

One explanation could be the rise in popularity of ‘moist toilet tissue’ and bathroom cleaning wipes that end up in the lavatory. Despite the repeated entreaties from water companies to flush only ‘the three Ps’ (Poo, Pee and Paper) many wipes carry ‘flushable’ labels that imply that they’ll rapidly break down and dissolve like toilet paper. 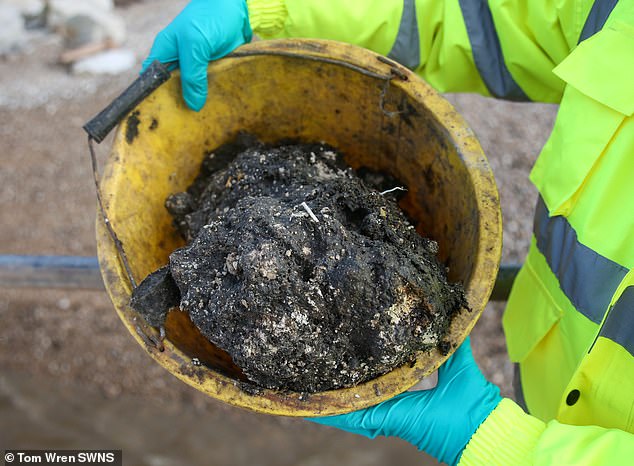 Most wipes are either made from plastic, or natural fibres strengthened and treated with plastic. It makes them almost impossible to break down. Many will still be here in 500 years’ time. If a wipe is too tough to break down naturally by the time it reaches the sewage plant, it could be feeding a fatberg, ultimately poisoning the planet.

Sewage plants are not equipped to ‘treat’ plastic. In many cases plastic solids can be scooped out and sent off to be burned or buried, but tiny particles of plastic can slip through the net, and potentially escape into drinking water, rivers and oceans.

Some wipes make it out of sewers and into the sea. Marine conservationists report a 700 per cent rise in wipes washed up on beaches in the last decade.

And they wreak havoc in the sewage system. ‘Wipes create a matrix that everything else gets caught up in,’ Andrew Roantree explains. His team deals with 8,500 small blockages a year and flushed wet wipes are increasingly to blame.

They catch on bends and snag on brickwork, forming mini blockages which attract the fat. If the flow is allowed to slow — as it was in the cavern under Sidmouth — plastic detritus gets gummed together by clods of fat. Over time, the mass can react with the calcium in sewer water to set like concrete.

No one ever wants to talk about sewage, but the out-of-this-world magnitude and repugnant horror of a fatberg provides a stark reminder of the harmful plastics we forget about the second we flush them away. 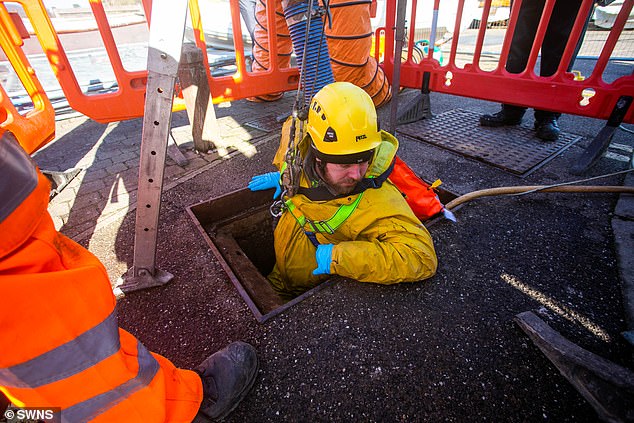 Workers go down to sewers at The Esplanade in Sidmouth, Devon, as work continues to destroy the fatberg

Giant fatbergs require vast quantities of unflushable plastic and space to grow, which is why they have previously only been identified in the London sewage system (such as the mammoth fatberg found under Whitechapel in 2017).

This spot in Sidmouth appears to have provided the perfect environment. It is (or should be) a kind of holding tank for the town’s flush contents, before they reach the nearby pumping station to be propelled the three miles or so to the treatment works. Its size, low level and slow current allowed the fatberg to grow unnoticed.

Andrew and his team believe the Sidmouth fatberg had been expanding silently under the town for around five years — fed by a steady diet of flushed wet wipes. There was no evil stench or unusual blockages to hint at its presence until Charlie’s discovery.

You might think the residents of Sidmouth would be embarrassed about their bathroom habits, and surveying the shelves of wet wipes and ‘moist toilet tissue’ at the local Tesco, it’s easy to wonder whether this community might be less flush-savvy than most.

But there are colourful ‘Stop the block!’ banners along the seafront and fun posters urging residents to ‘think sink’ (don’t pour fats down the sink — allow them to cool then tip them into your food waste) and ‘love your loo’.

It’s clearly a great opportunity to get an important message out. There is an upbeat atmosphere around the site and palpable local support for ‘project fatberg’.

Everyone wants to peer into the sewer (very much forbidden), with visitors from all over the country coming down to gawk at this unlikely tourist attraction. I watch as dog walkers edge closer for a sniff at Charlie’s yellow bucket, before pulling back, repulsed.

South West Water have called in scientists from Exeter University to analyse their prize find. John Love, a professor of synthetic biology, is heading up the project.

His team has started analysing the fat composition, bacteria levels and the chemicals the fatberg might be holding (one London specimen carried startling amounts of paracetamol and even traces of performance-enhancing drugs).

‘We are very interested in the plastics,’ he says, ‘not just wet wipes, but the water-absorbing compounds which spill out of nappies, as well as micro plastics which might have leached out of beauty products.’ Their first findings are expected in the next few weeks.

As I’m chatting to Andrew about the perils of non-flushable plastics, a woman approaches and pokes a bag of cakes through the perimeter fence. ‘You’re doing such a great job so I’ve done a bit of baking for you lads,’ she says.

Andrew tells me someone else left them a consignment of pasties last week.

‘Sidmouth is no different to any other town,’ he explains. ‘Wherever people flush wet wipes there will be blockages — and unless people stop flushing wipes, there’s every chance fatbergs will be growing across the country right now.’

Wilfried Zaha a target? It's nothing new... Crystal Palace star must keep his cool
Russian space agency spokesman slams 'information attack'
France plans for no deal Brexit with customs and border recruitment
More than 2,000 viewers complain to Ofcom after Channel 4 News presenter Jon Snow coverage
Shocking video of officer using his baton to repeatedly hit teen, 17, is being probed by Met
Using your mobile while you shop causes you to spend 41% MORE than you would without your device
Raheem Sterling and Joe Gomez in BUST-UP again during England training
Grenadier Guard wears medal to court as he faces trial with fellow squaddie for armed robberies