Thousands of British youngsters are expected to go on strike from school today as part of a global youth action over .

Youth Strike 4 Climate organisers say strikes are taking place in 60 towns and cities across the country from Cornwall to the Scottish Highlands, in the face of ‘an alarming lack of Government leadership’ on climate change.

But school leaders and Education Secretary Damian Hinds have warned students they should not miss lessons to take part in the strikes.

The movement has been inspired by Greta Thunberg (pictured in Davos on January 25), who protests every Friday outside Sweden’s parliament to urge leaders to tackle climate change

The movement has already seen school strikes in Australia and European countries including Belgium, and has been inspired by teenager Greta Thunberg, who protests every Friday outside Sweden’s parliament to urge leaders to tackle climate change.

The strikes come in the wake of a UN report which warned that limiting global temperature rises to 1.5C above pre-industrial levels, beyond which climate impacts become increasingly severe, requires unprecedented action.

That includes cutting global carbon dioxide emissions by almost half within 12 years.

Students in the UK are demanding the Government declare a climate emergency and take active steps to tackle the problem, communicate the severity of the ecological crisis to the public and reform the curriculum to make it an educational priority. 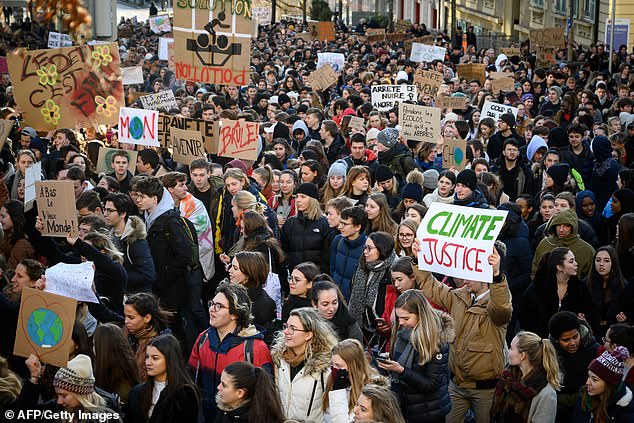 Students protest against climate change at a strike in Lausanne, Switzerland, on January 18

They also want recognition that young people have the biggest stake in the future, should be involved in policymaking, and that the voting age should be lowered to 16.

Where are the Youth Strike 4 Climate protests taking place?

Anna Taylor, of UK Student Climate Network, said: ‘We’re running out of time for meaningful change, and that’s why we’re seeing young people around the world rising up to hold their governments to account on their dismal climate records.

‘Unless we take positive action, the future’s looking bleak for those of us that have grown up in an era defined by climate change.’

The National Association of Head Teachers (NAHT) said it supports the right of young people to express themselves but it did not condone students being out of the classroom to take action.

In a statement, the NAHT said: ‘While a school leader’s role is to ensure children attend school, are kept safe and receive a good quality of education, it is right that individual school leaders can decide how best to respond to any proposed protest by students in their school on Friday.’

Mr Hinds said: ‘I want young people to be engaged in key issues affecting them and involving themselves in causes they care about.

‘But let me be clear, missing class won’t do a thing to help the environment; all they will do is create extra work for teachers.’

He added it was ultimately a matter for headteachers, but he did not want teachers being burdened with the extra-workload the strikes could create.

London mayor Sadiq Khan, speaking at the National Clean Air Summit at the Tate Modern on Thursday, said he understands why children feel ‘very strongly’ about pollution and climate change and called for politicians to take ‘great strides to clear up the air across our country’.

He said: ‘I say to my fellow politicians, we can be the first generation to get it and find solutions, or the last generation not to get it.’

The strike is being supported by environmental campaign groups and Green Party MP Caroline Lucas, who will address students on their walkout in Brighton.

Ms Lucas, who described the action as ‘inspiring’, said: ‘Our children recognise that this is a climate emergency.

‘They are striking this week because they know we cannot carry on as normal.

‘Teachers work hard to prepare students for their future but right now that future is at serious risk.’

Liberal Democrat education spokeswoman and former teacher Layla Moran also backed the young people who have ‘taken up such an important and principled cause’ and said she would be joining students in Oxford.

Students and young people are set to follow up on February’s action with a second round of strikes taking place on March 15 as part of a global youth strike.

JANET STREET-PORTER: I applaud young people making the effort to protest but why can’t they do it on their own time?

By JANET STREET-PORTER FOR MAILONLINE

A strike is a weapon of last resort.

Workers who withdraw their labour know they will be out of pocket, and their actions can thoroughly inconvenience people who have nothing to do with any dispute.

Strikes cause resentment and anger, but there’s always the hope that taking such a drastic step will rally support for poor working conditions, unfair pay and unfair dismissals and bring about change for the better. 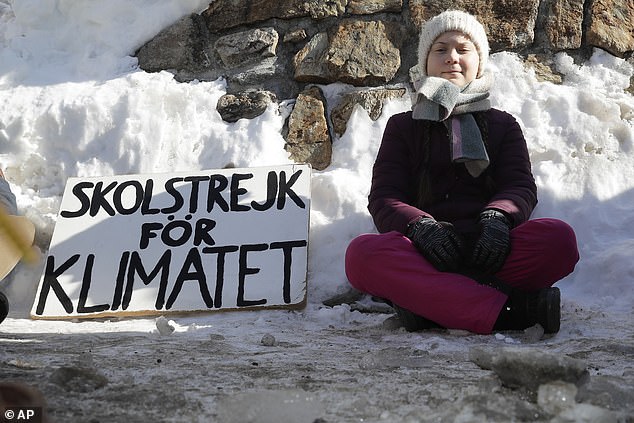 Now, a series of so-called Youth Strikes by school students in Australia, all over Europe and in the UK this Friday signal that young people are thinking and behaving like adult workers on a wage.

The kids say their strikes are justified because our elected leaders are failing to deal with the devastating effects of climate change, and supporters claim that teenagers are the ‘true grown ups’ while adults are behaving ‘like spoiled and dangerous children’.

The Strike 4 Climate Action campaign was started by a remarkable young Swedish woman, Greta Thunberg, who has Aspergers.

Since August 2018, she has refused to attend school on Fridays, staging a weekly protest outside the Swedish Parliament building. In January, Greta was invited to speak at the World Economic Forum in Davos.

Patronising journalists wondered if she had ‘help’ with her speech because it was so articulate, and asked who was ‘behind’ her one woman campaign.

The young woman replied: ‘I am behind Greta. I have brainwashed my parents. I convinced them not to fly any more and to stop eating meat’.

Now, Greta’s campaign has gone global and one of her fans, 13 year-old Alexandria Villasenor from New York, is planning a day of direct action across the US on March 15th.

Using the hashtag FridaysForFuture, thousands of teenagers around the world have been walking out of school and staging marches in city centres.

They’ve protested in Brussels and Berlin, Switzerland and Sweden. In Australia last November, thousands marched in Sydney, Melbourne and 20 major cities. Reaction from politicians was pitiful, to say the least.

Prime Minister Scott Morrison urged them to be ‘less activist’, and one minister moaned that kids should be in the classroom ‘learning about mining and science – because that’s what we’re good at…..all you learn from a protest is how to join a dole queue’.

They’re both terribly wrong. I joined the Tories and then the Young Socialists in my teens, and went on protest marches again apartheid, nuclear weapons and the war in Vietnam.

I shouted abuse at police, waved my placards and chanted for world peace. I don’t know what difference my voice made, but it was something I could not ignore. 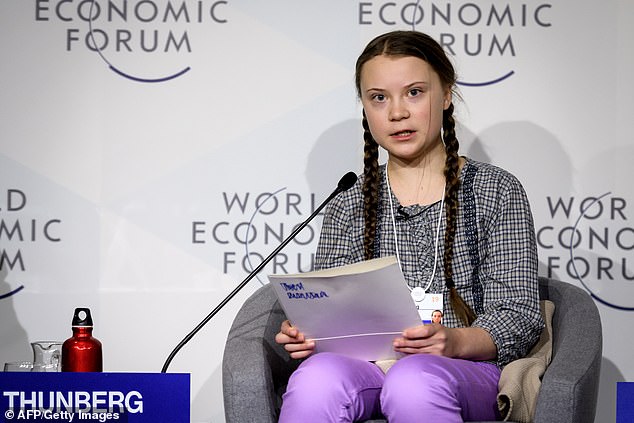 Last month, Greta was invited to speak in Davos, and told journalists: ‘I am behind Greta. I have brainwashed my parents. I convinced them not to fly any more and to stop eating meat’

Protest marches are the only way that ordinary people can make their voices heard, when most politicians have been privately educated, attended a small group of elite universities, studied the same subjects, worked in law or economics, and all belong to the same clubs.

Learning how to protest teaches you resourcefulness, wit and determination.

But should we be impressed by the actions of teenagers taking to the streets instead of sitting in classrooms learning stuff that might secure them a better job and a chance to be in power themselves one day?

It’s easy to be cynical and see the appeal of bunking off school once a week.

Given the perfect excuse for a Friday loafing around a town centre or hanging out in a park, what teenager would refuse to join a protest movement? Particularly one that so many adults agree with.

In Australia, climate change is top of the agenda after months of extreme weather. During my visit last month there was flash flooding, serious bushfires, extreme heat and torrential rain. There is a huge reliance on coal and a reluctance to harness solar and wind power.

A country with a giant desert in the middle is determined to dig up every last seam of coal, come what may, in order to placate the powerful mining interests and the unions. Natural wonders, like the Great Barrier Reef, are devastated and dying.

There’s no dispute that adults have failed to deal with climate change, pandering to vested interests and big business every time. 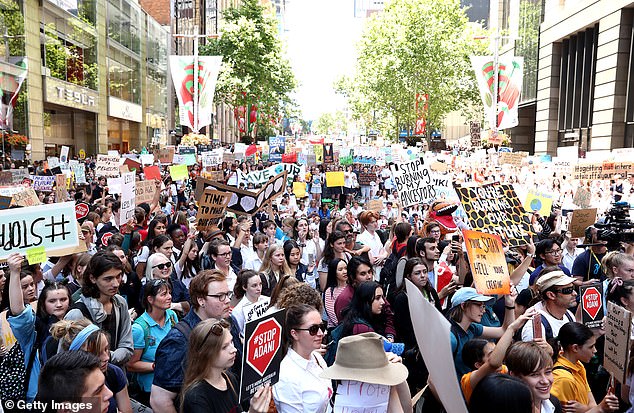 But the way to bring about change is by infiltrating democracy from within, by becoming a powerful voice, a politician and a leader.

Some teacher’s unions have said that the strikes will do pupils good and teach them a valuable experience. Others have complained that the disruption should not interrupt their education.

Information and knowledge are what give you power- so maybe schools should harness all this enthusiasm for saving the planet and devise imaginative projects and initiatives which inform as well as educate their pupils.

Responding with the threat of detentions will achieve nothing either.

One middle class female commentator says she applauds the young strikers because they are ‘talking more sense than our MPs’. That might be the case, but working class parents will have a different view. Poverty forced both my parents to end their education at 14.

They scrimped and saved for my school uniform and were so proud that I attended grammar school – they would have been outraged if I had walked out of a single lesson.

To them, passing exams and academic achievement was my only way out of dead end jobs and low wages.

They never complained about me attending marches as long as my political escapades happened in my free time, on the weekend.

I’m thrilled the younger generation are so idealistic and committed to a better future for us all (just like I was).

I’d just be more impressed if they gave up their Saturday morning lie-ins to fight for their cause.