Just a few weeks ago I stood in ‘Hell Square’ in the centre of Raqqa, the former capital of Islamic State in Syria, listening to harrowing tales of death and devastation amid razed buildings.

It was cold and I took refuge in a juice bar to talk to young men who told me of the horrors they witnessed under the rule of IS – and which earned this place its name.

Mass executions and numerous beheadings, with the heads of Syrian fighters impaled on a makeshift fence. 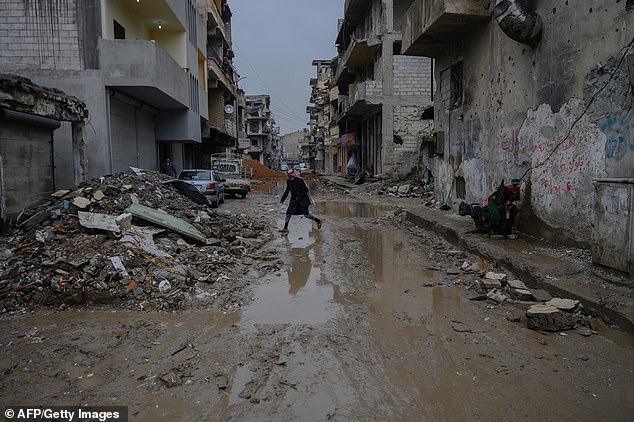 An elderly man crosses a mud-covered street near the Al-Naim square, in the northern Syrian city of Raqqa on February 14. Larisa Brown stood in the former capital of Islamic State in Syria , listening to harrowing tales of death and devastation amid razed buildings 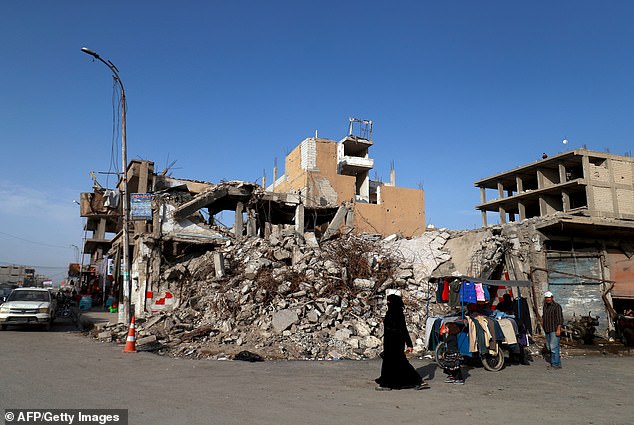 A woman walks past a street vendor and a destroyed building in the Syrian city of Raqqa. Mass executions and numerous beheadings took place in the city

I was reminded of a speech Theresa May made in January 2017 in Philadelphia – nine months before Raqqa fell – when she tried to rewrite the British doctrine that defined the Blair years.

The days of ‘failed’ liberal intervention in the affairs of other nations were over, the Prime Minister announced to a standing ovation from US Republican leaders.

Fast-forward two years and Defence Secretary Gavin Williamson couldn’t be more gung-ho on future UK military capability. Britain must be prepared to take military action against countries that ‘flout international law’ or it would risk being seen as a ‘paper tiger’, he said this week.

There is little doubt that Mr Williamson was emboldened by events unfolding many thousands of miles away. 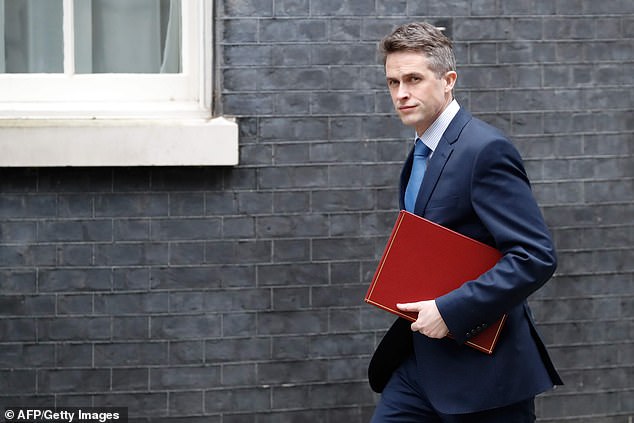 Aided by British and US firepower, Kurdish fighters of the Syrian Defence Force are on the cusp of ‘victory’ against IS.

The Islamic State of Iraq and Levant’s sprawling caliphate, which once covered more than 60,000 square miles in Syria and Iraq, is now squeezed into less than one square mile in the Syrian desert.

There, a few hundred jihadists waged some of the fiercest fighting of the war this week, knowing the end is near.

An attempt to negotiate safe passage has failed, and they’re pounded by coalition airstrikes. Yet still they fight back with small arms fire and suicide attacks. It is futile. The extremist Islamic state they dreamed of will be gone in days.

So as the coalition scales down its air campaign and the US starts to pull its troops from Syria, what are we leaving?

Ask any military chief if the battle is won and the answer is a resounding ‘No’.

Major General Christopher Ghika, Britain’s top commander against IS, says it is forming worldwide sleeper cells and ramping up online propaganda to convert others to their murderous creed. 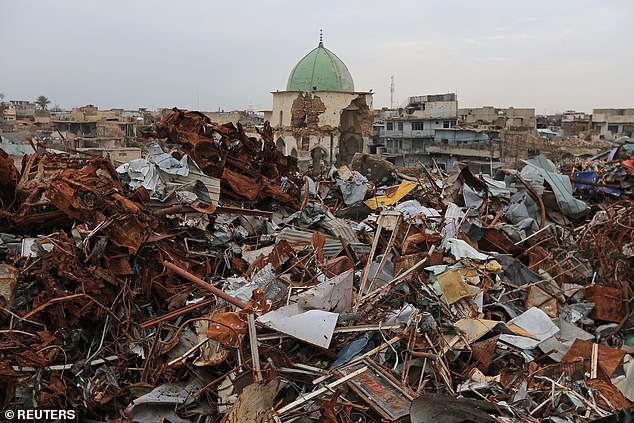 We’ve come a long way since July 4, 2014, when Abu Bakr al-Baghdadi stood in the Grand Mosque in Mosul (pictured in January) and declared a caliphate, an Islamic state

Make no mistake, we’ve come a long way since July 4, 2014, when Abu Bakr al-Baghdadi stood in the Grand Mosque in Mosul and declared a caliphate, an Islamic state. What followed was a rapid accumulation of territory in Iraq and Syria; slick propaganda videos including those showing Jihadi John – the Briton Mohammed Emwazi – beheading Western hostages; a flood of foreign fighters and supporters, such as four schoolgirls from East London; and the emergence of IS as a disciplined force with sophisticated weaponry.

Its success sent shockwaves around the world as its brutality spread to inspire attacks in Paris, London and Manchester, causing the deaths of scores of civilians.

At its peak from 2014 to 2015, IS ruled a territory the size of Britain with a population of eight million. It was thought to have almost half as many soldiers as the British Army. A staggering 900 Britons were lured to Syria and Iraq by the promise of an Islamic state.

On the north-east bank of the Euphrates, IS established an ‘external operations cell’ in Raqqa – a unit dedicated to exporting terror abroad using the internet and social media.

Al-Naeem Square has been unofficially renamed by locals – its translation of Paradise Square has become Hell Square thanks to all the punishments and executions held there. Prisoners were lashed or thrown from buildings, beheaded, or shot while crowds were forced to watch. 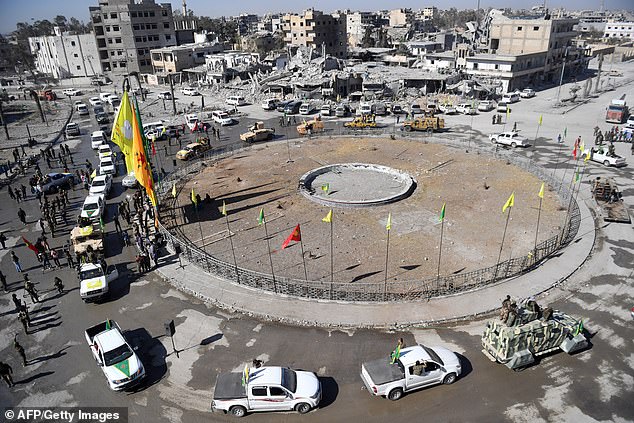 Female fighters of the Syrian Democratic Forces (SDF) gather during a celebration at the iconic Al-Naim square in Raqa on October 19, 2017, after retaking the city from Islamic State

For a time, it seemed almost impossible to imagine how IS would be overcome. It took four and a half years, numerous militias and a coalition of more than 60 countries to get here. The human cost has been enormous, with more than 20,000 civilians thought to have been killed.

IS may have lost its territory, but the ideology has not been defeated. As Patrick McGuinness, the UK’s former deputy national security adviser, said in 2017, Britain won’t be safe unless IS is wiped from the internet by the tech giants.

British spies and soldiers have hacked into the IS propaganda machine, and the RAF has targeted ‘media factories’ where extremists recruit jihadists online. But the military can only do so much.

With Facebook, Twitter, Instagram and encrypted apps such as WhatsApp, inciting terror could hardly be easier. ‘They’ve lost their territory, but they’re everywhere,’ a security source says.

Spy agencies fear IS cells are morphing into a group with Al-Qaeda in nations such as Mali to plot attacks in Europe.

Meanwhile, the surviving British terrorists who went to fight for the caliphate are languishing in Syrian jails or have fled to Libya, Afghanistan or other regions.

The caliphate has been vanquished, but the enemy is by no means defeated.

Q&A: Can Shamima Begum come back to Britain and what happens if she does return?

Can Shamima Begum come back to Britain?

Begum is likely to face many obstacles to returning to the UK. Not least is the fact that she is being held in a secure section of a refugee camp. Security minister Ben Wallace has ruled out any rescue, saying he will not risk UK lives to ‘go and look for terrorists or former terrorists’. If the Kurds in control of the camp hand her over to Iraq or Turkey, she could be put on trial and jailed. However, she could also walk into a British consulate and demand help to be brought home to the UK.

Can the UK strip her of her citizenship?

Ministers have stripped jihadis and Islamic State brides of their citizenship and banned them from returning to Britain. But the ‘deprivation orders’ can be issued only to those with dual nationality – which does not apply in Begum’s case. Ministers cannot take away citizenship if it would leave a suspect stateless.

What happens if she does return to Britain?

She would be arrested. Mr Wallace has said everyone who returned from taking part in the conflict in Syria and Iraq must be investigated by police. Scotland Yard would launch an investigation to determine if she committed any crimes, and if she poses a threat to national security.

Would she be prosecuted?

After Begum and her friends travelled to Syria, the head of counter-terrorism at the time, Met Police assistant commissioner Mark Rowley, said: ‘They have no reason to fear, if nothing else comes to light, that we will be treating them as terrorists.’ Tasnime Akunjee, the solicitor for the families of the three girls, said: ‘Effectively, this is immunity.’ The Director of Public Prosecutions, Max Hill QC, said in 2017 that it was right that those who travelled to Syria out of naivety at a young age and who returned in a state of ‘utter disillusionment’ should be diverted away from the criminal courts.

What offences could Begum be charged with?

Ministers are introducing terror laws to target IS fighters who cannot be prosecuted for other crimes because of a lack of proof. The Counter-Terrorism and Border Security Bill would make it an offence punishable by up to ten years in jail for anyone to enter a ‘designated area’ abroad unless they can provide a ‘reasonable excuse’. But the proposed legislation could not be applied retrospectively to Begum. The sentence for being a member of IS, or supporting the group, is up to ten years in jail. Other offences that could be considered include disseminating terrorist materials, terrorist fundraising and terrorist training. Any involvement in killings could lead to a murder charge.

How easy would it be to bring a prosecution in Britain?

Even if Begum assisted in atrocities or committed other crimes such as encouraging others to go to Syria, it would be difficult to prove. Jihadis returning to their home countries have been prosecuted on the basis of fingerprints recovered by American troops from bomb parts on the battlefield, but it is unlikely that evidence would have been gathered on the activities of a 15-year-old jihadi bride.

So how will she be treated by the UK authorities?

Begum is likely to be given a temporary exclusion order (TEO), lasting up to two years. The order, which she has to agree to in order to get back into the country, is approved by a judge before being issued by the Home Secretary. It makes it illegal for an extremist to return to the UK without informing the authorities and agreeing to be monitored. It is supported by cancelling their passport and adding their names to watch lists against which every person arriving in Britain is checked. Anyone on a TEO has to agree to a range of conditions, including strict police supervision. Last night The Times reported that plans for a TEO for Begum were already under way.

Father 'froze in fear' after spotting creepy floating object above his 13-month-old daughter's cot
Tragedy as groom is killed in freak flash flood on dream Costa Rica honeymoon
Paul Manafort 'offered to help Ecuador negotiate handover of Julian Assange to the U.S.'
Woman who was sexually assaulted by Brock Turner reveals her identity
Boris was my Henry VIII - and I was his Anne Boleyn, says Jennifer Arcuri
Donald Trump insists it's not his fault if a Democrat wins the Kentucky governor's race
Hong Kong leader Carrie Lam freezes travel to Wuhan, shuts schools and cancels public events
THIRD 'unknown origin' case of coronavirus is confirmed in OREGON