For many people, the name Tonypandy means little, except perhaps when applied to the late Viscount Tonypandy, a much-loved Speaker of the House of Commons in the Seventies and Eighties.

However, for socialist rabble rousers such as Labour’s Shadow Chancellor John McDonnell, the name of this former coal-mining town is seared as deeply into their memories as Orgreave, Wapping and other places where violent militancy was dealt a bloody nose by the forces of law and order.

According to Left-wing mythology, Tonypandy was the scene of the shameful and brutal suppression of a coal-miners’ strike and rioting in November 1910, with the insurrection finally quelled by the then home secretary — none other than Winston Churchill — who sent in the Army to crush the disturbance. 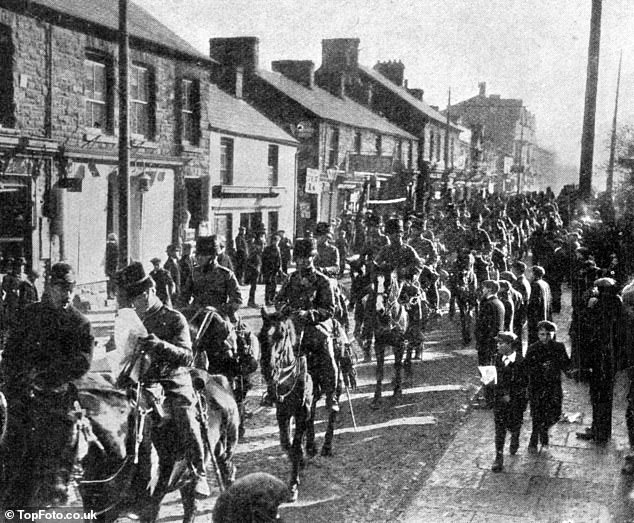 According to Left-wing mythology, Tonypandy was the scene of the shameful and brutal suppression of a coal-miners’ strike and rioting in November 1910, with the insurrection finally quelled by the then home secretary — none other than Winston Churchill — who sent in the Army to crush the disturbance. A scene from the incident is pictured

If you listened to McDonnell this week, you might start to believe that the way Churchill and the British Army behaved at Tonypandy outweighed their courage decades later in liberating Europe from tyranny.

Yesterday, when justifying calling Churchill a ‘villain’, McDonnell told ITV News: ‘He sent the troops into Tonypandy to shoot the miners, and a miner died. Others were injured. It was to break a strike.’

Later in the interview, McDonnell repeated his claim that the troops killed a miner: ‘Tonypandy was a disgrace, sending the troops in, killing a miner trying to break a strike.’

McDonnell added that if his comment ‘prompted a more rounded debate about Churchill’s role, well, I welcome that’.

As a historian, I would certainly welcome a more rounded debate about Winston Churchill — or indeed any historical figure.

No serious historian would ever claim that Churchill was without flaws, some of which were very large indeed. And yet McDonnell’s egregious misrepresentation of the events that took place in Tonypandy are so shocking that they cannot go unchallenged.

The truth is almost the complete opposite of what the Shadow Chancellor claims.

The problem is that hard-Leftists such as McDonnell and his acolytes — who predictably attacked Churchill on Twitter yesterday — are utterly wedded to the Marxist narrative that the murderous forces of capitalism crush the workers into poverty and early graves.

Any presentation of facts that may conflict with their blinkered worldview will simply be dismissed as Right-wing lies.

So what exactly are the facts? What did happen in South Wales back in November 1910, and why do the events in a small town a long time ago still resonate so deeply for the Left?

The roots of the story lie in the summer of that year, when a dispute between miners and management broke out at a colliery near Tonypandy over rates of pay.

On September 1, the owners locked out nearly 1,000 pitmen after a disagreement over the rate at which coal was to be extracted from a newly created seam. This was despite the fact that the dispute involved only 70 workers. This resulted in the 12,000 miners who worked for the local mining cartel — called the Cambrian Combine — going on strike on November 1 in support. Matters soon turned ugly — and then violent.

Striking and picketing miners tried to stop the enginemen and stokers from ensuring that the pits did not fill up with water and poisonous gas.

In most instances, the miners were successful in turning the workers away, but some, such as David Deere, a winding engineer at the Clydach Vale pit, were determined to get through.

On Monday November 7, he tested his luck.

‘I went on, and soon had a crowd of hundreds round me and could get no further,’ he told Daily Mail’s Special Correspondent. ‘It was one man against 1,000.

‘I turned to one side towards High Street and at once I was off my feet. For 50 yards I never touched the ground. They were striking me and pushing me against the wall. At last I got into a doorway and a brave woman, Mrs Duveen, let me into her house.’

For the next two hours, Deere stayed inside, fearing for his life. Throughout the rest of the day, the miners paraded around the town, and cared little for the fact that hundreds of ponies had been left in the pits without food or water, and with dangerous gases building up.

It was by that night that local officials were fearing the situation would turn worse, with one informing the Mail that he hoped some troops that had been requested from the Home Office would turn up.

The official’s hopes were in vain, because although Winston Churchill had dispatched two squadrons of the 18th Hussars to Cardiff from Marlborough, they had still not arrived, and — despite the claims of John McDonnell — the home secretary was extremely reluctant to use them.

They were not to arrive in Cardiff until 6.30pm the following evening. The Chief Constable of Glamorganshire, Captain Lindsay, was desperate for troops, and asked the Home Office for the Hussars to come as soon as possible.

Churchill’s reply was to dismay him, and was to be lambasted as ‘vacillation’ by an editorial in this very paper.

‘You may give the miners a message from me,’ Churchill cabled. ‘Their best friends [the Government] are greatly distressed at the trouble which has broken out, and will do their best to help them get fair treatment.’

After calling for a cessation of rioting, Churchill continued: ‘Confiding in the good sense of the Cambrian Combine workmen, we are holding back the soldiers for the present and sending police instead.’ In other words, he was showing precisely the kind of restraint that John McDonnell says was shockingly absent.

Tuesday, November 8 would prove to be fateful. With a limited local police force, and with Churchill hesitating about sending in the troops, the miners had the town to themselves.

As a force of 270 London policeman were not to arrive until around 10 o’clock that night, they were too late to stop much of Tonypandy being laid waste by a marauding mob, who smashed and looted nearly every shop and tried to light several fires.

It was estimated that they caused some £30,000 worth of damage — the equivalent of some £12 million today. Yet there was no mention of that in the avalanche of Left-wing condemnation of Churchill yesterday. 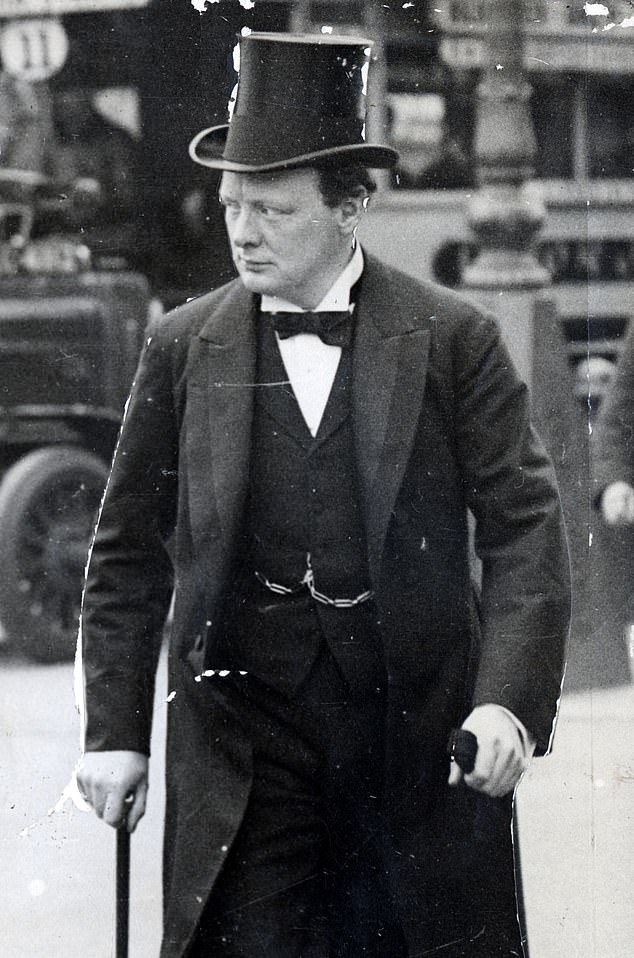 When the police finally did arrive, several baton charges were made against the rioters, and around 120 of the local men were injured. One of them, Samuel Rhys, received a blow to the head which fractured his skull.

He would die a few days later, and would be the only fatality in the riots.

His sad fate is of course completely contradictory to the claim made by McDonnell on TV yesterday: he would have us believe that Rhys had been shot by the Army. Yet as we have seen, the Army was still on its way to Cardiff when Rhys was injured, and his skull fracture was clearly the result of a blow rather than a bullet.

The baton charges were led by the Chief Constable, Captain Lindsay, who was injured, along with six other policemen. The fact that at least one miner was seen carrying a double-barrelled shotgun is a testament to the bravery of the police.

It would not be until the small hours of the Wednesday morning that the Hussars were finally ordered in and, even then, they did not arrive until around 8am.

Photographs from the time show smart lines of mounted cavalry trotting incongruously through the streets of the mining town as though they have been dispatched directly from the Napoleonic wars.

Their presence would immediately quell the rioting, and for the next few days, they effectively occupied the area. 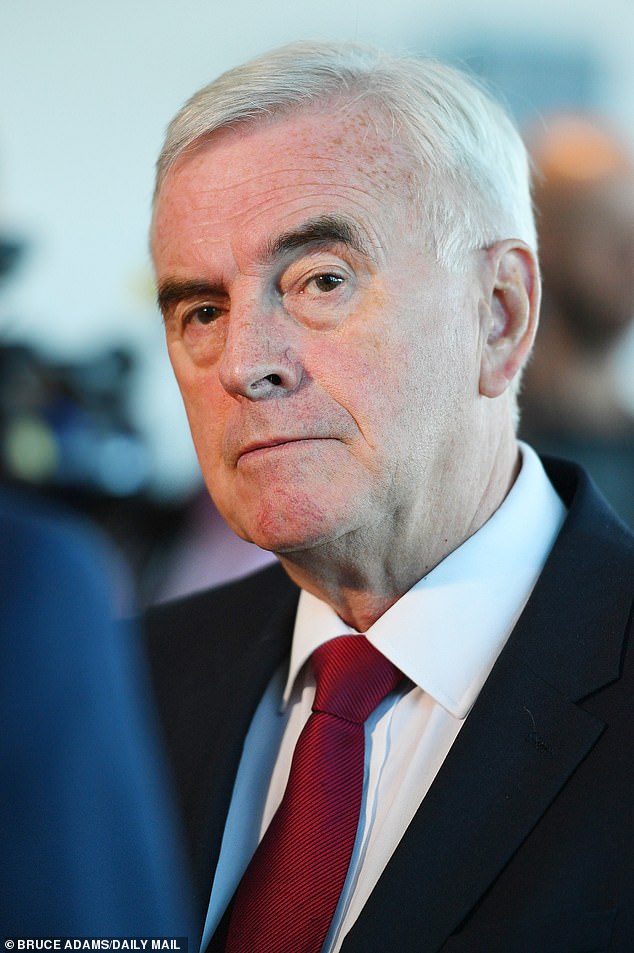 Labour’s Shadow Chancellor John McDonnell, told ITV News: ‘He sent the troops into Tonypandy to shoot the miners, and a miner died. Others were injured. It was to break a strike.’

Although that made good sense in terms of security and safety, Churchill well knew there would be a political cost. He was understandably keen to avoid the impression that the government was trying to settle an industrial dispute by force.

In the Commons, Churchill expressed his dislike at having to use the troops, even though they thankfully caused no deaths.

‘Law and order must be preserved,’ he said, ‘but I am confident that the House will agree with me that it is a great object of public policy to avoid a collision between soldiers and crowds of persons engaged in industrial disputes. For soldiers to fire on the people would be a catastrophe in our national life.’

Ultimately, Churchill would always regret sending in the Hussars. He did his best not to, and even regarded the miners as his friends, but politically, the move backfired, and he would be loathed by some quarters in South Wales — and on the Left — for decades to come.

But the notion, as propagated by John McDonnell, that Churchill willingly sent in the troops to shoot people is just bad history. Churchill was no villain.

Review of St Regis Bal Harbour hotel in Miami Beach graced by Michelle Obama and Sofia Vergara
Woman shares a shocking photo that proves why you should be vacuuming your mattress EVERY time
Emmanuel Macron embraces Luxembourg's Xavier Bettel amid Brexit spat
Sir Elton John's emotional prayers as he lay 24 hours from death with infection
Excitable Edgar the well-meaning but accident-prone dragon and star of John Lewis's Christmas advert
Centuries of inbreeding among European royals caused the deformity known as the 'Habsburg jaw'
British scientist, 42, races against time to invent a vaccine that will stop coronavirus deaths
700,000 Britons face week-long wait over NHS coronavirus volunteering