Four police officers and multiple civilians have reportedly been injured in an active shooting at an Illinois warehouse.

The shooting is at Henry Pratt Company at 2pm local time.

There are unconfirmed reports that the shooter is a disgruntled ex-employee who was recently fired.

According to police dispatch phone calls, at least five people have been injured.

in Illinois reports that four of those people are cops and that ‘multiple’ civilians have also been injured but police are yet to confirm the numbers.

There are a number of fire trucks at the scene in addition to a SWAT team.

The warehouse is near several schools and a university. The schools have been placed in lock-down. The shooter is still at large. 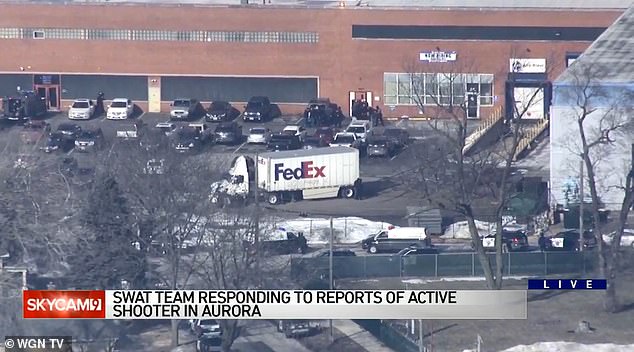 The shooting was first reported at the Henry Pratt Company in Aurora, Illinois, at 2pm on Friday

It is not yet known if the shooter opened fire before police arrived at the scene or if the gunfire started once authorities were there.

The police department confirmed the shooting on Friday afternoon in a handful of brief tweets.

‘We will provide more information once confirmed.

‘We have an active shooter incident at 641 Archer Av. This is an active scene. Please avoid the area,’ said a second tweet.

Henry Pratt is a water valve manufacturing company.  A witness who works nearby told : ‘We heard about three or four shots.

‘We had the kitchen open, the door, we could hear it. We heard three [shots],’ she said.