A furious mother is demanding justice after sickening footage of a bully kneeing her 13-year-old daughter is dismissed by police as ‘just children fighting.’

Anna Morley was sent the shocking clip of her daughter, being kicked in the head and wrestled to the ground.

The footage was filmed by another teenage girl and circulated on social media and shows the alleged victim in an orange top being confronted by another girl.

A third girl then pushes the attacker towards the victim with her foot.

The 16-year-old alleged bully then grabs the victim’s hair, repeatedly kneeing her in the head and then dragging her to the ground. 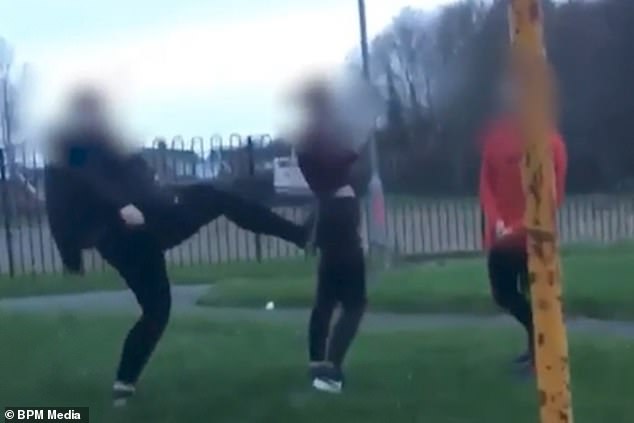 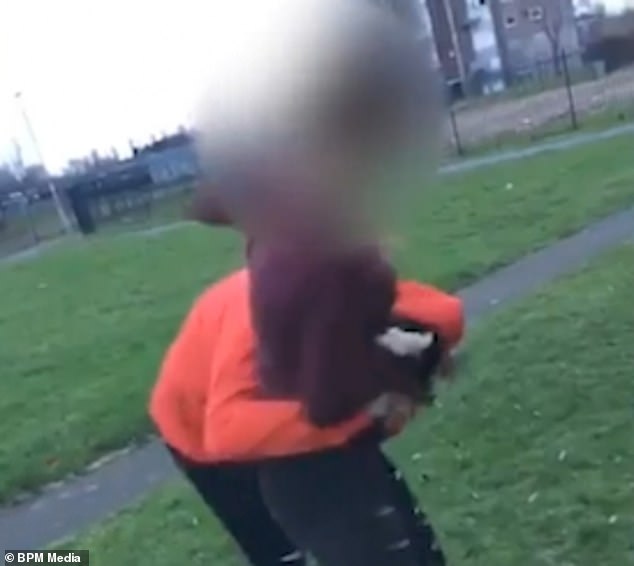 The 16-year-old has the girl in a headlock. The footage was filmed by another teenager and circulated on social media 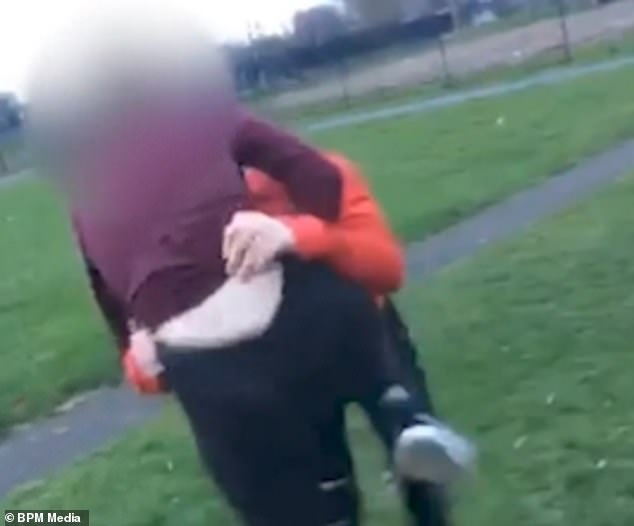 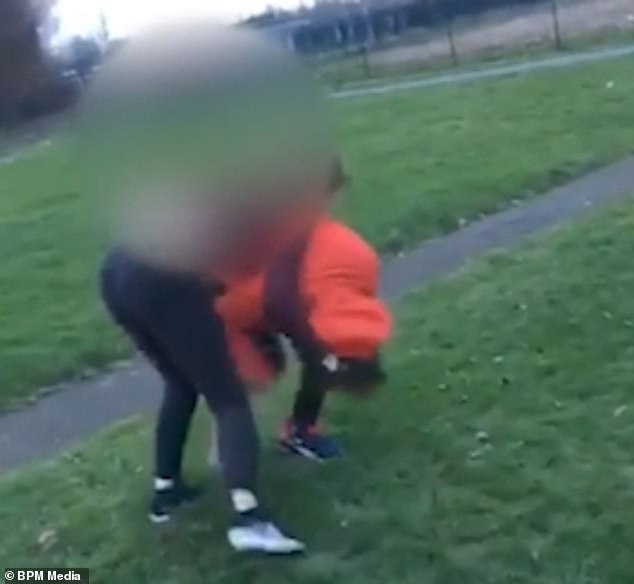 The alleged victim then appears to be thrown to the floor. The assault occurred in Royal Park in Immingham on January 16

The startling footage is another reminder of the violence being meted out on the schoolyard and then circulated on social media in Wild West Britain.

Ms Morley, from Habrough, said although she knows the identity of the girl responsible, aged 16, she said Humberside Police is not taking further action.

She claims the force dismissed the assault as ‘just children fighting’ and would not pursue the matter.

Humberside Police have been approached for comment about the incident.

Ms Morley said: ‘I just find it shocking that they have just dismissed it. It’s clearly an assault.

‘I don’t understand what that’s teaching children of today.

‘It’s showing them it’s okay to do that. Something needs to be done.’

The assault happened in Roval Park in Immingham on January 16, with footage of it sent to Ms Morley by another mother.

Ms Morley said the attack followed a series of other incidents involving the same 16-year-old at the girls’ school, Oasis Academy Immingham.

These range from scuffles to an incident where detergent was thrown in her eyes.

The 44-year-old said: ‘She’s angry with the world. She doesn’t seem to fit in very well and gets a lot of trouble her way.

‘But it doesn’t mean that people can go round assaulting her like that – and it’s not the first time.

‘I think it’s just happening far too much. If that’s the response that the police are giving, it’s not going to stop.’

Ms Morley said the school staff had tried to deal with the bullying and had advised her to contact the police.

But officers, she claims, refused to take further action despite repeat contact with the force.

She said: ‘I was told they are not taking any further action. Police said as far as they are concerned it is just children fighting.’

Vice President Pence heads to Vermont for the weekend
Pound steadies after biggest sell-off since 2016
Extinction Rebellion activist storms out of Sky News interview
Sex worker, 24, 'killed by Sydney knifeman' was a 'beautiful, loving woman', her mother reveals
Informant on ISIS leader Abu Bakr al-Baghdadi even had his dirty underwear for DNA testing
The world's finest collection of malt whisky is up for sale for £8m
Virginia Roberts claims the FBI have warned her there is 'a credible death threat made against her'
Greta Thunberg tells Bristol mass rally 'I will not be silenced as the world is on fire'