Germany narrowly avoided a recession after its economy flat-lined, but did not shrink at the end of last year, it was announced today.

In the fourth quarter of 2018, the German economy reported no growth as foreign trade made little contribution to Europe’s largest economy.

The result was weaker than the 0.1 per cent growth expected by market analysts and added to negative signs piling up about the 19-country Eurozone economy.

The lackluster figure released today by the state statistics agency followed a 0.2 per cent fall in output during the preceding third quarter.

Business spending on machinery and equipment as well as construction supported the economy in the fourth quarter and kept Germany from suffering two straight quarters of negative growth, one definition of a recession. 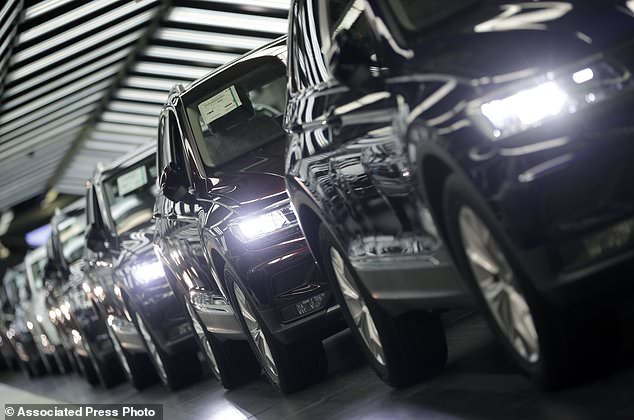 Germany’s economic growth has stagnated in the last three months of the year. Pictured: Volkswagen cars during a final quality control at the VW plant in Wolfsburg

Growth last year was also hit by troubles in the auto industry when automakers had difficulty getting new cars certified under new emissions tests, and by low water on the Rhine River that interrupted commerce.

The slowdown led the European Commission last week to cut its growth forecast for Germany for this year to 1.1 per cent from 1.8 per cent.

The weak second half followed stronger performance in the first six months, leaving growth for the full year at 1.5 per cent.

Recent economic indicators have been weak, leading to speculation that the European Central Bank may hold off raising interest rates longer than originally expected.

The bank has said it will hold rates at record lows at least until ‘through the summer’ of this year. Analysts say it may push back that earliest possible date in its policy statement if signs of weakness continue.

The head of the ZEW economic institute said the German economy will probably expand moderately this year and likely achieve around 1 per cent growth.

Achim Wambach said: ‘The most likely scenario is that there is moderate growth. 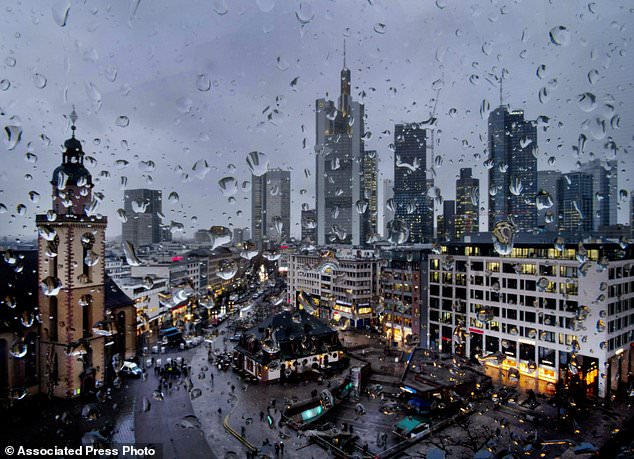 Germany managed to avoid recession in the last quarter of 2018. Pictured is Frankfurt’s banking district

‘The forecasts of around 1 percent growth for 2019 are realistic.’

‘Order books are still well filled. But expectations are deteriorating,’ he said, pointing to concerns about Britain’s forthcoming exit from the European Union and trade disputes.

‘A hard Brexit doesn’t help anyone. I think the negotiating parties see it that way too and will come to a solution,’ he added.

He said the fourth-quarter weakness could no longer be attributed to the auto sector problems since vehicle production edged up in the last three months of the year.

He forecast 1.0 per cent growth this year but added ‘there are significant downside risks to this forecast.’

Economist Carsten Brzeski at ING Germany said that ‘the German economy escaped a technical recession with the smallest margin possible. The black eye just got blacker.’ He said, however, that many economic fundamentals remain strong.

A low unemployment rate of 3.3 per cent is helping support domestic demand.

‘The upside from today’s data is that it can hardly get worse,’ Brzeski said.

‘Economic fundamentals remain solid and from here on, chances of a gradual rebound are still much higher than chances of yet another disappointment.’

Grisly discovery of human bones delays Sydney light rail project AGAIN
Prince Louis poses in a puppy jumper from Trotters in photos released to mark his 1st birthday
Tyson Fury defeats Tom Schwarz by second round TKO in Las Vegas on ESPN debut
Mother, 32, and daughter, nine, are homeless after 'psycho' ex burned down home
Eton-educated former soldier inherites £100m and the title of Duke of Roxburghe
Police will use high-tech scanners to 'frisk' suspects without them knowing from up to 20 yards away
Tottenham defender Serge Aurier's brother is shot dead at 5am outside a nightclub in Toulouse
Amber Heard steps out for dinner in London