Roughly eight months after it fell silent during a planet-wide Martian dust storm, and just weeks after celebrating its 15th anniversary on the red planet, NASA is finally saying goodbye to the Opportunity rover.

The space agency has made hundreds of attempts to contact the rover since it powered down back in June, when dark skies prevented its solar battery from charging.

In a last-ditch effort, NASA sent out a final set of commands on Tuesday in hopes it might finally respond.

But once again, their calls were met only with silence.

NASA confirmed the grim news in a press conference Wednesday afternoon, where it officially bade farewell to the long-running Mars exploration mission. 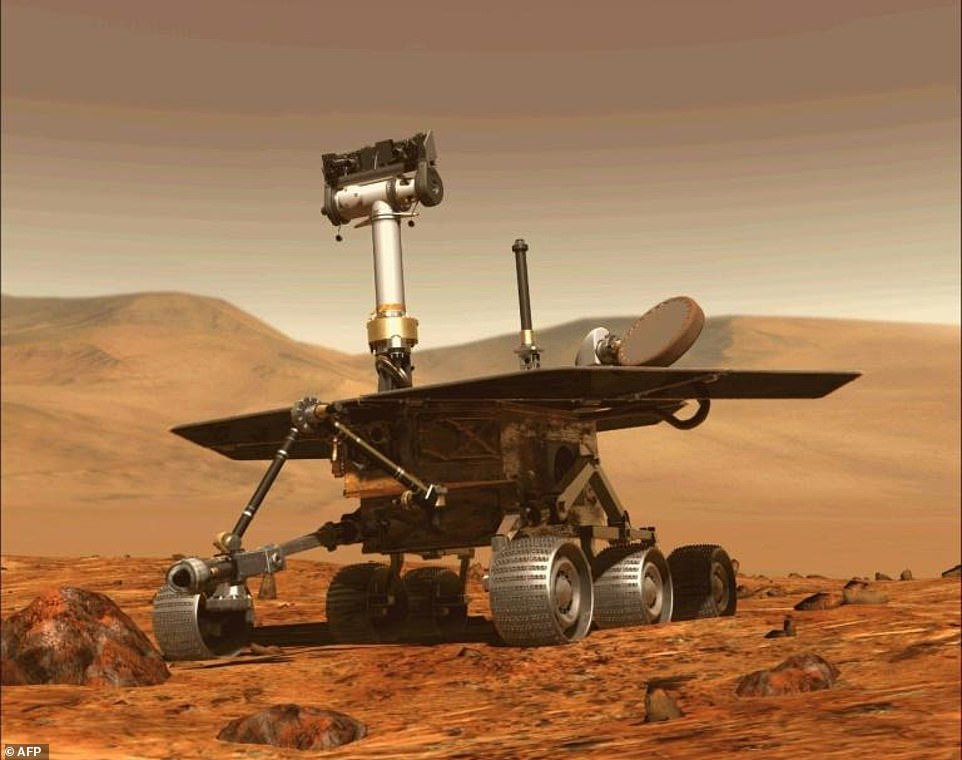 The agency made one final attempt to contact Opportunity Rover (pictured) eight months after the spacecraft last made contact. A giant dust storm blocked sunlight from Mars in 2018, stopping Opportunity’s solar-powered batteries from being able to recharge

‘I’m standing here with a sense of deep appreciation and gratitude, as I declare the Opportunity mission as complete – and with it the Mars exploration mission as compete,’ Thomas Zurbuchen, associate administrator of NASA’s Science Mission Directorate, said during the Wednesday press conference.

‘I will never forget the amazing work that happened here, it transformed our understanding of the red planet.’

The Mars rover, affectionately known as ‘Oppy,’ far surpassed the expectations of the team that’s operated it for so long.

But somehow, Oppy survived 14-and-a-half years after touching down on the red planet, pushing its limits to travel almost 30 miles to reshape our understanding of Mars.

It withstood years of extreme temperatures and radiation, but finally met its match this past spring, when a planet-wide dust storm encircled Mars and blotted out the sun.

This proved to be a fatal blow for Opportunity, as the rover relies entirely on solar energy to power its instruments.

Opportunity fell silent back in June, with no way to power its solar battery as dust continued to block out the sun. The animation shows how the rover (centre) was directly in the path of the raging storm

More than 1,000 recovery commands have been sent to the rover in a bid to revive the esteemed machine.

In August, NASA set a 45 day deadline to declare ‘Oppy’ dead if no response was heard from the aircraft.

In October, this deadline was extended to January to re-evaluate the situation.

Sadly, the space agency decided it can delay the inevitable no more and today will be forever etched in the annals of time as the date NASA abandoned hope of salvaging Opportunity. 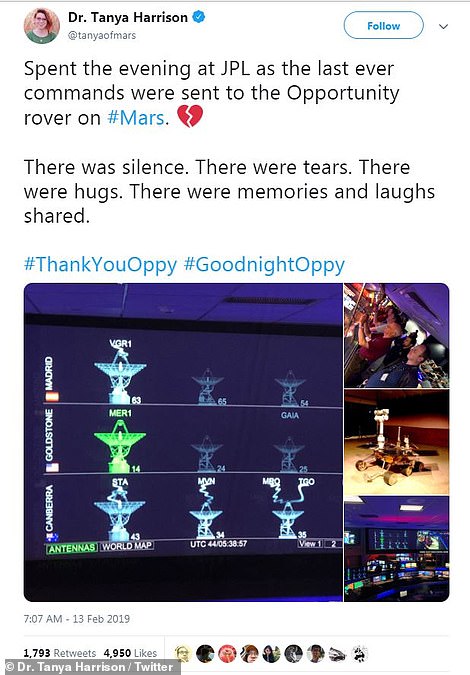 Dr Tanya Harrison took to Twitter to talk about the profound sadness felt by herself, the Opportunity team and the wider scientific community when the nomadic rover failed to respond to the final contact attempts from scientists

It retires with an a admirable 5,352 sols under its belt. That is a total of five thousand, three hundred, and fifty-two days on Mars.

In this time it racked up 28 miles (45 km) on the planet and sent back a wealth of priceless data to NASA.

Brief hope for a rekindling of Opportunity’s communications with Earth arrived when it was spotted by NASA’s Mars Reconnaissance Orbiter with its HiRISE high-resolution camera several months after last contact, but the scientists at NASA failed to establish contact with the rover.

Opportunity landed on Mars in 2004 after being launched from Cape Canaveral with its fellow golf cart-sized twin, Spirit.

Spirit saw its demise arrive in 2011, a year after it got stuck in sand and communication ceased.

‘It’s no easier saying goodbye now to Opportunity than it was to Spirit, project manager John Callas told The Associated Press.

‘It’s just like a loved one who’s gone missing, and you keep holding out hope that they will show up and that they’re healthy,’ he said.

‘But each passing day that diminishes, and at some point, you have to say “enough” and move on with your life.’

Opportunity’s original goal was to search for clues about the history of water on Mars as part of a three month long mission. 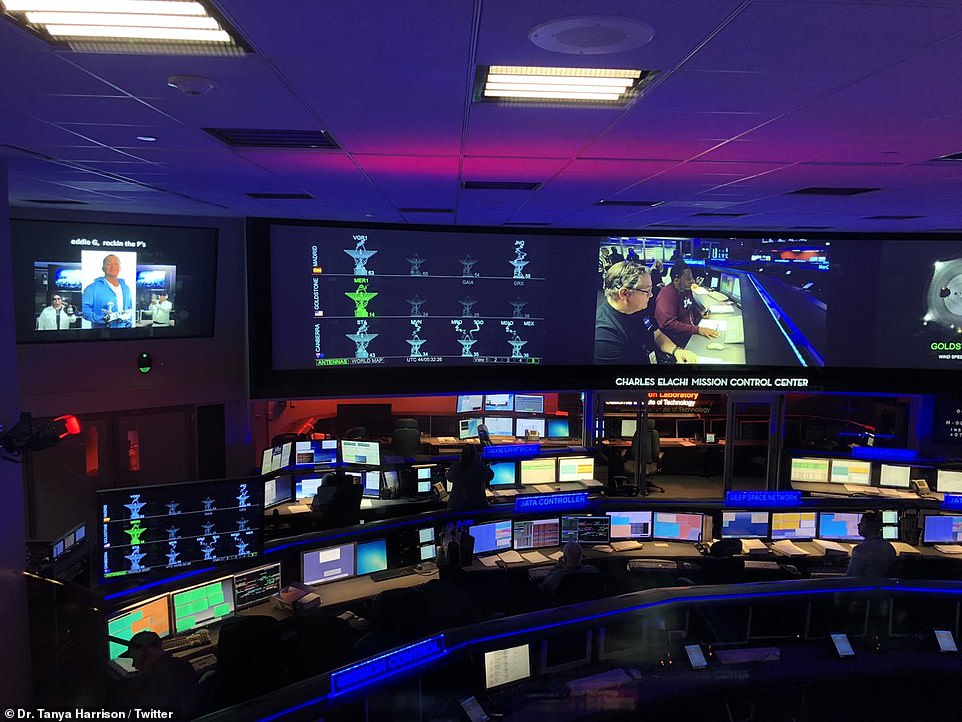 NASA’s control room trying to contact opportunity will no longer try and work with the rover. It first landed on Mars in 2004 after being launched from Cape Canaveral with its fellow golf cart-sized twin, Spirit 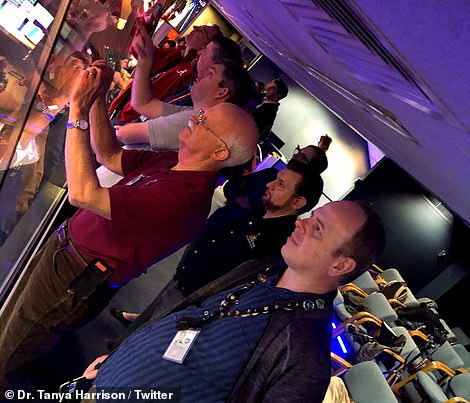 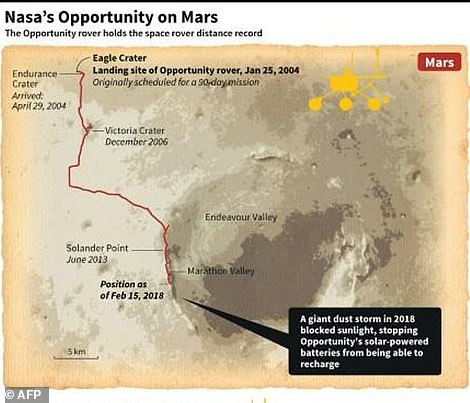 Opportunity’s staffers had been hoping to rekindle the connection with the rover, but to no avail. No response had been detected by the team (pictured) for eight months. Its path during its long stay is mapped on the right

It was actually operational for a staggering 14 years – 56 times longer than originally anticipated.

Of 43 missions launched toward Mars, only 18 have made it intact, a success rate of around 40 per cent. All those that made it came from the United States.

Rover robots found signs of water in the first rocks they encountered on Mars, as rocks near the aircraft’s landing site contained pearl-shaped rocks. 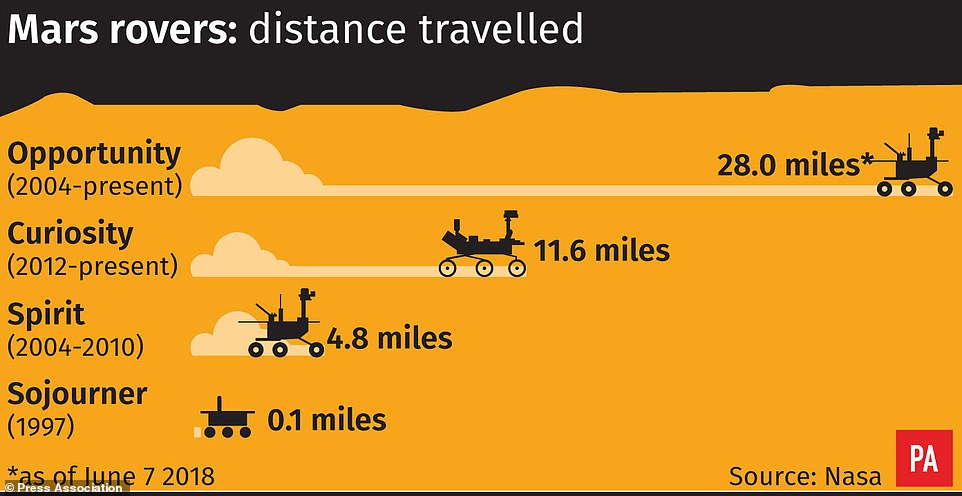 Nasa’s Mars rover Opportunity has travelled further than all other Mars rovers combined. Opportunity landed on Mars in 2004 after being launched from Cape Canaveral with its fellow golf cart-sized twin, Spirit 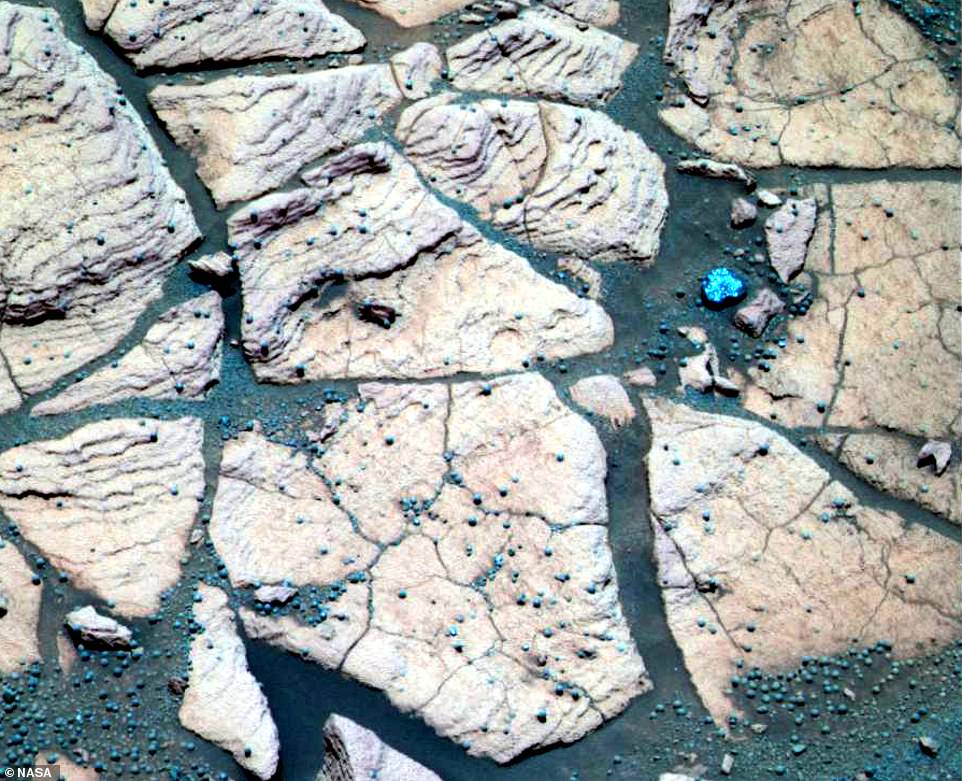 Rover robots found signs of water in the first rocks they encountered on Mars, as rocks near the aircraft’s landing site contained pearl-shaped rocks (pictured) 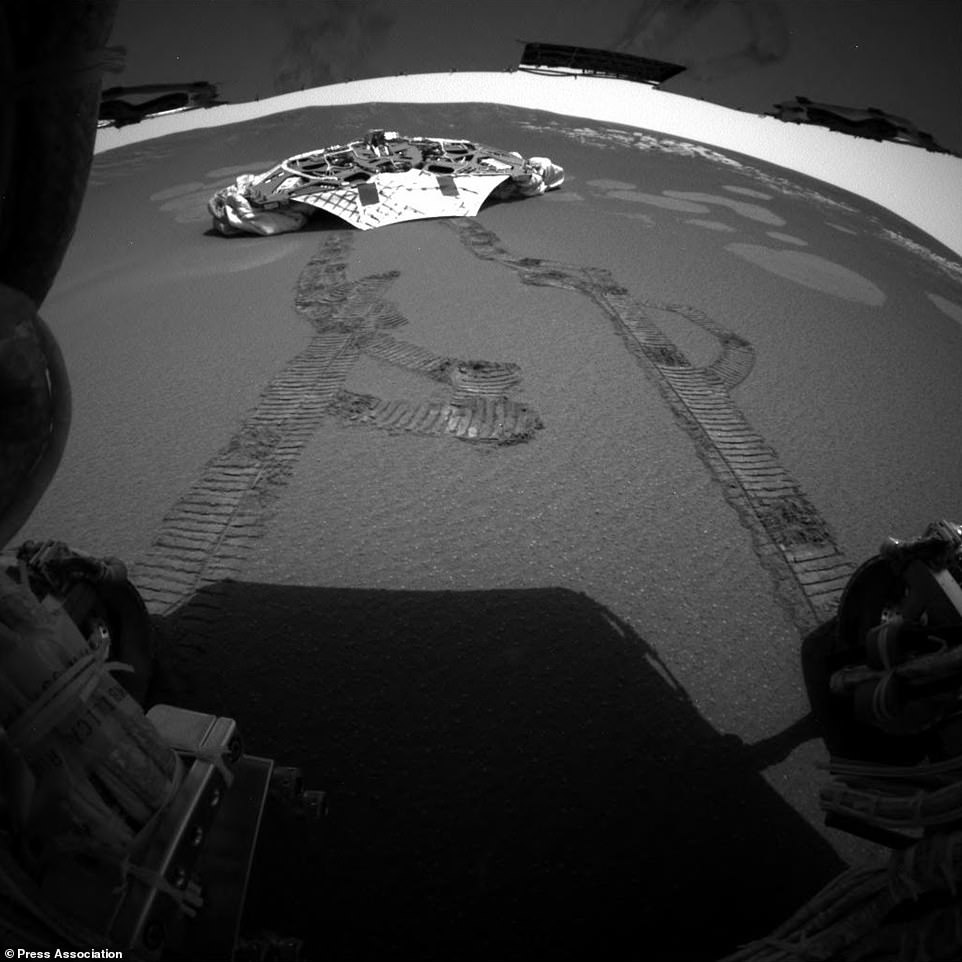 Opportunity’s landing platform, with freshly made tracks. It landed on Mars’ Meridiani Planum plain near its equator on January 25, 2004. Opportunity was only supposed to stay on Mars for 90 days, but lasted an astounding 14 years

It is thought that these formed in pre-existing wet sediments together with what Nasa scientists called: ‘Finely layered ripples, crossbeds, and niches where crystals once grew and were later redissolved’.

Robotic rover missions are an important part of human space exploration because these tools also help inform NASA’s efforts to send people to the surface of Mars sometime in the coming decades.

NASA has vowed to send people to Mars by 2030, but experts say it could take at least 25 years from now before humans could survive on the planet.

WHAT IS THE OPPORTUNITY ROVER?

NASA launched the Opportunity rover as part of its Mars Exploration Rover program in 2004.

It landed on Mars’ Meridiani Planum plain near its equator on January 25, 2004.

Opportunity was only supposed to stay on Mars for 90 days, but has now lasted an astounding 14 years.

In its lifetime, Opportunity has explored two craters on the red planet, Victoria and Endeavour, as well as found several signs of water.

It survived a bad dust storm in 2007 and is now being closely watched to see if it can survive a massive storm that has an estimated opacity level of 10.8, a sharp increase from the earlier storm’s 5.5 tau.

NASA has made several updates to the spacecraft since it landed on Mars, such as its flash memory.