They confirmed rumours they were an item in October last year.

The couple are currently holidaying in Bali, and have shared several loved-up and envy-inducing snaps of the trip on their respective pages. 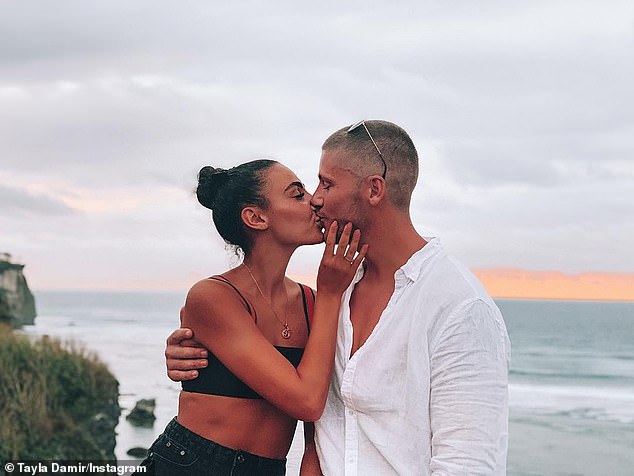 Still going strong! Tayla Damir shared a passionate kiss with her Love Island Australia beau Dom Thomas during a romantic trip to Bali on Tuesday as the pair celebrated his birthday

They are also celebrating Dom’s birthday, and Tayla paid tribute to her beau in a gushing post on Wednesday.

‘Happy birthday my Dommy Bear. From the day you entered my life it’s been nothing but smiles (besides a few tantrum on my behalf here and there when I’m hungry),’ she wrote.

‘Every day I count my lucky stars and wonder how I ended up with such a good looking, loving, caring and beautiful person like you.

‘I hope your day is everything you could ask for and more. I can’t wait to spend many more birthdays with you. I LOVE YOU.’ 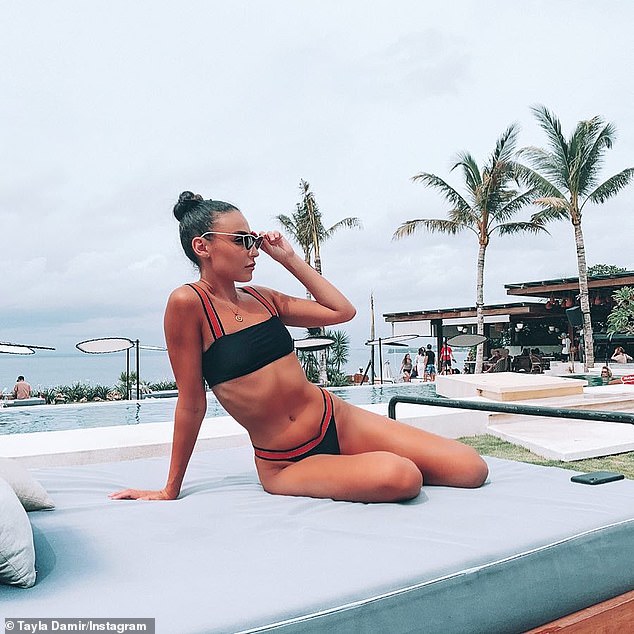 Living her best life: The brunette beauty also topped up her tan at the Ulu Cliffhouse beach club

The day before, the brunette beauty showed off her incredible body in a black bandeau bikini as she lounged by the pool at Ulu Cliffhouse beach club.

Weeks after going public with their romance, Tayla and Dom revealed how they took their friendship to the next level.

Tayla said that without the pressures of having a camera around, her relationship with Dom, 26, happened naturally.

‘It just happened because it was natural, and that’s what felt right,’ she explained.

Tayla added that once she relocated to Sydney from Perth, she began hanging out with Dom as a friend, and from there, they realised they had something special.

‘We started hanging out more and more, and realised we really liked each other, and it just went from there,’ she said. 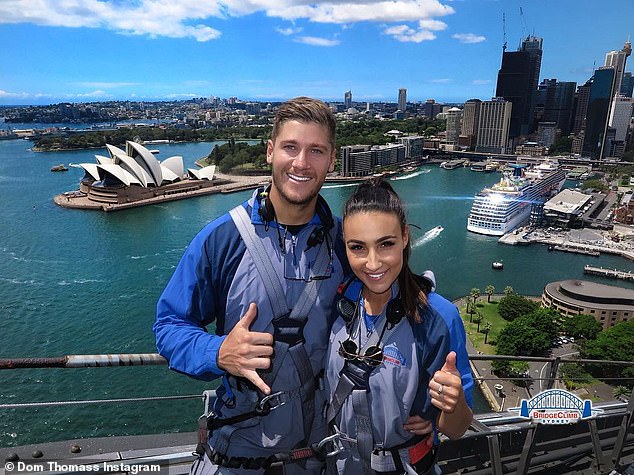 So in love: Tayla and Dom confirmed that they were dating in mid-October

Tayla and Dom confirmed that they were dating on Instagram mid-October by sharing sponsored images taken for Temple Farmhouse in Byron Bay.

Snapped rolling around in bed with a bouquet of white flowers, Taylor cuddled up to her new beau.

‘Cats out of the bag. Most amazing week away surrounded by friends, family and my boyfriend,’ she penned in the caption of the post.

Tayla’s romance with Dom comes after her split with ex-flame Grant Crapp, 22, just two weeks after they won $50,000 on the 9Go dating show.

ayla chose to split the money with Grant during the July 5 finale, meaning they both walked away with $25,000 each.

After she discovered Grant had a ‘secret girlfriend,’ Lucy Cartwright, outside of the hit reality show, she decided to end their whirlwind five-week romance.

Shortly after begging the brunette bombshell to forgive him in a series of Instagram videos, Grant rekindled his romance with Lucy. 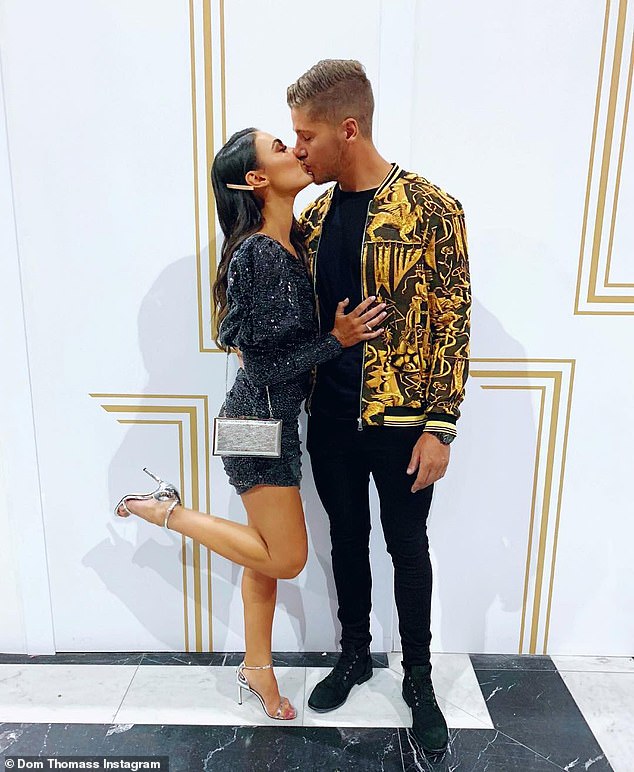 Perfect fit: Weeks after going public with their romance, Tayla and Dom revealed how they took their friendship to the next level. The 22-year-old brunette told 9Honey Celebrity that becoming a couple ‘just felt right’

BRIAN VINER: The Abba-loving extroverts are again they usually're simply the tonic we'd like
Ariana Grande gushes about her first kiss with fiance Pete Davidson
Grease star Olivia Newton-John has only 'weeks to live', claims report
Cardi B wears a pink leather ensemble as she leads stars at Bud Light Super Bowl Music Fest
Amy Childs exudes elegance in a pink gown as she makes a glamorous appearance at the Butterfly Ball
Heidi Klum in most bloody, gory, and over-the-top costume yet at 20th Annual Halloween Party in NYC
The X Factor: Celebrity: Nicole Scherzinger, 41, showcases her jaw-dropping curves
Michelle Keegan snuggles up in Mark Wright's lap as they belt out karaoke tunes