An Australian mother has revealed how she keeps the family budget in check by cutting her dishwashing tablets in half before using them.

Taking to her page, Pinky and Thrifty, the mother shared a snap of her chopped up Logix tablets and said they ‘still clean just as well’ as whole ones.

The tablets, which are available from , are priced at $4.49 for a 30-pack. By cutting the tablets in half, she is able to double the product and do an average load for seven cents. 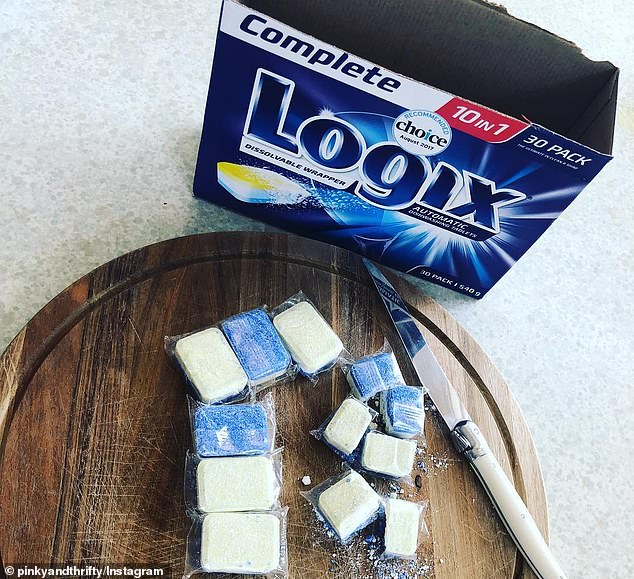 What are the benefits of tablets over powders?

They often contain not just detergent, but rinse aids and other additives that can drastically improve the quality of the clean done by your dishwasher.

The famous red ‘Powerball’ in dishwashing tablets is a rinse aid. It aims to help remove detergent residue from your dishes for that sparkly clean finish we’re all looking for.

Those who saw the mum’s trick online left comments and said they were keen to try the dishwashing trick themselves.

‘Interesting,’ wrote one user. ‘I had never thought about doing this before but it kind of makes sense especially if the halves do just as good a job.’

‘Omg never thought of this. I have two of those stupid dish draws that do half a load each. Always complain that I pay double cause I use two tablets to do one tablets worth of a load,’ another added.

‘We have always done this. Cut ours in half – half a tablet a day we get the pack of 40 for around $6 and it usually last us up to 2 months it’s fantastic savings and value,’ a third wrote. 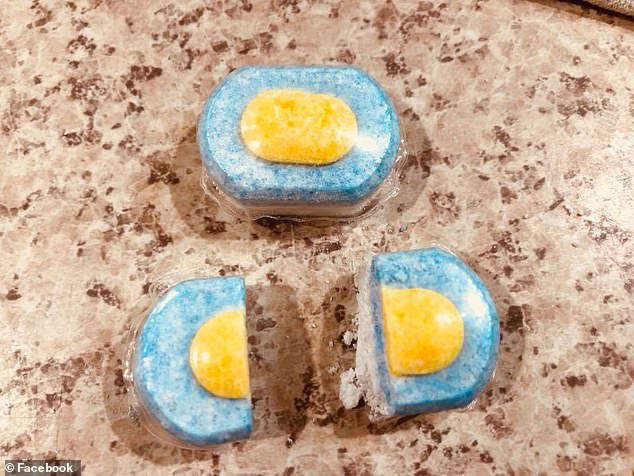 ‘If you’re not fussy, cut dishwashing tablets in half. I find the amount cleans everything just the same so my box lasts twice as long,’ one mum wrote 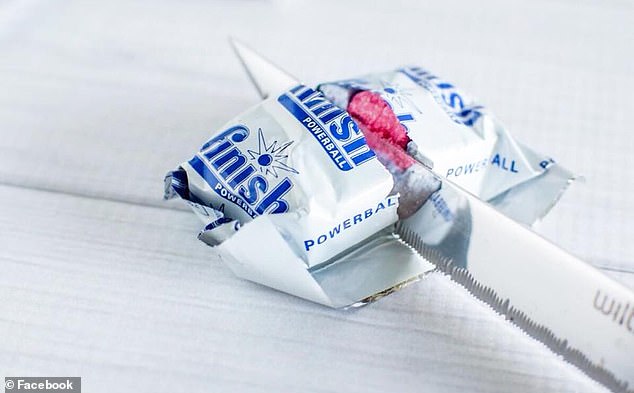 Another revealed how she used to cut her Finish Powerball tablets in half to wash a full load and was pleasantly surprised by how well they worked.

‘Admittedly, I don’t use these ones any more but when I did, I used to cut them in half to literally cut the price in half. They worked just as well as a full tablet.’

Other mums shared tricks for preventing the tablets from becoming stuck in the dispenser.

How can you prevent a dishwasher tablet from becoming stuck in the dispenser?

* It’s possible to not bother using the dispenser at all, and simply place the tablet into the cutlery basket or onto the bottom of the dishwasher, though some companies say their tablets to do not work effectively this way

* Leave the dispenser lid off

* When the remedies above don’t work, you’ll need to replace the entire soap dispenser 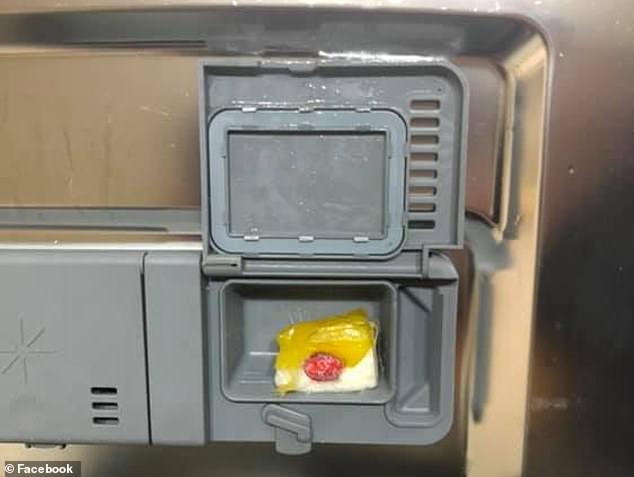 ‘Don’t use the dispenser, throw the tablet straight into the dishes, shut the door, start the cycle.’ one woman wrote.

Another said she will also ‘throw’ her tablet into the bottom of the machine, advice she says she was given by her dishwasher mechanic.

‘I throw mine in the dishwasher, never in the little thing. My dishwasher guy said they are only for powder – never had an issue,’ she said.

Another woman said her solution was to wet the tablet before using, then to pop this into the dispenser while a fourth simply puts it in the cutlery section.

Teen claims his instructor known as the police on him as a result of he was carrying a bandana in cl...
Bill Gates pays tribute to Microsoft founder Paul Allen following death from non-Hodgkin's lymphoma
Trump plans to terminate 'ridiculous' birthright citizenship
Nor'easter storm will drench Washington D.C. and New York this weekend
Melania meets with Microsoft chairman Brad Smith, whose group battles Trump child separation policy
Larry Kudlow defends saying coronavirus was 'relatively contained' and 'Americans are not at risk'
Doorknobs, handrails and shopping trolleys should be coated in copper to prevent spread of Covid-19
Five great white sharks are lurking in the waters off New York and New Jersey-area beaches