Fascinating photos have revealed what life was like for Britons travelling around the world on cruise liners throughout the 20th century.

Pictures show cricketers enjoying a game on deck and ladies sunning themselves on deckchairs aboard Orient Line ships.

One image shows a woman being served a drink on deck in 1937 while another shows crowds waving off one of the giant vessels.

The Orient Line, which delivered both passengers and goods, formed a slow but crucial connection for the British Empire across tens of thousands of miles of ocean. 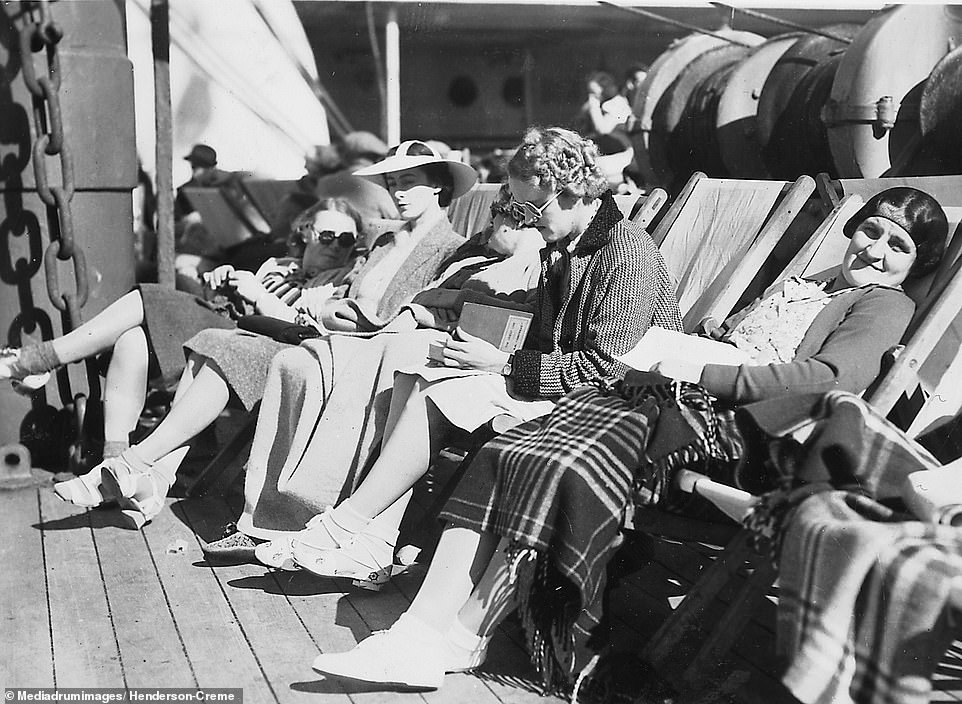 Fascinating photos have revealed what life was life for Britons travelling around the world on cruise liners throughout the 20th century. In this image, five women are pictured reclining and soaking up the sun aboard an Orient Line vessel. It is not exactly when or where the picture was taken 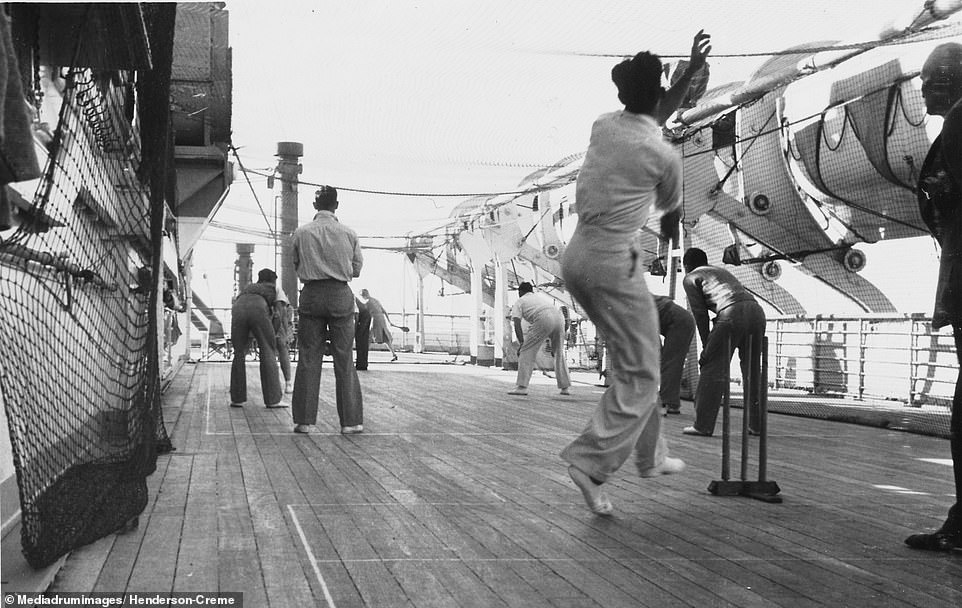 Pictures show how cricketers would practice the sport on deck aboard Orient Line vessels with nets strung up along the side of the ship during the long voyages to and from Britain.  The Australian national cricket team were among the regular travellers on the Cruise Line 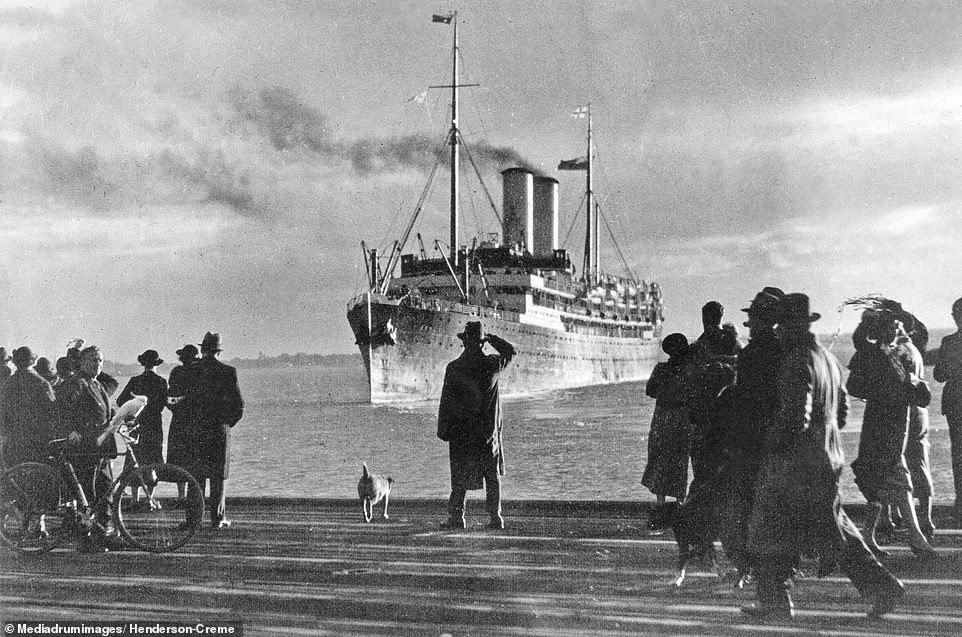 A dog and a cockatoo were among the well-wishers waving off this Orient Line ship form the shore. The images were reproduced in the new book, A Photographic History of the Orient Line 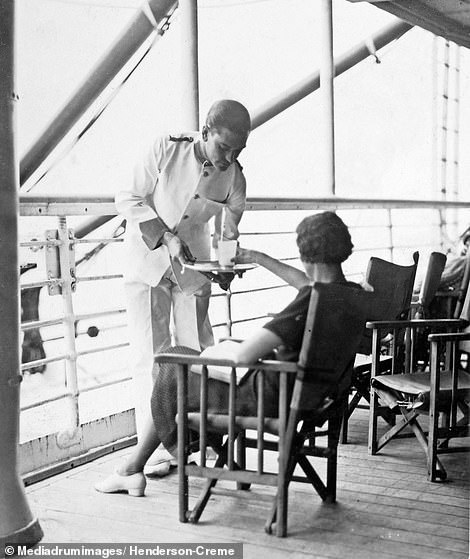 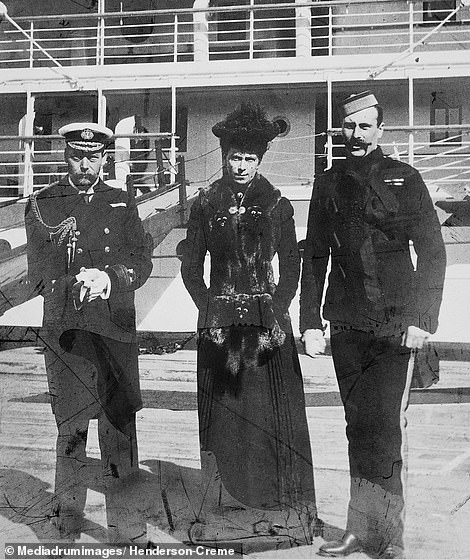 The Orient Line was renowned for the quality of its service, as demonstrated by a picture of a woman accepting a drink while relaxing on deck in 1937 (left). Passengers over the years included the likes of Prince George and Princess Mary – later to become King George V and Queen Mary, who were the principal passengers on the Imperial cruise of the Orient Line ship Ophir in 1901. They are pictured (right) accompanied by Princess Mary’s brother, Prince Alexander of Teck

It also played a significant role in transporting so-called ten pound poms – Britons seeking to build a new life on the other side of the world after the Second World War having been offered passage for the nominal sum of £10.

The company’s history is examined in a new book ‘A Photographic History of the Orient Line’ – by Chris Frame, Rachelle Cross, Rob Henderson and Doug Cremer.

It charts how the firm grew from a relatively minor business to become an operator of high-quality passenger liners between the UK and Australia. 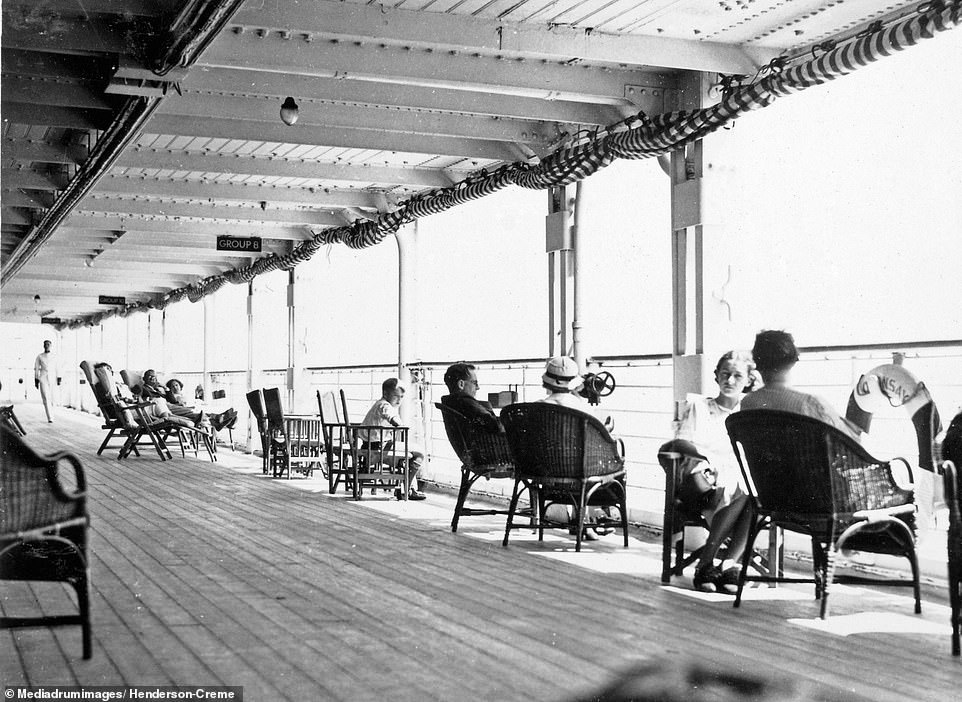 Orient Line ships were known for their broad, shaded promenade decks (pictured). The firm, which delivered both passengers and goods, formed a slow but crucial connection for the British Empire across tens of thousands of miles of ocean 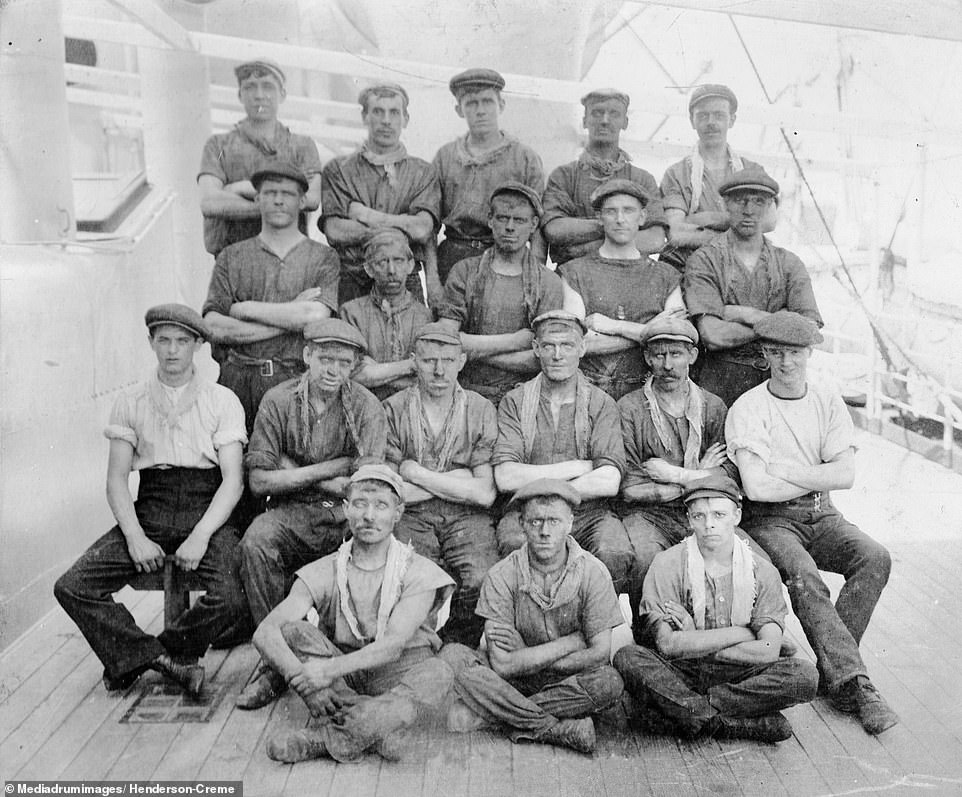 One of the book’s fascinating images shows the men who kept the furnaces fed with coal on RMS Osterley – another of the Orient Line’s ships. The 12,000 ton ship was built in Scotland in 1909 to operate a passenger service between London and Australia before being commandeered as a troop ship in 1915 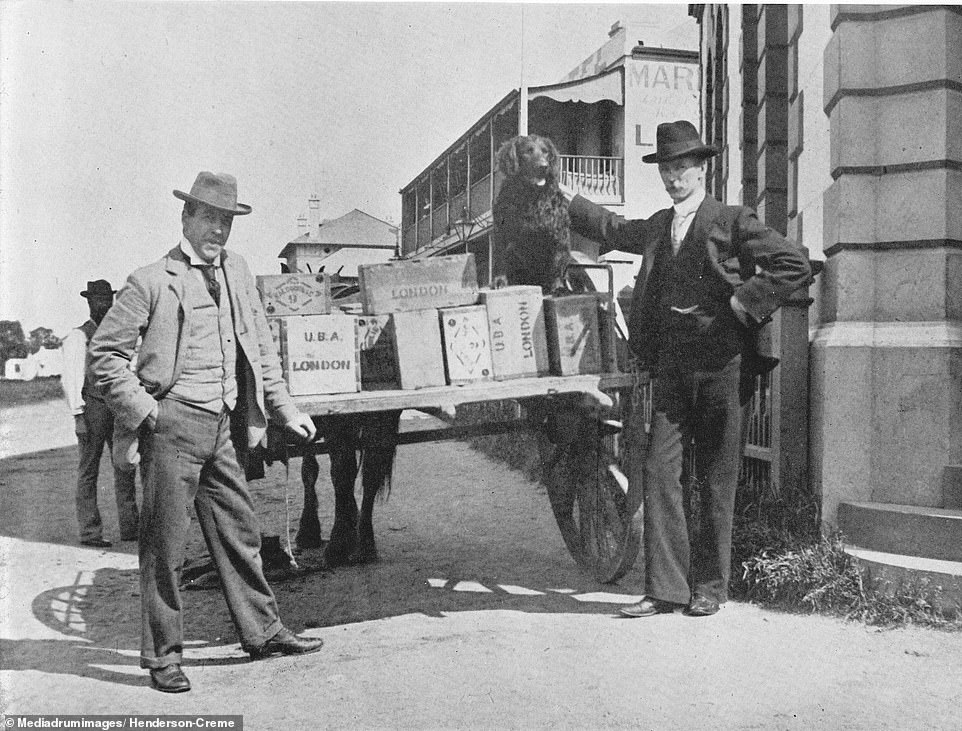 Gold worth millions of pounds would occasionally be transported on Orient Line ships. In this undated photo, taken in an unknown location, two men stand next to what are thought to be crates full of gold before it was loaded on board 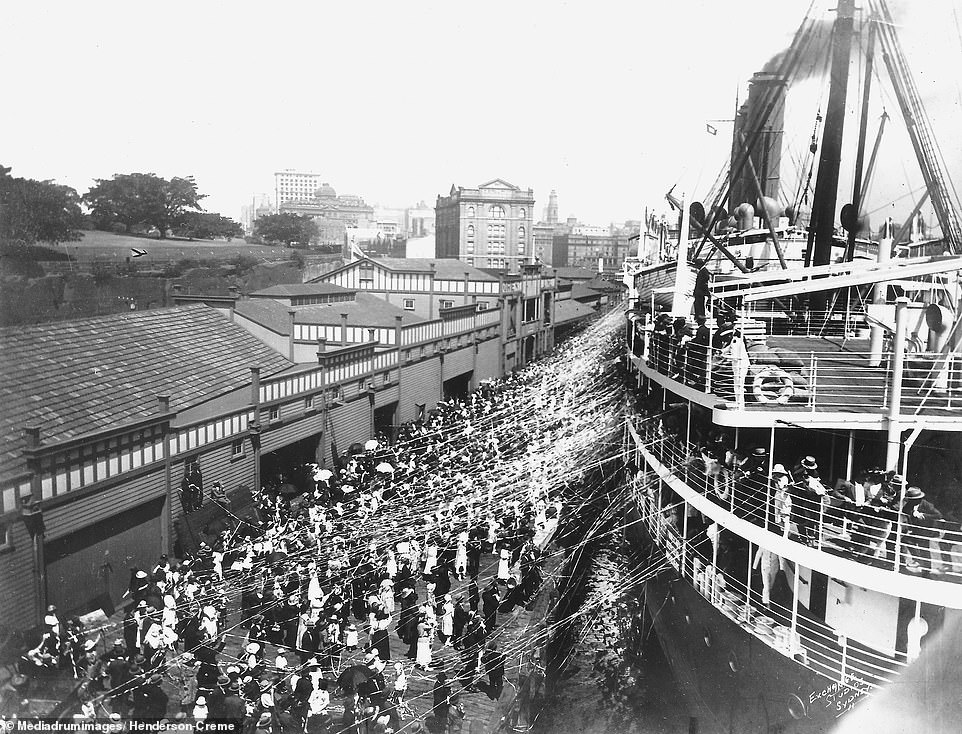 One of the fascinating images shows the Orient Line ship Ormonde pulling away from the company’s wharf in Sydney – an area that now features high-rise apartments leading along a fashionable boardwalk to the Sydney Opera House. Ormonde was in service from 1917 to 1952, serving its last few years as an emigrant ship transporting so-called ten pound poms from Britain to Australia 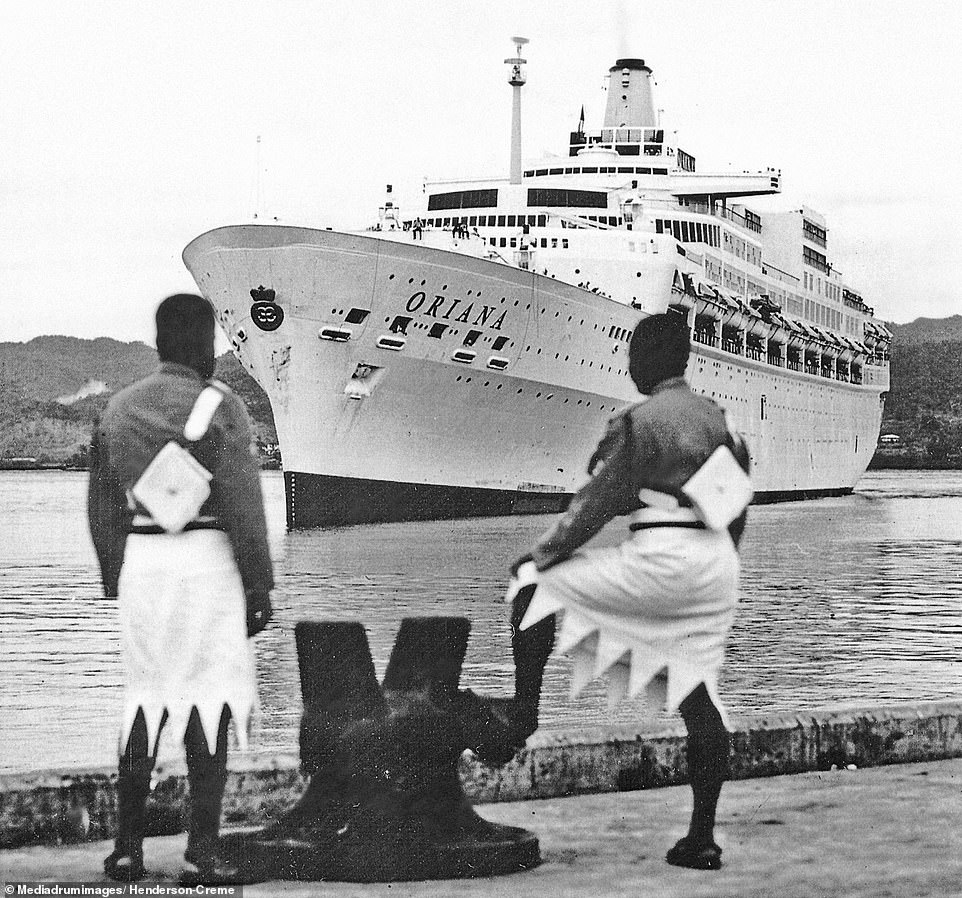 During the final years of her career the Orient Line ship Oriana, launched in 1959, was a familiar sight at South Pacific island ports during cruises from Sydney. In this photograph, believed to have been taken in the early 1980s, she is pictured arriving at the Fijian port of Suva under the watchful eyes of the Fijian constabulary 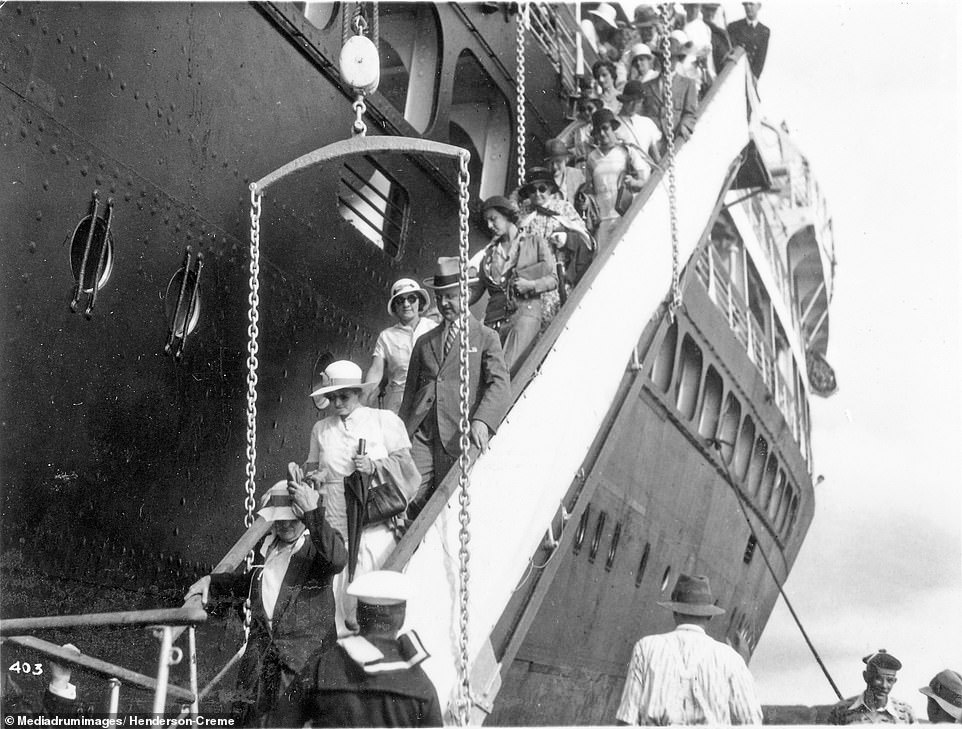 In the days before cruise ships had portable pontoons, passengers at ports where the ship could not go alongside would descend a sometimes swaying gangplank which would be lowered over the side of the ship into the waiting launches below

The Orient Line can be credited with being a pioneer in the cruise industry in Britain from as far back as 1889, the authors said.

‘The Orient Line had a significant impact on shipping, especially in Australia and the United Kingdom. Yet today the importance of the company is relatively unknown away from maritime historians and dedicated ocean liner buffs,’ the authors continued.

‘Despite its undeniable impact on the development of modern Australia, the story of the Orient Line is often relegated to a chapter or two in books about P&O, largely thanks to its acquisition and eventual absorption by the larger company.’ 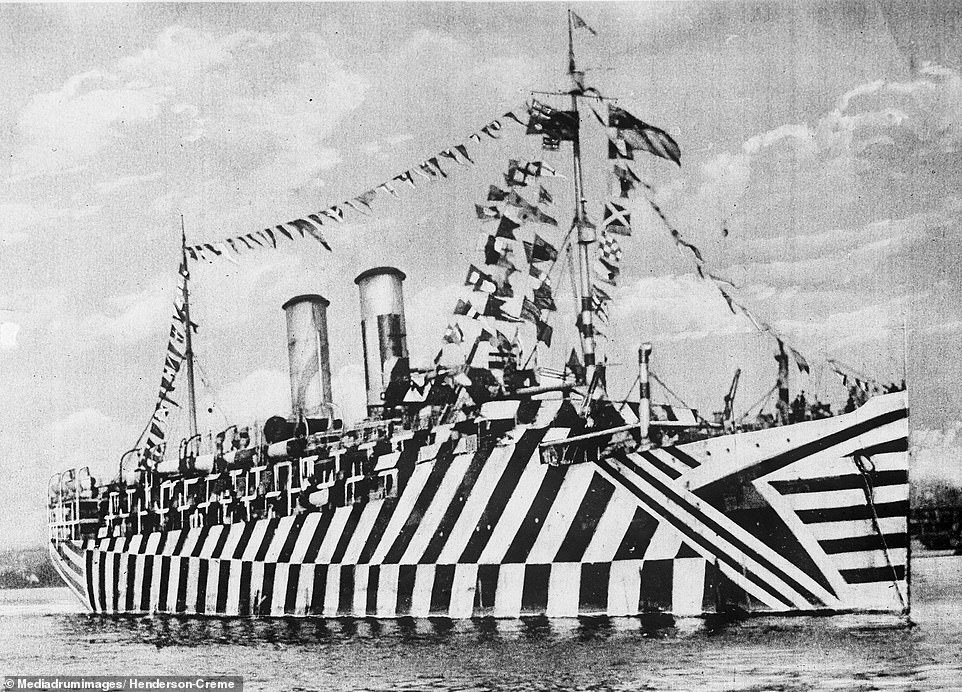 Many of the Orient Line’s ships were used during the two world wars. One of the vessels, Osterley, is pictured anchored in New York Harbour on Armistice Day, November 11, 1918. The Great War had ended and, to celebrate, Osterley was decked out with flags. During the war it had been given ‘razzle dazzle’ camouflage. The design was believed to make it difficult to estimate a target’s range, speed, and heading 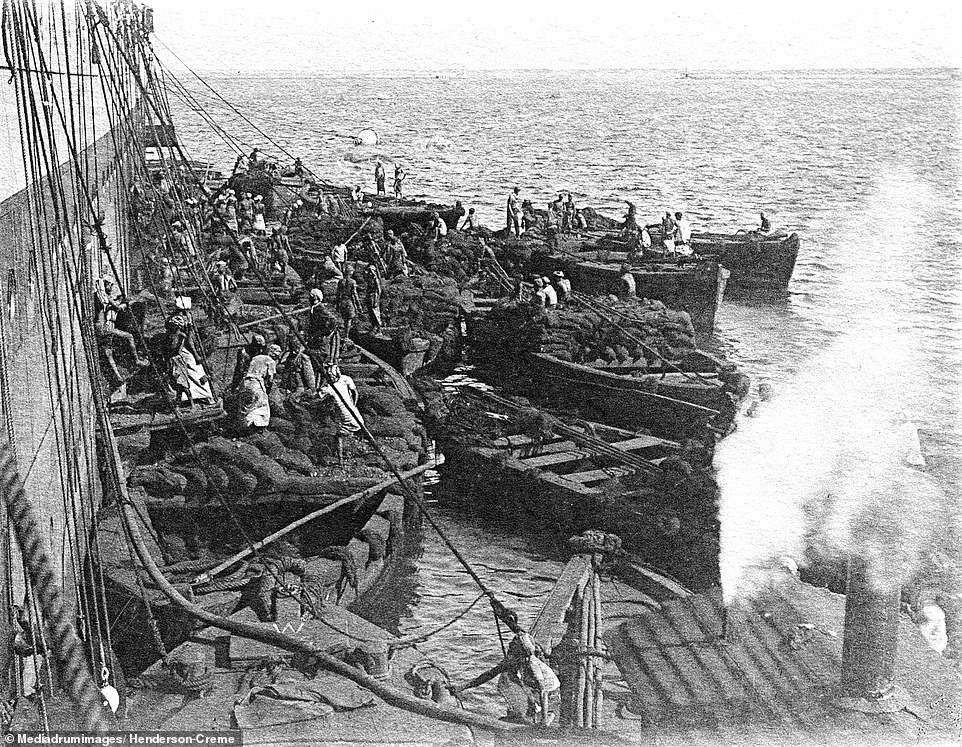 Until the early 1920s, all Orient Line ships were driven by coal-fired engines, which meant that the ship’s coal bunkers had to be frequently replenished during the voyage. It was well known as hot, dusty and dirty work. In this undated image, sacks of coal are hauled up and emptied down the coal chutes to the bunkers alongside the engine rooms of one of the Orient Line’s vessels 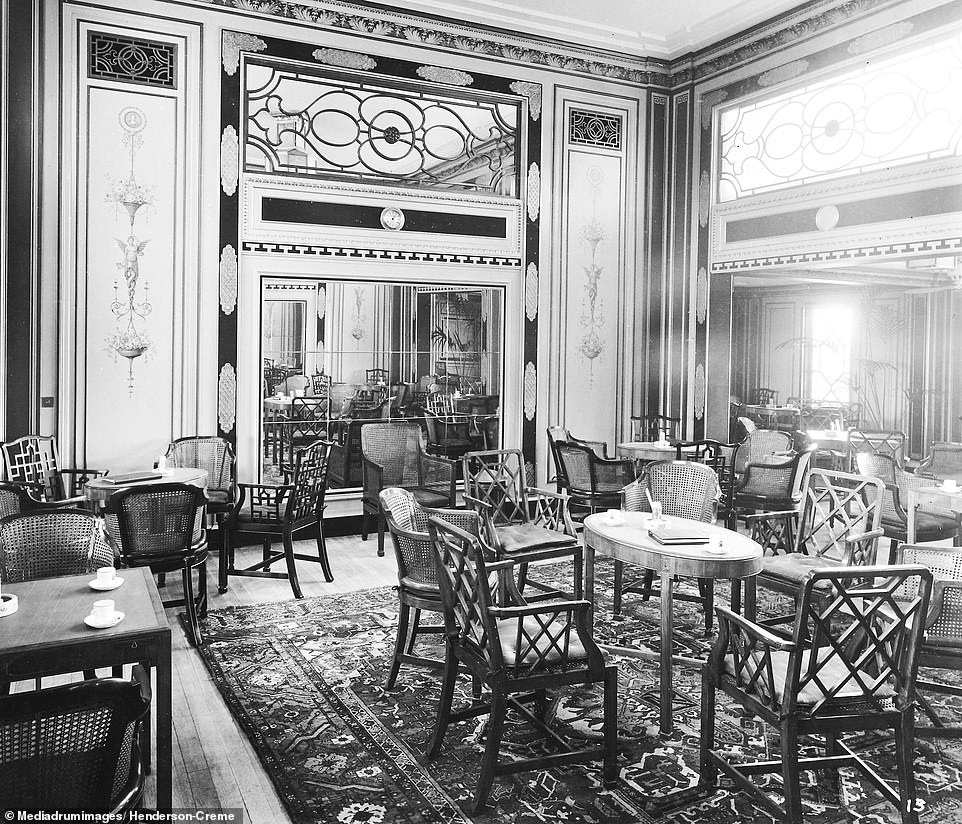 One of the fascinating images shows the elegance of the first class cafe on the Orient Line’s ship, Orford. The 20,000-ton vessel was built in the 1920s 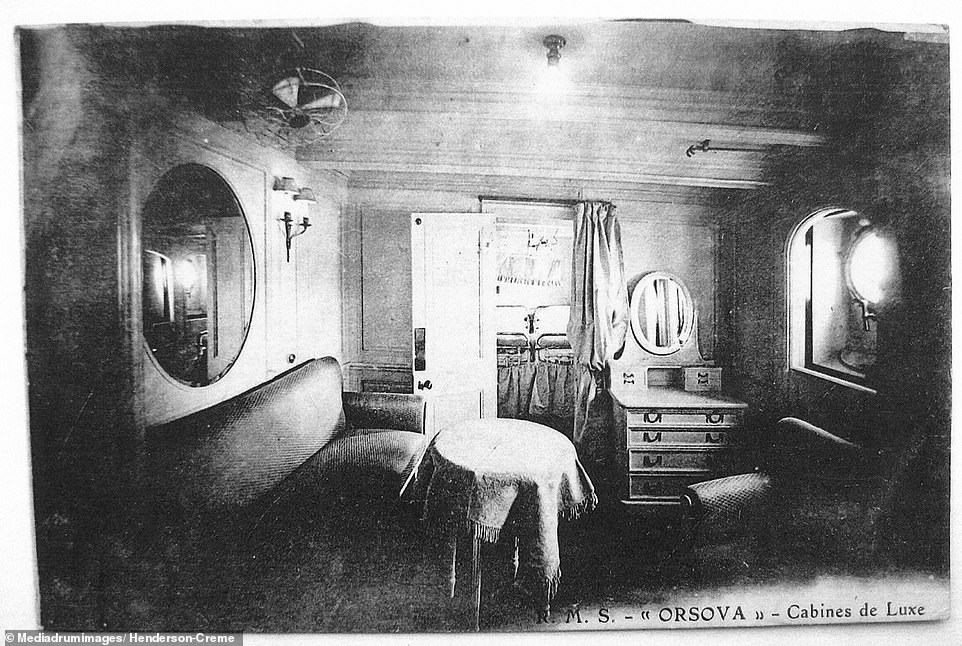 Luxury: Another image shows the sitting room and bathroom of a ‘cabine deluxe’ on one of RMS Orsova, launched in 1953. The cabin was fitted with a fan and ceiling hooks to hold open the porthole for extra  sea breeze during hot weather

Turkish police believe journalist was killed in Saudi...
'I really don't like water': Giants' Beckham struggles to stay hydrated, leading to cramping issues
Tesla FINALLY launches $35,000 base version of its Model 3 sedan two years after promising the price
Estranged wife of German industrialist cannot get divorced in London
Six top Radio 2 presenters get half-term week off work
'Ditch the fancy foam drizzles for REAL food,' urges Prue Leith
Lizzie Cundy's ex-lover splits from his fiancée for SECOND TIME and sets up home with her daughter
Grandmother, 94, who went missing from Indian village has been reunited with grandson after 40 YEARS