A rally car enthusiast who created a tiny trailer home in the back of a classic car left viewers of last night’s episode of Channel 4’s Amazing Spaces very impressed.

Mark, from Coventry, spent just over £2,000 revamping his 2.5 metre-long vintage trailer conversion, so that he and his daughters Kelly and Millie could go on family camping trips to .

The tiny mobile home, which was once an old Saab, now boasts a bijou living area and seating that converts into a double bed.

He’s also kitted it out with a flexible kitchenette, which is equipped with cupboards, a gas hob and even a mini sink.

‘That Saab is brilliant. That pull-out kitchen is just fab. I actually got a little emotional when he revealed it,’ penned one impressed viewer, while another enthused: ‘Love that pop out kitchen.’ 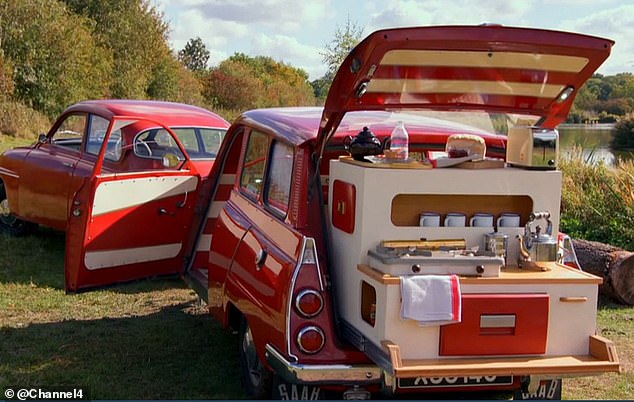 The trailer has been equipped with a flexible kitchenette which boasts cupboards, a mini sink and a gas hob – and viewers were left gobsmacked by the nifty transformation 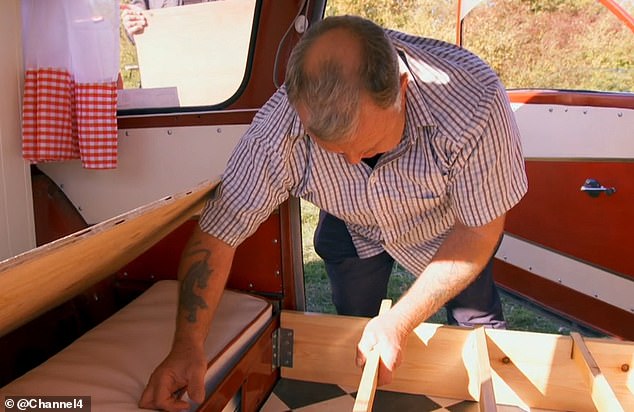 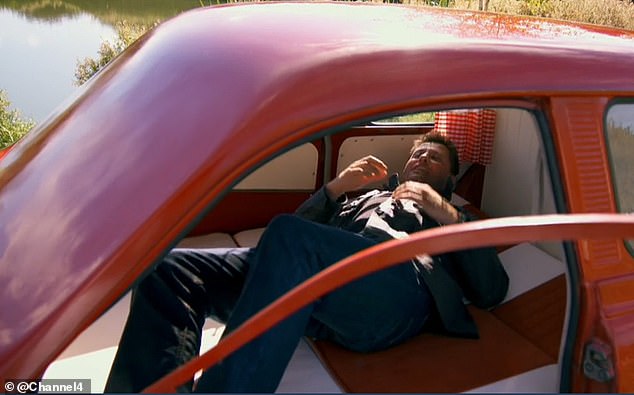 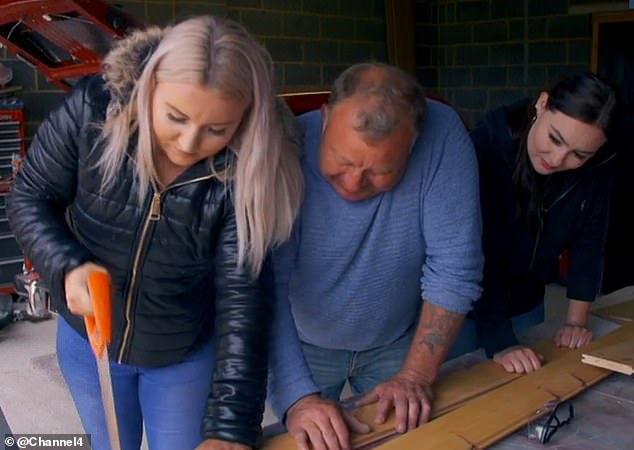 Not only does the petite vehicle now have ‘comfy’ sleeping quarters, but the clever father has even added extra storage in the well where the fuel tank used to be.

But it was the multi-tiered kitchenette – which magically slides out the back of the car and includes a 1960s camping stove and mini fridge, that left TV architect George Clarke and viewers equally impressed.

‘I absolutely love it,’ the presenter enthused on last night’s episode. ‘I love every single part of it. Not just the way you’ve designed its functionality which is brilliant but the look of it. It feels vintage. That is a fantastic piece of design.’

And viewers took to social media to commend Mark for his achievements.

‘Cute kitchenette,’ wrote one, while another commented: ‘That Saab is an ingenious use of space! Love the mini fridge.’

A third wrote: ‘I love the little camper which was transformed from the vintage automobile.’ 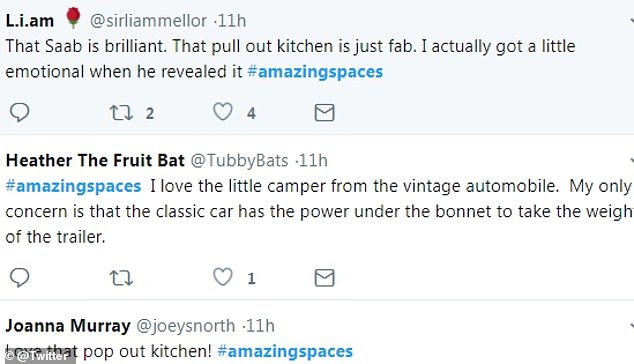 Meanwhile, others praised Mark for the project in general – and commented that it’s no easy feat turning the battered back end of a Saab into a luxury micro caravan for the relatively small sum of £2,875.

‘Excellent episode of Amazing Spaces tonight,’ said one viewer, while another added: ‘The Saab was superb! Nice to see the guy’s daughters getting involved in the build, too.’

While Mark’s restoration skills could be seen in the remodeling of the exterior, his attention to detail on the inside was also second to none.

‘If it wasn’t enough for Mark’s retro camper to be cool, stylish and timelessly classic, it’s also a marvel of micro engineering with its double sized bed consisting of two hinge wooden panels, pop in slats and the seat cushions for a mattress,’ commented George. 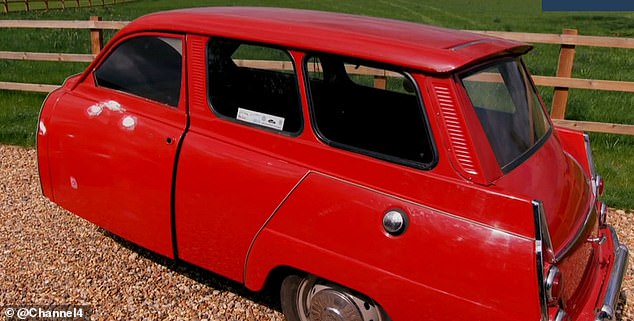 The innovative father was looking for interior for his Saab when he saw and advert and came across a car which was the same make, model and colour – but was missing the front. Worried it would be made useless and turned into scrap, Mark decided to save it and covert it into a trailer 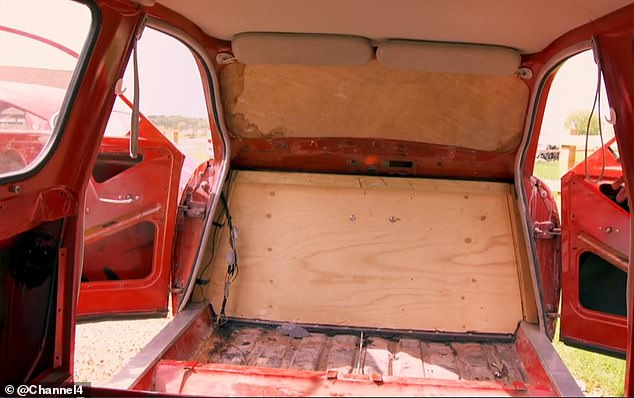 Mark couldn’t bare to see the old classic Saab turned into scrap, so he took it upon himself to convert what was once deemed a ‘useless’ classic car, into something remarkable

And to keep the family even more comfortable on their travels, the design included a number plate which hides some plug sockets and a super smart solar panel with an ingenious hidden plug – to help charge the lights and fridge.

Mark also revealed the orange and white coloured theme inside was a deliberate choice.

‘The colours take me back to my childhood in the early Sixties, playing in the arcades on holiday by the seaside,’ he said. ‘Everything was hand-painted in those days in oldy worldy colours.’

But the idea for the initial transformation came about by pure luck when Mark was looking for parts for his cherished collectible 1962 Saab.

He discovered an almost identical model hidden away in a barn that was the same year, model and colour as his beloved vintage car – but it was missing the front. 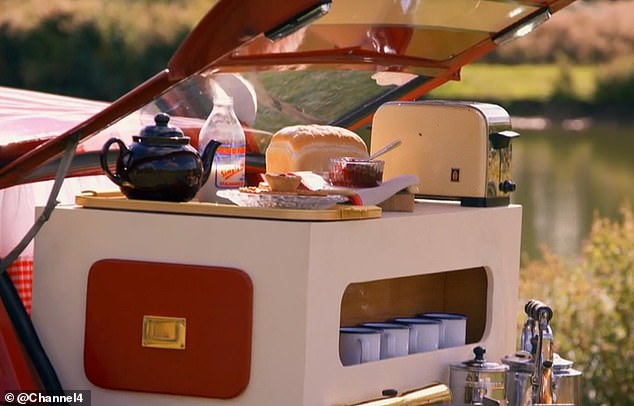 In addition to the impressive interior, the flexible kitchenette is multi-tiered and is well equipped with every item necessary for a camping trip 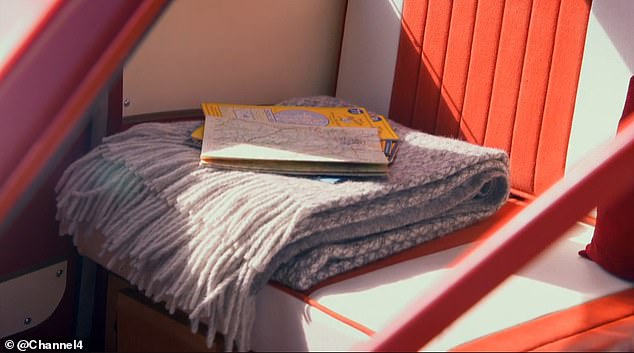 ‘I needed some bits for my Saab, saw an advert for the interior got there and thought if they sell any more parts of this car, it’s going to be useless, will go in the crusher and will be baked bean tins in a supermarket somewhere,’ Mark explained on last night’s episode. ‘So I had to save it.’

After adding a toe bar to the front end, he decided it would make the perfect tiny getaway for the Le Mont 24-hour race for the family in France – and he wasn’t wrong.

‘Looking at immaculately restored vehicle it’s hard to imagine just four months ago it was languishing in a barn on the way to the scrapyard,’ added the TV architect. 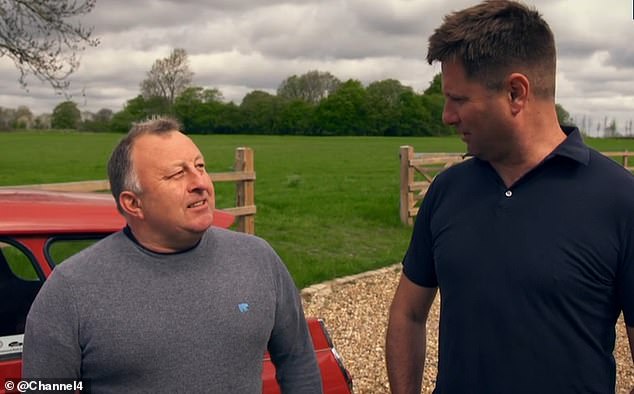 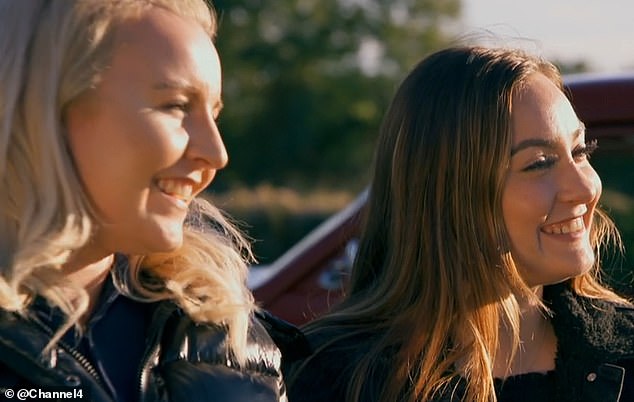