A grandfather who fought to get a tree felled for 30 years is left devastated after it crashed into his house during Storm Erik.

The vicious Storm Erik battered the UK on Friday and Saturday, with gales of up to 80 mph causing widespread travel disruption, with three people reported dead.

Melvin Toon. 68, says he has made ‘countless’ calls to Nottingham City Council about the tree since moving into the property in 1985.

He said the tree – which was around 25ft from his three-bedroom, semi-detached home in Bulwell, Nottingham – had always shaken heavily in the wind. 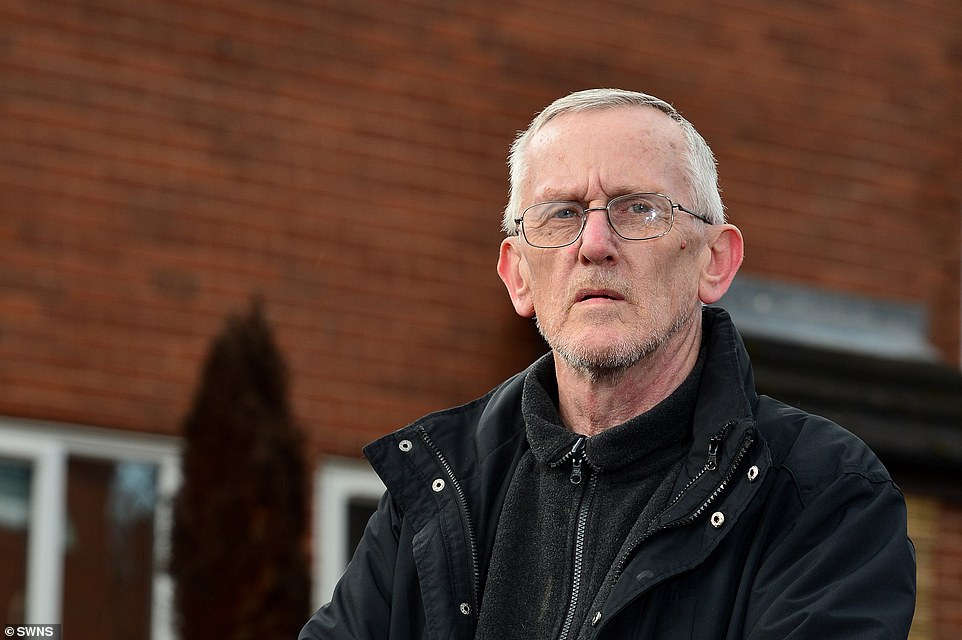 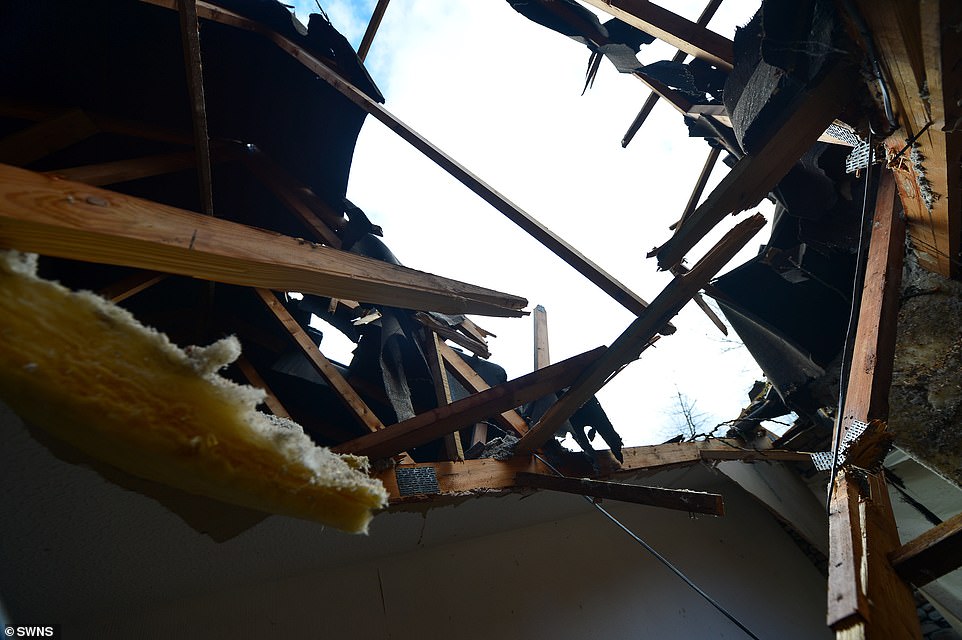 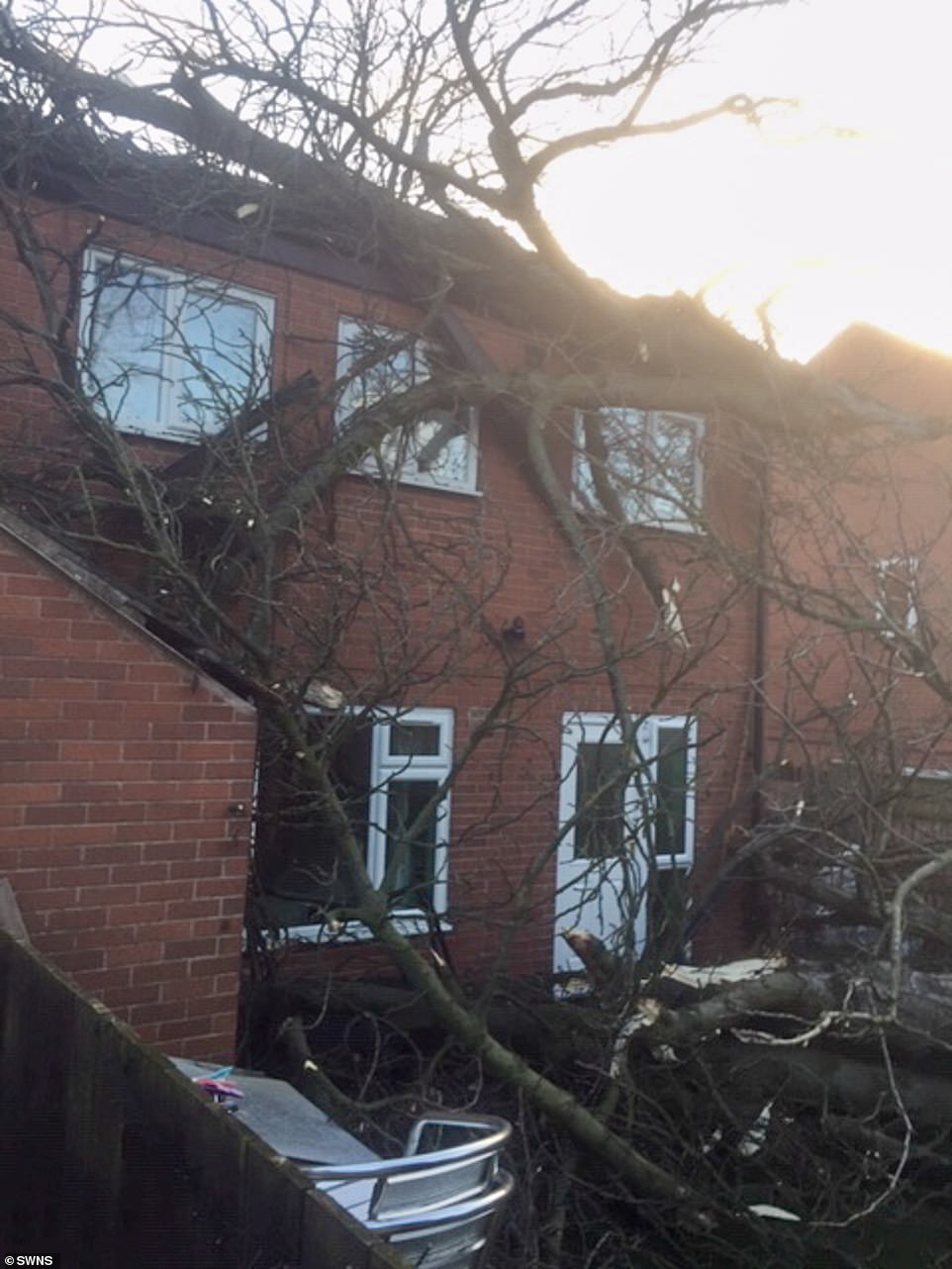 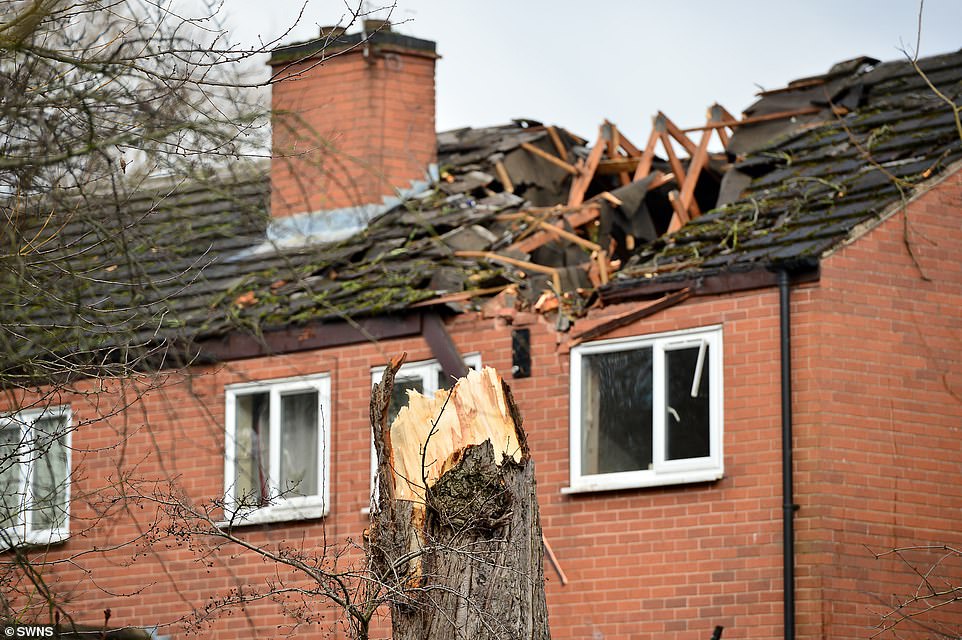 He also believed it did not have enough space for roots to make it stable, and feared it would come down one day.

The great-grandfather was told by the council it was protected under a preservation order – but Mr Toon said it was only trimmed once every ten years.

During Storm Erik winds of 50mph brought the chestnut tree down onto the house at 6.45am on February 9 – causing an estimated £20,000 of damage.

The 40ft tree damaged the roof, loft and the middle room at the back of the house.

Many of Mr Toon’s belongings were covered in dirt from the loft, and have since become damp from the hole in the roof.

Forecasters have said there are expected to be showers in the south today following the downpour overnight, but as the day moves on the rain will be replaced by sunny spells.

will see a dry start but then see strong winds and heavy rain, and the south-east will remain damp throughout the day and into overnight.

The heavy rain will then edge into Wales and the north-east England overnight, and there could even be a chance of snow in high areas in the south overnight. 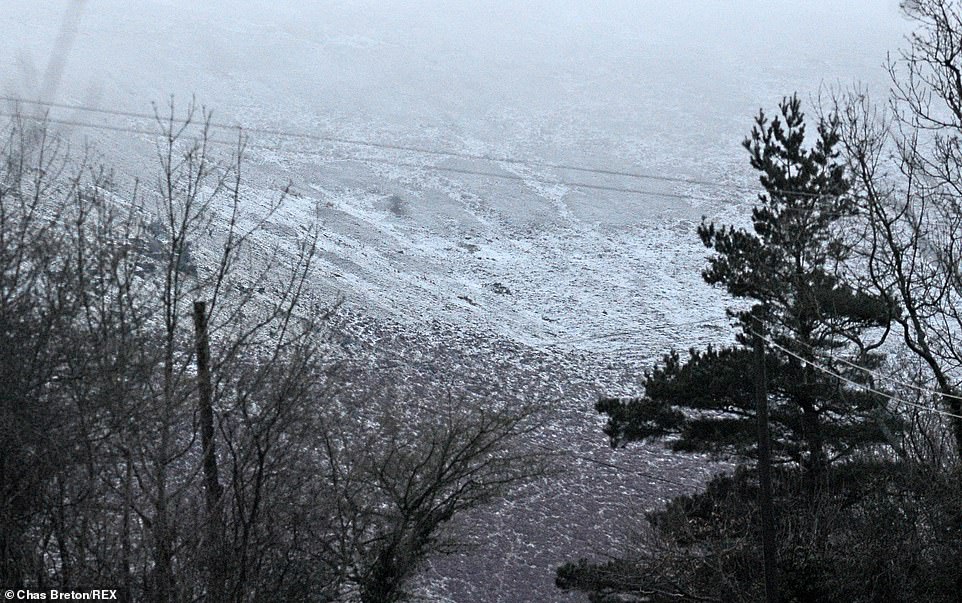 Cold conditions overnight in the hills above Longtown in Herefordshire. There could be further snow overnight, as many areas will be hit with rain and strong winds 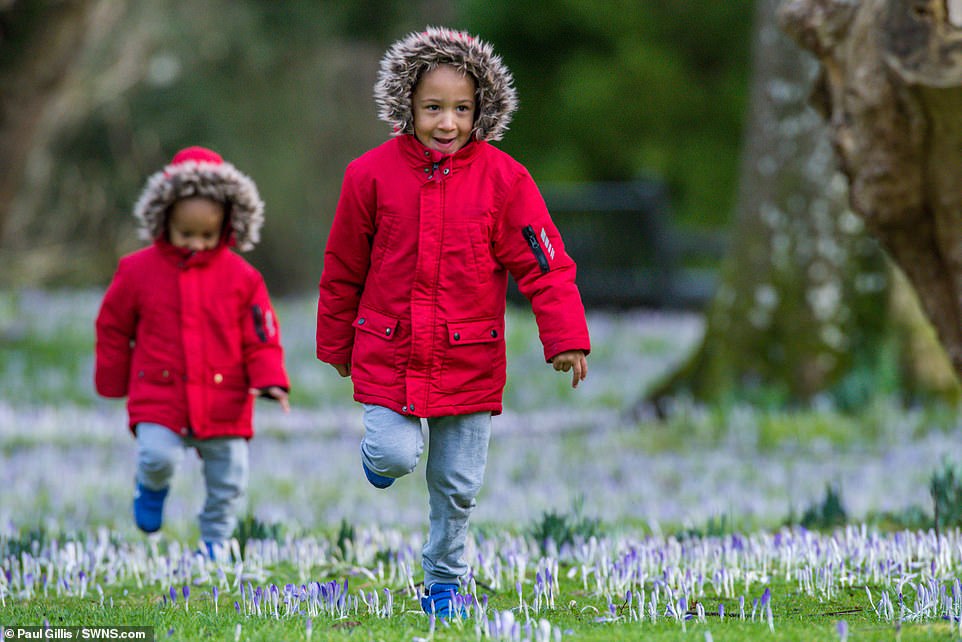 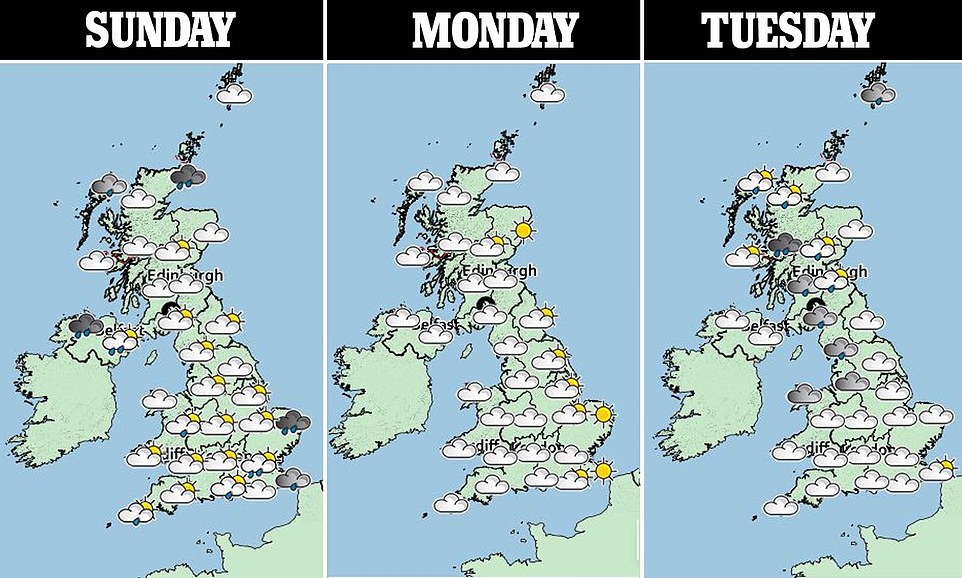 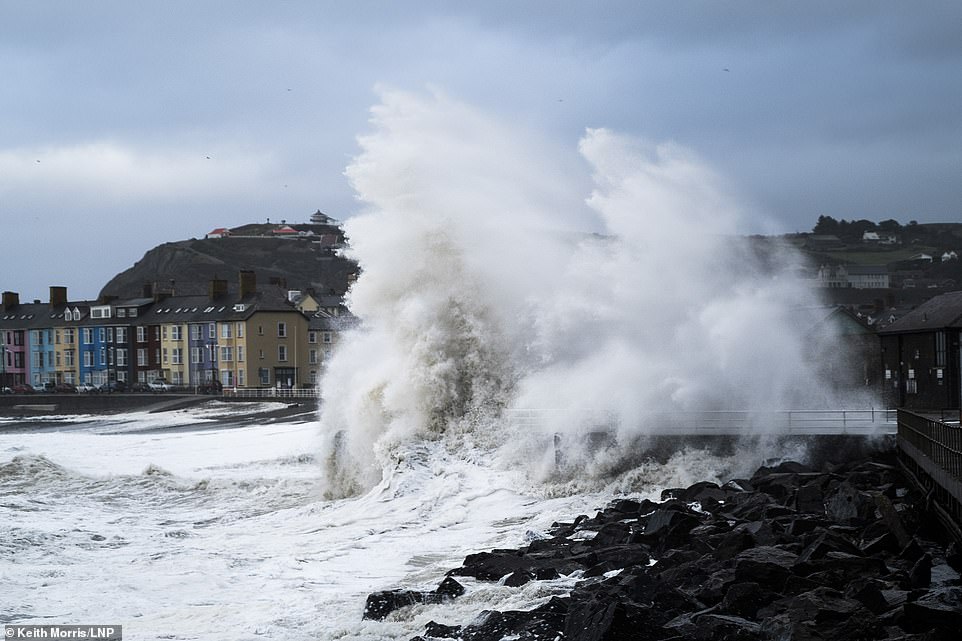 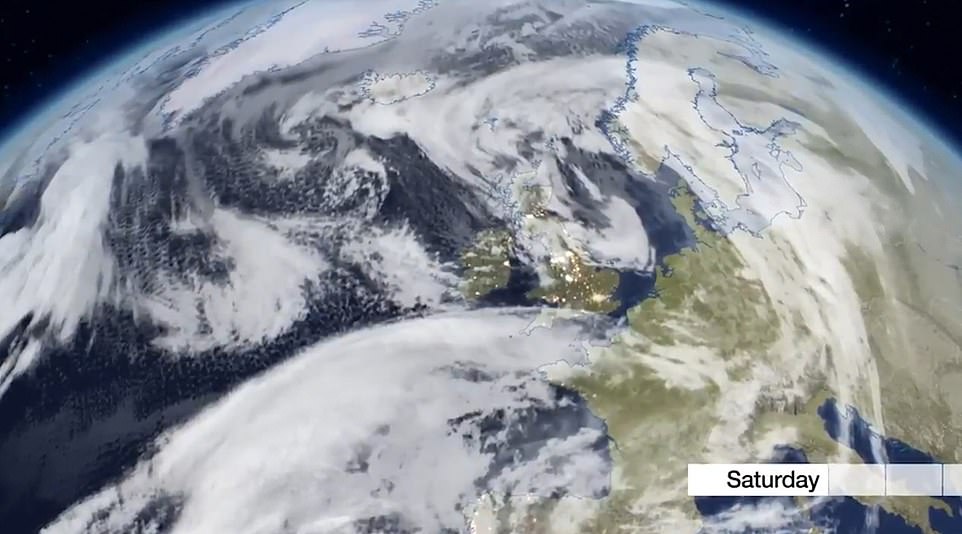 Meteorologist Simon Partridge from the Met Office, said: ‘A bit of a mixed bag this Sunday morning.

‘Sunny spells for many of us, also a mixture of rain and showers in other parts of the UK.

‘And it will be a touch colder than it has been on recent mornings.

‘A clear bright start for Northern Ireland and northern England, we do have showers making their way across Wales and the rain from last night is covering up much of south-eastern England, so a pretty grey and damp start for many of us here. 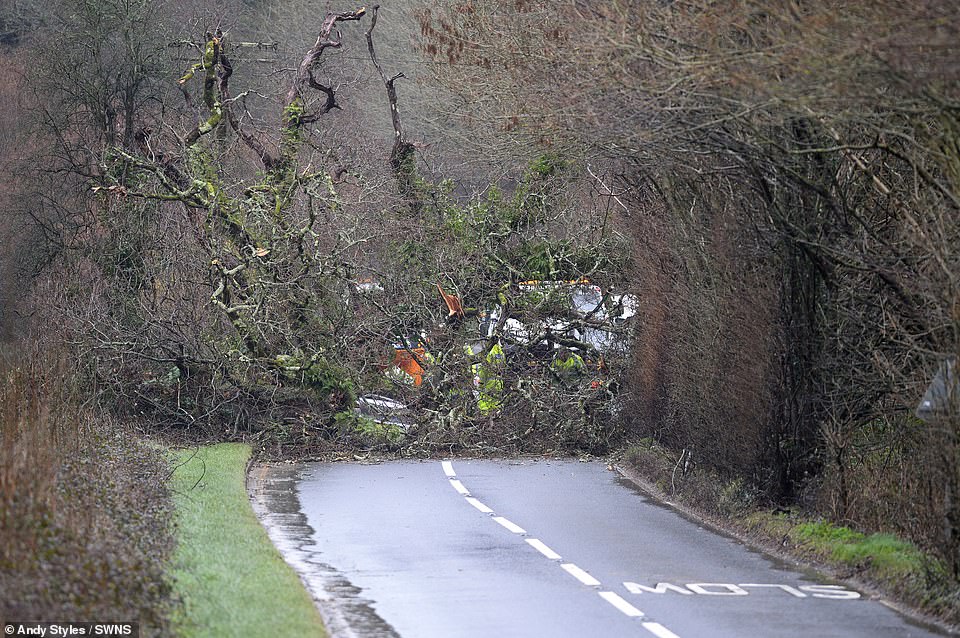 A motorist has died after Storm Erik ripped a giant tree from the earth and sent it flying into the road in Devon (pictured), as meteorologists issued ‘danger to life’ warnings due amid 80mph winds and heavy rain on Saturday 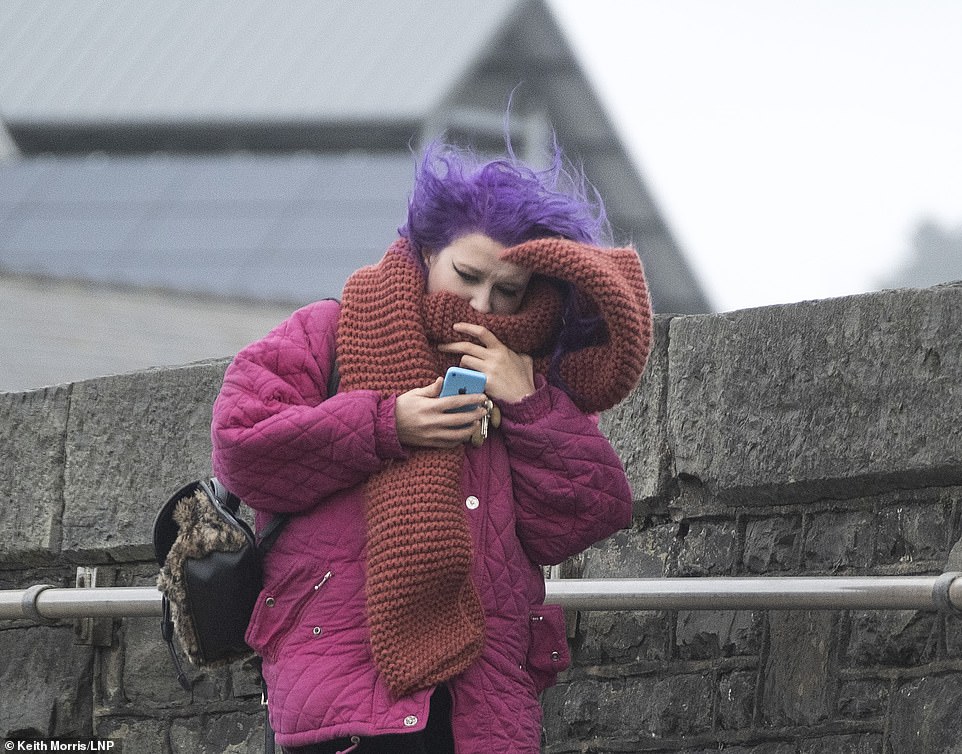 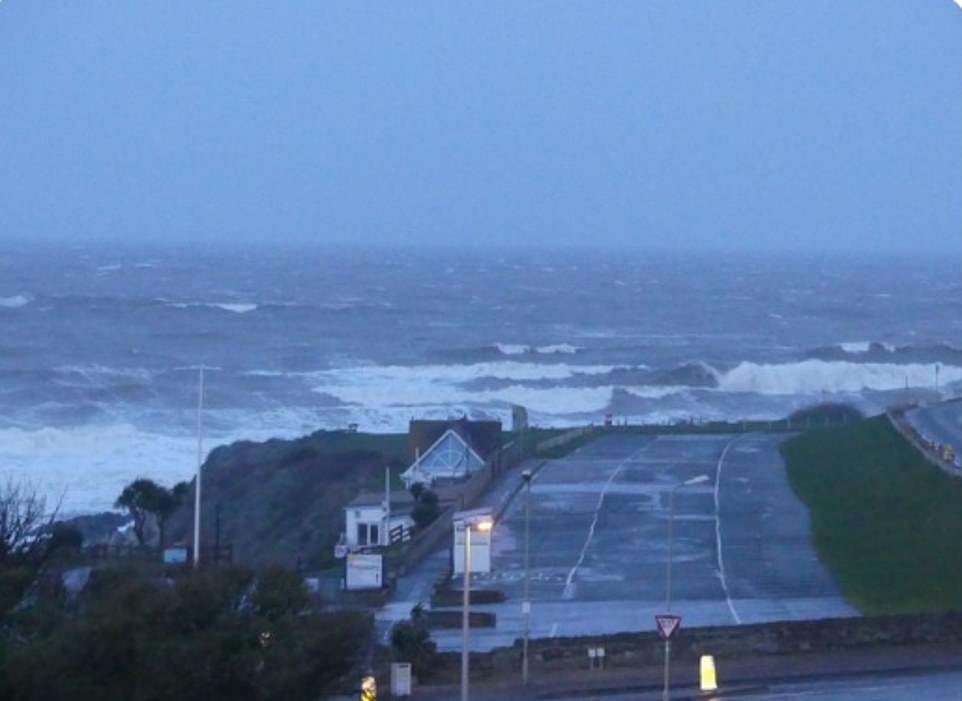 This was the scene in Woolacombe, North Devon on Saturday morning as strong winds continued to batter the coast

‘Through the day basically all of this weather is going to move its way south and eastwards, with the rain in the south gradually clearing its way eastwards, although the southeast corner will hold on to a rather grey and damp day.

‘Elsewhere lots of sunshine on offer, a few showers across parts of England and Wales, but these will be few and far between.

‘And then this area of low pressure starts to make its way across Northern Ireland as we head through the afternoon.

‘This will bring in strong to gale force winds and also some locally heavy rain at times as well, now that continues to make its way further south-east overnight.

‘Through the evening period it starts to edge its way into parts of north-west Wales and north-west England.

‘At the hills here, mainly over 300 to 400 metres it could turn to snow for a time as well, but for most of us it will be a little bit wetter and windier as it makes its way through.’

The improved weather will be a relief for Britons in various parts of the UK who suffered the wrath of Storm Erik on Friday and Saturday.

On Saturday a kitesurfer died amid strong winds in an incident on the Saunton Sands beach in north Devon.

On Friday morning a 50-year-old man died on the A384 in Buckfastleigh, Devon, and in Wales a van driver was killed after he collided with a fallen tree on the B4306 between Pontyberem and Llannon in west Wales.

The Met Office issued a yellow weather warning for strong winds on Saturday covering much of Wales, central and northern England and southern Scotland.

A separate yellow weather warning for heavy rain was issued for northern Scotland on Saturday.

The Met Office said wind speeds of 75mph were recorded in Powys, Wales, and 74mph in Dumfries and Galloway, Scotland, adding that across the rest of the country gusts between 40 and 50mph were typical.

Georgie Parker admits she ‘picked and chose’ gender characteristics as a young woman
Owen Farrell and Co stave off plucky Glasgow in Champions Cup
Philip rides again! Duke of Edinburgh, 97, is back behind the wheel
May meets Northern Ireland's parties in scramble to find a way to break Brexit deadlock
How London Fashion Week outfit is made entirely from nettles from Prince Charles' Highgrove estate
Ambassador to the EU will DEFY the White House and talk to Congress about Ukraine scandal
Bulgaria vs England - Euro 2020 qualifier: Live score and updates
Woman who 'never sunbathed' shares a passionate warning after being diagnosed with stage 3 melanoma