London’s latest murder victim had his ‘throat slit with a huge knife ‘ outside a 24 hour off licence, according to a shocked local business boss.

The victim, believed to be aged in his 30s, was pronounced dead at the scene in Lordship Lane in well-heeled East Dulwich shortly after 3am on Sunday.

No arrests have been made and enquiries into what happened are ongoing, the Metropolitan Police said.

This morning his body still appeared  to be inside the police cordon as a forensic tent could be seen outside an off licence on the main road. 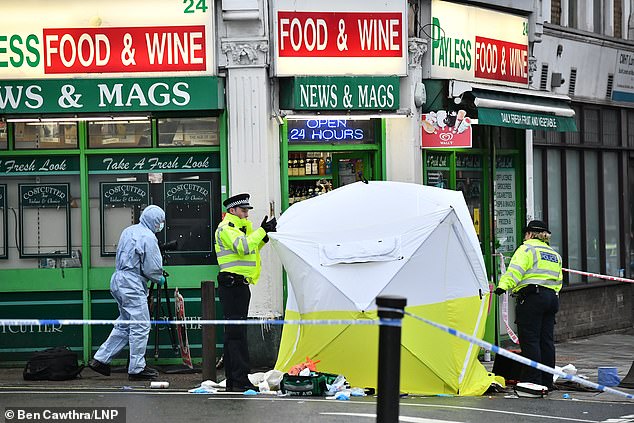 The scene on Lordship Lane in East Dulwich, south London where a man, believed to be in his 30’s, was stabbed to death

A local business owner said staff in the store – which is still behind police cordon – tried to stop the attack, but it was too late.

The man, who owns another shop that is just a few doors up from where the attack happened, said: ‘The guys from the off licence saw it.

‘We spoke to them briefly this morning because when we saw the police we were worried something had happened to them. 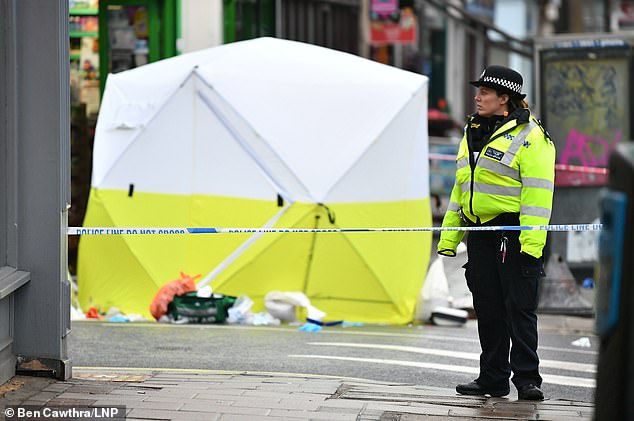 ‘They said they heard something outside and came out to stop it. But they couldn’t do anything.

‘The knife was huge, bigger than a kitchen knife. He slashes him across the neck. I don’t think they were customers.’

He added: ‘I think the guys from the off licence are the ones who called the ambulance.

‘As it’s open late they do get a lot of drunk people in there, but I haven’t heard of them having any problems.’ 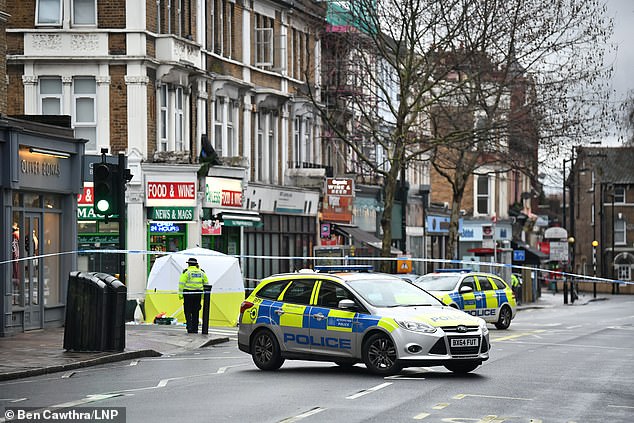 MP for the area, Helen Hayes tweeted that the knife crime ‘has to stop’. The scene is pictured

The men from the off licence are believed to still be inside the building, which is behind a police cordon.

Formal identification and a post-mortem examination will take place in due course, the force added.

Police have appealed for information.

MP for the area, Helen Hayes tweeted that the knife crime ‘has to stop’.

She said: ‘Appalled to learn of a fatal stabbing on Lordship Lane during the night. Another family now devastated due to knife crime. This has to stop.’

The news follows three other separate events in London, a stabbing in Neasden last night and a shooting in Isleworth also last night. The earliest of the incidents was a stabbing during a fight in Hayes, west London.

The incident, at around 3.47pm on Saturday, saw police arrest four males on suspicion of the attempted murder of a 16-year-old who was found with stab wounds.

They are a 15-year-old, a 16-year-old and two 18-year-old men. All four were taken to west London police stations where they remain in custody. 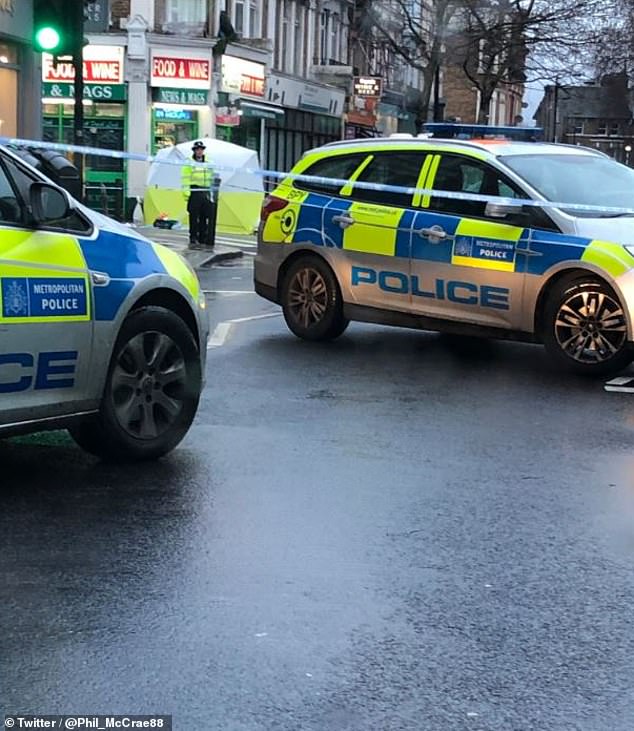 His injuries are not believed to be life threaten. In both other cases the victims are in critical conditions in hospital.

The stabbing in Neasden, northwest London, saw a 23-year-old taken to a central London hospital after a man and a woman were arrested after the incident which took place at around 10.45pm.

The man, 29, was arrested at the scene on suspicion of attempted murder. He remains in custody.

He was with a 24-year-old woman who was also arrested. She was arrested on suspicion of assisting an offender – she also remains in custody.

In the other event just hours before at around 7.15pm on Saturday night, in Isleworth, Hounslow, west London, a teenage boy was rushed to hospital following a shooting.

A Scotland Yard spokesman said: ‘Police were called by paramedics to London Road, Isleworth, at 7.17pm on Saturday to reports of an injured male.

‘Officers attended. At the scene a male, 17 or 18 years old, was receiving treatment from medics for gunshot wounds.

They described his condition as critical. 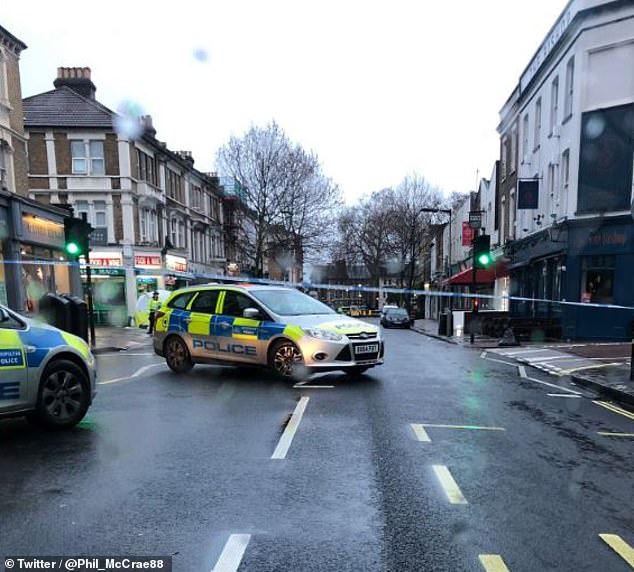 The police cordon extended across the street, forcing business closures and bus diversions 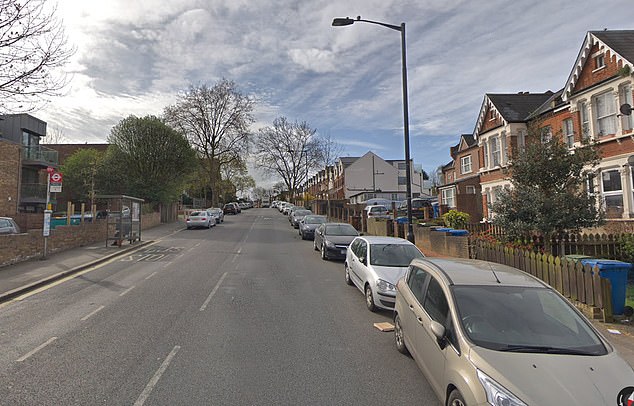 A man in his 30s has died after being stabbed in Lordship Lane, pictured, in East Dulwich shortly after 3am on Sunday

On Thursday the Office for National Statistics revealed that the number of fatal stabbings is now at the highest level since records began in 1946.

Some 285 people were stabbed to death in the year ending March 2018, with attacks ‘most pronounced’ in young men.

Highlighting a worrying increase in violence plaguing Britain, there were 726 killings recorded overall – 20 more than the previous year.

The homicide figures are more pronounced when excluding mass murders such as the London Bridge, Westminster and Manchester terror attacks, which claimed the lives of 35 innocent victims in 2017. 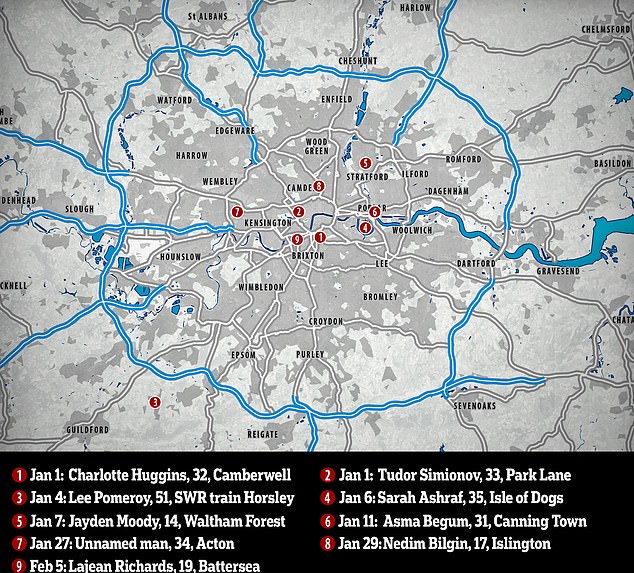 Already this year at least nine people have been murdered in the capital including Lejean Richards, 19, who was stabbed near Prince George’s school earlier this week 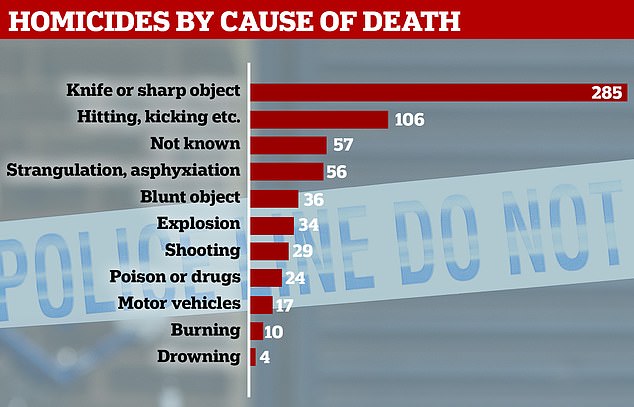 Stats released on Thursday show that stabbings are by far the most common cause of death in homicide cases, nearly three times the second most common, which is beating

So far in 2019 at least nine people have been murdered in the capital including Lejean Richards, 19, who was stabbed to death near Prince George’s school.

His mother Lavern Joseph said: ‘Lejean was a loving son and brother, a young man determined to turn his life around.’

Pretty in INK! Skin-credible art and extreme body modifications on show at London Tattoo Convention
O´Neill: Hendrick set bar too high at Euros
Gary Lineker discusses his son George's childhood cancer battle
Mother's ex taught their son, one, to call her a 'slag' during years of harrowing abuse
NHS stroke patients could have to travel 45 minutes to their nearest hospital
Gut bacteria does cause depression
Ex-husband Ian Clowes convicted of arson after blowing up Poole house with him and ex-wife in it
Baby born with webbed fingers and toes will have life-changing surgery