The shocking allegations made against billionaire businessman Sir Philip Green by five former employees have been revealed for the first time.

Sir Philip originally obtained a court injunction preventing the publication of the claims, before dropping it earlier today.

Now, the full extent of the allegations can be revealed, included how he groped a senior female executive and called her a ‘naughty girl’,  before paying her more than £1 million in hush money.

The Arcadia boss is alleged to have paid out millions in settlements with staff members. 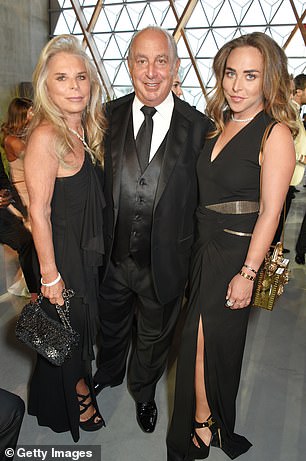 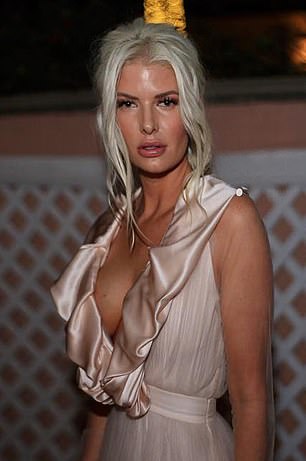 Sir Philip Green, pictured with his wife Tina and daughter Chloe, has formally dropped his legal action over a court injunction. Aside from the injunction cases, former Topshop boss Auna Irvine (right) has accused Green of inappropriate behaviour

The embattled Topshop billionaire is alleged to have kissed the female executive’s face, slapped her bottom and made comments about her weight several times, in front of other people.

The reported the claims after the businessman dropped legal action against the newspaper.

The retail tycoon also allegedly dragged a woman around in a headlock and smashed a male employee’s mobile phone, the newspaper said.

And the paper reported he was told not to come any closer by a woman whose face he is said to have grabbed, allegedly dragged another senior female staff member around in a headlock and allegedly smashed a male staff member’s mobile phone in an aggressive dressing down.

He reportedly mocked a black male employee’s dreadlocks and told him he was ‘still throwing spears in the jungle’, before assuming he smoked cannabis.

Green was also told not to come any closer by a woman whose face he is said to have grabbed.

Sir Philip has categorically denied the allegations, insisting he never meant to cause offence.

In all five cases, the employees had agreed to keep the details of their complaints confidential under NDAs. 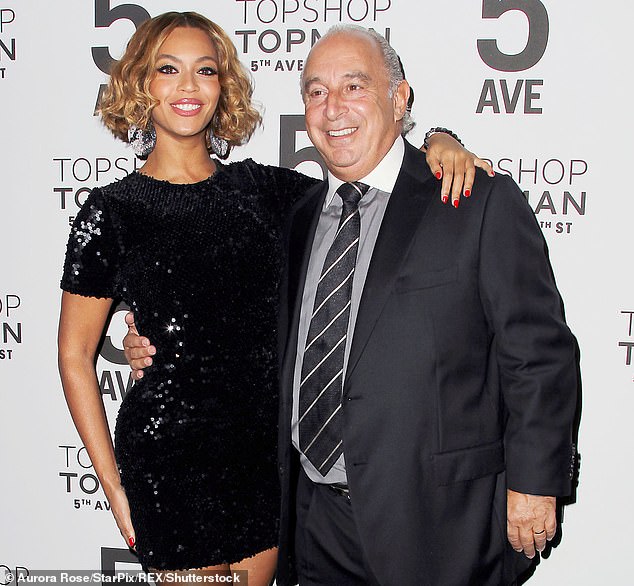 Sir Philip has spent a career attending glamorous parties with top celebrities. He is pictured with Beyonce in 2014, but the singer cut ties with him after the allegations emerged

Earlier on Friday he accused the paper of ‘pursuing a vendetta’ against him and his staff and said former employees whose allegations were investigated by the newspaper were under ‘ongoing obligations’ to honour non-disclosure agreements (NDAs).

A judge today allowed Green to end proceedings against the paper after he admitted the injunction barring them from printing the claims had become ‘pointless’ since Labour peer Lord Hain unmasked him in Parliament as the man behind the case.

Green fired a shot across the bows of anyone preparing to publish new details of the former-workers’ claims however, in a bullish statement.

He and the board of the Arcadia Group said the former employees who signed the the non-disclosure agreements were under ‘ongoing obligations’ to honour them.

Their statement said: ‘The Telegraph and its owners must now decide whether to do the decent thing and respect the NDAs. 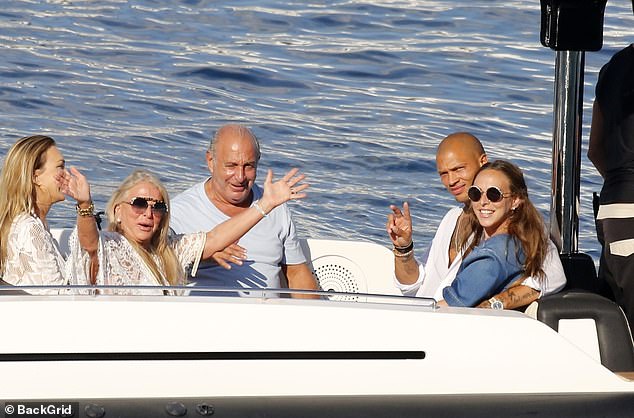 Green has welcomed his daughter’s boyfriend, Jeremy Meeks, a former criminal turn model who was dubbed ‘the hot felon’, to share the family’s luxury lifestyle. They are pictured Mykonos

‘If not, they will expose their sources to potential further legal actions and significant losses. Their fate is now in the Telegraph’s hands.’

The statement opens the door to potential further legal action if details of the claims are published.

In an article today, The Telegraph claimed it plans to publish details of the claims made against Green ‘in the coming days’.

Sir Philip has always strenuously denied the allegations at the centre of the legal whirlwind.

Among those who have accused Green is Auna Irvine, who headed one of the billionaire’s flagship US stores and said Green would grab her waist, slap her bottom and make inappropriate comments about her breasts.

Miss Irvine became the first woman to publicly accuse Sir Philip of sexual harassment in November last year, when she told the Telegraph she felt ‘demeaned and devalued’ by his actions.

Her claims against the businessman were published because she lives in the US and is not one of those involved in today’s court case.

At the time of her claims, Green’s law firm, Schillings, said Miss Irvine had been fired for giving clothing away to her boyfriend and putting it through the checkout as damaged.

In court today, Sir Philip’s lawyers said the decision to drop the case was prompted by Lord Hain’s identification of Sir Philip in the House of Lords in October last year.

Lord Hain’s disclosure came a day after the Telegraph ran a front-page story saying it was prevented from naming a ‘mystery businessman’, with the headline ‘The British #MeToo scandal which cannot be revealed’.

Summarising the Telegraph’s case in his ruling, Mr Justice Warby said: ‘His conduct was said to be ‘gross and unlawful’, involving ‘habitual behaviour over a substantial period by an extremely wealthy and powerful man abusing his position’.’

The newspaper reported that Sir Philip is facing a legal bill of £3 million in relation to the case.

In August last year, another judge Mr Justice Haddon-Cave refused to gag the newspaper, but a challenge was mounted by Sir Philip – then identified in court papers as ‘ABC’ – and the two companies. 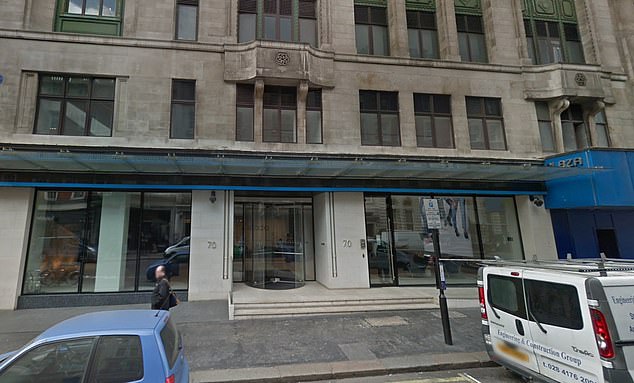 Arcadia, based in central London, owns the Topshop, Dorothy Perkins and Burton chains

Court of Appeal judges temporarily barred the newspaper from identifying the tycoon or revealing ‘confidential information’ relating to allegations of misconduct made against him by five employees.

But former Cabinet minister Lord Hain used parliamentary privilege to name Sir Philip in the House of Lords two days after the court’s ruling in October.

In a statement after Friday’s ruling, Lord Hain said: ‘The government must reform the law.

‘It is entirely wrong to use NDAs to conceal abuse of victims by powerful or rich individuals.

‘That is deploying gagging orders to enforce injustice and the abuse of human rights of ordinary citizens who don’t have the money to fight back.’

Mr Justice Warby continued an existing order banning the identity of the former employees from being revealed.

He said none of the five wanted any information about their cases disclosed in conjunction with their name, four did not want it published at all, while two supported Sir Philip’s case.

Lord Hain, who used Parliamentary privilege to name Sir Philip as the businessman behind the injunction in October, said the law on non-disclosure agreements should be changed.

In an interview with the BBC, he also said he had ‘no regrets at all’ about identifying the Topshop owner.

He said: ‘It was the correct thing to do and, in a way, the fact that he has discontinued this action … is a vindication of what I did.

‘What I think this now gives rise to … is whether the law should be reviewed, as I think it should be.’ 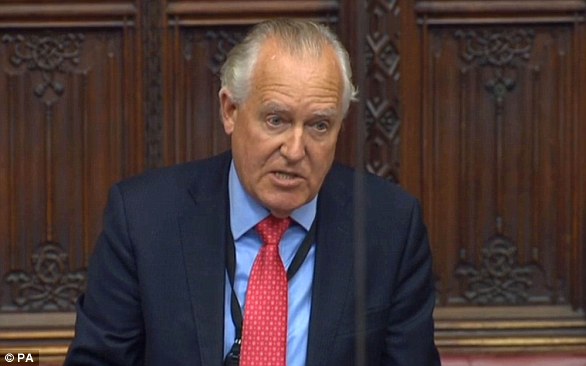 Lord Hain, pictured when he named Philip Green in the House of Lords, has called for the rules on controversial non-disclosure orders to be changed

Lord Hain said that NDAs were legitimately used to protect commercially-sensitive information when someone left an employer, but the use of them to ‘conceal abuse’ was wrong.

He added: ‘The law has got to be reformed to stop that continuing. ‘

In a statement, Lord Hain said: ‘The government must reform the law.

‘Commercial non-disclosure agreements are legitimate in commercial transactions, for example when Jose Mourinho was sacked by Manchester United he agreed not to tell his side in return for a big pay-off.

‘It is entirely wrong to use NDAs to conceal abuse of victims by powerful or rich individuals.

‘That is deploying gagging orders to enforce injustice and the abuse of human rights of ordinary citizens who don’t have the money to fight back.’

G20 trade ministers say need for WTO reform 'urgent'
Jamie Oliver's restaurant chain prepares to go into administration putting 1,300 jobs at risk
Heatwave kill count hits FIVE! Man, 63, becomes latest swimmer to die in hot weather
Geopolitical analyst Phil Diacon details why the Strait of Hormuz is so chaotic and volatile
Grace Millane suspect tells police he left her after date, but he actually took her to his hotel
Queen talks of grandson Archie in Christmas Speech
Lockdown horror as boy, 11, is shot in East London
Trump tells governors 'most of you are weak' on violent protesters and says: 'You have to dominate'