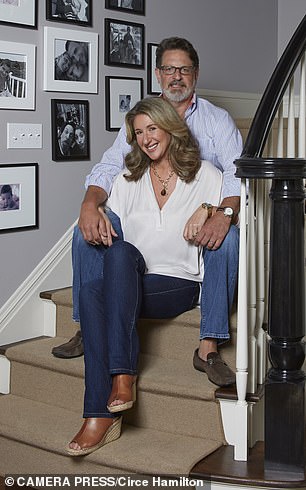 True love was something I always believed in — I just never thought it would happen to me. The first time I got married, I did so for all the wrong reasons (I wanted children; he was a sensible choice; he would be a good husband and father; I’d make it work) and when it ended seven years later, I thought I would never marry again.

I was 37 when we split up, with four children under the age of six. My body told the story of my pregnancies, with bulges and pouches, scars and veins. Who would want me now, I remember thinking, examining myself in the mirror. How could I ever expose this ravaged body to anyone other than the man who had just left?

Not that I planned to jump into bed with anyone. I found myself huddling on the sofa, shell-shocked, with no idea how my life had unfolded like this.

I wasn’t good at relationships, I decided. It would be far easier for me to be on my own. I certainly couldn’t envisage dating, spending all that time getting to know someone again. I couldn’t imagine repeating the rollercoaster of emotions I had gone through in my 20s before I met my husband.

Those relationships always seemed to follow the same pattern: I was confident and sure of myself until the minute I felt secure in a relationship, when I would suddenly turn into a mass of insecurities. One brush with an unfaithful boyfriend left me convinced that it would happen again. If they didn’t call when they said they would, I was sure they were with someone else.

Unsurprisingly, my neediness sent them running, leaving me doubting I would ever find happiness.

When I met the man who would become my husband, it was the first time someone seemed to like me more than I liked him. He is American, was confident and smitten. 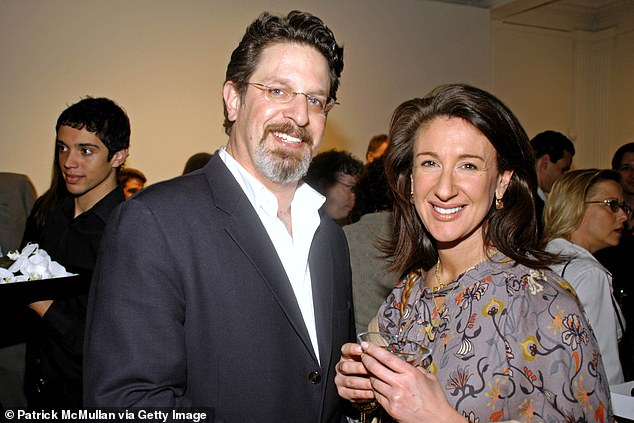 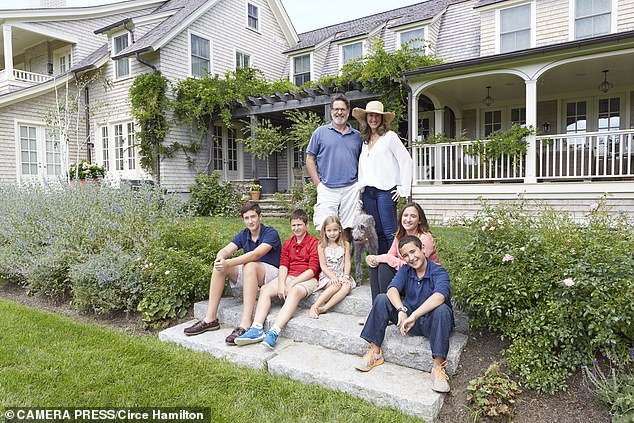 Jane was 37 when she split up with her first husband, with four children under the age of six

We had moved from my home town of London and were living in Connecticut, in an old farmhouse in the countryside. It had always been my dream to own a rambling old farm in the middle of nowhere.

But one day, after seven years of us growing apart, he moved out. I knew I had to move back to civilisation.

In April 2006, I answered an ad for a tiny beach cottage in the coastal Connecticut town where I had been living before the farm in the country. I had close friends there, a support system. I could be on my own without dying of loneliness.

My landlord, Ian, was tall, with large hands and a greying beard. He had twinkly blue eyes and a warmth and kindness that instantly made me feel safe. The beach cottage was far too small for my four children and me, but a voice whispered that I was supposed to be there.

A single parent too, Ian lived next door on the weekends when he brought his children out to the coast. Our six kids, mine aged between three and six, his eight and ten, formed a pack, camping together in the garden, wandering down to the beach for picnics on the sand.

I wasn’t attracted to him in the beginning, although I did think he had a wonderfully patrician nose and a ready smile. He was very good at fixing things. Every time something broke, he would wander over to take a look, replace the leaking pipe, oil the creaking window, and stay for a cup of coffee or a glass of wine.

Our relationship grew slowly, neither of us seeing the need to rush. We had our children, had our lives that were full.

Slowly, slowly over the next couple of months, it felt as if a spark had been lit — but how different it was from the sparks that had been lit before.

Falling in love in your late 30s and 40s is a totally different experience to earlier in life. There were no evenings spent waiting for the phone to ring, no mooning over my sexy landlord and wondering whether he would be there that weekend.

I had other things to think about — my children, life as a single mother, my work, my friends. When Ian was around, I was delighted. And when he wasn’t, I just got on with my life, a life that wasn’t supposed to include romance. 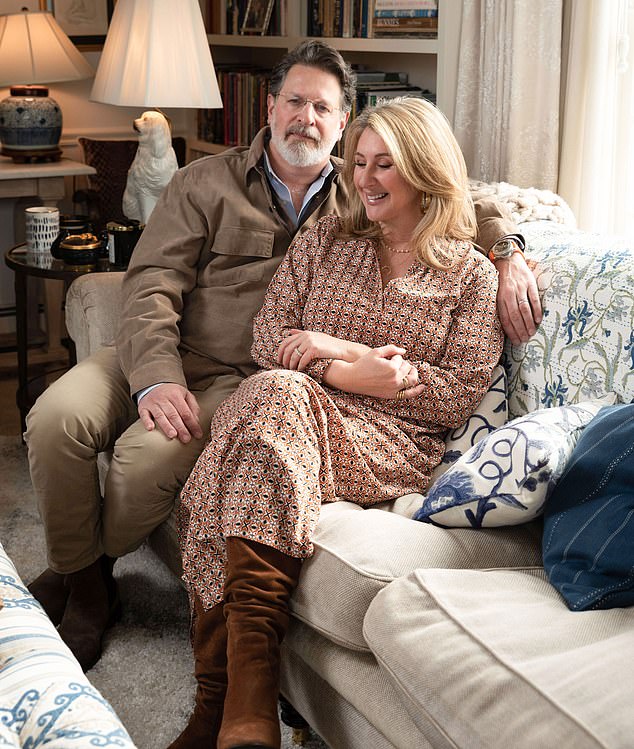 My friends had other ideas, however. I was dragged to a singles bar one night, on the terrace of a country club that had live music on a Sunday night. The women were all gorgeous, in high heels and floaty chiffon tops, flicking their hair around as they gazed at the men gathered at the bar, seeking out a potential Mr Right.

I shuffled through the crowd in my flip-flops, eyes downcast, hoping not to meet anyone’s eye in case they thought I was interested. The prospect of flirting horrified me. The idea of dating, of sitting with someone over a dinner table and telling them my stories, was exhausting.

With Ian, however, it was a different story. I’d wander outside to bring the mail in, still in my pyjamas, my face unwashed, and stop to chat with him.

By early July, I realised the happiness I felt each time I saw him had turned into something else. I felt so calm and peaceful when he was around.

At night, once the kids were asleep, we would take the dogs for a walk along the beach — and one night, as we walked, he put an arm around me. A few steps later we were kissing, and I knew there was no going back.

Our kiss that night was the start of everything, and when we finally got together it was for all the right reasons.

I was comfortable enough in my skin, after years of painful discomfort, to recognise that I wouldn’t settle for game-playing, nor would I play games myself. I wouldn’t pretend to be out when I was at home watching telly with the kids, nor pretend to be anyone other than myself.

If he didn’t like me as I was, that was fine. We could both move on.

What struck me instantly, as soon as we became involved, was the level of kindness in our relationship, and the level of mindfulness about how we treated each other. Even when we had bad days, we resolved not to take it out on each other, to be careful with our words. 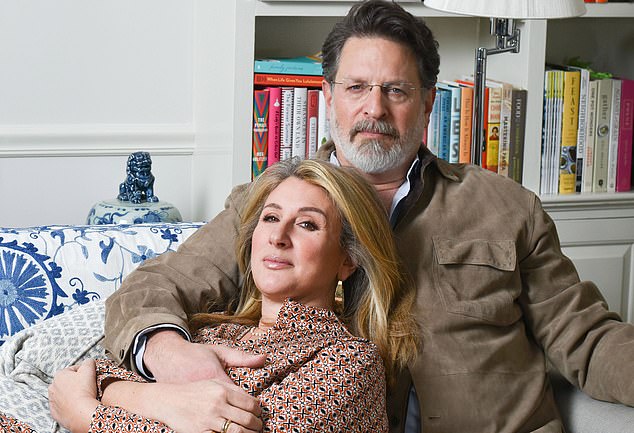 The insecurities and neediness of my youth had disappeared. Perhaps because I had already been married, I knew it wasn’t the be-all and end-all, and that if I ended up alone, I’d be fine.

The psychologist John Gottman spent years studying relationships. In 1986, he and a team of researchers brought newlyweds to the lab and watched them together while they were hooked up to electrodes that measured their blood flow, heart rates and sweat.

Six years later they followed up with the couples, which led to Gottman separating them into two groups: masters and disasters. The masters were happily married, the disasters either divorced or miserably married. Analysis of the initial lab results showed the disasters were constantly in fight-or-flight mode. They may have looked calm but the monitors showed their hearts were racing. They were sarcastic with each other, or dismissive.

The masters, on the other hand, were calm and connected, which translated into warm and affectionate behaviour. Gottman continued to study what made the masters work and found that it was, essentially, kindness. Not necessarily the kindness of, for example, bringing your partner a cup of tea in bed, but more often the kindness of attention.

When you’re busy and your partner asks a question or comments on something outside the window, it is so often the kindness of putting down what you’re doing and paying them attention that makes the difference. After three years together, Ian and I married on March 6, 2009. It was a tiny wedding, with our children and parents, in the living room of a boutique hotel in our town.

I did the flowers myself, and teared up as we said our vows, unable to believe I had found this good, good man, that I finally understood what love can be. It was a world away from my first wedding, with almost 200 people, where I felt I was putting on a show, knowing deep down that something wasn’t right. 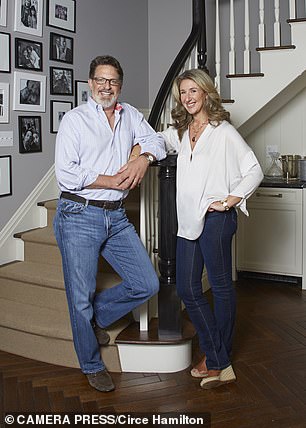 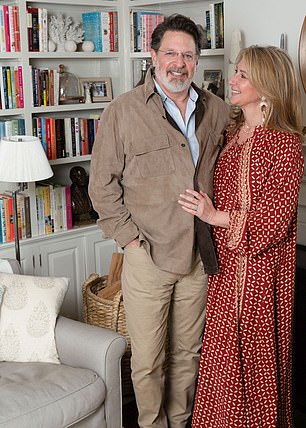 The couple moved from Jane’s home town of London and were living in Connecticut, in an old farmhouse in the countryside

John Gottman describes the Four Horsemen of the Apocalypse in relationships as criticism, defensiveness, stonewalling and contempt. Ian and I had both had plenty of experience with those four horsemen, and we went out of our way to ensure they had no place in our relationship.

The past 13 years have been the happiest of my life. Our romance even inspired a few novels: Second Chance, in 2008; Beach House, in 2009; and more recently, Falling, in 2016. It tells of a woman, tired of city life, who moves to the sea and finds love with her very handy landlord!

We have had our ups and downs. Second marriages bring with them a tremendous amount of baggage: stepchildren, ex-husbands, ex-wives, former in-laws, parents, child support, alimony. Any one of these can put stress on a relationship, but all of them at once can sometimes seem insurmountable.

In my first marriage, arguments often led to days of sulking. But while Ian and I occasionally argue, it doesn’t last. We listen to each other and make sure we finish the conversation, never going to sleep while there is still discord.

A few things have seen us through. The first is kindness and the second communication; the willingness to hear each other when we are upset.

Acceptance has also been a huge part of our happiness: recognising that we cannot change another person, nor should we try.

I feel grateful. I know what the wrong choice feels like and, now, how good the right one can be.

I found love in midlife, and this Valentine’s Day, as all thoughts turn to love, why shouldn’t others do the same?

Dancing On Ice: Pussycat Doll Melody Thornton is the seventh star to join line-up
Sajid Javid is favourite to replace Theresa May, with Hunt, Raab and Boris lagging behind
New Roman graffiti found in project to record ancient quarry carvings
Duchess of Cambridge greets troops at Beating Retreat ceremony
Antoinette Lattouf has huge cyst identified after viewer email
Grimes posts ANOTHER baby bump photo to Instagram after declaring herself 'knocked up'
Factory worker, 53, stabbed to death after confronting a gang
TALK OF THE TOWN: Prince Charles' fury over Meghan