A woman has criticised online retailer PrettyLittleThing for its sizing after being sent a dress that barely covers her modesty.

Size 12 shopper Bethanie Moore, 21, from Wolverhampton, ordered the black wrap dress in a size 14, just in case it came up a little small.

However she was left shocked when she put the dress on and found the fabric didn’t pull across her midriff properly, leaving her underwear on show.

The disappointed student tweeted the clothing brand and asked it to explain. 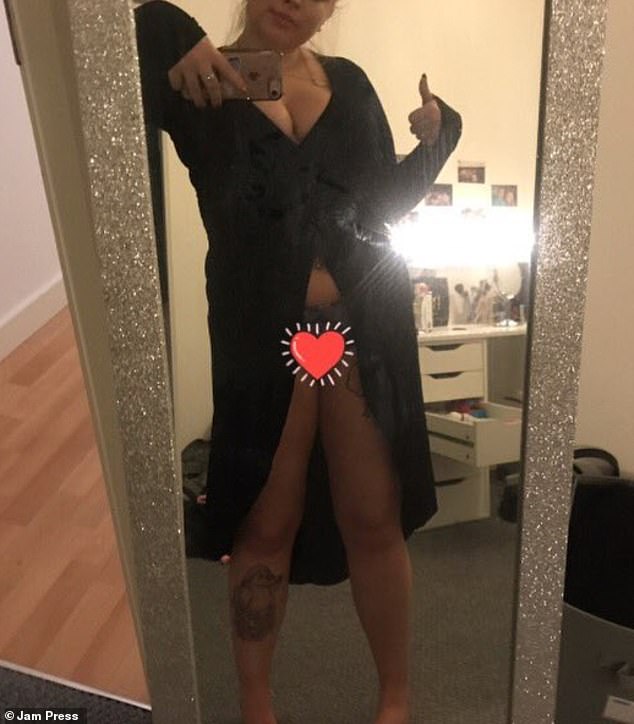 Size 12 shopper Bethanie Moore, 21, from Wolverhampton, ordered the black wrap dress from PrettyLittleThing in a size 14, just in case it came up a little small but she was shocked when she tried it on at home and found there was not enough fabric to cover her underwear, pictured 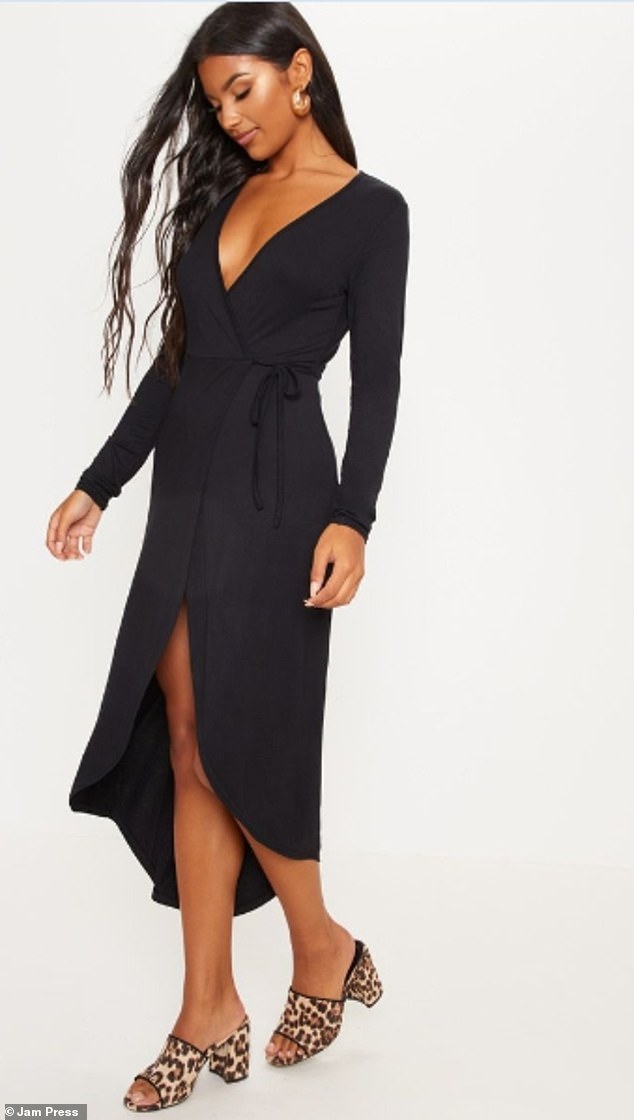 The customer tweeted side-by-side photos of herself and the PrettyLittleThing model, pictured, to highlight how different the dress looked online 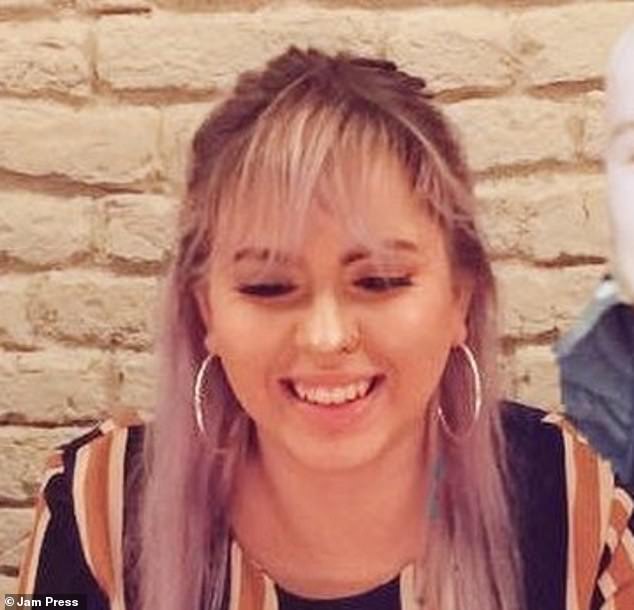 Bethanie Moore criticised online retailer PrettyLittleThing for their sizing, after being sent a dress that barely covered her modesty

She claims she has yet to receive any comment from the online retailer.

Bethanie posted a side-by-side photo of herself in the dress alongside the image of a model from the website, and tweeted: ‘Explain this please’.

The shopper ordered a size 16 dress at the same time but claims she ‘couldn’t get it over her shoulders’. 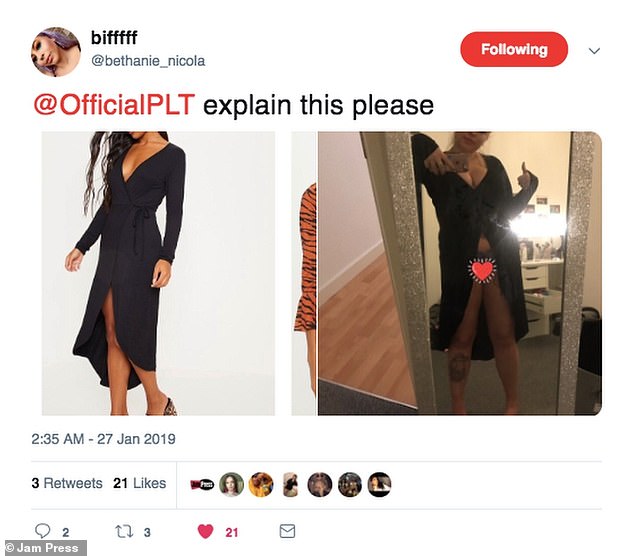 Bethanie posted a side-by-side photo of herself in the dress alongside the image of a model from the website, and tweeted: ‘Explain this please’ 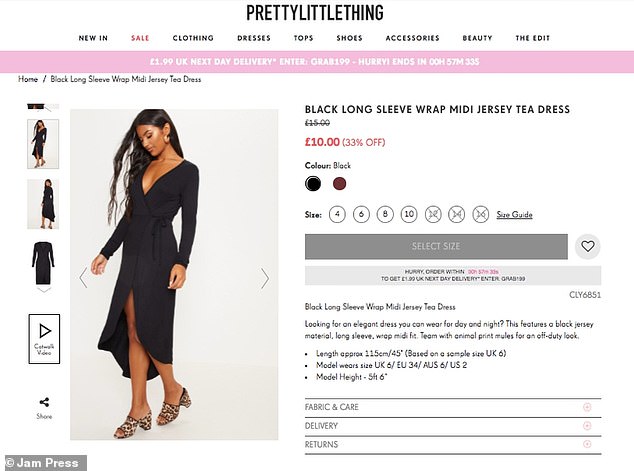 The black Long sleeve wrap midi jersey tea dress is £10 on the site, but Bethanie said it looks nothing like it does on the site

She later said: ‘I think it really knocks a girls confidence having to go up to a size bigger. Even though the average UK size for females is 12 we’re constantly seeing models wearing a size 6-8.’

‘I think it’s important sizing is accurate and girls aren’t made to feel any bigger than they are –  when we already feel pressure to be slim!’

And the disappointed customer said that the design wasn’t even the same as it was on the website. 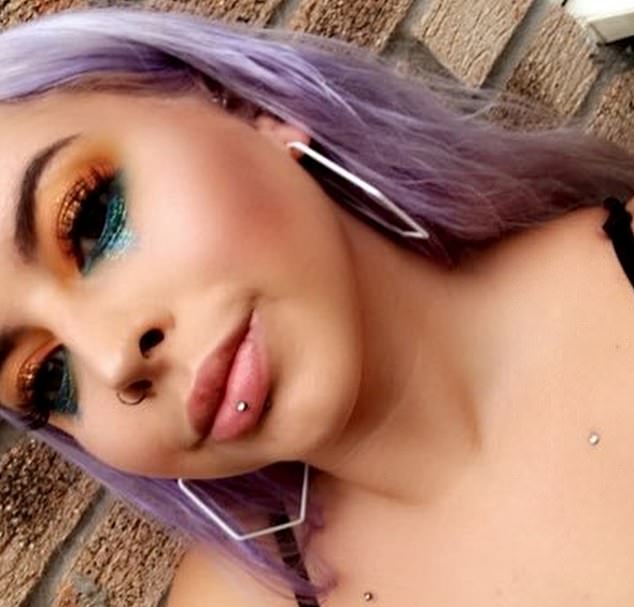 ‘The dress was a totally different design to what was displayed online, and as you can see from my picture the sizing is way off,’

‘I even sized up when ordering, to a 14, as I knew PrettyLittleThing and other brands are known for having dodgy sizing – but it was still awful!’

One of her followers commented on her tweet, jokingly saying: ‘I like it’. Bethanie joked back saying ‘Trendsetter’ but added: ‘had to use a lil [little] emoji to cover my dignity (what is left of it)’.

Bethanie returned the dress but didn’t reorder it in a different size.

TALK OF THE TOWN: Spice Girl Mel B’s fury as she misses out on £2million X Factor lifeline
June Whitfield, 93, admits she can't stand TV anymore as there's too much 'sex and swearing'
Neighbour runs across road and pulls burning can of petrol from under Range Rover
Fury as Nando's is voted Preston's favourite restaurant and Wetherspoon its top pub
Breakthrough pill that expands in patients’ stomach DOUBLES the chance of losing weight
Schoolboy's condition means he's in danger of suffering a stroke every time he gets excited or tired
Mike Pompeo arrives at secretive Bilderberg conference in Switzerland despite NOT being on guestlist
Walmart is to remove 'violent and aggressive' video game displays