Whitaker indicated he wouldn’t reveal conversations with President Trump, but after several tussles with lawmakers did provide a handful of substantive responses.

But on other matters – such as whether he was briefed during a six-day span before Christmas – Whitaker held back. 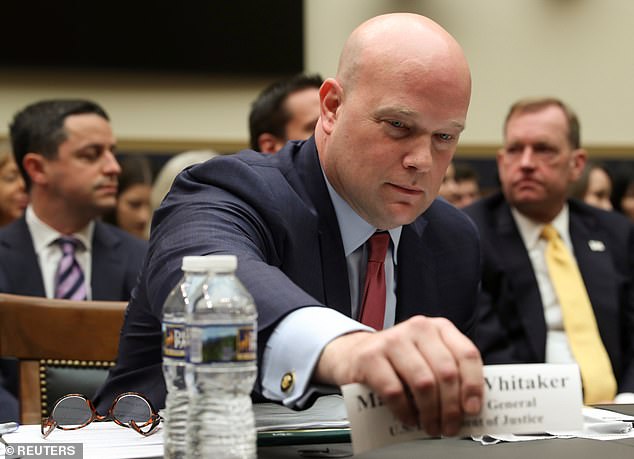 Committee chairman Jerold Nadler of New York tore into Whitaker before the witness was even sworn in, following the White House indication that Trump’s hand-picked acting attorney general will refuse to answer Mueller probe questions by referencing executive privilege, even if Whitaker stops short of formally invoking it.

‘In other words you refuse the right to answer the question forever. That’s not how it works,’ Nadler scolded Whitaker.

With White House lawyers stating sanctity of internal executive branch conversations, Whitaker bobbed and weaved to avoid getting pinned down about the Mueller probe. 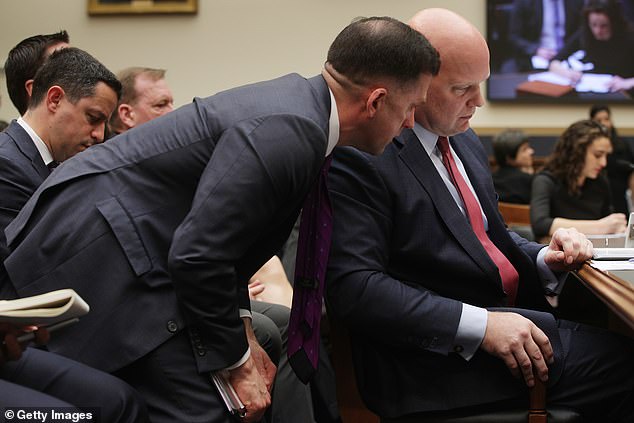 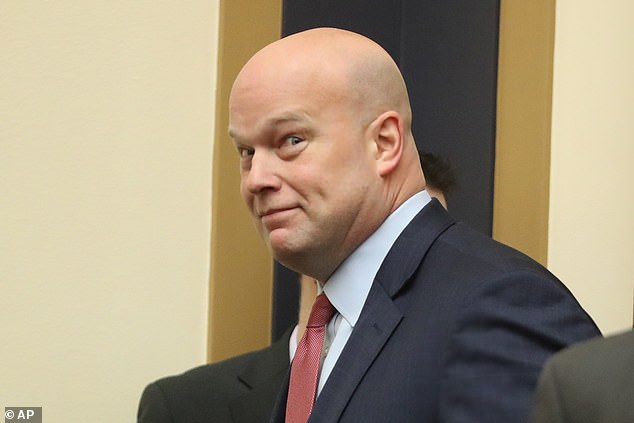 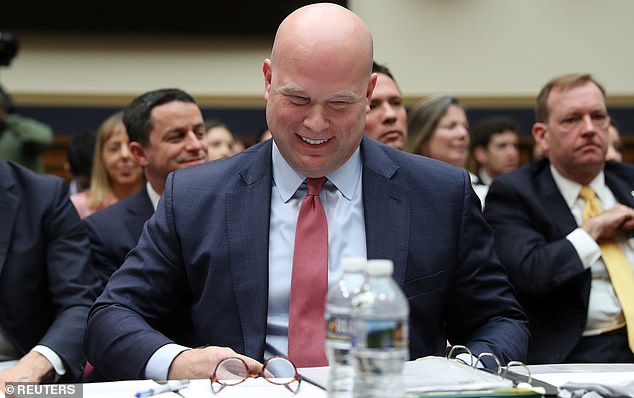 HOW HARD CAN THIS BE? ”There has been no event, no decision that has required me to take any action, and I have not interfered in any way in the special counsel’s investigation,’ Whitaker told lawmakers

But in several instances, after an initial deflection, he provided at least part of the answer that Democrats were looking for.

He refused to say how many times he has been briefed on the Mueller probe. Whitaker’s involvement is of paramount interest to Democrats, both because of the importance of the investigation and Whitaker’s past public comments blasting the probe before he assumed his post.

Angry Republicans sought to push back and protect President Trump’s hand-picked nominee, and immediately moved to adjourn the hearing.

‘They just want a piece of you,’ said Republican Rep. Doug Collins of Georgia.

He was responded to Whitaker’s opening statement, which stated: ‘I want to assure you that I will seek to answer the Committee’s questions today, as best as I can, but I also must make clear that I will continue the longstanding Executive Branch policy and practice of not disclosing information that may be subject to executive privilege, such as the contents of deliberations or conversations with the President.’

‘As the Supreme Court has recognized, this executive privilege is fundamental to the operation of Government and inextricably rooted in the separation of powers under the Constitution.  I trust that the Members of this Committee will respect the confidentiality that is necessary to the proper functioning of the Presidency – just as we respect the confidentiality necessary to the Legislative Branch.’

The statement was an indication that Whitaker would refuse to answer the most charged questions Democrats are girding to ask about the Russia probe.

Nadler also went after Whitaker’s TV appearances from before he was brought in as chief of staff to Attorney General Jeff Sessions and then tapped by Trump to replace him in an ‘acting capacity.’

‘These media appearances … have become the cause of much concern,’ Nadler told him.

Democrats are anxious to interrogate Whitaker about the Russia probe, after he said publicly he has been fully briefed on it. They want to know if he gave Trump a head’s up on pending actions, like the raid and indictment of longtime advisor Roger Stone.

Whitaker told committee members that at no time had the White House sought, or had he provided ‘promises or commitments concerning the Special Counsel’s investigation or any other investigation.’

Republicans took up the role of defending Whitaker. ‘This hearing is pointless,’ thundered Rep. Doug Collins, the top Republican on the panel, noting that Trump’s nominee to be the next AG just cleared the Senate Judiciary Committee.

Trump repeated his ‘NO COLLUSION’ claim in reference to another committee’s investigation, referencing the bipartisan investigation of the Senate Intelligence Committee, which has yet to finish its work.

‘The mainstream media has refused to cover the fact that the head of the VERY important Senate Intelligence Committee, after two years of intensive study and access to Intelligence that only they could get, just stated that they have found NO COLLUSION between “Trump” & Russia,’ Trump wrote in a pair of tweets.

‘It is all a GIANT AND ILLEGAL HOAX, developed long before the election itself, but used as an excuse by the Democrats as to why Crooked Hillary Clinton lost the Election! Someday the Fake News Media will turn honest & report that Donald J. Trump was actually a GREAT Candidate!’ the president wrote.

Whitaker caved to Democratic demands and showed up voluntarily after a tumultuous day of doubts Thursday on whether or not he would appear.

The Justice Department claimed Democrats agreed to Whitaker’s demanded they would not wield a subpoena against him.

‘The chairman has made the commitment that we requested, and agreed that, if Mr. Whitaker voluntarily appears at tomorrow’s hearing, the Committee will not issue a subpoena on or before February 8,’ Justice Department spokesperson Kerri Kupec said in a statement to . ‘In light of that commitment, Acting Attorney General Whitaker looks forward to voluntarily appearing at tomorrow’s hearing and discussing the great work of the Department of Justice.’ 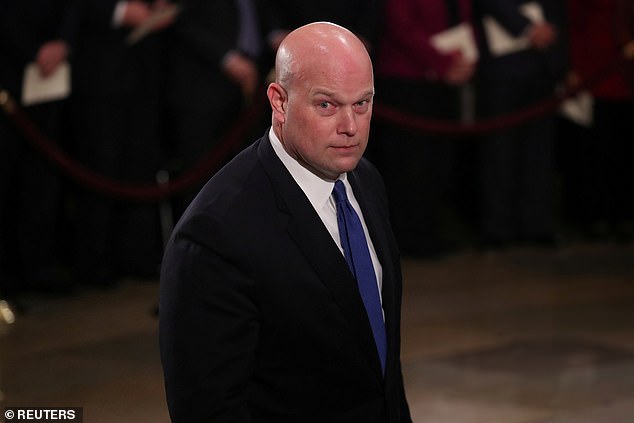 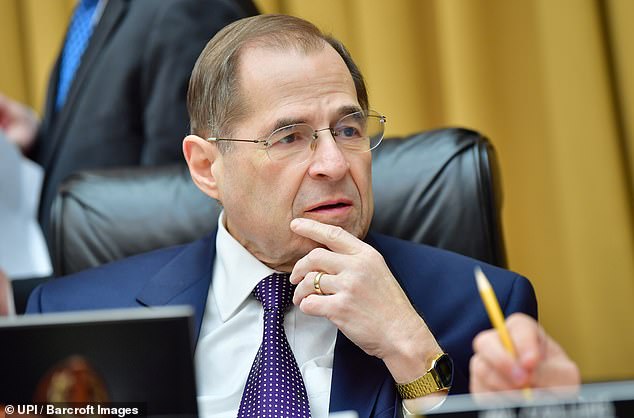 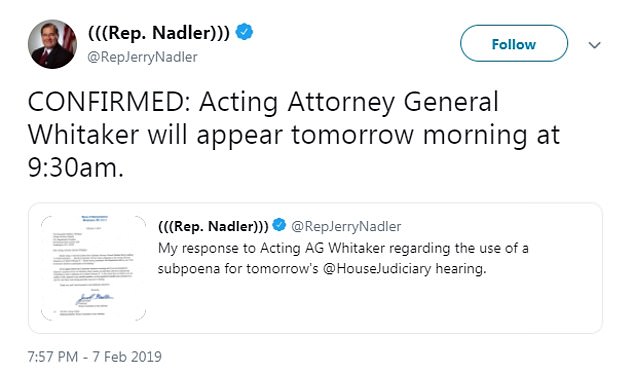 Earlier Thursday Whitaker wrote House Judiciary Chairman Jerry Nadler and asked for a reassurance that Democrats on his panel would not use a subpoena they pre-emptively authorized in case he avoids answering their questions.

Nadler slammed back at his demand, writing that the acting attorney general had no reason to worry if he’s ‘prepared to respond to questions’ and ended with a cheery: ‘I look forward to your testimony tomorrow.’

Whitaker had given Democrats a 6 p.m. deadline to respond in their escalating conflict.

Nadler wrote back late Thursday afternoon: ‘If you appear before the Committee tomorrow morning and if you are prepared to respond to questions from our Members, then I assure you that there will be no need for the Committee to issue a subpoena on or before February 8. To the extent that you believe you are unable to fully respond to any specific question, we are prepared to handle your concerns on a case-by-case basis, both during and after tomorrow’s hearing.’

He concluded with: ‘Thank you, and I look forward to your testimony tomorrow.’

The House Judiciary Committee on Thursday voted to authorize the subpoena ahead of his testimony.

Democrats want to ask Whitaker about his conversations with President and Whitaker’s decision not to recuse himself from special counsel Robert Mueller’s probe. They are worried he may not answer.

Asked whether Whitaker wouldn’t testify due to a subpoena threat, President Donald Trump replied, ‘That I don’t know.’

‘He’s an outstanding person. I would say if he did testify he’d do very well,’ the president told reporters Thursday in the Oval Office.

The conflict began Thursday morning when the Justice Department sent a letter to the committee asking for reassurances before the acting attorney general met with them.

He added: ‘Political theater is not the purpose of an oversight hearing, and I will not allow that to be the case.’

Nadler said during Thursday’s authorization vote that he hoped not to have to use the subpoena but wanted to be prepared in case it was needed.

‘I hope not to have to use the subpoena,’ he said. ‘Unfortunately a series of troubling events over the last few months suggest that we should be prepared.’

Democrats worry Whitmaker may try to evade some of their questions and wanted a subpoena on hand to use if that is the case.

‘If Mr. Whitaker appears in the hearing room, as scheduled, and if he provides direct answers to our questions, then I have no intention of ever issuing this subpoena,’ Nadler said Thursday.

The resolution to authorized the subpoena passed on a party-line vote, 23 to 13.

In a letter to Nadler, the Justice Department outlined the questions that Whitaker is prepared to answer. 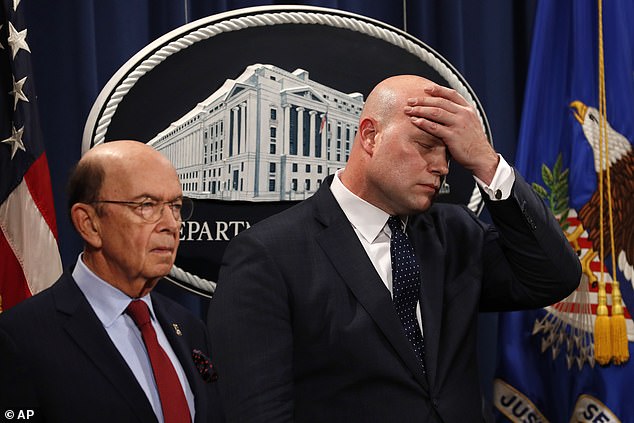 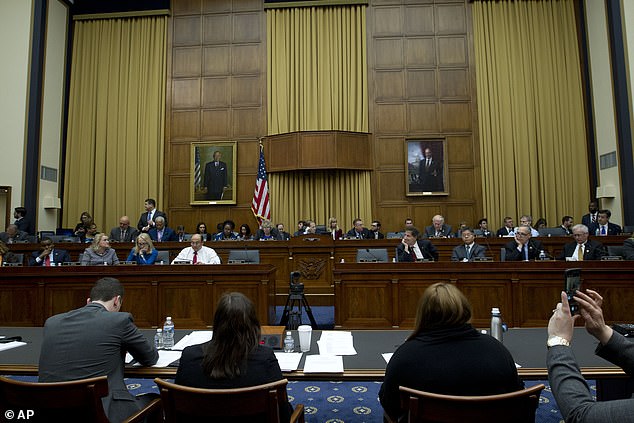 Nadler argued the subpoena was necessary because Whitaker would not tell the committee whether or not he planned to invoke executive privilege.

Friday’s hearing would likely be Whitaker’s last appearance before Congress.

On Thursday, the Senate Judiciary Committee voted to advance William Barr’s nomination as attorney general to the Senate floor, setting up a vote for next week.

US Army director chosen for top immigration post loses job after anti-Muslim rants were discovered
Trump tried to change his sick father's will so he could use dad's empire for collateral
Bizarre footage shows a little dog STRUTTING on its back legs
Texas A&M coach Jimbo Fisher's nephew accused of punching an LSU staffer's pacemaker
Hillary Clinton warns Democrats not to jump to impeaching Trump and continue hearings
Mom and boyfriend accused of murdering daughter, 4, after she is found covered in bruises and bites
Trump slaps aside Democratic governors' re-opening panels, says president's authority is 'TOTAL'
New Jersey teacher tells teenagers to 'die a long, painful death' from coronavirus