Donald Trump slammed the House Intelligence Committee for ‘unlimited presidential harassment’ in a furious Twitter post today after it said it would widen the investigation into both his ‘financial and personal’ life.

Trump blasted what he called a ‘continuation of Witch Hunt!’ that Republicans ‘never did to President Obama’, following the announcement yesterday by chairman Adam Schiff that his committee would be looking for misconduct beyond Russian collusion.

‘So now Congressman Adam Schiff announces, after having found zero Russian Collusion, that he is going to be looking at every aspect of my life, both financial and personal, even though there is no reason to be doing so,’ Trump wrote. 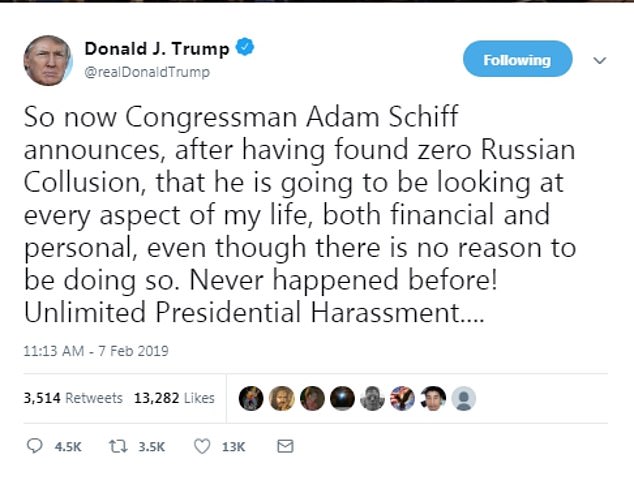 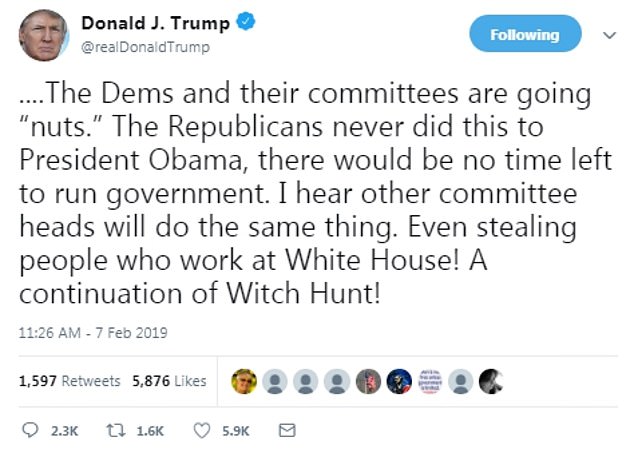 ‘The Dems and their committees are going “nuts.” The Republicans never did this to President Obama, there would be no time left to run government,’ he added moments later.

‘I hear other committee heads will do the same thing. Even stealing people who work at White House! A continuation of Witch Hunt!’

Trump yesterday referred to Congressman Schiff as a ‘political hack’ who was harassing him to get his name in the news, as both men stepped up their attacks on one another.

Schiff announced his intention to widen the investigation not long before Trump invited reporters into the Roosevelt Room for the introduction of World Bank nominee David Malpass.

Trump pretended not to be familiar with the politician he’s slammed as Adam ‘Schitt’ before telling a reporter who asked about the probe, ‘On what basis would he do that. He has no basis to do that. 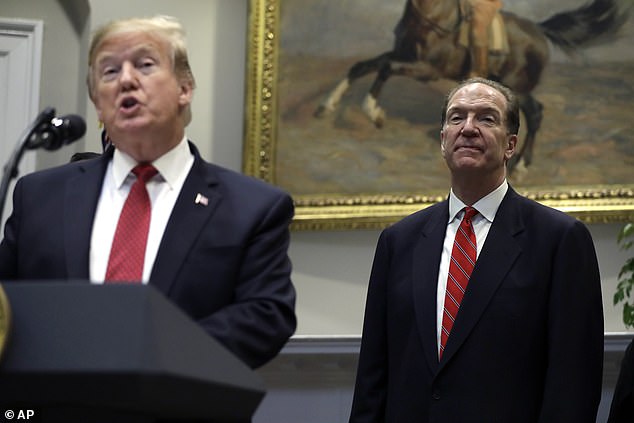 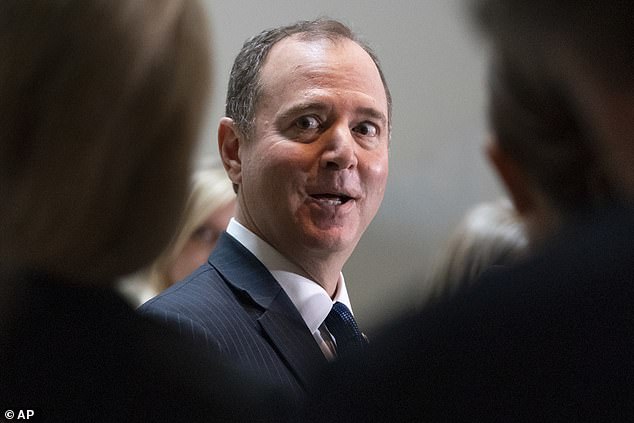 Schiff made the announcement not long before Trump invited reporters into the Roosevelt Room for an event. The House Democrat is seen here, talking to reporters, immediately beforehand

‘He’s just a political hack, who’s trying to build a name for himself. And I think that’s fine, because that’s what they do,’ Trump said. ‘But there would be no reason do that. No other politician has to go through that. It’s called presidential harassment. And it’s unfortunate, it really does hurt our country.’

An hour later, Schiff responded on Twitter. ‘I can understand why the idea of meaningful oversight terrifies the President,’ he said.

‘Several of his close associates are going to jail, others await trial, and criminal investigations continue,’ he noted. ‘We’re going to do our job and won’t be distracted or intimidated by threats or attacks.’

Trump angered congressional Democrats on Tuesday night when he complained in his State of the Union speech about ‘ridiculous partisan investigations’ that are diluting bipartisan sentiments.

‘If there is going to be peace in legislation, there cannot be war and investigation. It just does not work that way,’ he lectured.

House Speaker Nancy Pelosi encouraged Trump on Wednesday afternoon to use a prodigious amount of caution when addressing lawmakers in that manner.

‘The president should not bring threats to the floor of the House,’ she said.

Trump’s words were taken as a warning to House Democrats from the president about investigations they’re launching into his administration.

‘He said he wasn’t going to cooperate unless we didn’t exercise our constitutional responsibility to oversight,’ Pelosi said of Trump’s remarks.

The U.S. Senate’s top Democrat also fired a warning shot at  on Wednesday, saying he only demanded d that House back off from ‘partisan’ investigations because ‘he’s afraid of them.’

Chuck Schumer, the Senate’s minority leader, mocked the president’s call for bipartisan cooperation instead of ‘foolish’ opposition from the House majority now led by Pelosi.

‘He’s scared,’ Schumer said hours later during an interview on CNN’s ‘New Day’ program. ‘He’s got something to hide.’ 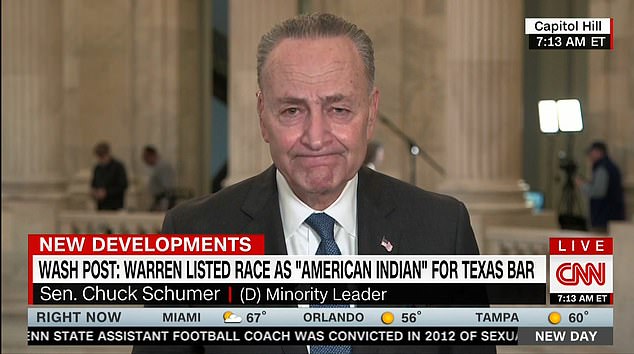 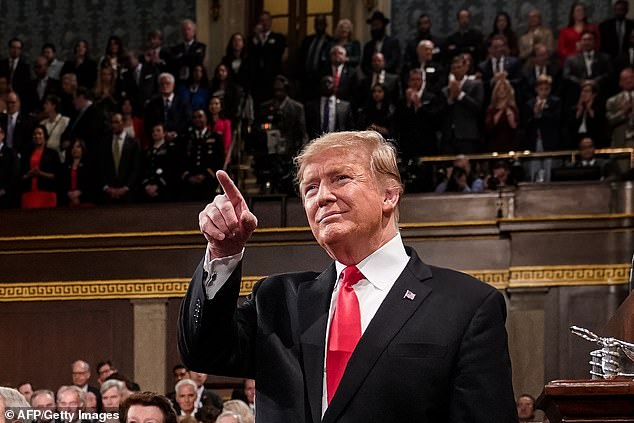 ‘He’s got something to hide,’ Schumer said of the president, who faces a raft of new Capitol Hill probes led by the new Democratic House majority

Schumer has been gleefully anticipating probes from the other end of the Capitol, focused on everything from White House securiy clerances to so-far unsubstantiated claims that his 2016 campaign aides colluded with Russian agents to help tilt the election.

Schumer scoffed at the idea that Trump has any place asking for the soft-glove treatment.

‘One of the functions of the Congress, the Article I section of government, from the days of the founding fathers, was oversight of the executive branch,’ he told CNN host John Berman.

‘And the president says, “If you investigate me, I’m not going to make progress.” That’s already doing what he did with the shutdown, holding the American people hostage. You know what I think it shows, John? He’s scared. he’s got something to hide.’ 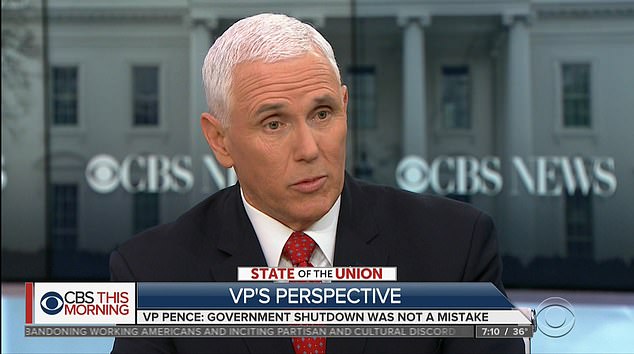 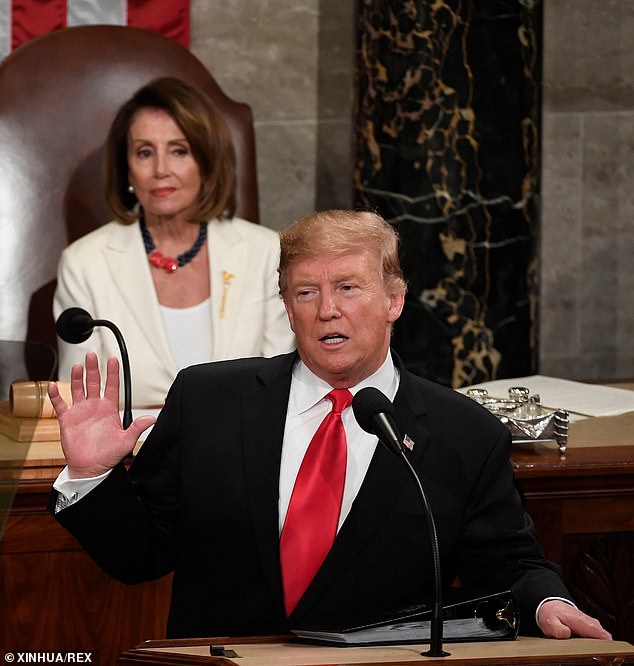 Trump began his speech with a call for bipartisan unity, but insisted on a my-way-or-the-highway approach to immigration and other contentious issues 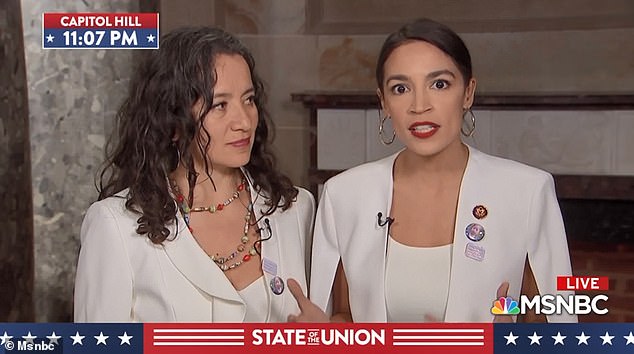 Rep. Alexandria Ocasio-Cortez, the 29-year-old socialist who has emerged as a Democratic Party leader, said on NBC that Trump’s demand ‘was, frankly, kind of bizarre’

‘Because if he had nothing to hide,’ Schumer concluded, ‘he’d just shrug his shoulders and let these investigations go forward. He’s afraid of them.’

On ‘CBS This Morning,’ Vice President Mike Pence acknowledged that ‘congressional oversight is a part of the checks and balances of our system.’

Pence said that Trump was only referring to ‘partisan investigations’ that have been launched.

‘You know his feelings about investigations on Capitol Hill,’ said Pence, who served 12 years in Congress before becoming Indiana’s governor.

‘We don’t object to oversight. That’s the proper role of committees in the Congress. But when it takes on a partisan tint, when it seems more intent on becoming a forum for invective against the president and the administration, the American people expect better.’

Rep. Alexandria Ocasio-Cortez, the 29-year-old democratic socialist who has emerged as a Democratic Party leader, said on NBC that Trump’s demand ‘was, frankly, kind of bizarre.’

‘I don’t think that investigations into federal misconduct have anything to do with our economy,’ she said.

Trump had begun the assault by talking about last month’s jobs numbers.

‘An economic miracle is taking place in the United States, and the only thing that can stop it are foolish wars, politics, or ridiculous, partisan investigations,’ he’d said.

Aretha Franklin web value was $80million when she died and obtained money cost earlier than exhibits
Lady Colin Campbell 'could be making Meghan her next target'
Lori Loughlin hides beneath fisher hat to grocery shop... after daughter Olivia Jade golfs with beau
Princess Charlotte refuses to hand over white roses she was gifted by 'star stuck' royal fan, six
Jared Kushner's taskforce is like 'a frat party' which descended from a UFO
Chrissy Teigen blocks 1 MILLION people on Twitter as her account is 'flooded by sick psychopaths'.
Liberty University President Jerry Falwell Jr. will take 'indefinite leave of absence'
Moment 180ft crane collapses with the operator still inside after it is hit by container ship