Marks & Spencer has sent shoppers into a frenzy with a heart-shaped ‘love sausage’ launched just in time for Valentine’s Day – prompting amused customers to flood social media with humorous innuendos.

Describing the £5 feast as ‘the ultimate meaty delight for Valentine’s breakfast in bed,’ the retailer asked in a post: ‘Are you ready for our Love Sausage?’

And amused shoppers were keen to offer their witty responses, with one joking: ‘You’d have someone’s eye out with the size of that!’

Another added:  ‘It looks like two giant grubs mating,’ penned one unimpressed Twitter user, while another commented: ‘Nothing says love more than processed meat.’ 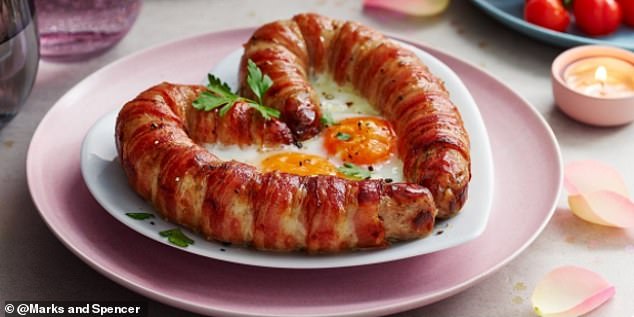 Marks and Spencer is selling a heart-shaped ‘love sausage’ just in time for Valentine’s Day (above). They have described it as ‘the ultimate meaty delight for Valentine’s breakfast in bed’ and will be available in stores from 8th February

Amused shoppers took to social media with witty responses after the new romantic product was announced. One joked: ‘You’d have someone’s eye out with the size of that!’

The romantic meal is made with outdoor-bred pork sausage wrapped in outdoor-bred streaky bacon, while the recipe includes a hint of truffle – a natural aphrodisiac the store assures will ‘sure put a smile on your Valentine’s face!’

In a promotional shot, which has already been liked over 500 times on Twitter, the heart-shaped sausage is surrounded by tea lights and pretty pink petals to add to the romantic mood.

While the retailer urged customers to share their posts using the hashtag #LoveSausage, shoppers were more interested in making jokes about they meaty treat.

‘You’re really opening yourselves up for real innuendo today with your “love sausage”‘ a shopper enthused, while another wittily wrote: ‘I think someone’s sausage needs medical attention.’

A third commented: ‘The social media team at @marksandspencer have just won Twitter for the day, give up folks, nothing to see here but some Love Sausage.’

Another suggested the sausage was just the next natural product to gift someone – after the more predictable options: ‘Chocolates. Flowers. Teddy bear. Sausage. All the standard Valentine’s Day gifts.’

For those eager to get their hands on the love sausage, it is available in stores from 8th February – but not everyone will be rushing out to buy it for their loved ones.

‘Love sausage? Have I slept through February and March and woken up on April Fool’s Day?’ one wrote.

While the majority enjoyed the lighthearted bit of fun, some unimpressed comments included, ‘stay classy M&S’ and ‘romance isn’t dead’

‘We’re encouraging customers to start the fun of Valentine’s Day celebrations early with a Love Sausage for breakfast,’ said an M&S spokesperson.

‘The recipe includes a hint of delicious truffle to make it extra special and my top tip is to crack two eggs into the centre of the heart, eight minutes before serving for the breakfast of dreams.’

Judge heaps praise on brave homeowner who knocked burglar’s teeth out during break-in at his home
Jeremy Kyle Show was suspended 'to protect' its future, ITV leaked email reveals
Holly Branson flies Virgin economy with her three children
Nearly 19,000 children in England are exploited in a year
Chinese doctor, 34, who sounded the alarm over coronavirus DIES from it
Nike closes all stores in US, Canada, Western Europe, Australia, and New Zealand due to coronavirus
New US unemployment claims reach record 6.6 million in a week
Britain has the HIGHEST rate of excess deaths in Europe