A 24-year-old man has been arrested in connection with the disappearance of Hull student Libby Squire, Humberside Police said today.

Detectives said last night they are investigating ‘all possibilities’ amid growing local fears that she may have been abducted and now a suspect has been held.

A Humberside Police spokesman said: ‘Officers made the arrest at an address in Raglan Street, Hull, last night.

‘The man remains in our custody, assisting us with our enquires. We have not yet found Libby and doing so remains our top priority.

‘Libby’s parents have been informed of the man’s arrest and we’re continuing to support them at this difficult time’.

Libby Squire, 21, (pictured left and right) went missing in Hull on Thursday night after she was dropped back at home at 11.29pm in Wellesley Avenue, Hull – police have now arrested a man, 24 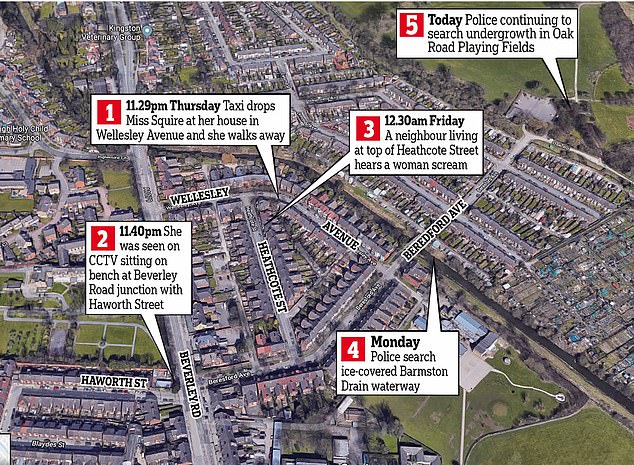 Dozens of police officers have been searching for the 21-year-old philosophy undergraduate, pictured, for six days without finding any clues.

A specialist police marine unit has thoroughly searched a large pond and waterway a few minutes’ walk from Miss Squire’s home in Hull.

And yesterday 20 officers scoured a wooded area near playing fields without success.

At least one known sex offender has been questioned and had his premises searched, and police have carried out searches at numerous properties in the area.

The investigation is officially still a missing person inquiry, but concerns are growing with each passing day.

A neighbour who asked not to be named said yesterday: ‘If she had suffered an accident then you’d think she would have been found by now. It doesn’t look good.’

Liberal Democrat city councillor Paul Drake-Davis added: ‘People are very concerned about it. Everyone is in a bit of shock and we are praying for good news.

‘This is generally regarded as a safe area. I know it’s a cliché but you don’t expect this sort of thing around here.

‘But as long as police say there is hope, we will keep that candle burning for her. It’s a desperately sad situation but we won’t give up hope just yet.’

A taxi dropped off Miss Squire outside her home in Wellesley Avenue at 11.29pm last Thursday.

Students who saw her said she was so drunk that she was ‘mumbling and struggling to walk’.

Instead of going inside, Miss Squire walked down the road and was seen on CCTV sitting on a bench on the main Beverley Road 300 yards away. Police said she was in the area until 12.09am. 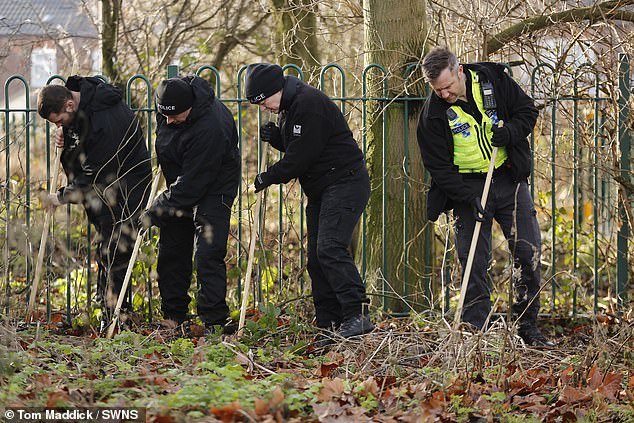 Officers were seen raking long grass in a wooded area in Oak Road Playing Fields in Hull, 500 yards from where the university student was last seen on CCTV

Chief Superintendent Phil Ward said: ‘While the investigation has been treated as a missing person inquiry, we continue to keep an open mind as to the circumstances surrounding Libby’s disappearance. We must carry out a thorough investigation and explore all possibilities.’

Miss Squire’s parents, Lisa and Russell, have travelled to Hull from their home in High Wycombe, Buckinghamshire, and are anxiously awaiting developments.

They have walked the streets where their daughter was last seen.

Police close off Knightsbridge after a 'medical incident'
'Catastrophic' accident was narrowly averted when packed holiday jet smashed into a runway light
Saudi refugee who feared family would kill her given asylum in Canada
Three arrested in probe into claims of anti-Semitism by Labour members
MPs back Cooper and Letwin plan to stop No Deal and delay Brexit again in knife-edge 315-310 vote
Kavan Maddocks: Father of man in coma urges doctors to let him die
British conman admits wooing a divorcee by posing as an MI6 agent
Essex woman fights off giant eagle to save tiny dog