A grandfather who has motor neurone disease and is set to end his life at the Dignitas clinic has called for a change in the law after his 76-year-old wife was grilled by police.

Retired accountant Geoff Whaley, from Buckinghamshire, has chosen to die at the clinic in Zurich, Switzerland, rather than face ‘immense suffering’ in the end stages of the devastating disease.

Mr Whaley, 80, wants assisted suicide to be made legal in the UK after his wife of 52 years, Ann, was interviewed under caution and warned she faces 14 years in prison for helping her husband to die.

Mr Whaley revealed how the stress of his wife being summoned to a police station, ‘destroyed everything we had done to prepare ourselves’. 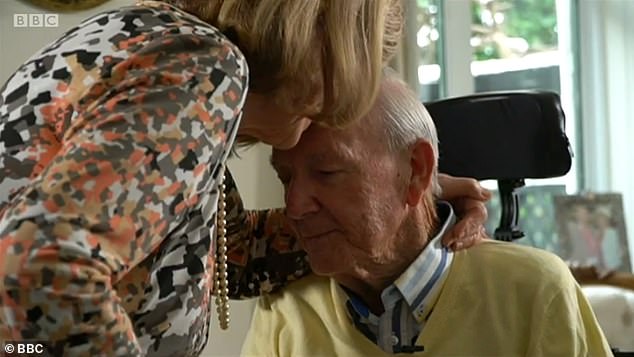 Geoff Whaley, who has motor neurone disease, is set to die at the clinic in Zurich, Switzerland today

Under English it is illegal to provide information, advice, support or assistance to anyone intending to take their own life. Family and loved ones who travel with a patient to Dignitas and are present during the process face the risk of prosecution and up to 14 years in prison when they return to the UK.

Patients travelling to Dignitas also need to be sufficiently healthy to travel from the UK to Switzerland, something that can quickly be robbed from patients with degenerative illnesses.

In May 2018, Dignitas confirmed the 394th person from the UK had died in its clinic.

Campaign group Dignity In Dying estimates that every eight days a Briton makes the journey to Dignitas.

Care Not Killing, an alliance of organisations and individuals opposed to a relaxation in assisted dying and euthanasia laws, estimates 273 Britons have travelled abroad for assisted suicide in the last 13 years.

Father-of-two Mr Whaley was diagnosed with motor neurone disease two years ago and in December doctors told him that he had six to nine months left.

He and his wife had their last meal together at a hotel in Zurich, with their two adopted children, Alix and Dominic.

Mr Whaley has left letters for his four grandchildren, aged four to 17.

He has also written a letter to the Government asking for them to reconsider the law on assisted suicide.

He said he ‘does not fear death, but fears the journey.’

Mr Whaley added the law in this country ‘robbed me of control over my death.’

He adds: ‘I want to impress upon you the anguish me and my family have experienced, not because of this awful illness (though of course this has been incredibly difficult), but because of the law against assisted dying in this country.

‘It has meant that my final weeks of life have been blighted by visits from social services and police.’

Speaking on the BBC, Mr and Mrs Whaley discussed their decision to travel to the controversial clinic in Switzerland.

Mr Whaley said he and his wife had ‘reconciled themselves’ to the fact that he would end his life and gave the reasoning behind his decision.

Mrs Whaley also revealed how she was questioned by Thames Valley Police officers who were responding to an anonymous call was received through the social services.

Mrs Whaley said: ‘When you’ve got a husband as brave as mine you have to support him.’

She added: ‘They [police] were clearly not expecting to find a non abusive situation . They were quite embarrassed.

‘His final limb had gone and he could no longer do anything for himself at all…he can’t hold a phone, he can’t press numbers, he can’t feed himself – whereas before he could hold a glass of gin and tonic even if I put a straw in it, he could do that.’

When asked about her decision to help her husband ‘commit suicide’, Mrs Whaley said: ‘I didn’t think of it like that.’

Mr Whaley told BBC Home Editor Mark Easton: ‘It is one of the illnesses that you wouldn’t wish on your worst enemy.

‘The final weeks or months which can be particularly gruesome I decided that I didn’t really want to go through that. We were quite reconciled to that.’ 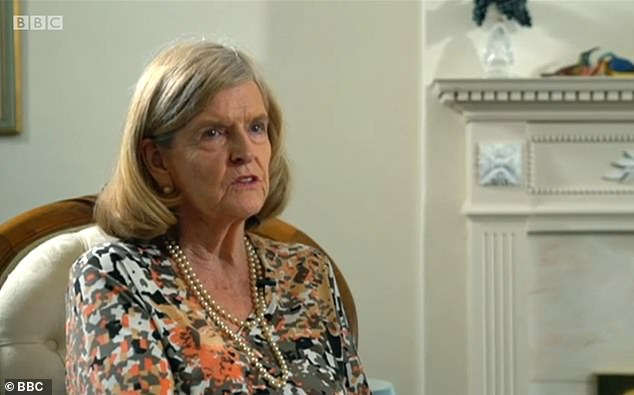 Ann Whaley, 76, was summoned to a police station to be interviewed under caution after officers responded to a tip-off

Mr Whaley decided he wanted an assisted death in Switzerland soon after his diagnosis, but worried police would take his passport, he feared his only other option would be to starve himself.

Mrs Whaley told The Times: ‘In 52 years of married life, Geoff has never cried, but that day, he put his head down and sobbed. That made me very angry.’

Police have since dropped the case, although it may be reopened should any new information come to light.

Lord Falconer critised the law on BBC Radio 4 today, arguing Mr Whaley should be given the choice to end his own life.

He told the programme: ‘The idea that this is anything other than his own choice is absurd. The law is a pig.’

Mr Whaley wrote an open letter to MPs ahead of travelling to the clinic in Switzerland.

By the time you read this, I will be dead.

On Thursday 7th February 2019, I will have taken medication that will end my life, surrounded by my wife, Ann, my children, Alix and Dominic, and a couple of my dearest friends at the Dignitas facility in Switzerland. With their love and support I have been able to fulfil my final wish: to be in control of my end, rather than endure the immense suffering motor neurone disease had in store for me.

I want to impress upon you the anguish me and my family have experienced, not because of this awful illness (though of course this has been incredibly difficult), but because of the law against assisted dying in this country. The blanket ban on assisted dying has not only forced me to spend thousands of pounds and endure months of logistical hurdles in order to secure a peaceful and dignified death overseas, but it has meant that my final weeks of life have been blighted by visits from social services and police.

Since my diagnosis of MND, an incurable, terminal illness, in 2016, I felt as though bombs have been dropping on me. I gradually lost the use of all four limbs. My ability to speak, swallow and breathe began rapidly deteriorating. I knew my death was inevitable and unavoidable, but I remained strong for my family. I am 80 years old and have lived a full life. I did not fear death, but I did fear the journey. I simply wanted to cut this suffering short by a few months. When I eventually got the ‘green light’ from Dignitas, a weight lifted; I was able to get on with living without the constant mental anguish over my death.

But then, as I was saying my final goodbyes and preparing myself for the end, the final, biggest bomb dropped and I could no longer keep it together. This bomb was in fact an anonymous phone call to social services who informed the police of my plans to go to Switzerland. Within hours Ann and I were facing a criminal investigation. The thought that I might not make it to Switzerland, or that, if I did, Ann might be facing 14 years in jail for helping me, was almost too much to bear.

In 52 years of marriage, Ann had not seen me cry. The day we were contacted by the police, I sobbed.

The law in this country robbed me of control over my death. It forced me to seek solace in Switzerland. Then it sought to punish those attempting to help me get there. The hypocrisy and cruelty of this is astounding. Though it is perfectly legal for me make arrangements and travel to Dignitas by myself, the minute anyone else ‘assists’ me in any way – which is essential, due to my condition – they are liable for prosecution.

I had the chance, just over a week before my death, to speak to some MPs and Peers about my experience and my adamant wish that the law should be changed. The overwhelming reaction in the room was one of agreement; however, I am aware that despite huge public support for an assisted dying law, most members of parliament currently oppose it. I spoke to one MP who had voted against the last assisted dying Bill in 2015. The law being proposed was limited to terminally ill, mentally competent adults in their final months, with strict inbuilt safeguards to protect the vulnerable and anyone else who has not made a clear decision of their own volition. When I pressed her on why she felt people like me should be denied a say over our own death and be forced to suffer, she was unable to articulate an answer.

I want MPs to know that change is urgently needed and that it is achievable – over 100 million people in several American and Australian states and across Canada are covered by assisted dying laws which allow choice to dying people and protection to others. No family should ever have to endure the torment we have undergone in recent weeks, but it will be easier to bear knowing that by sharing it we can contribute to future change. I sincerely hope that you will truly listen to our story and see the suffering you are inflicting by upholding the status quo.