Speaker Nancy Pelosi was visibly unamused during President ‘s State of the Union speech Tuesday night, frowning, biting her cheeks, rolling her eyes and pursing her lips throughout the night when he mentioned ideas her party disagrees with.

At other times she read along with the president’s remarks, holding up her print out of his speech in view behind him as he spoke on the dais before her.

She smiled at times as she read along but also kept her poker face firmly in place at others. Her jaw shift multiple times during the night as her eyes darted around the House chamber instead of focusing on the president before her. 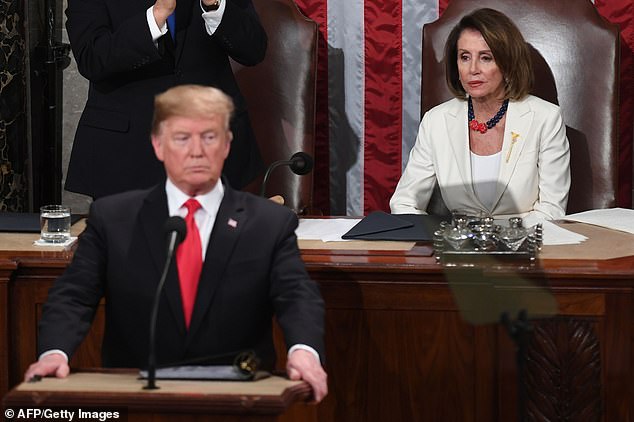 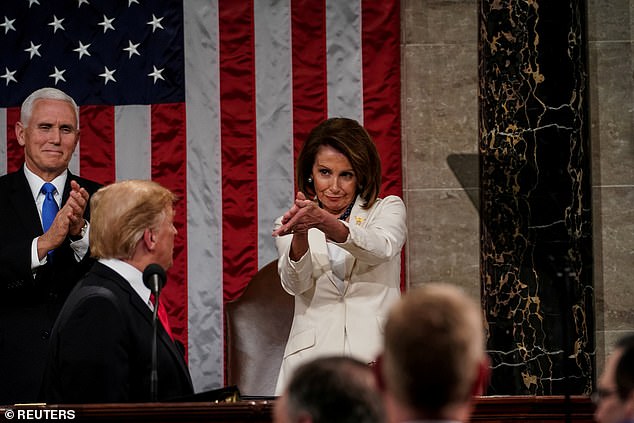 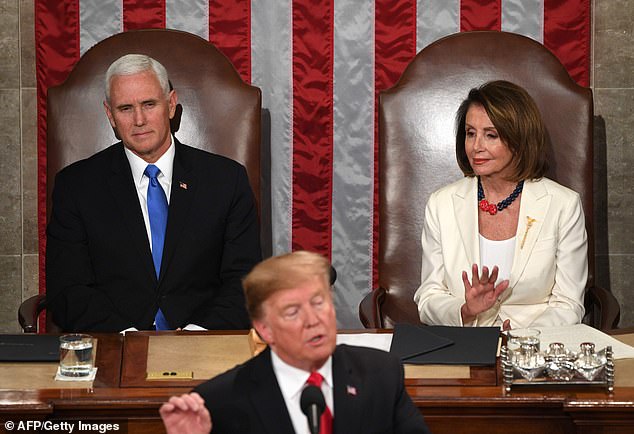 And then there were times when she didn’t hide her emotions.

She visibly shook her head and sighed when the president spoke of ‘ridiculous, partisan investigations’ directed at him.

Trump didn’t mention any names but he was likely referring to the probes by House Democrats and special counsel Robert Mueller, which he refers to as a witch hunt.

When President Trump mentioned his border wall, she sucked in her cheeks and pushed her lips together. She did not applaud.

She did attempt to hold her Democrats in line. When some of them groaned loudly when Trump said the word ‘wall,’ she lifted her hand to shush them.

Dressed in white, like the other women Democratic lawmakers to celebrate the suffragettes, the speaker drew almost more attention than the president for her reactions to his remarks.

But one line got her to stand and cheer with the rest of her party, when the president started off his night by saying: ‘Victory is not winning for our party. Victory is winning for our country,’ she joined her party in applauding him.

She also applauded him loudly, standing and raising her hands out to him, when he called for an end of ‘revenge politics.’

And she stood to cheer for three World War II veterans and Apollo 11 astronaut Buzz Aldrin who were guests of the president and first lady’s.

She also joined in the women of the Democratic Party when he mentioned the high unemployment numbers among women.

A record number of newly elected freshmen women Democrats leapt to their feet and high-fived each other.

Sen. Kirsten Gillibrand, a New York Democrat who is running for the Democratic presidential nomination, flashed a thumbs-up with both hands.

‘You weren’t supposed to do that!’ Trump joked, patting himself on the back for presiding over ‘more women in the workforce than ever before.’

As the Democratic women began to take their seats, Trump again went off-script.

‘Don’t sit yet. You’re going to like this!’ he said.’Exactly one century after the Congress passed the Constitutional amendment giving women the right to vote, we also have more women serving in the Congress than ever before.’

Shouts of ‘USA! USA!’ rang out from both sides of the chamber.

Pelosi told reporters in the Capitol afterward that she enjoyed that part of the evening.

‘I liked when he acknowledged when it was the largest number of women,’ she said of his speech.

The night started off on the wrong foot when President Trump gave Pelosi, his official host for the annual speech, the cold shoulder.

He shook her hand when he arrived at the dais on the floor of the House and handed her a copy of the speech. 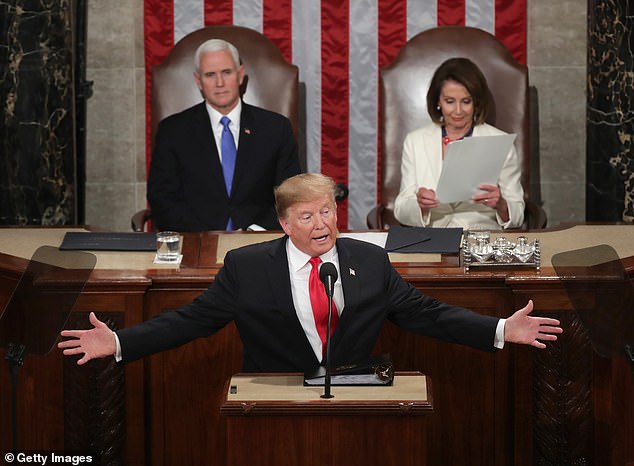 At other times she read along with the president’s remarks, holding up her print out of his speech in view behind him as he spoke on the dais before her 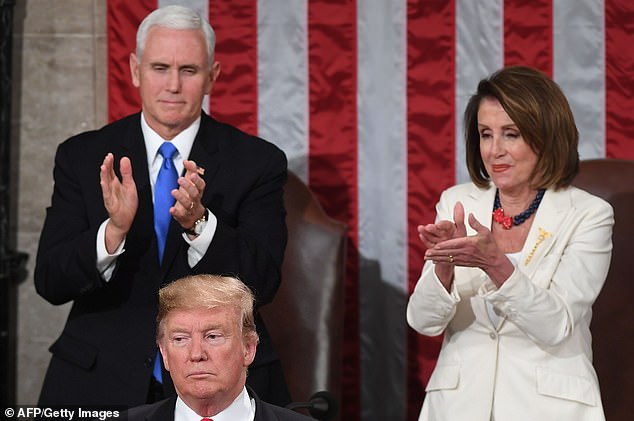 She did applaud some of his lines, particularly when he said the state of the union is strong 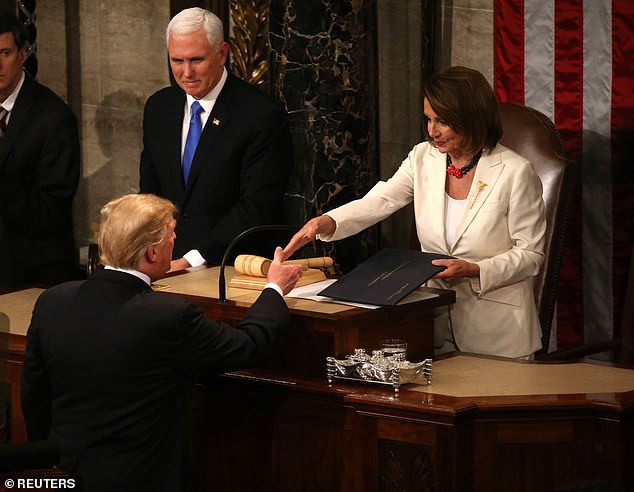 But it’s traditional for the speaker to introduce the president before an address to a Joint Session of Congress. Instead, Trump walked behind the podium and began speaking right away.

A senior House Democratic aide told DailyMail.com that Pelosi had planned to introduce the president.

President Trump ‘blew through the customary introduction by the speaker,’ the aide said.

The president also did not congratulate Pelosi on her ascension to the speakership unlike how George W. Bush did during his presidency when she became the first female speaker in American history.

The speaker had her remarks for the evening printed out and on the dais before her. She read off the paper when she ended the joint session of Congress convened for the speech.

Pelosi and Trump have had a tense relationship since the government shutdown that kicked off her speakership.

He famously walked out of their last face-to-face meeting when they tried to end the stalemate and reopen the government.

She canceled his original invitation to give the annual address. He retaliated by canceling her trip to Afghanistan to visit U.S. troops.

Pelosi emerged the winner when Trump reopened the government without funding for his border wall – meeting her demand to end the shutdown for negotiations on border security to continue.

Tuesday night was their first face-to-face meeting since then.