Rosie Huntington-Whiteley was showing off her eclectic sense of style on Wednesday, as she stepped out in New York rocking a quirky dessert-themed coat.

The 31-year-old supermodel looked effortlessly chic in a monochrome cover-up teamed with suede boots, as she headed into the city ahead of the much-anticipated New York Fashion Week.

Rosie was certainly dressed to impress as she exited the Greenwich Hotel, finishing her look with sharp-framed black sunglasses. 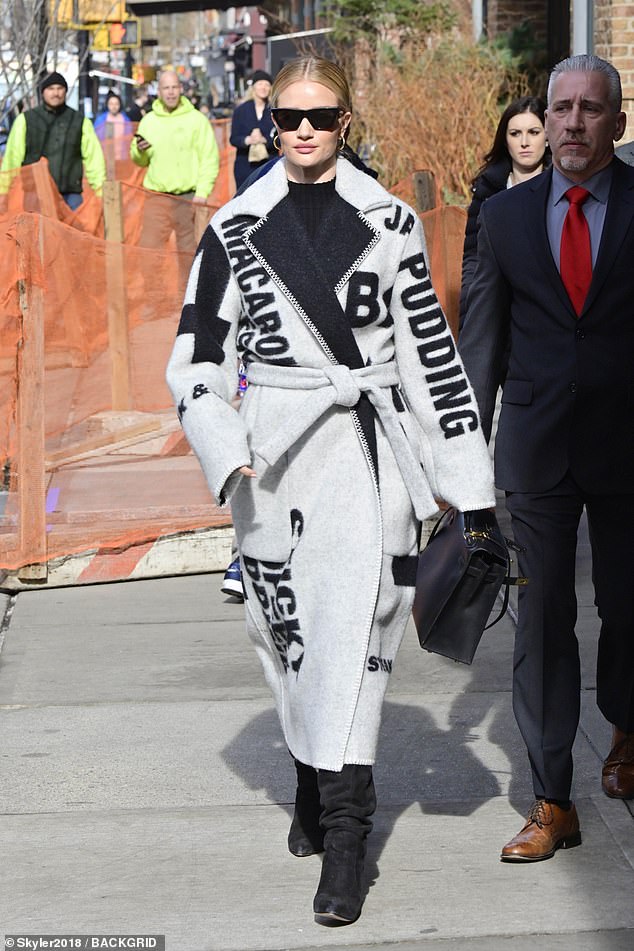 Looking good: Rosie Huntington-Whiteley was showing off her eclectic sense of style on Wednesday, as she stepped out in New York rocking a quirky dessert-themed coat

Rosie was certainly putting on a stylish display as she headed out into the city, sporting the low-key grey and black trench coat.

However – in an unusual twist – the cover-up was also emblazoned with the words Sticky Toffee Pudding along with the names of numerous other sweet treats such as the macaroon and the iconic 99 ice cream.

The star teamed it with an all-black ensemble along with her blonde tresses in a sleek low-bun, and accessorised the look with sharp-framed black sunglasses. 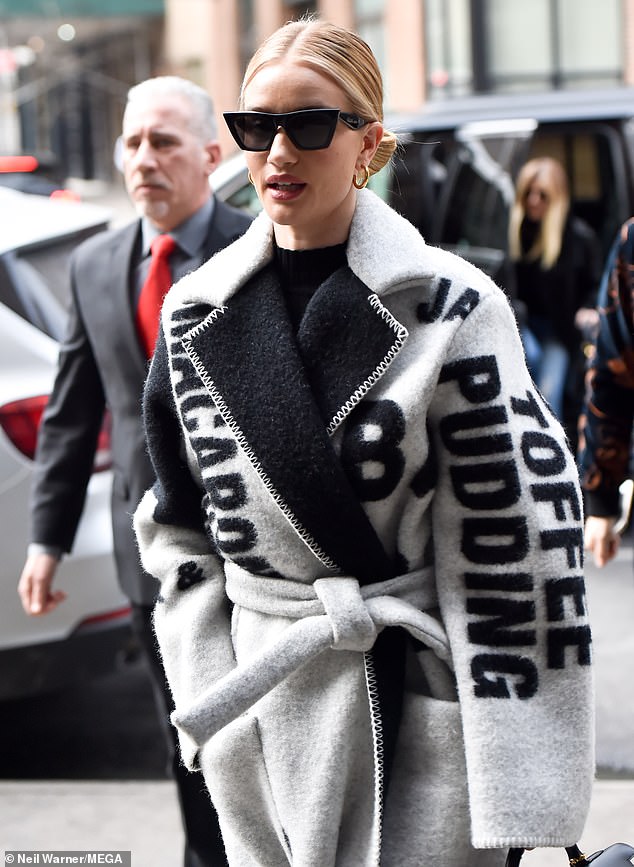 Glamorous: The supermodel, 31, made a bold statement in the black and grey coat emblazoned with the names of various desserts

Dressed to impress: Rosie finished her look with high-heeled black suede boots, and her blonde tresses pulled into a sleek low bun

Wrap up like Rosie in a coat by Céline

We find ourselves lusting after Rosie Huntingon-Whiteley’s outfit choices every time she steps outside!

Today, the actress rocked a statement coat by Céline, teamed with black accessories. It’s actually an old design that was released while the fashion house was under the creative direction of Phoebe Philo.

And it’s no surprise Rosie was keen to hunt it down! Featuring oversized lapels, tie waist and longline length, this coat is cosy and chic in equal measure. After all, who wouldn’t want a coat adorned with ‘sticky toffee pudding’?

If you are yet to treat yourself to a winter coat, now is the perfect time. Head straight to our edit of grey wrap styles in the carousel below. We’ve got our eye on MANGO’s wool number!

Rosie was seen out and about in the Big Apple ahead of the much-anticipated New York Fashion Week, which kicks off in the city on Friday.

She had told fans weeks earlier that she was on a mission to track down the coat, which was from the Autumn/Winter 2017 Celine collection and had sold out.

Luckily the partner of actor Jason Statham was eventually successful, as she took to Instagram to gush that she had managed to track one down. 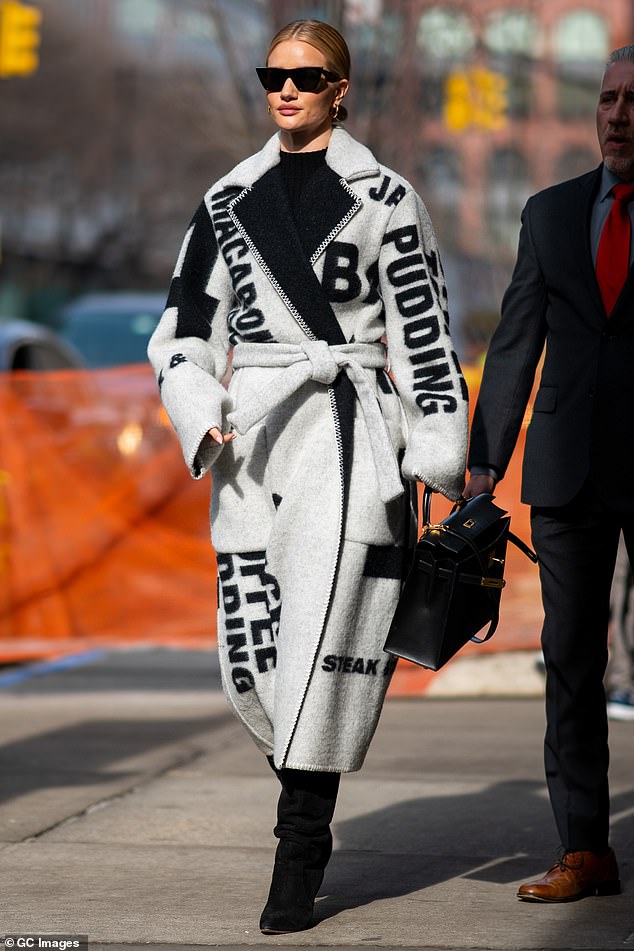 Quirky: Rosie had previously told fans she was determined to track down the Celine coat, which was sold out after first appearing in the Autumn/Winter 2017 season 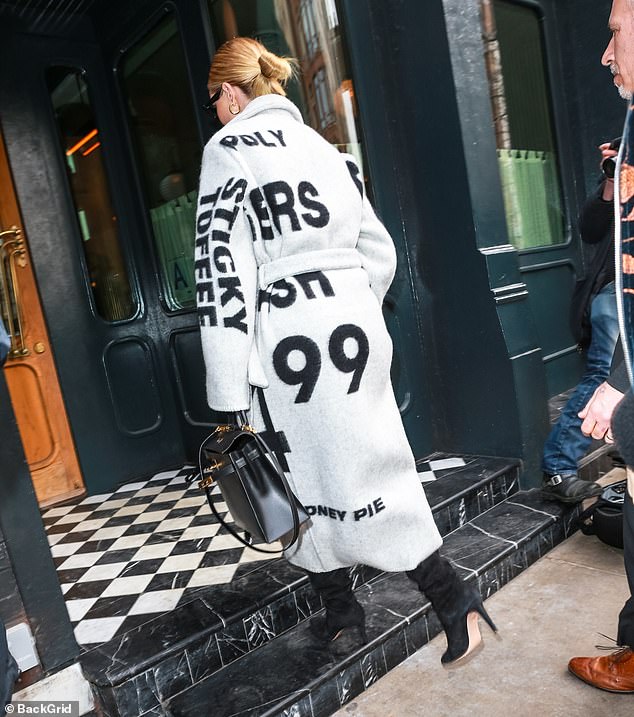 Success! Luckily the star recently told fans that she was able to find the coat thanks to a bit of help and was now proudly displaying it on her New York outing 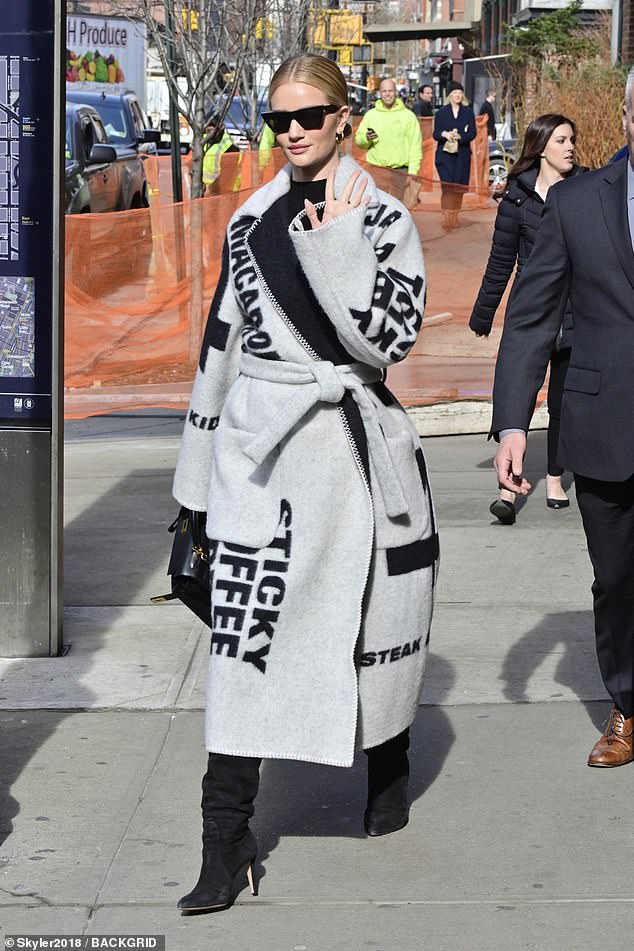 Smiling: The partner of actor Jason Statham finished her look with sharp-framed black sunglasses, and carried a structured black handbag

Rosie started modelling at the tender young age of 15, with her first modelling gig for Levi’s jeans.

She started dating Jason Statham in 2010, with the couple getting engaged in 2016 and having their first child, son Jack Oscar, in 2017. 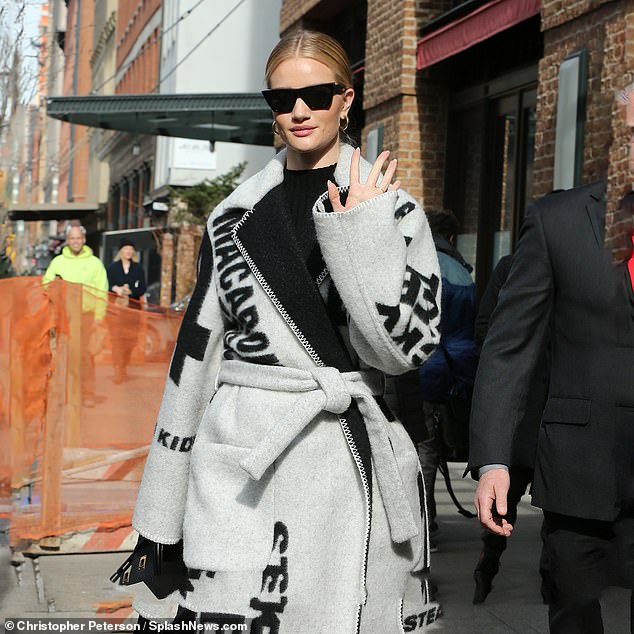 Chic: Adding the sophisticated aura of the look, Rosie pulled her blonde tresses into a sleek low bun with a dynamic centre-parting 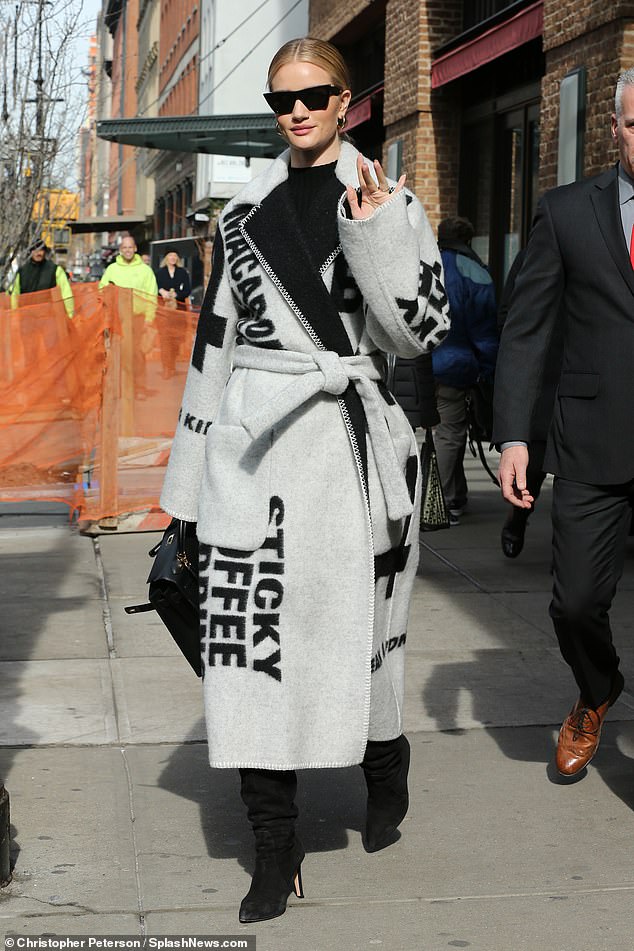 Runway-bound? It remains to be seen whether Rosie will be taking to the catwalk for New York Fashion Week when it kicks off on Friday

She also branched into acting like her longtime partner, playing the female lead, Carly Spencer, in 2011’s Transformers: Dark of the Moon.

Her only other role was in 2015’s Mad Max: Fury Road, where she played The Splendid Angharad.

Rosie is still one of the most sought-out models in the world, and tied for third place in Forbes’ list of the highest paid models of 2018, earning $11.5 million, tying her with Chrissy Teigen. 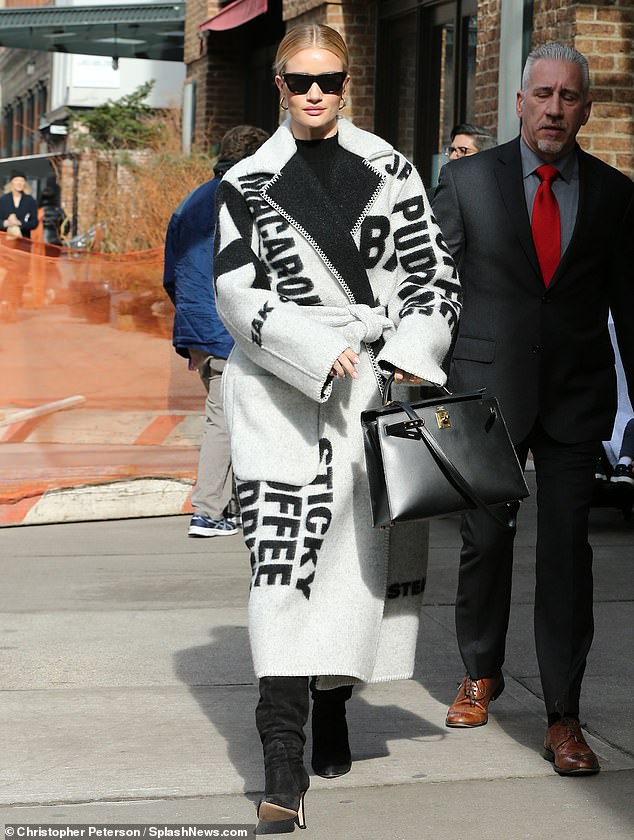 Gorgeous: While she kept jewellery to a minimum, Rosie was sporting a pair of simple gold hoops with her outfit

Micro superhero Ant-Man's antics gentle up an excellent sequel
Danniella Westbrook shows off her surgically-enhanced assets in a low-cut gown for UK Glamour Awards
Irina Shayk flashes her bra from beneath sexy silk suit as she continues to rule Milan Fashion Week
Heidi Klum flashes a peace sign in head-to-toe pink as she films Germany's Next Top Model in LA
Holly Willoughby enjoys a boozy skiing trip before showcasing her impressive skills on the slopes
Witney Carson of Dancing With The Stars calls Kim Kardashian's moves 'really rough'
Jason Derulo knocks Will Smith's teeth out with golf club... but it all was a hilarious TikTok prank
Mariah Carey says her older sister Allison 'tried to sell' her 'out to a pimp' when she was 12